I remember sitting in the audience at the Xbox Keynote presentation at E3 2013 watching the wind passing over the dunes of an alien world, kicking up sand and stone in its wake. I remember a hulking hooded figure lumbering heavily – yet almost effortlessly – across the landscape. I remember something stirring in me, crying out that this wasn’t just another game trailer. I remember seeing an all-too-familiar Mjolnir gauntlet emerge out from the folds of a tattered cloak, and watching a lifeless AI storage chip tumble from a hero’s hands. I remember a monstrous and ancient construct razing the surrounding rock when it rose from beneath the ground, representing a mystery that felt might take an eternity to solve. I remember losing my mind.

Fast forward to E3 2015 and I stand surrounded by colleagues and friends – family, really – in the 343 studio watching that same mystery stand at the threshold of revelation, as we finally showed off the Halo 5: Guardians campaign to the eager eyes and ears of the gathered gaming world. It’s been an incredibly crazy week for us, both for those brave men and women with boots on the ground in LA, as well as the scores of us back at 343 Mission Control in Kirkland. Here around these lore-laden lands, we’ll be having quite a bit to talk about over the coming weeks, as we begin to break down the myriad of details unveiled at E3. Some of those details will expand upon points quite obvious, while others might just clue you in on something gone completely unnoticed.

In the coming months, we’ll also be beginning to sprinkle in new and updated entries into the Universe section that directly pertain to updates and additions found or introduced in Halo 5: Guardians. While they won’t be live for a little while still, we thought it might be nice to give you a little sneakypeek of one of them, starting off with a new addition to the Halo story. Read on! 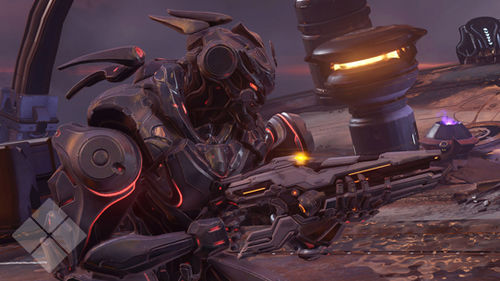 One of the most noticeable additions fans caught on to in the Halo 5: Guardians E3 reveals was the presence of an as-of yet-unseen Forerunner construct, the Soldier. Sometimes referred to as “Promethean Soldiers” due to the operational origins of particular variants, these combat constructs have a little-known, but intriguing, history. Here’s a first look into their past…

During their war with ancient humanity millennia ago, the Didact employed the use of Armigers – bipedal combat platforms that proved incredibly useful for raiding ancient human warships, particularly when attempting to infiltrate the often-more confined spaces of human vessels.

Following the conflict, after the Didact had entered into exile during the ecumene Council’s diminishment of his rate, the Forerunners found themselves dangerously underprepared for the Flood’s return. In order to bolster the empire’s defenses, the Master Builder recommissioned the production of the Armigers to support the ranks of both Builder Security and the waning number of remaining Warrior-Servants. The Soldiers are one such example of these combat platforms, with multiple types used by various factions within the Forerunner ecumene.

While most were originally expended in the fruitless war against the Flood or compromised by the logic plague, some were secretly left to guard key Forerunner sites in the ages following the firing of the Array. Their reappearance with the Guardians indicates the secret of their manufacture has once again been uncovered, and as humanity continues to try and reclaim the vestiges of the Forerunners’ dominance, the reawakening of these constructs and others like them cannot be taken lightly by the UNSC.

Many of you will realize that it’s not the first time you’ve encountered the name “Armiger” in Halo fiction, specifically those who have already picked up Halo: Hunters in the Dark, which released just this past Tuesday. Once fans have had a chance to pick up the novel for themselves and digest it, we’ll be revisiting right here in Canon Fodder for a closer look, as has become customary. And in regards to the Soldier units themselves, there might still be a few details yet to come for those who are paying careful attention. 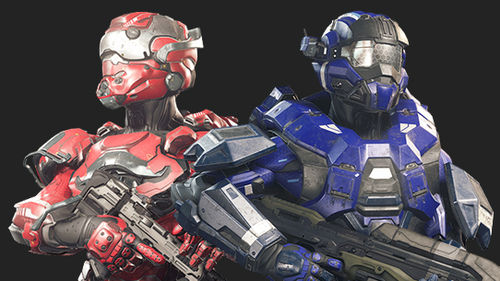 Part of our recent E3 media haul included renders of a couple of new additions to the Halo 5: Guardians multiplayer armory, including one with a very clear lineage that reaches back to the darkest hours of the Covenant War. These versatile and powerful GEN Mjolnir variants - BREAKER on the left in red, and NOBLE on the right in blue - are just a few of the options you'll have to choose from when Halo 5: Guardians hits this October. I figured, hey we’ve got these awesome images available on Halo Waypoint, but where’s the lore, right? Well, look no further. And don’t forget in case you missed it last week, we took a closer look at the armors worn by Blue Team and Fireteam Osiris in Halo 5: Guardians. On to the lore!

Helmet: The BREAKER's core systems are based on IMC's industrial spaceworker ensemble. 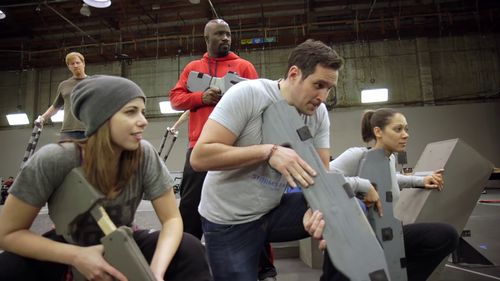 If you are looking for a more visually-engrossing behind-the-scenes experience to how the recent Halo 5: Guardians E3 presentation made its way from concept to completion, you’ll definitely want to check out the new series of The Sprint. Many fans remember the first run of the popular peek behind the 343 curtain, where the development of the Halo 5: Guardians multiplayer beta was put on full display. This time around it’s the Road to E3, and you’ll get to go behind closed doors to get a glimpse of everything from mission design to mocap sessions to see how the E3 campaign and Warzone reveals were brought to fruition. Trust me, you don’t want to miss this. It’s available right now on the Halo Channel, and will also be available on YouTube beginning this weekend.

In addition to The Sprint: Road to E3, story fans will find a number of pieces on the Halo Channel from our E3 coverage, from reliving the campaign reveal from the Xbox Keynote to interviews with developers from the show floor. Make sure you soak up every informational morsel!

And with that, we bid you a safe and wonderful weekend, as well as a very Happy Father’s Day to all the Halo-loving dads out there. Hope you all have had just as exciting and fantastic week as we have. Trust us, the march towards October is only going to get more interesting…

Until next week… Live well, play Halo, and always, always, Hunt the Truth.

ONI Prowlers are UNSC stealth spacecraft used for strategic reconnaissance, surreptitious transport of high-value individuals, and covert observation. They can also participate in fleet actions, albeit in a support role.