Welcome back, fiction fans. Last week, we talked about the community’s heroic effort to assemble the newest official key art for Halo 5: Guardians and provided some clarifying calm to a Covenant storm. This week we’ve got a special treat that should prove a marvelous morsel to our novel-gazing lore buffs. Plus we’ll have another look at #HUNTtheTRUTH as well as new Universe entries to take a gander at. Read on! 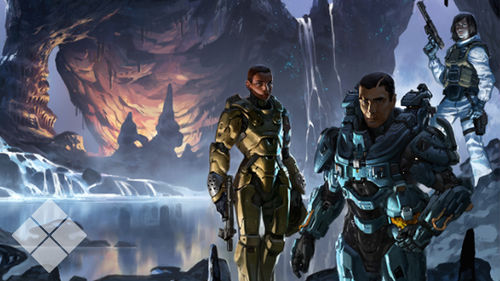 In partnership with our fantastic friends at Simon & Schuster, we’re proud to reveal both the cover art and the book description for Halo: Last Light, a new novel by New York Time Bestselling author Troy Denning. Want to see the bigger picture from cover artist Kory Hubbell? Just click the image to the right. Oh, and you might want to be ready to wish your current desktop a fond farewell. So what adventure awaits you beyond its curious cover? Glad you asked…

It is 2553, and the three-decade long Covenant War that defined a generation has suddenly drawn to a close. Yet, in the remotest parts of human space, tensions remain that threaten to overflow into another full-scale conflict. Beneath the surface of the planet Gao lies a vast cavern system renowned for its therapeutic effects and rumored miraculous cures. But now Gao natives are turning up brutally murdered down there – violent acts that happen to coincide with the recent arrival of a UNSC research battalion protected by Spartan Blue Team, led by the renowned Spartan-II Fred-104.

Maverick detective Veta Lopis of the Gao Ministry of Protection is only trying to do her job as the Special Inspector assigned to catch a serial killer – one who is possibly hiding within the Spartan ranks – but she never anticipates the situation spiraling out of control into an all-out crisis. When Gao is revealed to harbor ancient Forerunner technology that could solidify the UNSC’s military supremacy for centuries to come, Insurrection loyalists within the planetary government will do anything – even align with a vicious faction of what remains of the Covenant – to ensure that never happens….

For those of you who are having trouble combining “Halo” with ideas like “murder mystery”, trust me, some pretty cool surprises await you in the depths of Goa. Whether they be surrounding the mysteries of the planet itself, or the brutality of an Insurrection faction with unlikely allies, Halo fiction fans will get to see Blue Team in a brand new light. Halo: Last Light is slated for release on September 7, 2015. You won’t want to miss it.

If you look up the phrase “In over your head” in the dictionary, and don’t see a picture of Ben Giraud, then something is wrong with the world. Then again, the same might be true if you haven’t been following the exploits of our 26th century war journalist and main protagonist of the #HUNTtheTRUTH campaign. This time, it isn’t just the Office of Naval Intelligence Ben has bearing down on him… it’s his own friends and colleagues. I guess that’s what happens when you take your findings on what could be one of the biggest conspiracy of your time, and release them to the galactic public. You know, another day at the office. In one of the most tension-packed episodes yet, Ben begins to realize that he’s got far more people to answer to than he ever thought possible. Catch #HUNTtheTRUTH on tumblr, Halo Channel, and iTunes.

Also, if earning a cozy little place in the Halo fiction seems like it might be kind of a cool thing, you might want to check out the currently parallel-running “Hunt the Signal” contest. Lots of details can be learned here in a cleverly curated community thread on our very own Halo Waypoint forums. If you think you've got what it takes, join the hunt at HuntTheSignal.com!

And with that, we sign off for another spell. Thanks so much for joining us, everyone. Also, we hope you all are excited to see more of Halo 5: Guardians at E3, as we’re certainly excited to show it to you.

Until next week…Live well, play Halo, and don’t ever, ever record Petra Janecek when she’s unaware you’re doing so.

The Covenant destroyer is a vessel intended specifically for pursuit and attack, although it can and has been used in lieu of cruisers and carriers for occupation purposes.