In our aforementioned launch blog, we outlined some of the biggest details on Johnson’s awesome new battle-hardened units. The Sergeant Major has always known how to deliver the big guns when they’re needed the most, but this time he’s upped the ante with a myriad of mechanized mayhem. But while the launch blog covered some of the most important gameplay implications, it didn’t dive into much of the all-important backstory behind many of these sweet new tools of destruction. Fortunately for you, Luke, I am your Fodder. For those of you who haven’t taken the chance to dive headlong into the associated Phoenix Log codex entries accessible right within Halo Wars 2’s campaign menu, we’ve got you covered right here – with perhaps even a bit of bonus coverage.

Let’s get this out of the way first. Canonically, Sgt. Johnson is still deceased. He dead. Super ded. Like, not even falling into the Domain would bring him back. Well, probably. Pretty sure at least. And remember, the multiplayer in Halo Wars 2 isn’t a canonically-wrappered simulation situation – it’s just good old fashion, fun-havin’ multiplayer. It gives players the full capability to treat it as a battle simulation for sure, but having the multiplayer exist outside of all that also gives us the opportunity to do awesome stuff like have Avery Johnson and John Forge join the fray. At any rate, here’s the Phoenix Logs fiction for Johnson’s big and deadly unit. 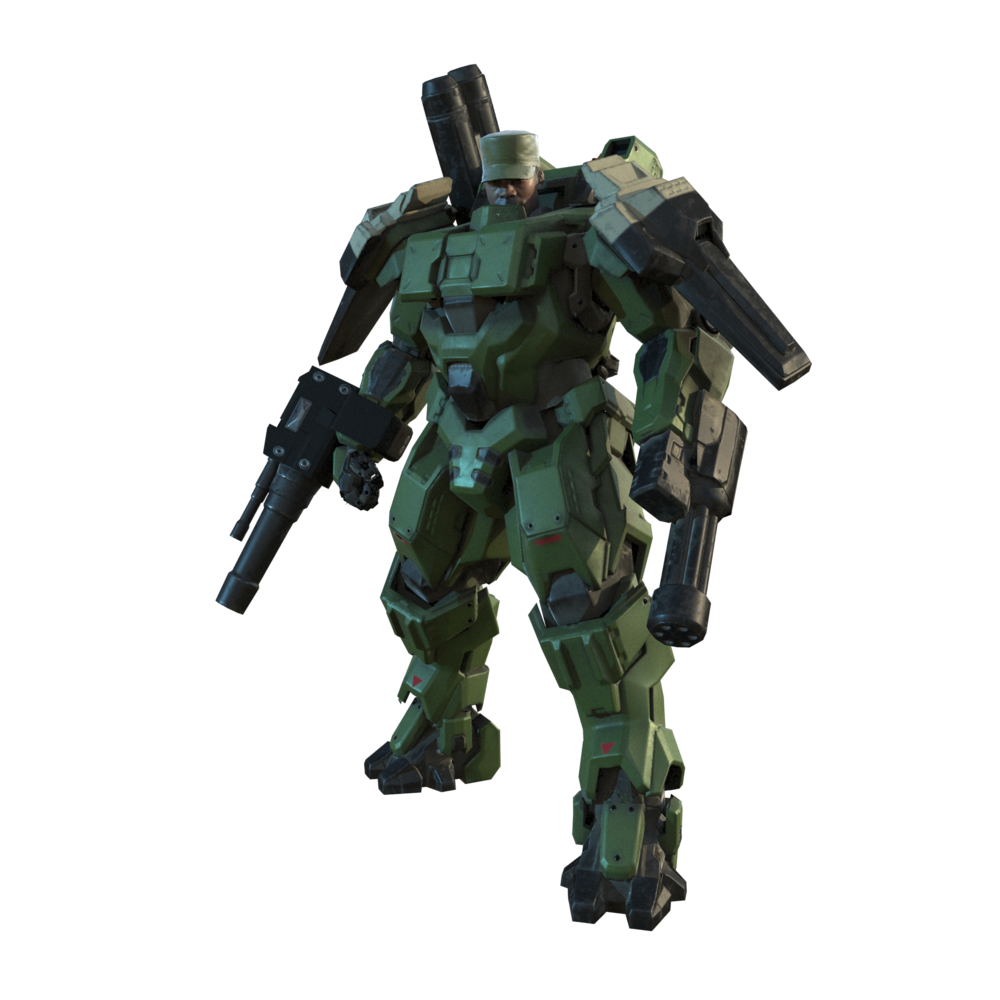 When Sergeant Johnson joined the Corps they didn't have any fancy-schmanzy power armor, but he's a quick learner. He drops onto the Ark in the "Green Machine," a bipedal weapon system custom-fitted with an array of miniguns, phased-plasma fusils, sonic blindwolf repellers, repair beacon pods, and fast- regen energy shields. He keeps a sharp stick handy as a backup weapon. The energy shielding rapidly regenerates after it hasn't been hit for a few seconds, which plays well with Sergeant Johnson's preferred tactics of hit-and-run raids and well-timed combined-arms strikes. The suit's repair beacon ability heals up to ten nearby allies with constructor beams tuned to a pleasing Marine Corps- approved green color.

The suit can be upgraded in the field, further enhancing the Green Machine's killing power. The Gauss Chaingun upgrade adds specialized high- power ammunition while the Beacon Shield pairs the repair beacon with a bubble shield, reducing incoming damage for those inside the repair radius. And last—but certainly not least—the suit can be upgraded with a Smart Missile pod for dealing with pesky nuisances at long range. Why doesn't he wear a helmet? Well, would YOU hide behind an armored faceplate if you had Sergeant Johnson's rugged good looks?

Keen-eyed fans will note the lineage between this upgraded suit and the one seen in the “Prototype” animated piece of Halo: Legends. Looks like maybe, just maybe, not all information from Algolis was lost when the colony fell to the Covenant.

The Colossus is a superheavy vehicle unit which can be deployed by Sergeant Johnson in place of the Scorpion. It is relatively slow, but fitted with a devastating arsenal, capable of taking down almost any foe. The Colossus' primary weapon is a long-range heavy railgun, a massive weapon originally designed for installation on fortified structures. While the rail cannon can only target ground units, its autocannon has an all—environment engagement profile. After upgrades the Colossus can use Stomp, sending out a shockwave that stuns and damages enemy ground units.

The Colossus is a next—generation exoskeleton combat unit designed by Materials Group and Hannibal Weapon Systems for the UNSC Army. Isabel retains its manufacturing templates from her supply-chain training on Earth, though manufacturing these massive combat machines represents a considerable burden on the Spirit of Fire's supplies. Sergeant Johnson claims to have acquired the materials for his Colossus units via the classic Marine Corps logistical expediency of 'borrowing' equipment that isn't nailed down [or couldn't be pried free], but his actual source for these machines is a mystery wrapped in an enigma, protected by shield generators and several tons of Titanium—A armor plating.

The Colossus shares an interesting design kinship to the “mega-Mantis” Mk. II (D) ADS seen aboard the CAA 'Heavy Burden in the Halo 4 map “Adrift,” but is definitely not the same vehicle. However, it does finally give players a chance to control a bipedal mech of similar size against enemy forces. 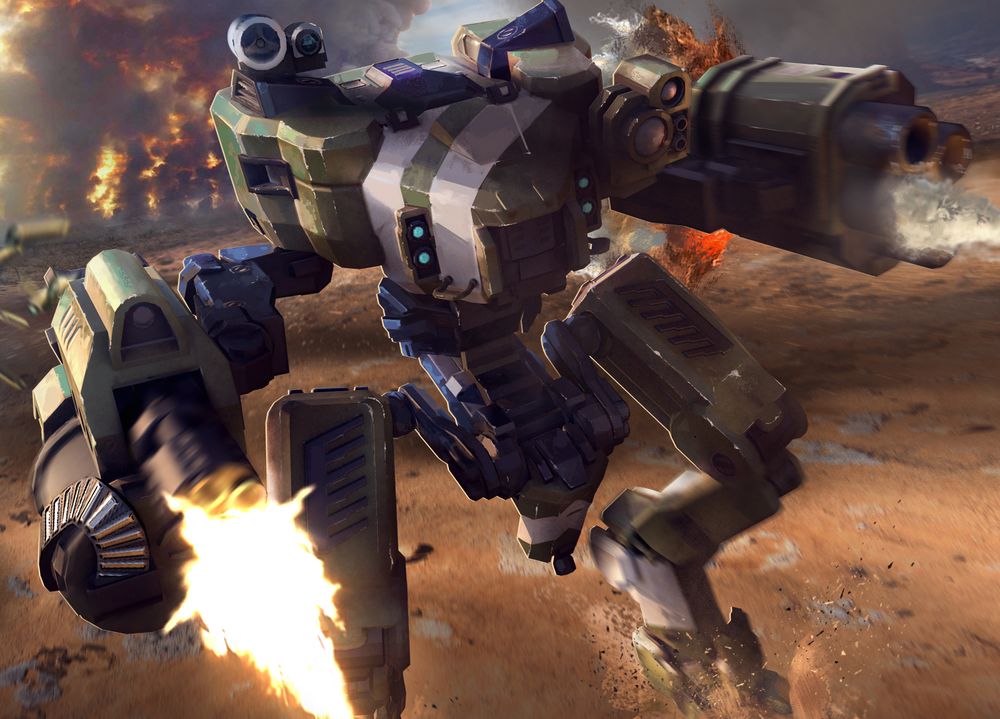 The Mantis is a combat vehicle used in a number of different configurations by the UNSC and licensed security forces. The Mantis replaces the Warthog in Sergeant Johnson's force. Its default weapon is a chaingun, which can target both ground and air targets. The Missile/Shield Requisition upgrade increases the number of missiles the Mantis can fire and adds energy shielding, while the Gauss/Designator Requisition upgrade replaces the conventional chaingun with a gauss repeater and adds a networked target designator. The target designator allows the Mantis to "paint" a single unit and coordinate attacks using the local battlenet, increasing all damage the target takes from friendly units. Groups of Mantis walkers will smart target their designators.

Highly mobile, well-protected, air-droppable, and reconfigurable, the Mantis represents the state-of-the—art in infantry walkers. Mantis units were stationed at the Henry Lamb Research Outpost for site security, but many were destroyed in the initial Banished attack. Well aware of their combat potential, Isabel has begun producing a modified version of the Mantis for the use of Spirit of Fire's ground forces, with adjustments to reuse parts produced for the Cyclops and Colossus. While capable, these units lack the neural interface control systems installed on contemporary UNSC models; a necessary concession due to the Spirit of Fire's older manufacturing technology.

Oh, and before we put Johnson away to move onto other pressing matters, community stalwart and fiction freak Hidden Xperia put together a rather awesome look at the good Sergeant’s intriguing – and somewhat shrouded – backstory. It’s definitely worth giving a watch, so, well… watch it!

Well, that does it for us this week. If you're gearing up for school finals, good luck! If you're already a working stiff, have a great (hopefully) long weekend! If you don't fit into either of those categories then, well, we love you too. Ciao!

Until next time…Live well, play Halo, and remember to smile – while you've got something to smile about.