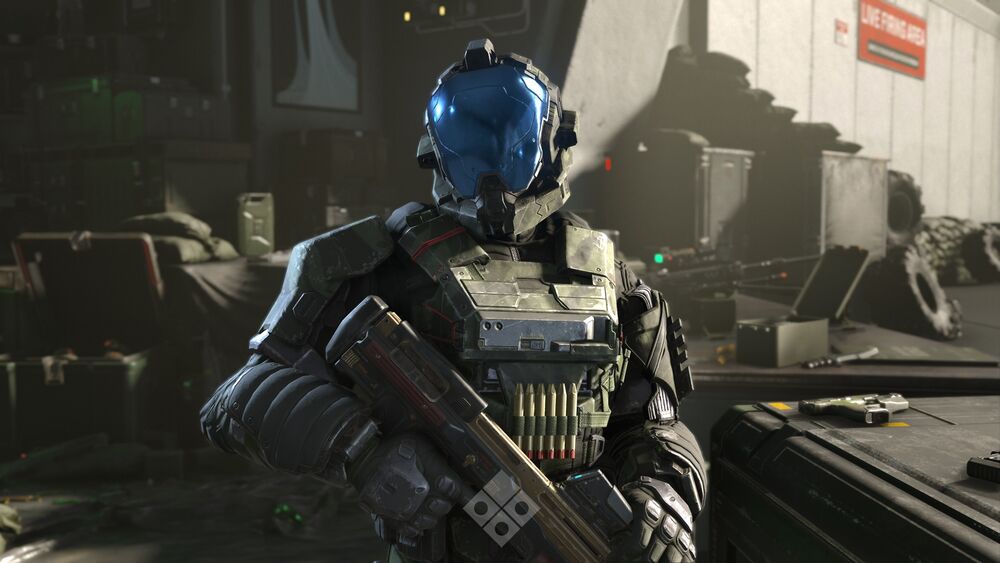 Welcome to the first of not one, not two, but three Canon Fodders coming your way over the next few weeks!

Alpha Pack, the latest narrative event for Halo Infinite, has released; we've promised an encyclopedia-style look at elements of the restored material from 1999-2004, as detailed in our recent Cutting Room Floor blogs; and then, finally, we're getting ever-closer to the release of Kelly Gay's Halo: The Rubicon Protocol on August 9.

Let's begin the three-part fictional feast with a look at Alpha Pack, some new old ships from Broken Circle, and another round of community Q&A.

Season 2: The Story so Far…[modifier] 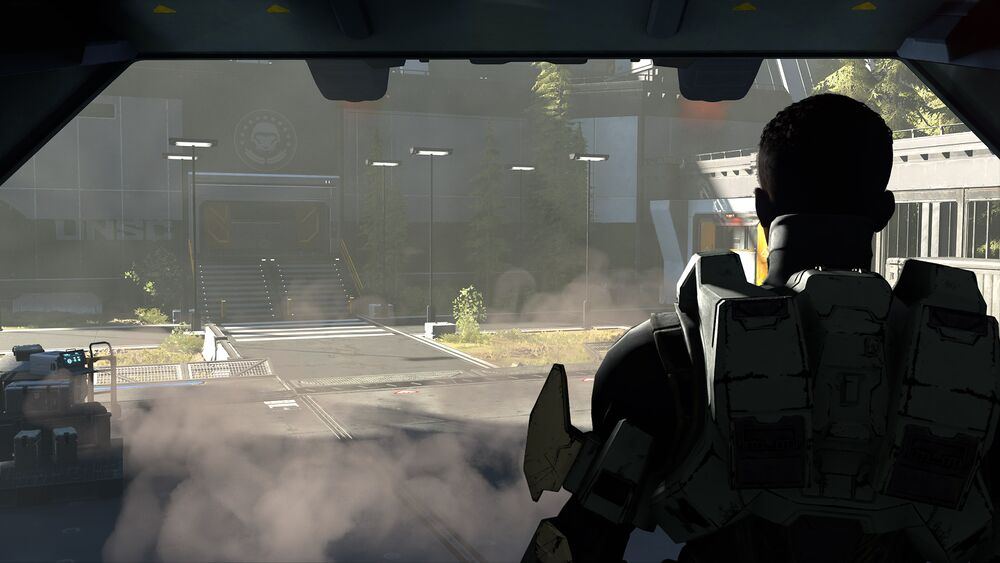 When we launched Halo Infinite last year, you were introduced to Laurette Agryna, Spartan Commander of the Avery J. Johnson Academy of Military Science. And that's where you came in.

In the wake of Laconia Station's destruction and the loss of at least seventy-six Spartans who stood opposed to Cortana's rule, a new generation of SPARTAN-IV recruits were deployed to a hidden frontier world to continue their training under Commander Agryna's watchful eye.

After losing contact with the UNSC Infinity following the devastating ambush by the Banished at Zeta Halo (and the disappearance of the ring itself) in December 2559, Agryna's resolve to regroup and rebuild only grew stronger. As part of the next chapter in the Spartan legacy, you must sharpen your steel to become the hero the galaxy needs—to endure, and to inspire hope. Housed within the safety of the Academy's walls, a clear path seemed to lie ahead… until the facility received some unexpected guests, that is. 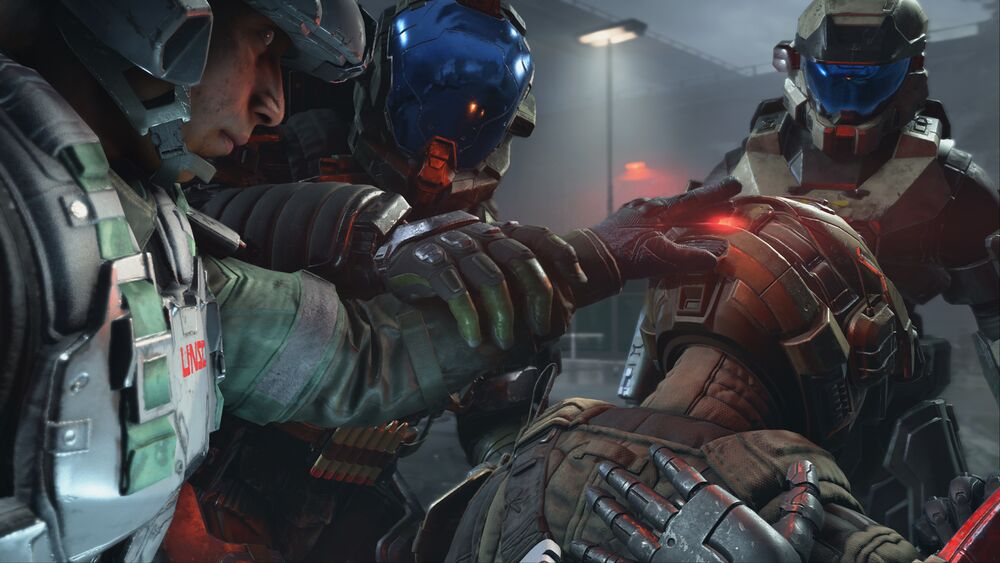 Deploying from a stolen Phantom, Spartan Dinh was in need of immediate medical attention after containing a dangerous new foe within his armor systems—a Banished AI known as Iratus.

Eklund informed Commander Agryna that Iratus appeared to be guarding intelligence about Banished operations, so the Spartans' mission was clear: get Iratus out of Dinh's head and somehow force the enemy construct to spill everything it knows.

During “Interference,” the first narrative event which kicked off the current Lone Wolves story, Commander Agryna ordered the Spartans to enter a simulation of the facility on Camber, serving as bait to entrap Iratus within the Academy's wargames system network where they could not only learn more about what the Banished are guarding so closely, but perhaps also more about the capabilities of Iratus himself. 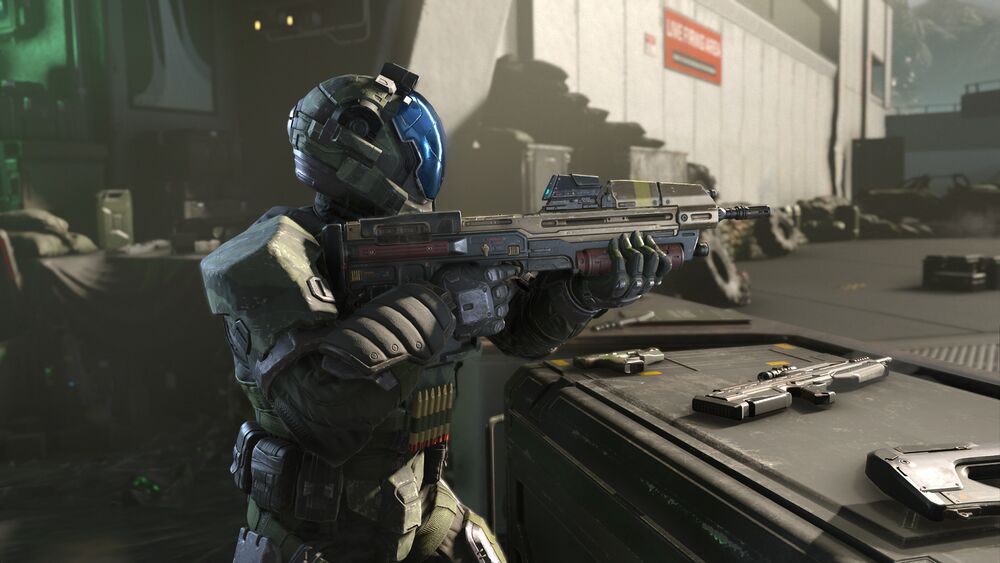 After the aforementioned mission seemingly proved to be successful, the Alpha Pack event centers on Sigrid Eklund, who is grateful for what you have done for Spartan Dinh, but leery of the tasks that still lie ahead.

In her experience, a Spartan must be able to operate at peak efficiency both as a member of a team, or as an isolated element—surviving on instinct and expertise alone.

A Spartan must be the master of any weapon, the pilot of any vehicle, and be able to adapt to any situation that presents itself. The battles Spartans experience to live up to their battlefield legend leaves its marks, and that's what RAKSHASA represents: lived history, a series of hard choices, and the knowledge that when you fall somebody else will pick up the pieces of what's left.

With the two-week Alpha Pack event comes a free Event Pass containing ten new cosmetics for you to unlock for your RAKSHASA armor core. And, well, what's a new armor core without some cool armor lore?

During her time as a Spartan, Sigrid Eklund has compiled a journal that details her exploits and encounters, as well as the equipment she's come across while out in the wild. Given the current state of things, she has seen fit to bequeath a select few pages of her gathered knowledge to you.

These pages detail the MORRIGAN helmet, the UA/CMA SN5 TYPE 11 shoulders, and the Trapmaster's Map device. 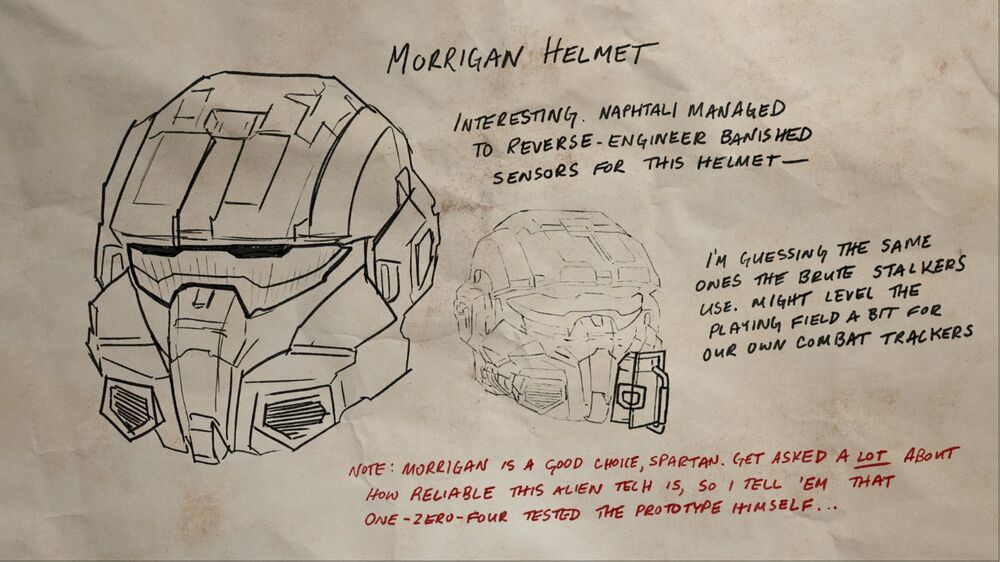 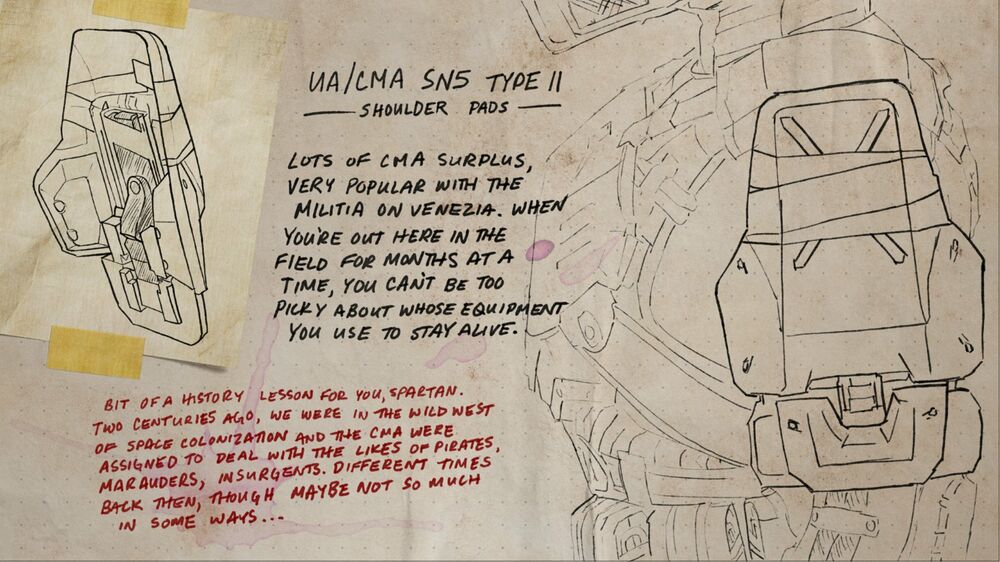 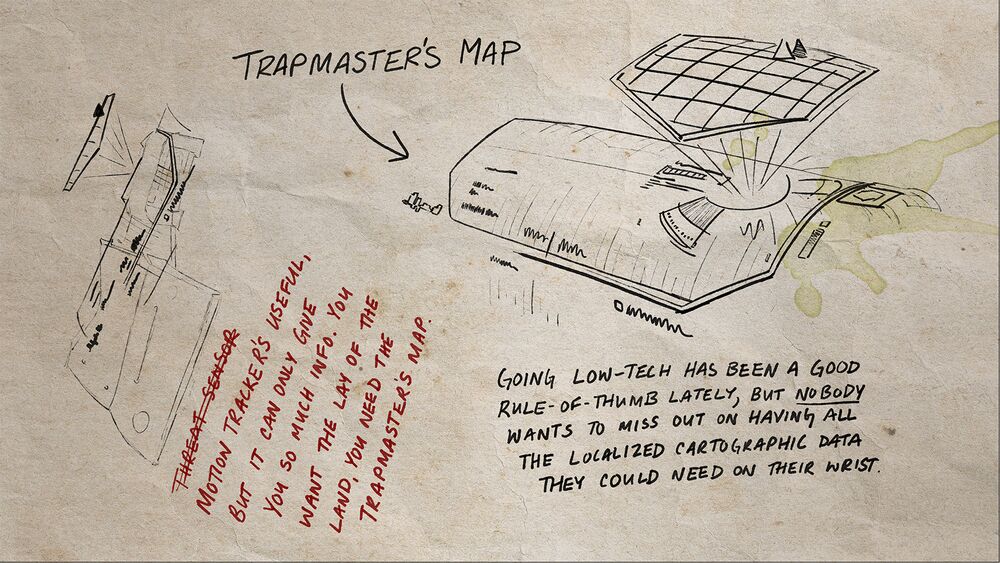 Over the course of Season 2 of Halo Infinite, we've been dropping pieces of intel which are much like historic Waypoint data drops from the past that you may remember (the Eleventh Hour Reports, content from the Halo loot crates, and so on). As with those aforementioned examples, these latest items are often excerpts of conversations and communiques which provide some insight into various peripheral elements of the Lone Wolves story.

These can be viewed in-game from the Message of the Day carousel in the main menu and in the STORY & INTEL section of Halo Waypoint's seasonal hub.

Our first intel drop was a conversation between two Lux Voluspa representatives concerning the nature of the breach they suffered, the Jiralhanae seemingly having learned that humanity has expanded its neural matrix donor pool for the creation of artificial minds to other species as well.

The second intel drop is a communique sent to Commander Agryna regarding Iratus, isolating viable instances of the AI for replication and use by select SPARTAN-IV operatives in the simulation (or, more simply, this helps explain “how” we are able to equip Iratus as our personal AI in Halo Infinite's multiplayer). 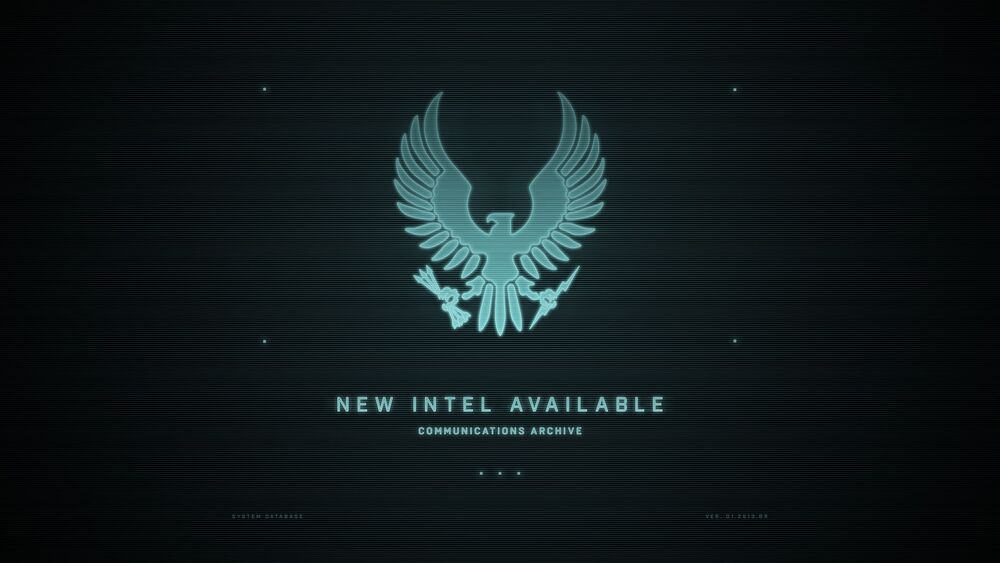 Jun, I've taken a look at your recent recommendations and feel that Spartan Eklund would be an ideal candidate for this next undertaking we spoke of. Her performance while attached to Fireteam Crimson was nothing short of extraordinary, and while the results of BELLINGHAM and LATE TAXI were certainly group achievements, I'm confident her skill set can produce similar gains in more "isolated" endeavors. We'll sort out the details this week and get them sent over.

Something I really love is when the covers for Halo media tell their own story and get the wheels of speculation turning.

Halo: Primordium is a great example of this, depicting Zeta Halo from a ground-level for the first time all the way back in 2012, with some interesting-looking, undeniably Sparth-drawn spacecraft (which the Halo Encyclopedia confirmed were indeed Falco-class pods, a type of Forerunner evacuation craft that Bornstellar-Makes-Eternal-Lasting used to escape the cataclysmic battle at Maethrillian at the end of Halo: Cryptum).

But that's not the cover we want to talk about today. No, we still find ourselves getting questions about the craft seen on the cover of another book… and today, well, you've been waiting patiently for the better part of eight years, so let's give you an answer.

Let's talk about the ships on the cover of Halo: Broken Circle. 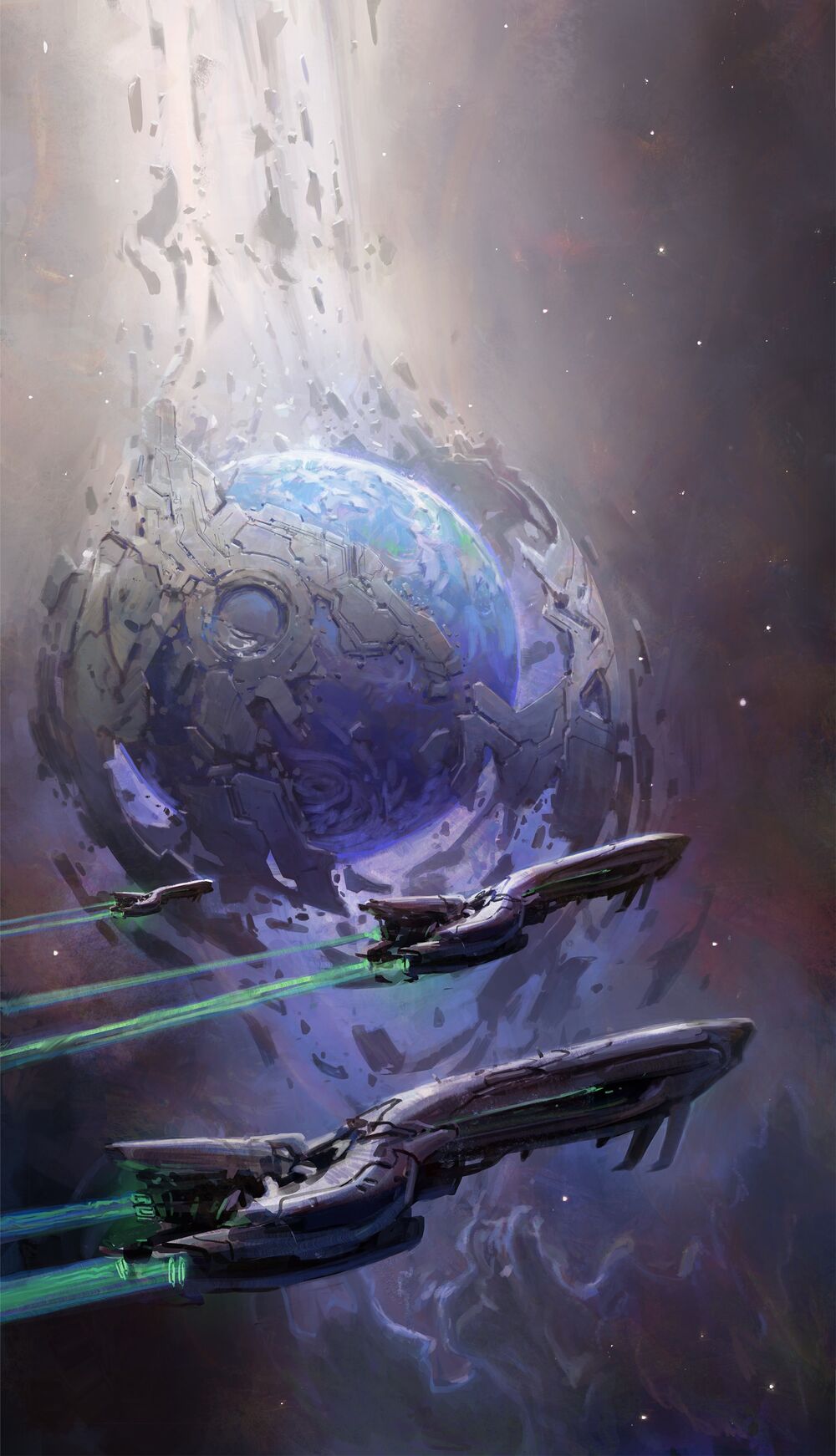 In the early years of the fledgling Covenant empire, meticulous attention was paid to the delegation of authority and oversight across every area of societal and military domain, with both founding species eager to find advantageous common ground while also retaining elements of political influence and cultural autonomy.

The Useumru-pattern voidpiercer however was a joint design of both Sangheili and San'Shyuum origin, one of the first truly collaborative engineering efforts between the newly united species.

As the Covenant's military and transportation infrastructure was still being formulated, the voidpiercer was designed with a broader operational scope in mind, with less focus on the deliberate specialization of other ship designs that would follow. The Useumru-pattern craft's design process also acted as a crucible to test the ability of the Sangheili and San'Shyuum to cooperate on large-scale engineering efforts—the fruits of which proved immediately vital during the complex construction of High Charity itself.

You'd have to ask their parents!

CJtheDJ52: How could the Endless be imprisoned for surviving the Halo Array? Wouldn't the Rings going off mean there would be no Forerunners left to imprison them?

So, this question leads us to a really interesting little time period in the Halo universe's fiction.

The Halo Array was ignited by Bornstellar-Makes-Eternal-Lasting, then known as the IsoDidact, who travelled to the Neoteric Ark as their war with the Flood entered its endgame. Entire solar systems had been designated “burns,” completely overtaken by the parasite; the logic plague had become a galaxy-spanning pandemic, subverting countless artificial intelligences; esoteric Precursor star roads were reawakening from dormancy, many converging on Path Tolgreth (the Milky Way) from the Large Magellanic Cloud; time and space were themselves described by the Ur-Didact as being “sick” in the very presence of the Flood.

When Bornstellar arrived at the Ark, situated outside the galaxy, he was not there alone—members of various rates were also present, many of whom were working on the Librarian's plans to preserve indexed species and reseed them after the firing of Halo.

These Forerunners survived the cleansing of the galaxy and spent the next century enacting their penance, fulfilling the final stage of the Conservation Measure, and ensuring that the path ahead they had laid out for the future would come to fruition.

You can learn more about this pocket of time in Halo: Rebirth (available here as a free PDF!) and Halo: Fractures (specifically “Promises to Keep” and the final coda at the end of the book). 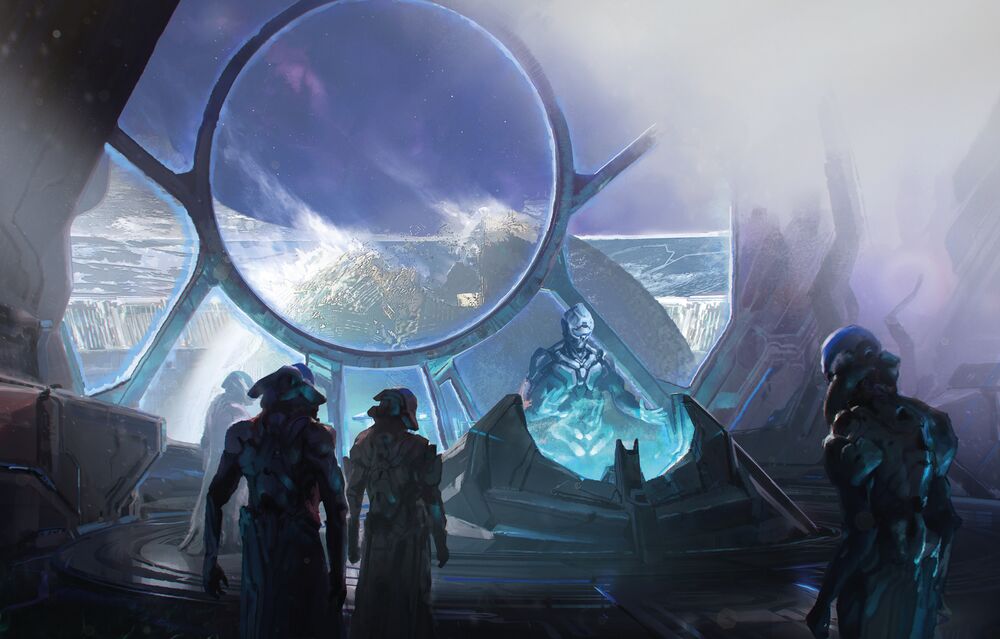 TheEld: Why doesn't Lasky mention Zeta Halo in Halo 4 when he talks about the UNSC's presence on or around various Halo rings that have been discovered?

CBO0tz: Do Condors keep their pilots and passengers in some form of cryo-stasis while in slipspace transit?

Condors generally do not make trips of such a length that would require cryo-stasis.

And that'll do it for this issue of Canon Fodder. Remember, we've got two more coming over the next couple of weeks, so it won't take too long to resume your fictional feast.

Next time, we conclude the Cutting Room trilogy, which is going to be a real treat! Until then, be well, jump into the Alpha Pack narrative event, and go make your best in-game RAKSHASA-themed Fred-104 cosplay!