Salutations, story supporters! It’s great to have you back for another universal update. In case you missed it, last week we dove a little deeper into the Warzone wild, and pulled the curtain back a bit on the Warzone Boss experience. If you want to know a bit more about the fictional setting for these deadly simulations, give it a read. This week we’ve got couple of cool new encyclopedic entries in the Universe section, and we hear from the community on what some of your favorite Spartan armors are. Mind the gap, and let’s make the jump!

Mind if we bug you?[modifier] 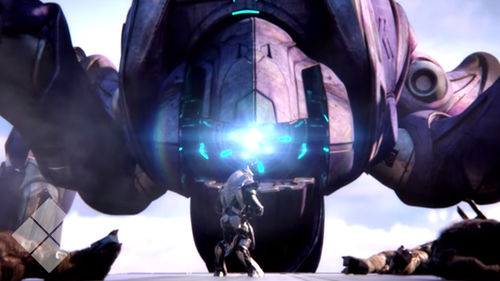 This week, you’ll notice that one of our new articles is a formidable foe, the Scarab. The deadly diggers are a Halo fan favorite – and for good reason! The Halo fiction is vast, but even the largest set pieces and smallest background details are often closely connected. For example, did you know that there were at least five Scarabs deployed by the Prophet of Regret during the Battle for New Mombasa? This is a detail from the Halo: Evolutions short story “Palace Hotel” (written by the evergreen Robt McLees) that even some of the most meticulous fans might miss. In case you’re wondering, the Scarab you see in Halo: Spartan Strike’s simulation just might be one of these rampaging machines that the Chief hadn’t gotten around to blowing up yet! 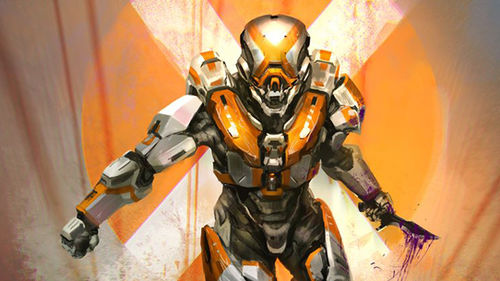 Last week we introduced a new community-based feature for Canon Fodder that you’ll see appear on these pages every so often. In our first go around, we took to the Halo Waypoint forums and asked about your favorite Spartan armor designs. Needless to say, our community is just as passionate about the Mjolnir as they are about the mission! We pored over the seven pages of replies and pulled a diverse selection to share. Of course, so many of you had awesome answers and opinions, so definitely take the time to check out the thread for yourself to view them all. Personally, my own favorite is the LOCUS variant. The moment I laid eyes on its vengeful and visorless visage, I was in love. The artwork you see to your left is part of a piece done by incredibly talented artist and mega-huge Halo fan, Garrett Post - though many might know him in the greater Halo community as "TD Spiral." If only there was less black ink slathered across the mission reports this set has seen... But enough about me, let’s see what you had to say!

GRIM: What are your favorite Spartan armor designs, and why?

DilDev: Halo 5's Helioskrill armor, definitely. I definitely like the aesthetic, but even more so I like what that armor represents in terms of lore. That a Sangheili was allowed to work on MJOLNIR armor speaks volumes of the trust that has been built and is still being built between the UNSC/UEG and Swords of Sangheilios. I find the Arbiter design to be very fitting in this sense since 'Vadam has turned the mantle into a more diplomatic role. The armor also indicates a lot in regards to the Sangheili reclaiming their culture (again, the Arbiter design ties in). In Glasslands, Raia notes that the Sangheili have to relearn a lot of the things that they had unlearned in the Covenant, including engineering. And here we have a Sangheili prodigy creating armor that was prototyped by Dr. Halsey herself.

CIA391: I really liked the Deadeye Helmet design from Halo 4. I always loved how it looked so slick with a target like visor with rings that look like they are pulsing off it. Really suits the lore description of it being used for "long-range target purging" (if you don’t mind me quoting the Halo 4 Essential Visual Guide). I always imagined this helmet being used in co-operation with robotic-drones. Due to how the limited view the visor has reminds me of them also.

PA1N7 1T BLACK: I fell in love with the LOCUS helmet in Halo 4 the second I saw it. It menacing, lethal, and sleek. The idea of no visor (or I would assume a camera type internal HUD) was always intriguing, less weak points and what not. [this person has fabulous opinions! – Grim]

erickyboo: I really like the PREFECT armour mostly due to the story reasons behind it. It's not a bad looking armour either and that "eye" is pretty cool looking. What makes it my favourite, I think, is that I really like forerunner armour and weaponry in general, which went well with my LightRifle, Boltshot, Autosentry and Pulse grenade loadout. This armour is forerunner in origin. It was reversed engineered by the Watershed Division, makers of interesting armour seen in halo 5, from a forerunner armour thanks to the Trevelyan Huragok; it should be noted I like those floating geniuses. I am really into the hybridization of forerunner and contemporary human technology so this armour really encapsulates what I like, forerunner tech, hybridization and huragoks. It makes me wonder of the possibilities of hybridizing forerunner technology and when it is applied to gear soldiers use. It also really makes me wonder what kind of advantages and features this suit of armour offers since it uses forerunner technology.

Tetrahedrite: GUNGNIR from Halo: Reach and Halo 4. For me, it gives a menacing and gargantuan presence. The lore and canon behind it is interesting too as it is considered to be a highly accurate MJOLNIR variant similar to Linda's ARGUS. I like to think there is so much tech in that helmet to achieve this accuracy, which is why it has a bulky design. It is also paired with the giant Spartan Laser, due to that weapon's accuracy as well. Plus it's just cool looking.

dajhier1: My favorite armor set is actually Infiltrator specifically the halo 4 variant. It has nothing to do with Spartan Naiya Ray I swear ;] I love stealth armor I like to think if I were a Spartan and had the choice to pick any variant of Mjolnir this is what I would go with a armor that helps me get in quietly crunch skulls and sneak out the back window before anyone is even aware I was there.

ComicBeast1212: Probably the Enforcer Set from Halo 4. So, why? The helmet design is close to Mark VI without being Mark VI. You get a lot of Chief clones running about, and while it is a cool set, I still liked to be original. Also, the little camera thing on the helm just looks cool to me. Other than that, it's always held a special place in my heart, being the armor set I've played most in. Whenever I see that set, I immediately think 'my Spartan'.

Starwarrior99: I think the new Hermes and Copperhead armors are going to grow to be favorites of mine. I really like the sleek lines and twist on EVA that Hermes has, and the angular visor and curved armor on Copperhead look really menacing. I can't wait to get these sets once Guardians comes out!

OompaMyLoompaa: I may be a bit biased because I am studying aviation, but I always thought that Aviator was one of the most aesthetically pleasing designs out of the MJOLNIR GEN2 variants. It's such a unique design and it stands out from the rest. There is a little bit of a daredevil vibe that is projected from the armor; the helmet is reminiscent of a motorcross helmet while also reminding you that this can be worn by pilots. Especially Spartans in an F-41 Broadsword. In short, it looks both functional and fashionable.

Sorikai33: I think Reach had a lot of interesting armor designs and the grenadier is definitely a favorite of mine. The heavy plated chest piece with the cylindrical drum clamped on is a very unique look, even more so when you add in that thick collar piece. The helmet also looks nice. It feels, just as its Reach description says, like an up-armored version of the standard Mark IV helmet. The design of the areas above and below the visor really give off the impression of a solid, protective helmet. Also, I find that the shape of the brim works very well with the interestingly shaped up-armor attachment the helmet can have, whereas I don't think that attachment looks as good on the other helmets that can have it. All in all, a very unique and cool set of armor.

While we’re on the subject of armor, thought we might as well drop a couple of sneak hints about some GEN2 Mjolnir sets you’ve yet to lay eyes on – and won’t for a while still. Still, couldn’t hurt to just take a little peek at some of the lore behind them, right?

Rarely seen outside of ONI, ARGONAUT users must undergo an extensive synchronization process to "train" the suit's move-by-wire reflex enhancers.

If you are going to be at Sand Diego Comc Con next week, be sure to not miss our story-centric Halo panel! Focusing on the myriad of narrative threads that tie directly into the story of Halo 5: Guardians and beyond, it's something that fiction fans aren't going to want to miss.

Hunt the Truth: Following the Trail of the Halo 5: Guardians Story

Join 343 Industries and special guests as they examine the compelling and prolific storytelling in and around Halo 5: Guardians. The panel will bring new insight into the mysteries surrounding the Master Chief and build connections between the stories that have been told so far, and sneak peeks of the stories yet to be told in game and beyond. Q&A session following.

That about wraps it up for this week, thanks for joining us! Scattered about the next couple months, we’ll revisit Halo: Hunters in the Dark, as well as dive a bit deeper into the development of Halo: Hunt the Truth, among other tasty treats. We hope you’ll continue to join us!

Until next week… Live well, play Halo, and always give the rocket launcher to the Marine in the passenger seat.

The Scarab is a mobile platform originally designed for artifact excavation in challenging terrain, but later used in a combat role against human forces.

The Brute Prowler is a Jiralhanae-commanded infantry fighting vehicle that was deployed in the final months of the Covenant War.