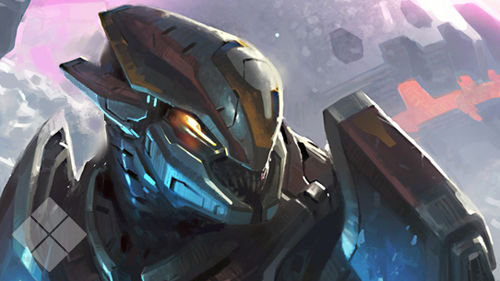 Welcome back loremongers. A few days ago, one of our community members, SaBx DARKHAVEN, started a topic in the Universe forum asking what the chances were that we’d see another book before the release of Halo 5: Guardians. After quelling the usual urge to post a popcorn-eating gif while reading through the discussion, I instead reached in my desk drawer and grabbed my trusty magic 8-ball to find an answer for the question at hand. The bad news? Ol’ Shaky spun up an initially depressing “outcome not likely.” The good news? That’s because you aren’t just getting one new book this year. You’re getting five. Before we get to a few delectable details, notice I said “this year” and not “before Halo 5: Guardians,” so don’t go telling Twitter that “Grim told us the release date.” Were it so easy… So with that out of the way, we’re proud to announce the Halo publishing lineup for 2015 from our friends and partners at Simon & Schuster! We’re pretty excited about it, and we hope you are too.

So SaBx DARKHAVEN, consider your question answered with an emphatic “pretty darn good.”

So with all the aforementioned awesome still fresh in our minds, I thought it might be fun to chat with one of the authors a little bit about what’s in store. Since Frank sits about 30 feet from me, I went for efficiency. Also, he knows the most. Let’s see what he had to say…

GRIMBROTHER ONE: Let’s start with a bit of a “State of the Union” with regards to Halo fiction overall. Where are we at right now?

FRANK O'CONNOR: We’re actually in a creatively challenging place, and I don’t mean that as a synonym for something negative. It’s literally challenging and we’re getting a lot out of that. We’ve set up a universe now that’s actually quite complex. We have gray areas where at the start of the Halo universe, everything was pretty black and white. We had a known bad guy that couldn’t be reasoned with. We had an opaque mystery in the Forerunners that couldn’t be penetrated. We had simple, almost binary motivations and everything was either good or evil. Now we have a galaxy in chaos and a lot of nuance in motivations and politics. We have Covenant with their own agenda, we have the beginning of an Elite civil war. We have a religion in tatters but perhaps in the beginning of a revival. We have Halsey whose past crimes have been exposed, but then so has the victory and good those crimes were in service of. And of course, we have the Master Chief dealing with the loss of a vital part of his own identity, and questioning his past. All of that stuff is feeding into the novels and comics and it’s all grist for the mill.

GRIM: The novels have been an incredibly important part of the Halo experience right from the beginning with Halo: The Fall of Reach. How has their role evolved in helping tell Halo’s broader story?

FRANK: We’re always careful to make sure the novels support and enrich the game, but to ensure they work as standalone pieces. Folks reading this are super familiar with our canon, and when they think of the Chief, they think of his origin story, the hardships he and the Spartans went through, the Insurrection, first contact – all of that – but remember, most players simply don’t have that background, so we want those guys to be enriched and delighted when they do start reading the novels. But we also want them to enjoy the literature, which in itself spans more than one style – from the action and tactics focused Fall of Reach, to the esoteric, very alien atmosphere of the Greg Bear novels.

GRIM: Fans have noticed some new approaches to releasing print-style media, specifically with the addition of shorter-form fiction such as the recently-released Halo: New Blood by Matt Forbeck. Can you talk a bit more about how these new formats can add to the Halo experience?

FRANK: We have more of these shorter, digestible pieces in the works. I’m finishing one right now that explores the nature of AI through the eyes and travails of a less-exposed Smart AI character, but someone you guys will be familiar with. This lets us do a couple of things – it lets us create fiction for people with shorter attention spans, or you know, busy lives, but also lets us pivot quickly on ideas and opportunities, and flesh out things we can’t easily explore in an explosion-filled game.

GRIM: What can you tell us about your own new addition to the fiction, Halo: Saint’s Testimony?

FRANK: I’m writing in a subject that has always fascinated me, beginning with Halo from 2001 – the nature of AI and the nature of life itself – or rather consciousness. There’s a lot of philosophy and physics pointing to consciousness being an aspect of existence itself – the universe itself evolving thought with life as a node of that evolution. And there is more than one way to skin that cat. This won’t be an action epic, but it will be mercifully short.

GRIM: This isn’t your first foray into writing Halo fiction, either; many fans are quite familiar with your previous work, Halo: Midnight in the Heart of Midlothian. How is it different for you personally when approaching a single story versus helping guide the overall direction of the narrative from a franchise perspective?

FRANK: I think of myself as a typist rather than a writer. And I suffer idea block all the time. If I have an idea, I can hammer out a few thousand words in a couple of hours, but getting the idea just right, and then forming what’s often a partially baked notion into a narrative flow, that’s hard. I know a lot of writers and they’re all much more disciplined and better organized than I am. And that’s not false humility at all – it’s a confession of disorganization and fuzzy thinking. Thankfully I have amazing colleagues and editors to form my rubbish into something that’s at least comprehensible. But I look at folks like Greg Bear, Eric Nylund and Joseph Staten enviously. I wish I had half the talent or focus those guys do.

GRIM: I suppose we should probably talk about Mister Chief’s development in a different interview…

FRANK: Mister Chief is the absolute zenith of human endeavor and a perfect encapsulation of human talent. So I don’t think there’s really much more to discuss.

GRIM: How do you see the way fans experience and consume Halo fiction evolving in the future?

FRANK: As you mentioned before, we now have the ability to create short form fiction and distribute it effectively instantly as eBooks. But I love paper too, so I think you’ll see evolution in the form and function of the content, but the spirit of a book, in a period where we’ve lost giants like Ian Banks and Terry Pratchett, will continue to evoke the smell of newsprint and the sensation of pages turning, regardless of delivery method.

GRIM: Any cryptic final words for the fans?

FRANK: Everything you read this year is soil from which surprises will spring, many of them in Halo 5. I just watched a cinematic that made me tear up a little. But also made me proud of the scope of the worlds our writers and authors have helped build. And there’s lots more to come. 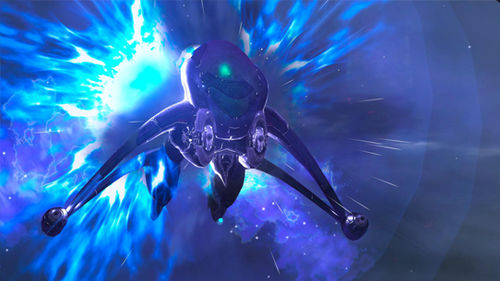 If you’ll notice, one of our new entries this week is the Banshee. As it’s my personal favorite vehicle in the Halo fiction, I thought I’d grant it the honor of helping us introduce a cool new feature we are beginning to add in to various entries in the Universe section. When you check out the Banshee entry, you’ll notice a new media gallery. The Banshee is one of the best examples of visual variation in the Halo universe, though it’s certainly not the only case. You wouldn’t say “fighter jet” or “tank” and expect to have just one single visual aesthetic; there are different models of each built for different preferences and purposes. The same goes for many of the vehicles, weapons, armor, etc. in the Halo universe. While the UNSC’s approach to design has a much more serial production-based foundation, the Covenant employed a much more coach-built philosophy to amassing its imposing armada. The media gallery in the Banshee entry shows off some of the individual variants in the Banshee family, and we plan on adding more of these galleries to several of the entries in the Universe section where it makes sense to display more distinct variants, both functional and visual.

Speaking of the new media galleries, we thought it might be cool to give fans a chance to be part of the action, and thanks to the Xbox One’s new ability to capture and share screenshots directly from gameplay, it’s easier than ever. We’ll be giving more details soon about different themes we’ll be looking for. Maybe one week it will be Warthog variants, maybe another it will be different types of Unggoy. No matter what it is, we’ll be collecting and picking out some of our favorites to be included in their respective Universe entries, and members whose images are used will be credited for all the community to see. Here’s a couple of tips before you get snap-happy.

-We’ll be looking for shots with no UI elements, so the Blind Skull might suddenly come in much handier than normal.

-Bring a buddy! Co-op play can be a big help when trying to get that perfect action shot.

-Think about what aspects about a particular subject make it truly unique, and try to show off its best angles and attributes.

So stay tuned for more info on how to submit and tag your screenshots, and maybe start practicing in Halo: The Master Chief Collection this week in preparation for your first assignment coming soon…

Well folks, that’s it for now. We hope you enjoyed your stay. Oh, and one more thing, in case you were wondering where this week’s header image comes from, it’s from the cover of one of the books we just announced. If you think you like it now, wait until you start to see the bigger picture.

Until next week… Live well, play Halo, and remember that the pen is mightier than the sword... if the sword is very short, and the pen is very sharp.

The Banshee is easily the Covenant’s most common support aircraft, offering extremely high maneuverability alongside an impressive armament.

The outer colony of Aleria is the second planet in the Elduros system. The majority of the population lives in extreme poverty due to a century-long drought.

One of the most powerful Forerunner AI ever made, Mendicant Bias was turned against his creators by Gravemind.