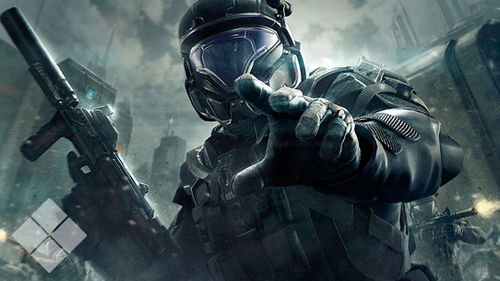 Welcome back as always, folks! This week has been a pretty busy one at the studio, both with elements we’ve recently revealed as well as secrets yet to come. This week I sat down with 343 Industries’ Franchise Development Director Frank O’Connor to talk about a couple of very specific topics that he’s pretty passionate about: his recently-released digital short, Halo: Saint’s Testimony and Hunt the Truth Season 2, which debuted this week into the eager ears of fans all over the world. Without further ado, let’s hear what he thinks about all the recent goings-on…

GrimBrother One: Let’s start out with your own most recent addition to the Halo lore, Halo: Saint’s Testimony. Its unique perspective and subject matter was a pleasant surprise to many fans that devoured the tale as soon as they could. Were you happy with how the story turned out when all was said and done?

Frank O’Connor: I was happy-ish. I am never 100% happy though and honestly, nothing makes me cringe harder than reading my own stuff, or watching myself on TV, or hearing my voice on tape. I just don’t have tolerance for my own self. What I did enjoy though, was seeing my work tightened and honed by the editors here at 343, and of course the bulk of that work was done by our partners at Simon and Schuster.

GRIM: Now Halo: Saint’s Testimony deals with a subject – the nature of AI and the nature of life itself – that, in your own words, has fascinated you for some time now. Can you speak a little more to that curiosity and how it served as the inspiration for this particular story?

FRANK: You know, we’re literally just decades away from a technological singularity. Folks will read this and scoff, but it’s not like Faster Than Light travel – it’s an inevitability. Eventually, we will end up with a machine intelligence faster and cleverer than us, and what happens then? It’s not Skynet – I’m an optimist, and I think we end up in more of Iain M. Banks Culture than in some dystopian Matrix version of the future. AI will work together to make logical, politics-free decisions about the economy, environment, basically anything you can think of. Having an objective outsider perspective can really help us get over the subjective, anthropomorphic problems we have with our own thinking processes. An AI could ape the way a person thinks, but there’s also value I think, to a rational mind looking at the data and the issues and suggesting solutions.

We’re so short term in the way we deal with everything from the economy to the Space Shuttle. We tend to think in artificial “clumps” of time – four year terms for a president, for example, that stymie our ability to think in the truly long-term. So an “eternal” machine could help us vault that hurdle to our thinking. It doesn’t have to be a “master” over us, it could simply be a consultant.

And Iona is an emotional being, which is fascinating in itself, but she doesn’t need to be. Even BB cares more than he lets on. Having AI be relatable is vital to our fictional story, but it’s also useful in real-world interactions – and even our prototypical Cortana on Windows devices, reflects that anthropomorphic bent. She’s easier to relate to conversationally as a result. Hell, sometimes I tell Siri or Cortana “thank you” when they give me directions or information.

GRIM: I mean, I think it’s safe to say we’ve all had a few… unconventional exchanges with those aforementioned entities. So, while artificial intelligences have found a home in many different science fiction universes over the years, they actually occupy a particularly significant role in the Halo narrative specifically. What are your thoughts on the importance they have played over the years?

FRANK: To date, our AIs have served as expositors and guides – and we see that pattern in real life too. Ultimately it’s a persona attached to near-infinite information. So in a video game where exploration and information are paramount, an AI makes a lot of sense. Halo 5 will be the first entry in the Master Chief’s mainline story where he has to survive without that AI companion, and reflect upon what he lost when Cortana sacrificed herself.

GRIM: Regarding the story’s format in general, many fans seem to really be enjoying the ability to experience these bite-sized stories that have been published this year, with new digital shorts providing shorter – but perhaps more plentiful – peeks into different stories around the Halo universe. Do you think it’s something that fans can expect to see more of as we move into 2016 and beyond?

FRANK: Absolutely. These are fun ways to explore dark corners of the universe, and ironically help ourselves understand better, the stories we’re trying to tell.

GRIM: Speaking of alternative storytelling methods, perhaps one of the biggest surprises this year for fans was the unexpected impact of the Hunt the Truth series, which followed 26th century war journalist Benjamin Giraud and his quest to uncover the story behind the Master Chief. Looking back on the first batch of episodes that came out leading up to E3 2015, what are your thoughts on its development and reception?

FRANK: I loved the process, from inception to broadcast. We had a great relationship with Noah and the guys at Ayzenberg who helped us build it. They really “got” the universe and we were able to collaborate in a seamless and fluid way. And now that we’re beginning season two, that process is smoother still – and so the emergent opportunities that come from trust will make this even better than season one.

GRIM: I remember listening intently myself every week, the delivery on the performances were just so compelling and immersive, it’s was nearly impossible to not be emotionally impacted by Ben’s journey. Did you have any particular personal favorite moments from last season?

FRANK: I think Ben’s sense of betrayal, not just at the veracity of events, but at putting his trust in people he truly believed in, only to have that trust crushed underfoot, is moving. And I don’t want to say too much about season two, but there will be moments that compound that sense of betrayal, but also perspectives that might convince a listener of the other side of the argument.

GRIM: Going even further, a lot of community members expressed their excitement over particular story threads in Hunt the Truth that connected back to the deeper lore, from Ellie Bloom (from the “Starry Night” trailer) to Michael Sullivan (from Halo 4: Forward Unto Dawn). Can you talk about the balance of how to best connect those threads in ways that new fans will find enjoyable, but old fans will take some extra special pride in recognizing?

FRANK: Mostly these things have to exist in a vacuum – you don’t need to know Sully was from Forward Unto Dawn to enjoy the podcast, but hopefully if you do know that and you are paying attention, this will feel more fleshed out and rewarding as a result.

GRIM: So, the 800lb gúta in the room… Hunt the Truth Season 2. Now that fans have gotten their first sufficient taste, what can fans expect as the season continues? Anything particularly different about the way the story is told this time around?

FRANK: The story will be much more direct. Some of the curtain has already been lifted on ONI’s machinations, for example, but there will also be surprises, starting even before the “real” first episode.

GRIM: If you could give one infuriatingly tantalizing tease to whet the fans’ appetite for what’s still to come in Season 2, what would it be?

GRIM: Yup, that should do it. Thanks as always, Frank.

Speaking of Season 2, just in case you haven’t had a chance to partake in the freshly brewed mystery that recently hit the airwaves, make sure you are keeping a close eye on the Hunt the Truth tumblr page for all the latest developments. Already fans have been picking jaws up off the floor and tossing about wild and excitement-laden theories back and forth to each other on our forums, as revelations about FERO, Ben, Petra, and many others, are incredibly hot topics right now. And if you’ve got some crazy theories of your own just begging to be let loose, don’t hesitate to share your thoughts as well! We’ll be having more to talk about in the coming weeks as the story progresses, and the intrigue increases. In fact, I’m not even so sure that we’re entirely done with the first week of surprises. But who knows? Either way, I’m sure you’ll all have a ball trying to figure it all out. 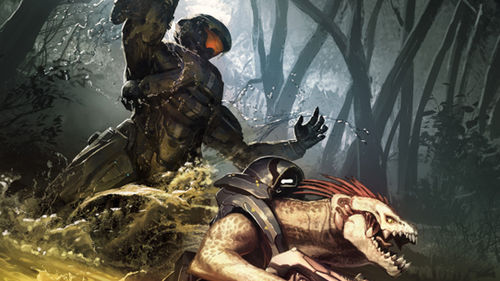 In case you missed it, Halo: Escalation #22 just came out this week, and the action at the Absolute Record is heating up to say the least! As our friends at Dark Horse Comics puts it…

“The Absolute Record” Part 4—On a hidden world, Spartan Commander Palmer and the fugitive Dr. Catherine Halsey go head to head for control over the ultimate trove of Forerunner secrets. The six-part sequel to Halo 4: Spartan Ops ratchets up to its explosive conclusion in this thrilling issue by Duffy Boudreau and Douglas Franchin.

If you’ve been following the exploits of Palmer, Thorne, Halsey, Glassman, ‘Mdama, ‘Sevi, and the rest of the gang, you are definitely going to want to pic this one up. The end is nigh, and the stakes are high. Go check it out! 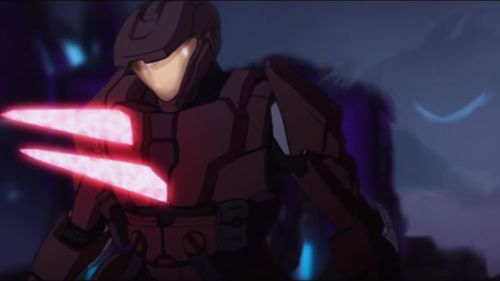 Legobrick1000: In Halo 2: Anniversary’s multiplayer, a red Type-1 Energy Sword is presented. Is it canon? Can the sword's color be altered by the owner or manufacturer?

A: The red-colored energy sword is not only canon, but has been visualized long before Halo 2: Anniversary’s multiplayer and Forge modes. In Jon Goff’s Halo: Evolutions story, “Headhunters,” a special breed of Sangheili commandos utilized blood-red tinted energy swords. Fans got their first visual glimpse of these in the motion comic adaptation of the same story. While much less frequent, there have been (and continue to be) instances of particular Sangheili groups or individuals wielding specially-crafted blades of varying colors, the Prophets' Bane being another such example.

And with that, we’ll successfully sign off for another spell. Keep your eyes and ears peeled for more truth to hunt, and if you need some additional Halo story goodness to pass your time, check out our breakdown of this week’s big media drop on what to expect from Halo 5: Guardians’ upcoming campaign!

Until next week… Live well, play Halo, and Shine Bright.

Benjamin Giraud is a reporter and civilian contractor for ONI. In 2558, Giraud was asked to conduct a series interviews for a PR campaign about the Master Chief.

Petra Janecek is a civilian war journalist and investigative reporter who has dedicated her life to documenting events and people that some would like to remain secret.

Holly Tanaka serves as the engineering and electronics expert of Fireteam Osiris.