Howdy, Halo lovers. Thanks for joining us for another week of your favorite service for story-centric snippets. Last issue was a lovely load of lore lovin’, continuing the Firefight-focused fiction feast. If you haven’t gotten a chance to read up on it yet, definitely do so here. This time around we’re playing a bit of catch-up after an incredibly busy few weeks, but we’ve still got some pretty cool things to talk about that we think you’ll enjoy. Also, props to Halo Waypoint community member Nihilus Shadow for the epic highlight shot of the Didact’s Hand (though maybe not quite as good as this one) used as this week’s feature image. And with that, let’s dive in! 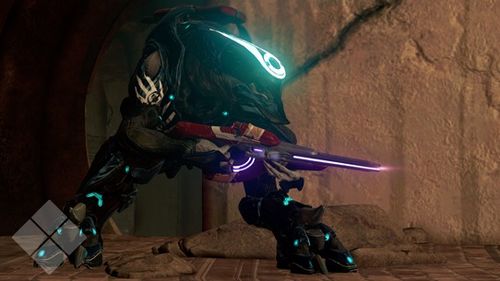 One of the sweet little surprises that awaited players diving into Halo 5: Guardians for the most recent release was the (re)appearance of a well-known Sangheili warlord. There were no doubt plenty of surprised lore aficionados when Jul ‘Mdama’s name was called out for the first time in Warzone within the Attack on Sanctum scenario, as the challenging Boss he is. While this is the first time players have had the opportunity to tackle the resurgent Covenant leader in-game, it’s certainly not the first time he’s left his mark on Halo hearts. Jul first appeared in Karen Traviss’ Halo: Glasslands and would go on to feature prominently in her Kilo-5 trilogy, revealing the ugly underbelly of interspecies post-war politics.

Perhaps the most well-known encounter Halo fans have had with ‘Mdama’s menacing mandibles was through the Halo 4: Spartan Ops campaign, which saw Jul take on the role as the prime antagonist whose forces players would fight across the interior surface of Requiem. While Jul met an… unceremonious and swift end in the opening moments of the Halo 5: Guardians campaign, players now have the opportunity to land the killing blow themselves on the Sangheili in Warzone. In-fiction, the opportunity to take said kill-shot is highly sought after by every S-IV in Spartan Branch – particularly by those who took part in the Requiem campaign. Will you be one of them? 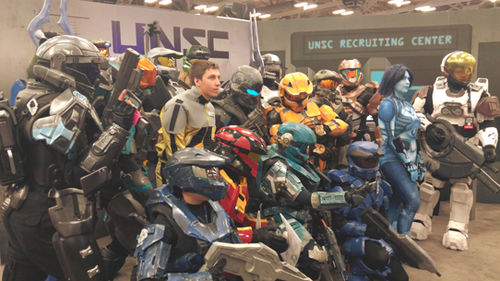 Canon Fodder took a week off last week to attend RTX – the annual Roosterteeth Expo. The Austin, Texas show played host to a whole lotta Halo, and our show floor offerings contained several details that regular readers here would no doubt enjoy – including a new playable Halo Wars 2 game mode (that wasn’t included in the beta), and a panel that showcased some delectable goodies from a range of Halo hawtness, which you can check out on-demand right here.

However, even with all of that, there’s no doubting what the best part of RTX was: meeting you. It was an incredible honor and pleasure to get a chance to hang out alongside passionate Halo fans – and even chat lore with some of the canon community on the show floor. To each and every one of you who joined in the festivities last weekend – whether in person at the show or online during streams, thank you. Can’t wait to see you all at the next event!

One of the highlights of the aforementioned event was the first public showing of our upcoming Halo Legendary Crate, in partnership with our friends at Loot Crate. This showcase included the unveiling of the first entry into the brand new HALO ICONS figure line – a series completely exclusive to the Halo Legendary Crate. If you are a Halo fan or collector, trust me… you are going to want to get these.

Each new crate will include a new Halo Icon figure, celebrating a variety of themes. Our founders’ crate for example, features a classic red and blue Spartan facing off, celebrating both the Spartan initiation theme as well as the legendary multiplayer legacy of Halo. Additionally, this all-new style of Halo figure will allow you to connect the bases of each set to build scenes as you receive new crates. Not only that, but the characters themselves are removable from the base to let fans mix and match to create all sorts of different possible arrangements.

For this particular crowd, you might be pleased to know that we may or may not have carefully crafted fiction elements seeded within each crate. And by "may or may not," I mean we do. Sometimes it might be similar to what you might find in a collector’s edition game package, other times it might be a bit… more. In fact, if you lean in nice and close to your screen, I’ll let you in on the fact that the first Halo Legendary Crate will also feature a preview for one of the stories in the upcoming Halo: Fractures anthology. Just saying. But let’s keep that between us, shall we? 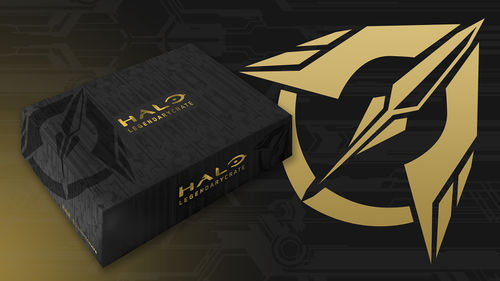 Another element of the Halo Legendary Crate has potentially even more impact on the Halo universe outside of the box itself. You’ve likely heard by now that signing up for the Halo Legendary Crate also initiates you into Fireteam Apollo, a canonical Spartan-IV fireteam that you’ll begin to learn more about as their story unfolds over the life of the Crate and perhaps beyond. We’ve seen a number of fans already speculating on the specific nature of Fireteam Apollo, so now’s as good a time as any to set the stage.

Early on, fans will receive mission briefs and in-fiction dossiers to educate themselves on the state of the universe and learn about legendary missions of the past. Players initiated into Fireteam Apollo will also get a special emblem to use in-game in Halo 5: Guardians, as well as special designation within the Halo Waypoint forums. We’re excited about the possibilities that Fireteam Apollo opens for fans to take part in the ever expanding Halo universe and fiction, and the more you become involved, the more we’ll be able to do with the program in the future. See you in the barracks, Spartan.

The latest Halo Heroes animated adventure from our friends at Mega Bloks dropped today, and showcases Spartan Olympia Vale taking matters into her own hands in a lone wolf operation to stop an enemy dropship. These fun,action-packed vignettes are a blast to help create, and showcase some of the “canon gone crazy” (I’m looking at you Toa Freak) that collectors and fans can create on their own by amassing their own Mega Bloks forces.

Check out the fresh new flick right here, and if you missed our previous adventure, don’t let the Buck stop here. Vale’s adventure won’t be our last… be sure and keep a look out for another new chapter featuring a fan-favorite hero coming soon.

Q: Isn’t Blamite mined from the Sangheili moon of Suban? If so, how are the Unggoy getting hold of it?

A: Suban is indeed the only known source of the beautiful - but deadly - crystalline material used for Needle ammunition. However, due to the vast and expansive breadth of the former Covenant empire, hundreds of carefully curated storage facilities were employed across dozens of systems to serve as local waystations for Covenant fleets to restock their stores. Following the collapse of that empire, these stores have become ripe for the picking by any number of interested and opportunistic parties. Additionally, not all factions with active mining operations on Suban are loyal to the Swords of Sanghelios, or even the Sangheili specifically – in an ever-volatile galactic landscape, many manufacturers are content to supply raw materials to whoever has the gekz, regardless of affiliation.

That will go ahead and do it for us today, but we’ll be back next week with more lore chat. See you then!

Jul ‘Mdama’s malcontent with the Arbiter led him to rebuild the Covenant and seek out the ancient Forerunner known as the Didact in an attempt to crush humanity.