In the absence of an Obi Wan “Hello There” gif, I’d simply like to say “welcome back.” Although, given the circumstances of an entirely new Halo adventure waiting in the wings, it’s entirely possible that we might also have a fair number of newcomers to these parts. If you’re someone that’s jumping on the Halo train and eager to learn more about the deeper lore and underlying stories in our universe, then Canon Fodder just might be the place for you. If you’re looking to pass a little time before saddling up with the Chief on his next adventure, we’ve got over a hundred issues worth of lore-loving universe exploration for you to peruse and enjoy.

When publishing our latest installment back in March, I had no idea it would be our last week actually inside our studio for the foreseeable future. Since then, myriad challenges have risen and been met head on, and despite our physical distances, I couldn’t be prouder to work with such an amazing group of folks all striving hard to carve out the next exciting and memorable chapter in Halo’s legacy—and we can’t thank all of you enough for being right there with us each step of the way. Besides, Halo’s been pioneering fun ways to bring people together online since at least 2004, right?

But speaking of exciting new chapters, in today’s edition, we’re very excited to talk a little bit more about a few elements I’m quite sure will have fiction fans incredibly enthused, starting with the reveal of a brand-new character you might find lurking silently in the shadows at some point in the Halo Infinite campaign.

In hushed whispers throughout the ranks of the Banished, Jega ‘Rdomnai’s name is spoken of with care. The blademaster’s history is shrouded in rumor and half-truths. Some say he was an experiment, an affront to his own kind. Others make mention of a clandestine ambush gone wrong. Very few know the truth, fewer still speak of it. One thing is certain: he has hunted demons before, and as the first recruit welcomed into the Hand of Atriox, he will do so again. 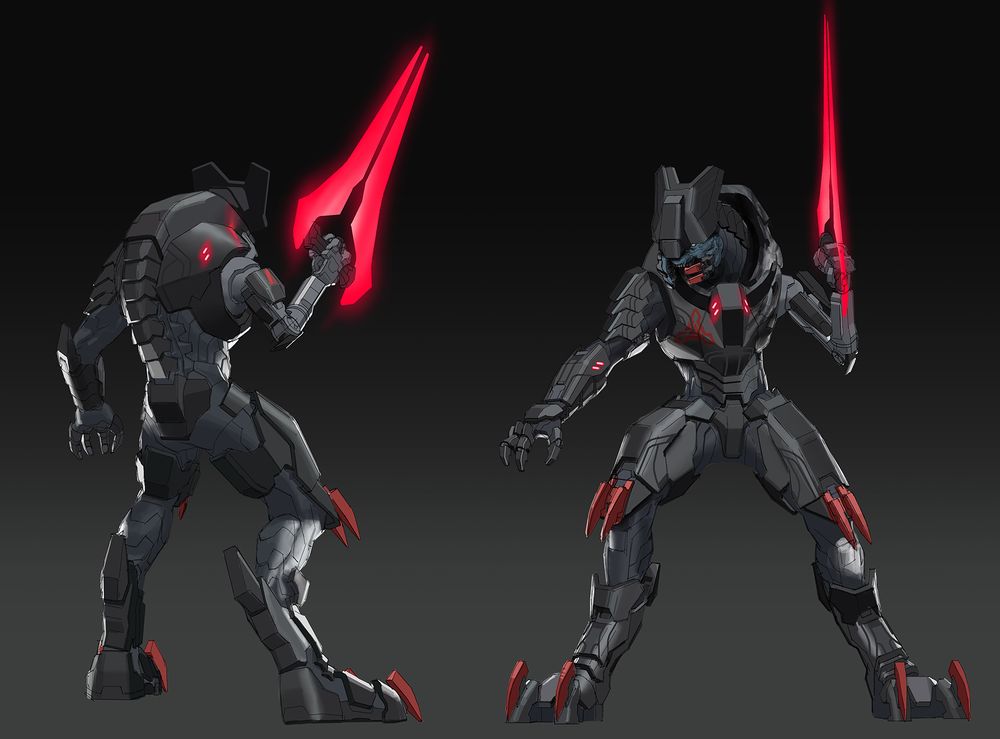 A mysterious and battle-ravaged Sangheili warrior, Jega represents one of several new characters that you will encounter along your way through the Halo Infinite campaign, with each confrontation playing its own part in Chief’s continuing journey.

While today’s introduction is just a quick glimpse, we hope it leaves you eager to learn more. Trust me, we can’t wait for you to have the opportunity to explore more for yourself.

But wait, there’s more! Over the years, the evolutionary pathway of Mjolnir armor evolutions has been about as easy to understand as theoretical physics, common-core math, and the McRib. We actually touched on some of Mjolnir’s spiral development history (which dates all the way back into the Mk.IV days, for those who might be mistaken in thinking it was “so much simpler” then) back in Issue 101.

That being said, with a new art direction in Halo Infinite that draws on elements both classic and modern, it gave us an opportunity to move the Mjolnir platform ahead once more, ushering in the GEN3 era of powered assault armor, something first hinted at back in the Official Spartan Field Manual. Leading the way for this new generation is the Mark VII, the result of years of covert component testing and parallel systems development.

Originally field tested primarily by Spartan Naomi-010, the GEN1 Mark VII suite of components would be refined time and time again, with further elements tested onboard the GEN2 DECIMATOR-class Mjolnir variant. Eventually, these efforts would dovetail with parallel projects within Materials Group, culminating in the GEN3 Mark VII, designed to outfit the latest Spartan contingents with the very best in cutting-edge warfighting technology.

Though it does represent a generational leap for the Mjolnir platform for actively deployed Spartans, some elements tested with the GEN1 and GEN2 Mark VII remain in the prototype stage due to unreliability or cost factors, such as integration of Forerunner-derived nanomachine elements and full shield-shaping. 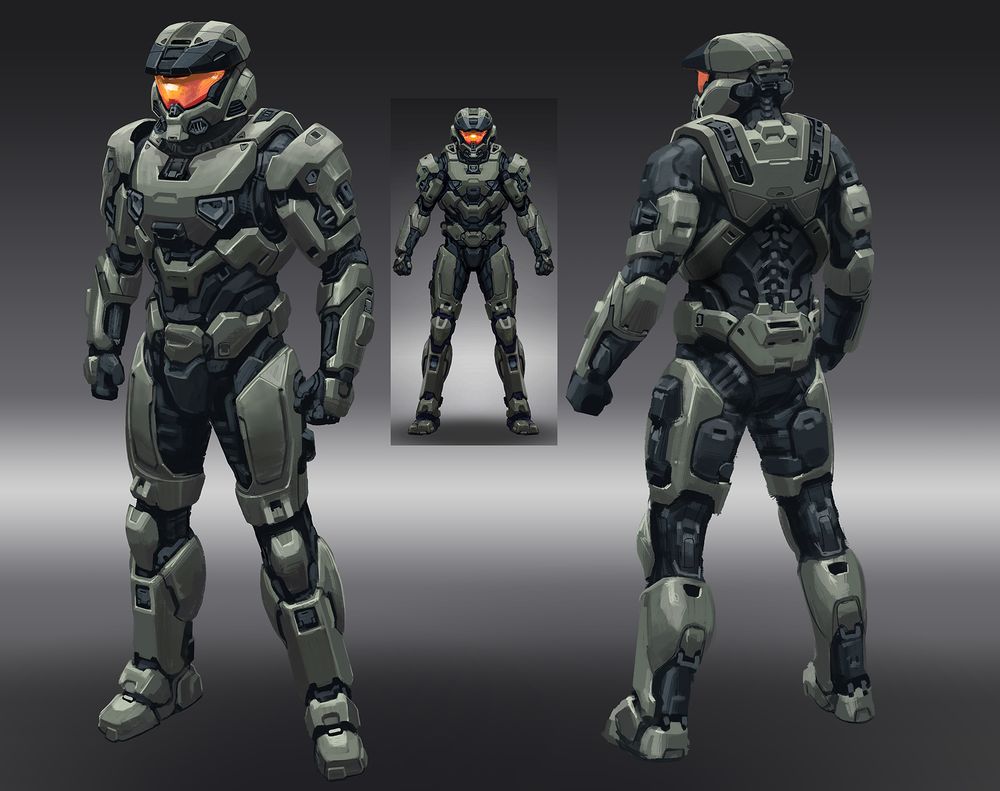 And for an additional sneak peek at some of the in-game lore behind this latest set of Spartan armor:

The Mark VII designation refers to a number of prototype platforms that test the ever-evolving Mjolnir Generation 3 standard. The most recent design to bear the name was selected by Dr. Halsey from Materials Group's KEYSTONE development program.

One thing we thought might be helpful today is to also gather up what we do already know about the story for Halo Infinite, just in case you had missed a particular detail.

We’re excited about a story that helps put players of all experiences on a similar playing field. You are stepping into the Mk.VI [GEN3] Mjolnir of the Master Chief nearly six months after the UNSC met defeat at Zeta Halo. It’s up to you to discover what’s taken place in the past, and what it might mean for our future.

Since we last met, two more episodes in our ONI Archives series released alongside their relevant game counterparts on PC as part of the Master Chief Collection. Like the first two episodes, each one contains an overview of events that help set up its associated game’s story, but also includes an in-universe audio drama that gives an intriguing glimpse into a particular corner of the canon.

In case you missed them, here’s another chance to check them out: 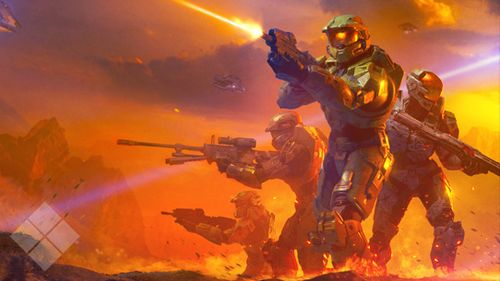 You may remember that in our last issue, we showed off the gorgeous cover art and back-of-book description for the upcoming novel Halo: Shadows of Reach. The new Troy Denning-penned adventure officially drops on October 20, and for fans looking to squeeze a bit more lore out of their purchase, Wal-Mart outlets (online and in-store) will be stocking a limited edition version that include an additional short story entitled Sacrifice.

I would tell you more, but you know, spoilers…

And with that, we move on for now. However, I just might kinda maybe have a draft for Issue 109 already in progress. There just so happens to be a new book coming out fairly soon, after all…

Until next time… Live well, play Halo, and seriously, don’t try to make sense of the McRib. Just enjoy it.