Chronique:Canon Fodder - Into the Storm

On the fiction-focused front, we’re back at it with some awesome new narrative-natured news. Oh, and remember that upcoming Halo Legendary Crate we said you shouldn’t miss out on? Lore lovers in particular might want to make sure to get their hands on these each round. There may or may not be some carefully crafted canon warmly woven into each edition – stuff specifically aimed at the “detail-oriented.” Just saying. 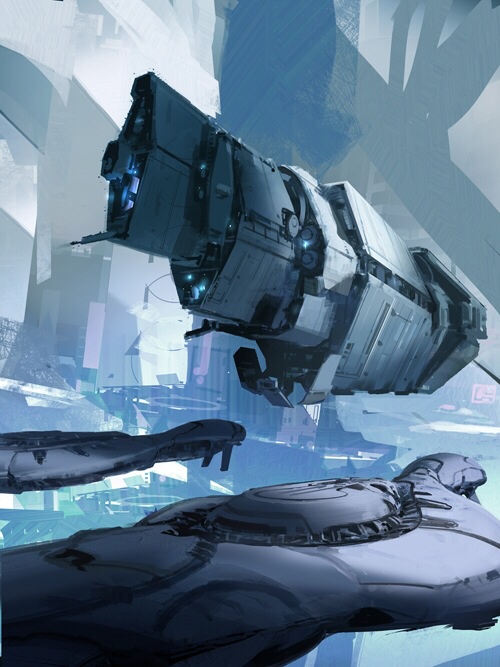 Throughout the myriad of Halo media released over the past nearly fifteen years, stories have been told in an impressively eclectic range of corners in the universe, ranging from intimate boots-on-the-ground stories of war, to ancient and far-flung alien legacies. One specific type of setting has had a knack for rustling the happypants of a certain flavor of fan – particularly those enthralled with the maritime minutia of the Halo universe (I’m looking at you Grizzlei, Unikraken, SOTP folks, etc). For Halo fans who daydream of everything from mind-bending physics of slipspace to the strategic intricacies of the Keyes Loop, we’ve got a new book for you – Halo: Warfleet – An Illustrated Guide to the Spacecraft of Halo. Ship hype, engage.

So, what is it exactly? Halo: Warfleet is our next book project with our friends and publishing partners at Egmont – think of it as a sort of “technical” companion to the recently released Halo Mythos. Created by 343 Industries, this new guide is first and foremost a cross-section reference book, with ten full-color ship cross-sections by Hans Jenssen (yes, that Hans Jenssen, of the Star Wars Incredible Cross-Sections fame) and John Mullaney (the artistic brilliance behind Firefly Serenity cross-sections). In addition, amazing brand-new secondary art pieces are being crafted by epic art folk such as Sparth, Darren Bacon, Glenn Israel, Isaac Hannaford, Tyler Jeffers, and Carlos Naranjo. The image you see here is the cover art, currently under construction in Sparth’s artistic shipyards!

Halo: Warfleet is a resource book that taps into the technology, scale, design, construction, and variety of ships, space stations, and colony worlds in the Halo Universe. The book is divided into five sections: Introduction/Technical Architecture, Human Ships, Covenant Ships, Forerunner Ships, and an expansive Glossary. The text itself is crafted by the internal team here at 343, with Franchise Writer and ship-savant Kenneth Peters leading the charge. If you enjoyed Halo Mythos, you’ll love Halo: Warfleet.

Designed not just for core Halo fans, Halo: Warfleet will be an awesome title to be devoured by folks interested in the sci-fi and military genres, as well as anyone who loves highly detailed technical illustrations in general. That being said, deep-lore lovin’ Halo fans will have a lot to dig into, including specific technical details and terminology once locked away in the Halo Story Bible vaults!

The format is oversized to allow for larger illustrations and detail, with each spread being filled with annotations explaining the function of specific parts of a ship’s anatomy, accompanied by some history of the vehicle and statistics. Halo: Warfleet is slated for a late-2017 release, and we’ll be talking about it more – perhaps even showing off some sneak peeks at the beautiful artwork inside – as we get closer to release, so stay tuned!

Putting the ground in Ground Command[modifier]

We’ve spoken at length about some of the awesome new additions to the Halo tabletop experience created alongside our friends at Spartan Games, but pretty much all of the focus has been on the battles instead of the actual battleground itself. Well, not this time! Recently, Spartan Games made some awesome new scenery pieces that community commanders can commandeer to turn their tabletop into a true Halo haven. And we figured, hey, why should stuff like vehicles, weapons, and characters get all the love? What about crates, barriers, and cargo containers?! THEY DESERVE LORE, TOO.

The JW cabinets are tough enough for field use and hold enough firepower to make life rough for any Covenant attacker. Each can be configured for multiple mission and deployment scenarios, and is easily secured to prevent unauthorized access. A cabinet can hold ammo boxes, spare parts, optics, and maintenance tools, in addition to multiple weapons.

The UNSC marches as much on batteries as it does beans and bullets. Air-transportable fusion power plants are widely used by UNSC Army and Air Force units to meet their mobile power requirements, particularly in austere tactical environments where facility-integrated solar panels and wind turbines are insufficient or inappropriate.

The M72 MB-L is a heavily armored mobile protection shield used in both terrestrial and shipboard security roles. Drop-down travel wheels and steering lever allow the shield to be moved by a single individual on flat terrain, or it can be towed by any utility vehicle.

Widely used by UEG and UNSC security forces, the M72 MB-S is a one-man bunker that marked the site of many last stands in the closing days of the Covenant War. As with the MB-L model, drop-down travel wheels allow the shield to be repositioned.

The 26th century iteration of the standardized military air transport pallet. Beloved and hated by logisticians sweating under a hundred distant suns.

Features wireless access to packing lists, GPS tracking, environmental sealing, and ballistic-rated materials. Still doesn’t explain why your unit got shipped a pallet of them filled with pens and ceremonial swords intended for a Marine unit in another Sector. 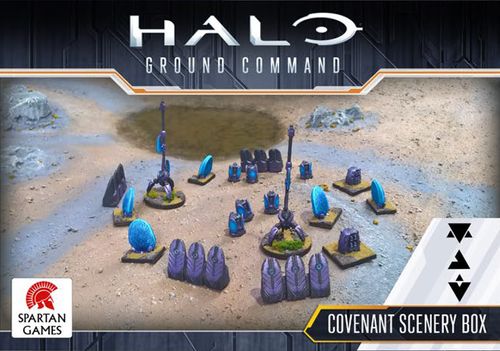 The first link in the Covenant’s command and control of their ground units begins with the placement of these Spikes in areas they intend to dominate. Each relay functions as a combination of proselytization network uplink, communication hub, and sensor relay node.

Nicknamed “space crates” by UNSC forces, the variety of forms and usages of Covenant cargo containers drove ONI analysts to distraction. Following the war, it was discovered that many Covenant warriors were just as confused as to the special functionality of some units, and never entirely sure of their contents.

The three armored panels of the Triptych are effective as a linear obstacle, vehicle blocker, and firing position at fortified Covenant landing zones, but they also contain systems which broadcast subsonic signals that deters local wildlife and has a soothing effect on nearby Yanme’e.

These volatile energy cells are vital for Covenant combat operations, and are used to power field equipment and recharge plasma-based small arms. Unfortunately, Unggoy in charge of their transport and maintenance rarely account for the devastating consequences of placing them in areas likely to come under enemy fire.

And that’ll do it for yours truly for now. Next up, our beloved Bravo!

Until next time… Live well, play Halo, and take heart, my brothers – only our enemies should fear this raging storm!