Chronique:Canon Fodder - Sending Out an SOS

Welcome back to Canon Fodder, folks. The hour draws ever near when fans all over the world will take their first steps into the next Halo adventure, and we couldn’t be more excited to share it with you. Last week, we took a look at some of the UNSC’s latest vehicle advancements available to players in Halo 5: Guardians. This week we wanted to help prepare you for the upcoming Halo 5: Guardians campaign as well as provide some additional Elite education to the Universe. As many of you have seen, the upcoming game has begun finding its way into the hands and hard drives of reviewers across the planet. No doubt many of you have watched a smattering of media outlets and community all-stars sharing the spoils with eager audiences via streams across the interwebs. Now with that being said, if you are hoping to enter into Halo 5: Guardians completely dark and devoid of presumptions, it might be best to try and avoid such online avenues for the next week or so. Stay vigilant, Spartans!

Now speaking of Halo 5: Guardians’ release, in case you missed it this week, we’ve got a pretty sweet launch lead-up in store for you the day before the hunt officially begins. On October 26th, from 3-9pm PDT, 343 Industries invites you to join us for Halo 5: Live, an unprecedented six-hour live broadcast that you won’t want to miss, airing exclusively on YouTube. Fans all over the world will want to tune in to experience an incredible celebration of Halo, one that will feature inside looks at the game, interviews with developers, live look-ins at launch events across the world, and some pretty awesome celebrity appearances – from actors that many are Buck-wild for and folks that are instrumental in bringing the game to life, to some incredibly fantastic community members who are always celebrities in our book. Halo 5: Live will feature a huge range of content that Halo fans of all walks will want to check out, especially fans who adore them some Halo lore-lovin’. We certainly hope you’ll be part of the party. 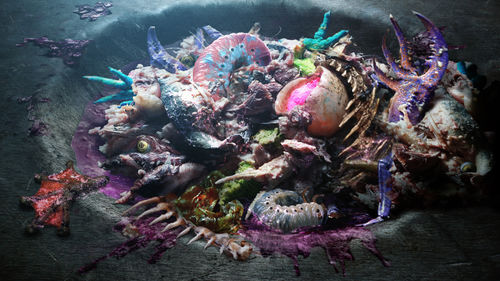 This week’s episode of Hunt the Truth not only added to the incredible tension surrounding FERO – I mean Maya’s – latest predicament, it also gave fiction fans their first real “glimpse” into the bowels (but for real though) of a Kig-Yar pirate ship. While as a long-time Buccaneers fan I personally would relish the idea of getting and inside look at such a vessel of plunder, this ship is entirely another story. The episode goes into great detail describing the sensory assault our protagonists must endure that is the shipmistress’ wounded warship. This episode also gives fans of ONI AI Black-Box even more reason to, well, be fans of Black Box. Seriously, he’s so great. Add in even more twists, turns, and lingering ties to Halo 5: Guardians, and you’ve got yourself an action-packed twenty minutes you don’t want to miss. I mean, who wouldn’t want to hear more about Jackal stew seasoned with eyeballs? Actually probably no one. Gross. 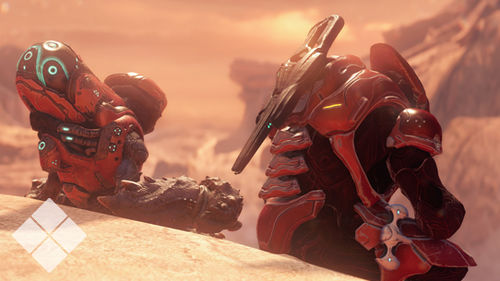 Don’t worry, we’re not talking about those red vs. blue campaigns. The Halo 5: Guardians campaign consists of 15 chapters that all help tell the unfolding and intertwining stories of Blue Team and Fireteam Osiris in their own particular fashions. From storming Covenant forces to battling back Promethean powerhouses, from vehicle-heavy assaults to wide open encounters, each chapter within the campaign will carry you through an ever-escalating adventure. That’s not to say there won’t be some quieter moments though. In fact, a few of the chapters will introduce something quite new when it comes to typical Halo campaigns in the form of non-combat exploration spaces. These particular chapters will give you a chance to catch a breath, but also to explore, to look, and to listen. More than perhaps any other campaign in Halo history, there is story to be found to those willing to look and listen – whether that be to your squadmates themselves, or perhaps to other characters that are scattered throughout the environment. These non-combat chapters give players the chance to advance the story while not necessarily needing to simultaneously advance on the enemy. Plus, one of them in particular introduces one of the most excellent Unggoy in Halo history. Trust me. 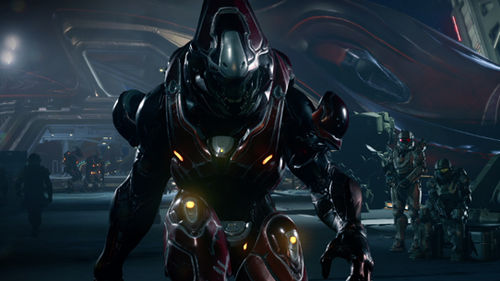 As you’ll notice below, this week’s Universe entries give players a pleasant peek into some of the deeper lore behind our multi-mandibled co-stars. Specifically, a few community members have asked about the presence of Storm-class Sangheili within the Arbiter’s Swords of Sanghelios. It’s important to remember that while the Storm-class soldiers have operated within the Covenant in various capacities for decades (think similar to Covenant Rangers), many of the Sangheili who served in that role chose to take up the Arbiter’s cause following the Great Schism and eventually joined the Swords of Sanghelios. While they will certainly make up the bulk of the style of Elite you will encounter fighting alongside the Arbiter, canonically he has many others serving in a wide range of roles, and utilizing a varying selection of armor, including for example, the combat harnesses seen in the Halo 2: Anniversary bookend cutscenes. Needless to say, fighting alongside the Arbiter (in his slick new armor) and loyal brethren are some of my absolute favorite moments in the campaign. We hope that you’ll enjoy it too!

Well folks, it’s almost time to close out another issue. In the next few weeks we’ll be diving even deeper into Halo 5: Guardians, checking it out from multiple angles, looking at updated weapons, new technologies, curious critters, and much more. Also, we’ll be updating the Universe encyclopedia with more and more articles looking at new information revealed in the game’s campaign. In fact, if you take the time to peruse through the Universe section now, you may notice that we’ve already begun updating some of the visuals to match right up along with what you’ll be experiencing very soon. And speaking of updated weapons, if you happen to have checked out Bravo’s recent deep dive into the Halo 5: Guardians multiplayer ranking system, you might have noticed that tucked within talks of Arena competition and merciless multikills was a sneaky new look at a brutally familial tool of destruction. But that’s a story for another time. And one last thing before we go, don’t forget to check out the just-dropped preview of Halo: Escalation #23, straight from our friends at Dark Horse Comics. And since you’re probably still here, you might as well rewatch the awesome official launch trailer again. I mean, why not?!

Until next week… Live well, play Halo, and have you ever stopped and wondered why the Covenant gave ships such complicated names?

Sanghelios is the cradle world of the Sangheili species, known to humans as ‘Elites,’ and currently the site of their largest population and governing control.

Resting high above the Csurdon Sea, the city of Sunaion was constructed to pay homage to the Guardian concealed in the deep below.

The Swords of Sanghelios is the modern incarnation of an ancient alliance, resurrected by the Arbiter to crush the last vestiges of the Covenant and its leader, Jul ‘Mdama.