Chronique:Canon Fodder - Calm in the Storm

Because why stop at one-hundred? That’s right, Canon Fodder is back and we’re here to talk about some cool new lore-loaded goodies headed your way soon. Not too long ago we announced a couple of Chief-centric stories hitting store shelves – the Halo: Silent Storm novel penned by the incredible Troy Denning, and the three-issue comic mini-series, Halo: Collateral Damage. Today we’re going to dive into the time period and focus of these new endeavors, sound good?

Both Halo: Silent Storm and Halo: Collateral Damage are set in a timeframe that features young John-117 and Blue Team shortly after the onset of the Covenant War. Both titles let us explore a new chapter in the Master Chief’s backstory as the Spartan-II strike team learns how to rely on each other to survive – a feat far beyond most normal run-of-the-mill teenagers. In case you've missed it, here's our back-of-the-book details on Halo: Silent Storm:

2526. It has been almost a year since humanity engaged in its destructive first contact with a theocratic military alliance of alien races known as the Covenant. Now the hostilities have led to open war, and the United Nations Space Command understands virtually nothing about its new enemy. There are only two certainties—the Covenant is determined to eradicate humanity, and they have the superior technology to do just that.

The UNSC’s only hope lies with the Spartans: enhanced super-soldiers trained from childhood via a clandestine black-ops project to be living weapons. Their designated commander, Petty Officer John-117, has been assigned to lead the Spartans on a desperate counterattack designed to rock the Covenant back on its heels, and to buy humanity the time it needs to gather intelligence and prepare its defenses.

But not everyone wants the Spartans to succeed. A coalition of human rebel leaders believes an alliance with the Covenant to be its best hope of finally winning independence from the Unified Earth Government. To further their plans, the insurrectionists have dispatched a sleeper agent to sabotage the UNSC counterattack—and ensure that John-117 and the Spartans never return from battle....

We’re extremely excited about further exploring such a formative era for the Master Chief. Troy Denning has done an amazing job fleshing out an early-era story that showcases angles both familiar and new of John, his teammates, and the climate of the Halo universe early in the Covenant’s war against humanity. We can’t wait for you all to get a hold of it for yourselves.

Over the weekend, the Halo: Silent Storm cover was revealed and today, we thought we’d pull the curtain – and the camera – back a bit on this beautiful piece of art by renowned and ridiculously talented artist Christian McGrath (seriously, check out his portfolio). 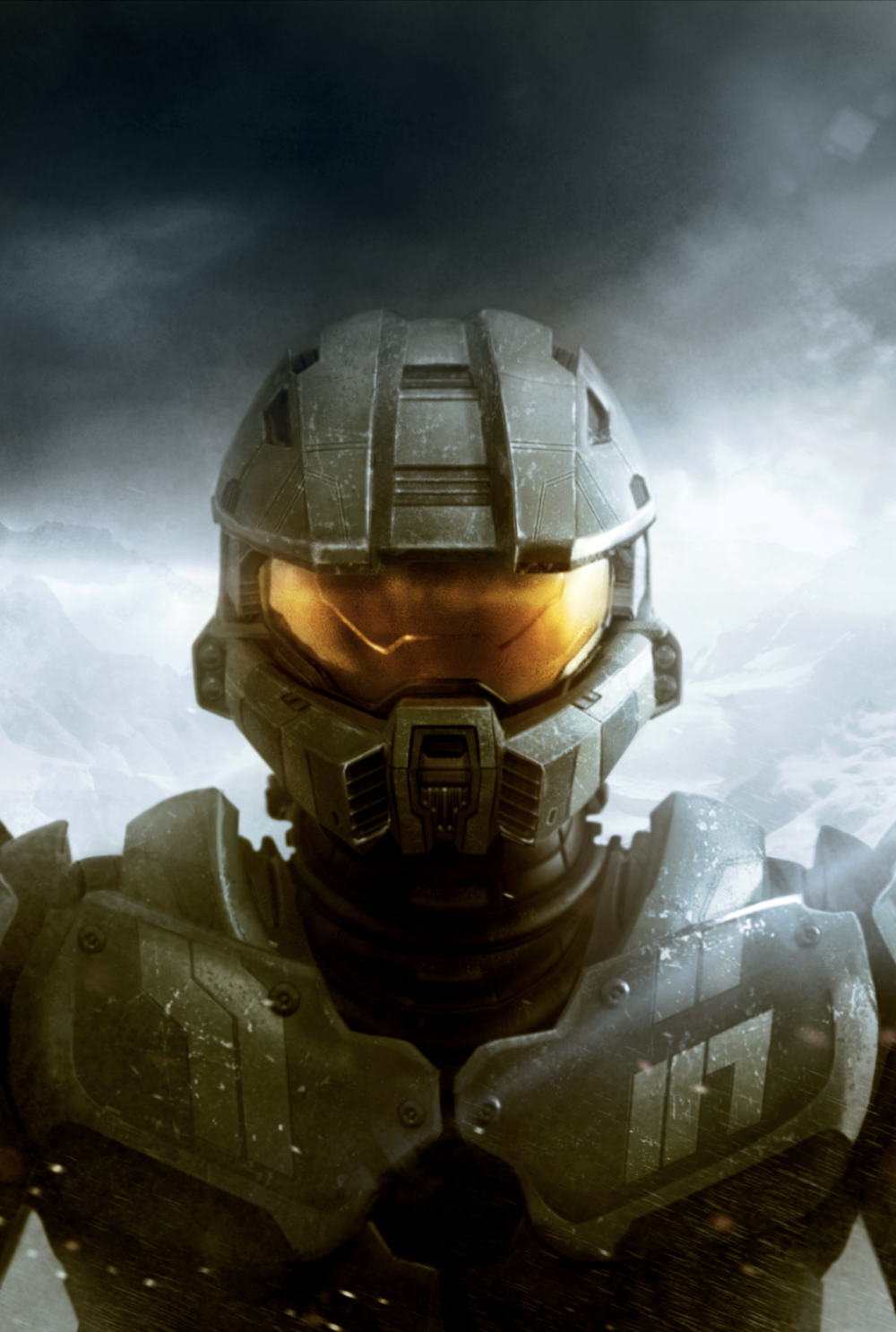 Christian manages to capture an amazing and unique “in the flesh” visualization of Halo’s iconic hero that brings to life this particular early Mjolnir iteration with a believable and rugged realism. It’s a very cool contrast to the bright and vivid colors on display when Dave Crosland gives the killer carapace his own treatment in the comic series.

Do you realize how expensive this gears is, son?[modifier]

Oh indeed, we do. So, about that armor. These particular stories feature specialized variations of Mjolnir armor, as new strategies are explored in an effort to stem the overwhelming Covenant military force. This early armor was designed to augment each Spartan as they grew into their areas of expertise.

We’ve also seen a few musings around the more detail-oriented members of the community regarding specifics that set this variant apart from what they might consider as "established" Mk.IV. As described in Halo: The Fall of Reach, Spartan-IIs often fought in nigh-indistinguishable armor, particularly in the early days of the program. As you can see below, Halo: Collateral Damage also showcases this as well. 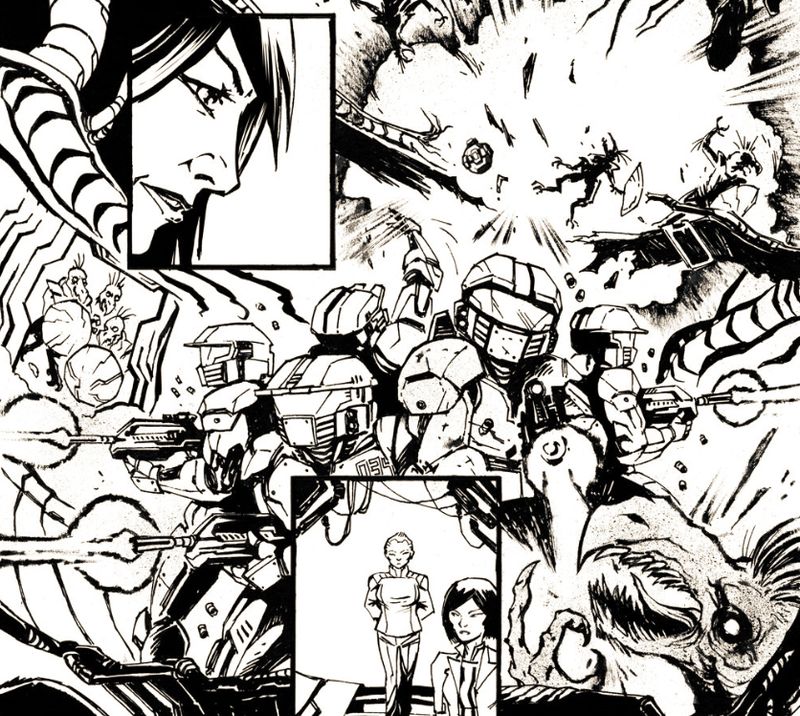 Also I've said it before, but I’m a big fan of this awesome comic stylization, first seen in the Halo: Tales from Slipspace graphic novel.

Fans might also note that Halo: The Fall of Reach comic series from 2010 gave us some of our first indications that S-IIs also would employ the use of custom helmets, attachments, and armor modifications. 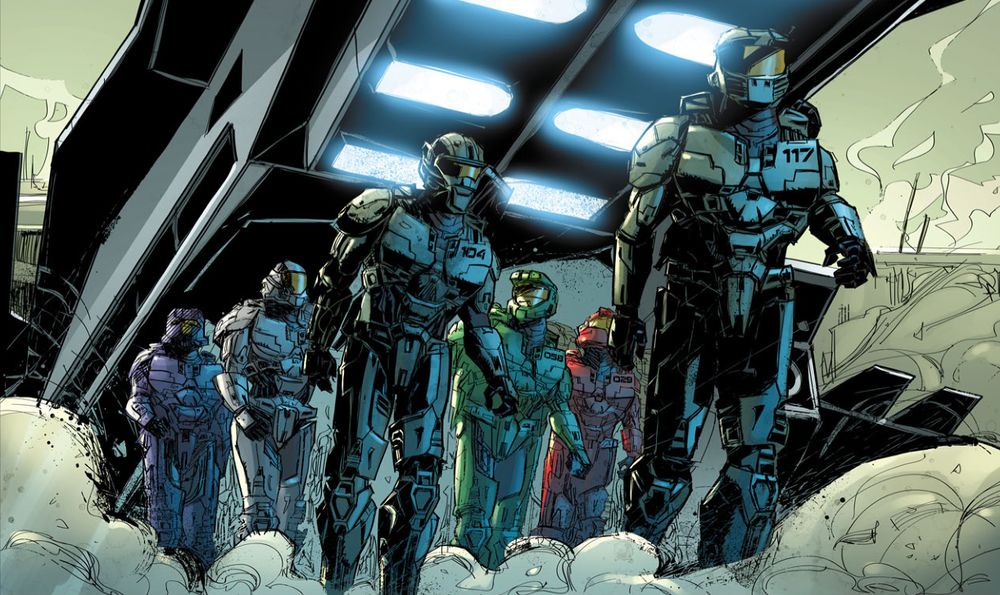 From Halo: The Fall of Reach novel we also see that while Mjolnir could indeed cost “as much as a starship,” the UNSC was plenty well equipped enough to have more than a handful of examples on hand – not to mention that they did also produce a whole bunch of starships back in the day…

“Dr. Halsey sat in the copilot’s seat, ﬁdgeting with her space suit. In the aft compartment were the Spartans, the three technicians from the Damascus facility, and a dozen spare MJOLNIR suits.” – Halo: The Fall of Reach, pg. 142

Another thing to note, modifications and experimental systems modules, attachments, or chassis alterations do not necessarily equate to building an entirely new suit of armor. These things were meant to be whatever they needed to be to get the job done – as specialized and flexible as the legendary warriors that donned them. This flexibility is explored a bit more visually in Halo: Collateral Damage, where different members of Blue Team are given various individual upgrades designed to enhance personal attributes to coincide with particular mission parameters.

As another fun note, page 10 of Halo 4: The Essential Visual Guide published back in 2012 notes that Chief’s most recent armor “resembles an earlier line of Mjolnir Mark IV.” One does wonder…

At the end of the day, Mark IV was an expansive platform that included an extensively diverse line of features that lasted for decades. It's also important to point out that the "Mark" delineation nomenclature didn't really even come firmly into play until 2535, as noted here in the Jan 7 entry in Halsey's Journal (published in 2010). So in reality, the range of variation possible in the opening decade of the Mjolnir program allows for potentially even more variation than we've seen already.

Halsey notes that "continuous upgrades are integral to the MJOLNIR system as a pioneering effort to shatter technological barriers..." and being frustrated at being told it was "no longer possible," directly implying that what had been the norm was now in danger of changing. Halsey puts it best: "They'll get their tidy generations of armor on paper, but my Spartans will get the best I can give them." Suddenly I'm not sure if she's talking to folks in 2535 or 2018. ;-) 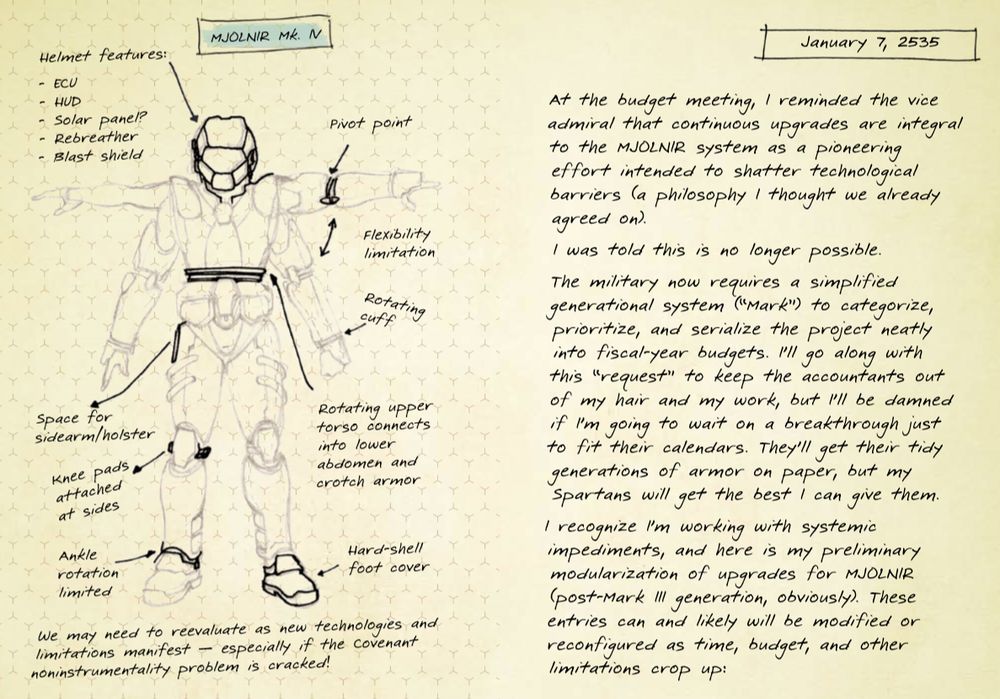 Mjolnir musings aside, Halo: Silent Storm gives a brand-new generation of new Halo fans the chance to experience their own “Fall of Reach” moment alongside seasoned universe veterans. In fact, I’d actually love to issue a challenge to folks our local denizens: This September when you pick up your copy of Halo: Silent Storm, suggest the book to someone new to Halo – whether they play video games or not.

Remember the incredible feeling you had when you first thumbed through the pages of the Master Chief’s early adventures nearly two decades ago and use this new book to inspire a brand-new person to share in our collective passion. These types of stories have the unique opportunity to help introduce our hero to a whole new audience, and I’d love for regular readers of this space to be on the forefront of such an evangelical effort.

Halo: Silent Storm will be released in hardcover format on Sept 4 later this year, and you can preorder yours right HERE.

Issue #1 of the Halo: Collateral Damage comic mini-series from our friends at Dark Horse will be releasing later this Spring on June 6. Preorder the first issue HERE, and Issue #2 (the cover art of which we revealed in last week’s Halo Community Update) right HERE.

A common question we get from the canon-curious is “what are those ships on the menu screen of Halo 5: Guardians?” Ignoring the fact that you’re probably not talking about the UNSC Infinity looming in the foreground – or the secret Winter-class prowler that discreetly drops into cloak as it descends from the hangar bay every so often – you’re likely the Anlace-class frigates.

We’ve mentioned them before in a few scattered spots, but thought that today might be a good time to randomly bestow some rather lovely concept shots of the primarily-post-war craft for those interested in additional reference. Also, it would be mean of us to do so without also adding a bit of additional lore context, right?

The Anlace-class are escort frigates which accompanied the UNSC Infinity during its deployment to Kamchatka in October 2558. Their design is considered somewhat novel for the Navy, with a lifting body hull and maneuvering systems well adapted for atmospheric operations. Offensively, the Anlace-class lacks a spinal MAC and missile pods in the most common configuration, relying on directed energy weapons for sustained combat operations between resupply.

There you go! Now let’s take a look at that art. 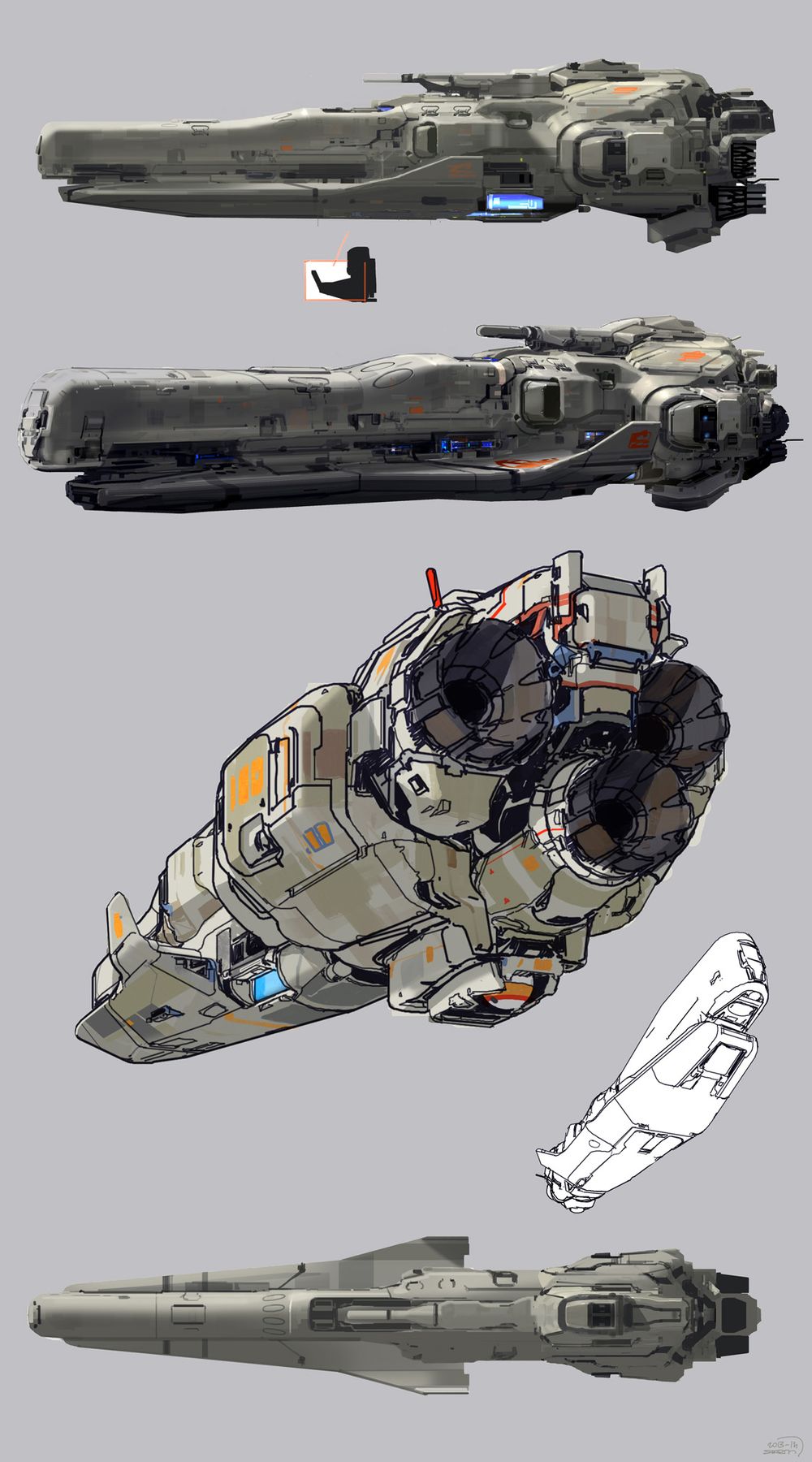 343 Franchise Writer Kenneth Peters wanted to pass along some words of wisdom to offer insight into a question he’s been getting a decent bit recently in community circles.

Are the covenant CCS-class patterns differentiated by their fin configurations?

No, although the sensor vane layout is often a way of helping to differentiate between different patterns. For example, if you look closely most of the battlecruisers you see in Halo 3 are actually different from than the Ket-pattern Truth and Reconciliation described in Halo: Warfleet (pp. 62-63), despite their similar fin arrangement. 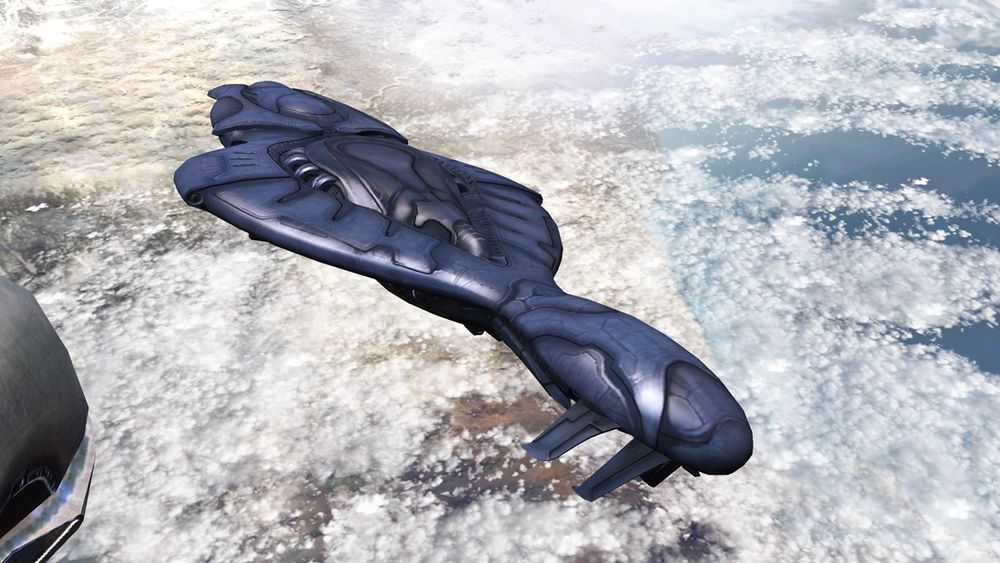 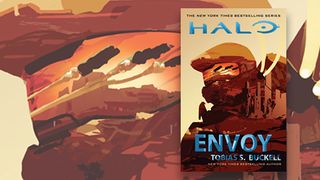 The fine folks at Halo Podcast Evolved recently celebrated their 150th issue by interviewing one mister Tobias Buckell, who halo fans should recognize as the author of stories like Halo: Cole Protocol, Halo: Envoy, as well as short stories like "Dirt" and "Oasis."

Before we go, word has it that renowed illustrators Hans Jenssen and John R. Mullaney are giving collectors a rare opportunity to purchase their illustrations of iconic Halo warships, as featured in Halo: Warfleet These are the original inked and colored cross-sections, hand-crafted by the artists with exacting detail and care. We have it on good word that Hans and John would love to see the assembled works in the hands of a dedicated Halo fan (or group of fans). If you fancy owning a piece of Halo history, you can get in touch with Hans and John at http://www.hansjenssen.co.uk/contact to discuss specifics. May it find a happy Halo home!

That will do it for us this time around, folks. Thanks so much for joining us and keep an eye out for more cool content about these (and other upcoming) awesome new additions to the Halo universe. We’ll see you soon!

Until next time… Live well, play Halo, and can you believe I went this entire issue without a single Dalmatians joke? Wait...

P.S. If you didn't catch it the first time around, don't miss our most recent Halo Lore Stream where Kenneth Peters and yours truly dive into the Halo Array. Check it out!