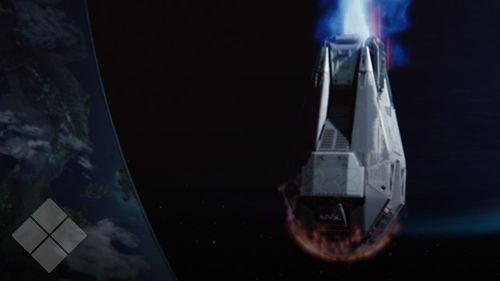 Hello again, faithful fictionistas. Welcome back to another issue of Canon Fodder! Hopefully, you’ve been having a literal blast playing through the recently added Halo 3: ODST campaign within Halo: The Master Chief Collection. Last week, we took a quick look back on the fan-favorite campaign, and helped set the stage for where it fits in to the overall Halo narrative. This week, as I find myself in sunny FL for a few days, I thought it might be fun to dive a bit deeper to take a look at some of the more intricate aspects of the title, as well as how it ties into further Halo fiction releases. Plus, we get to talk with the lead creative mind behind Halo 3: ODST, the one and only Joseph Staten, so that’s cool too, right? Read on!

As you saw in last week’s issue, we recently released a video that saw Mr. Staten sit down with 343 Industries’ Max Szlagor to talk about some of the game-design aspects of Halo 3: ODST. If you haven’t seen it yet, definitely go and check it out. For our purposes around these parts though, I thought it would be cool to chat with Joseph about more of the narrative and story-driven nature of the game's campaign. Here’s what he had to say…

GRIMBROTHER ONE: So what was the process like to develop the characters both as a team as well as individuals, from the differences in their gear to their varied personalities?

JOSEPH STATEN: We started with the basics: we wanted a well-rounded squad of ODSTs with different skillsets that would enable unique gameplay scenarios. For example, we planned early on that one of the missions would focus on destroying a building to keep it out of Covenant hands, which meant one of the ODSTs would have a be a demolitions expert, and that went a long way to defining his gear, etc. Because we wanted to tell the story from multiple points-of-view, we knew our ODSTs’ personalities and voices had to be as unique as possible so players would always know which ODST’s boots they were jumping into. I really wanted to write for specific actors as much as possible, so we cast our characters early in the development process. Once I knew we were lucky enough to get Nathan Fillion and Halo 3: ODST’s other great actors, I was able to dial-in all the personalities from there.

GRIM: Which of the characters do you identify with the most personally? Did that influence your writing in any way?

JS: I’d like to say Buck, because who wouldn’t want to be more like Nathan Fillion? But honestly I most identify with the Rookie, the voiceless primary protagonist of the game. Often times, making a game is like being lost, at night, in a dangerous city after your best laid plans have gone horribly awry. You learn pretty quickly that you can’t make it out on your own. This understanding of the importance of teamwork not only affected the game’s story, it guided how we worked. The reason ODST turned out as well as it did was because, more than anything else, we cared as much about each other as we did about shipping a great game.

GRIM: Couldn’t agree with that analogy more! Now in regards to the campaign itself, how was it writing a story designed to be a bit more modular, and less linear, than a typical campaign narrative?

JS: I really enjoy writing stories with different POVs, and given ODST’s smaller team size and tighter production schedule, it made sense to create a story that was easily chunked into pieces—expanded or contracted as needed. During the first three Halo games, we learned some hard lessons about how difficult it is to alter a purely linear story. Because we started ODST with a “maximum flexibility” mandate, we ended up being so efficient that we were actually able to tell an even more expansive story than we originally planned, specifically adding “Sadie’s Story” to the nighttime, free-roam city.

GRIM: Speaking of Sadie, what was it like to tell this “story within a story”? And more generally, were there any challenges or adventures in getting ODST’s story to line up with the larger Halo narrative?

JS: We had great partners working with us on Sadie’s Story: Elan Lee and Sean Stewart, who we’d collaborated with on the “I Love Bees” ARG for Halo 2. After talking with them about where ODST fit in the Halo timeline, they pitched a great idea for telling the civilian side of the Covenant invasion of New Mombasa. The biggest adventure was probably convincing Marty to record and produce Sadie’s hour long radio play after I’d already given him the full court press to make “smoky saxophone” the signature instrument of Halo 3: ODST’s soundtrack. But all kidding aside, we intentionally picked a blank part of the Halo timeline for ODST, so the challenge wasn’t so much, “What are we going to break?” But rather, “How much awesome new detail can we put into this gap?”

GRIM: I think “a whole lot” would be the correct answer there, and I’m sure countless Halo fans would agree. Looking back on the story now, what are your thoughts on how beloved those characters and that story have become over the years?

JS: Certainly the great cast of actors is a big part of it. But ODST also tackled emotions and themes that the other Halo games didn’t. It’s a more intimate story, less focused on “saving the galaxy” than “saving the people (and city-controlling super computers) you love.” While it’s hard not to look back on the story and focus on all the things I could have done better, it’s a real honor whenever someone tells me that ODST is their favorite Halo game. It was certainly my favorite one to work on, and I really hope people enjoy playing the remastered edition.

GRIM: Oh I have no doubt they will. Thanks so much for joining us! 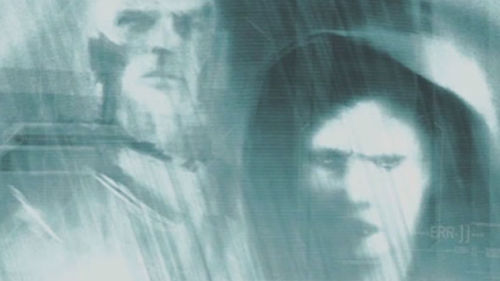 As you explore through the streets of New Mombasa during the Halo 3: ODST campaign, you might hear a phone ring, a faint voice, a peculiar sound. These cues just might lead you to one of the 30 different audio logs scattered throughout the game; audio logs that – as mentioned by Mr. Staten above – tell a very special and unique story within the Halo universe. The story takes a look at the Covenant invasion from the perspective of a young civilian, Sadie Endesha, and through the eyes of the Superintendent – an AI designed to manage and monitor the city as a whole. As you collect the various logs, you’ll be treated to an audio drama not all that unlike the #HUNTtheTRUTH campaign that many of you have been enjoying recently. Accompanied by images created by legendary artist Ashley Wood, “Sadie’s Story” leads fans on a surprisingly personal Halo journey, but one that has resonation throughout the larger Halo narrative. In fact, players familiar with the “story within a story” were pleasantly surprised when they read Halo: New Blood. If you’ve checked out one but not the other, now might be the time to take the plunge! And speaking of connected fiction… 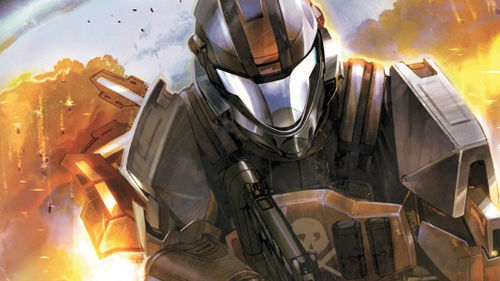 The Halo 3: ODST “drop in the pond” has ripples that radiate both before and after the events of the game itself, and there are a variety of pieces of Halo fiction that can help you put together pieces of a much larger story. Whether you are a new fan or a grizzled veteran, we thought it might be useful to surface a few of those scattered stories. If you are a fan of ODSTs, you should definitely check these out!

One of the episodes in the animated anthology Halo: Legends, “The Babysitter” centers around a squad of ODSTs stationed on the UNSC Kronstadt, a squad that includes Taylor “Dutch” Miles. When the squad is paired with a Spartan-II, Cal-141, on a mission to assassinate a Covenant Prophet on the planet of Heian – as well as investigate the world’s mysterious ancient ruins – tensions are strained and puts every member to the test in order to complete the dangerous task at hand.

Written by Peter David and visualized by artist Eric Nguyen, Halo: Helljumpers is a 5-part comic series focusing on ODSTs Taylor “Dutch” Miles and Kojo “Romeo” Agu. When the colony planet Ariel sends out a mysterious distress signal, Dutch and Romeo find themselves at the center of mysterious new conflict. Before it's solved, they'll have to put their friendship - and their lives - on the line. This story gives some great insight into the personal history between these two teammates, as well as a deeper look into their own respective backstories.

“Dirt” is found within the anthology “Halo: Evolutions,” and written by Tobias Buckell. “Dirt” focuses on a veteran ODST, Gage Yevgenny, as he chooses to spend his final moments recounting his life to a young ODST – from his experience fighting human insurrection to the throes of the human-Covenant war. The young ODST is one that fans will come to know as the Rookie.

Halo 2/Halo 2: Anniversary – “Another Day at the Beach”

In the opening cutscene of the Halo 2 level "Outskirts," we see three UNSC Pelicans carrying troops into battle over Old Mombasa. When a Covenant Scarab suddenly emerges, it immediately destroys one of the dropshops, leaving two remaining. One of them - carrying both Sgt. Johnson as well as the Master Chief - escapes relatively unscathed while the second, carrying a squad of ODSTs led by Sgt. Marcus Stacker, takes fire and goes down. This special cutscene - originally included with the Halo 2 Multiplayer Map Pack - shows fans the fate of these heroic helljumpers. Check it out on the Halo Channel!

Written by Matt Forbeck, Halo: New Blood focuses on the ODST squad of Alpha-Nine after the events of Halo 3. It’s an incredibly emotional journey as every member of the squad will see their future affected in powerful ways by the end of its story, and some fan-favorite characters will go through some very specific evolutions that will be felt across the Halo storyline.

Were it so easy (to be a voice actor)[modifier] 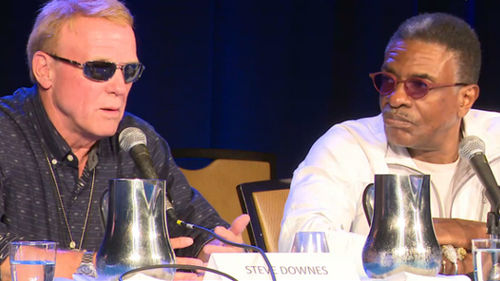 Our Pharaoh of Phabulous and virtuoso jazzhandist, Jessica Shea, made the trip down to Atlanta, GA last weekend for MomoCon in order to moderate a panel for the ages. Fiction fans won’t want to miss this VO-focused panel featuring legends Steve Downes and Keith David, the voices behind the Master Chief and Arbiter Thel ‘Vadam, respectively. It’s an absolutely inspiring look at their great journeys not just through Halo itself, but throughout their own diverse careers. You can find the archived panel here (note that the "copywrited audio warning doesn't effect the Halo portion of the video). Pop on some good headphones and enjoy the dulcet tones of our heroes! And yes, I’m including Jessica in that group.

Well folks, that will just about do it for this week. Stay vigilant, Spartans, for a mighty storm is gathering strength and fast approaching… and we are hopeless to stop it. See you next time!

Until next week… Live well, play Halo, and when in doubt, blow up a sun.

The Needler is a compact, fully-automatic munitions launcher that fires shards of exotic crystalline material that home-in on targets and detonate.

An instrument of faith and fire, the Plasma Rifle was the signature weapon of the Covenant’s Sangheili warriors for centuries. It has become rarer since the loss of High Charity, but no less distinctive or respected.