Chronique:Canon Fodder - Second to None 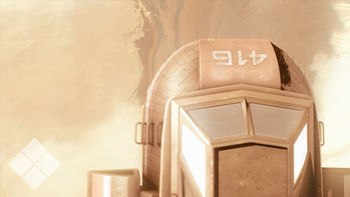 Welcome back, canonballers. In case you missed it, in last week’s issue we answered several of your deep-diving lore questions, and one about moas. If you were too distracted by all the g-lore-ious info in our Community Q&A, you might have missed the fact that we also announced that the Second Story content for Halo: Nightfall is now available as standalone content in the Halo Channel. This week, we’re going to dive a little bit deeper into what this content is, and how it sits in the universe.

The Second Story experience is an awesome feature built into specific content available on the Halo Channel. So far, both Halo: Nightfall and Red vs Blue: Season 12 have unlockable Second Story content exclusive to the Halo Channel experience. The Second Story collections found within Halo: Nightfall gives viewers a glimpse behind the curtain and into the underbelly of a tumultuous time in the Halo universe. Fresh off the Human-Covenant War, the galaxy is rife with colonies trying to rebuild, and factions steeped in mistrust. The Second Story experience comes in two styles: vignettes that explore a deeper and more personal side of the characters, and classified ONI EYES files that let you peek into the depths of humanity’s most clandestine corners. The fifteen episodes are now bundled into three distinct story arcs, with each looking at a specific angle of the overall narrative.

NIGHTFALL: ACQUISITION reveals the UNSC’s attempts to discern the methods and means by which a deadly new element was collected, trafficked, and ultimately employed against the colonists of Sedra.

NIGHTFALL: HUMAN ELEMENT brings you face to face with those most impacted by the deadly attack on the outer colony of Sedra. From the Alerian miners who harvested the lethal element, to exposed citizens whose lives will never be the same. From first responders on Sedra, to the ONI agents and Sedran Colonial Guard soldiers thrown into the middle of it all.

NIGHTFALL: INTERVENTION details the oftentimes harsh reality of ONI's constant involvement and meddling in effort to find ever-elusive answers by any means necessary.

That’s not even the full (second) story though; like many tales scattered throughout the Halo experience, sometimes there is evidence in the hardest places to find. For example, when Dr. Brynn Morad is trying to dig deeper into the situation surrounding the attack on Sedra during an autopsy report, she is unaware that her searches are being flagged and transmitted to an ONI representative known as CODENAME: FIXER. What might just look like insignificant headlines and articles pulled up on Dr. Morad’s data screens in “Trade Barriers” (Nightfall: Human Element) actually contain detailed insight into the plight of another colony world involved in the events of Halo: Nightfall – the dry and dangerous Aleria. Since it might have been difficult to catch from the viewer’s perspective, we’ve turned the tables on CODENAME: FIXER and pulled a classified data drop for you to get your eyes on, and your eyes only. So if you haven’t already checked out the Halo: Nightfall Second Story collection on the Halo Channel, go do it now! If you have, go do it again. You never know when there’s something you might have missed the first time around…

ESIL BOESIS FOUNDS MOLS’DESIAS
[… continues to see growth at an impressively rapid rate. In an unprecedented move to keep influence in the hands of the work force, mineral mogul Esil Boesis has founded Mols’Desias, a mining union that will help ensure stability and bargaining power for its constituents. Boesis hopes that the unification of what has historically been over a dozen fragmented private mining groups will provide long-term security for the profession.]

WORK FOR ALL
[… has some agriculturists understandably concerned about the future. But while the changing climate has certainly caused certain issues in the agricultural sectors, the resulting increased focus on mining Aleria for its rich mineral deposits has resulted in an overall influx of new employment opportunities.]

THE SANDS OF OUR FATHERS

[In the years following Aleria’s final rainfall, government officials continue to quell both political unrest and assuage the fears of the Alerian people…]

ALERIAN PLEA TO INNER COLONIES FOR SUPPORT FALLS ON DEAF EARS
[Despite numerous attempts to secure support from the UEG, the constant push from Alerian officials continues to go nowhere. Many Alerians seem split on where the blame lies. Whereas most are simply content to vilify the Unified Earth Government itself, other colonists, like Hicham Upadte, have turned their ire planetside. “They claim to call for help, but in reality they do nothing!” complained Upadte. “They want us to think that they aren’t being listened to, but they just want to keep all the power and influence to themselves. They sit on their hands while we lie in our graves!” While several Alerians interviewed agree that Upadte’s stance is not without merit, this sentiment certainly remains in the minority, as the lion’s share of colonists have no problem with blaming the UEG, viewing it as just one more piece of evidence to show that the inner colonies continue to be concerned only with their own welfare, most often at the expense of worlds like Aleria…]

THE FADING SHORES
[After decades without rainfall, Aleria’s rivers and lakes continue their rapid recession…]

DROUGHT AND TRADE TARIFFS MAKE ALERIA A HOT SPOT FOR ILLEGAL ACTIVITY
[With Aleria continuing to suffer from decades of drought – a period the colonists have coined “The Devil’s Kiss” – the colonial job economy has seen a drastic shift away from nearly every agriculturally based profession.]

TAREK BOESIS KILLED IN HIS HOME BY GANG
[Tarek Boesis, head of Mols’Desias, was killed in his home by members of the Alerian courier guild “Blackdust”. The notorious anti-union smuggling group is currently claiming responsibility for the crime which serves – in their words – “to bring retribution to those who were responsible for the silent deaths of countless thousands…” Tarek Boesis was the grandson of Esil Boesis, who founded the Mols’Desias mining union in 2349. Members of Blackdust claim that Mols’Desias forced Alerian colonists into lives of crime by monopolizing the job market and forcing workers to work impossible hours for very little pay. With almost no competition in the failing Alerian economy, many colonists feel they had “no choice” but to turn to more illicit activities – such as off-world smuggling – in order to make ends meet…]

THE CRY OF DISILLUSION
[EXCERPT UNAVAILABLE]

Don’t forget that we’re a mere few days away from the release of Halo: New Blood, the new Digital-First Short Novel by Matt Forbeck, from 343 Industries and our partners Simon & Schuster and Pocket Star Books. You can preorder right here to remove one more step between you and the new hot-dropping Halo experience featuring Gunnery Sergeant Eddie Buck and the rest of Alpha Nine. If you missed our interview with Matt go and check out Canon Fodder: Bam Said the Lady to get an early primer on what to expect. A bit after the book’s launch on March 2, 2015, we’ll be back with a few more questions and answers from Matt to discuss certain story elements revealed in the novel, once fans have had adequate time to obtain and consume the new info. For now, you’ll notice that this week’s Universe entries features Alpha Nine and their statuses prior to the events of Halo: New Blood, just to help everyone get up to speed.

Well folks, that’s all for this edition. After you check out the Second Story collections on the Halo Channel, stop by the Universe forums to tell us which arc was your favorite! We hope you’ll join us next week for more lore.

Until then… Live well, play Halo, and watch out for Zealots that roll elemental damage.