Greetings my fellow fictionistas! Last week we shared with you a beloved community corner for Halo fans. The community connection seemed apt, as this past weekend also saw the arrival of PAX Prime, spawning yet another annual pilgrimage for many a fan to Halo’s home turf in the Emerald City. As always, it was an incredible weekend for us to share with so many of you. Toasts were proposed, chocolate was shared, Spartans were suited, games were played, and memories were made. If you’ve never been out to PAX before, you should definitely add it to your bucketlist. Even yours truly was seen in the wild stealing moments with fellow Halo-lovers, basking in the glow of a shared passion that keeps us coming back for more. This week we’ve got a few cool items on the docket certain to be of interest to many of you, especially for the story lovers. At least that's certainly our... intent. 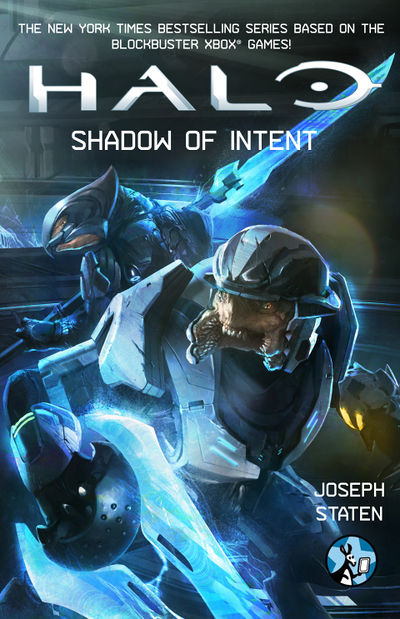 Since we first announced our 2015 print lineup earlier this year, many of you have been waiting very specifically for more details on Joseph Staten’s return to Halo. Staten was one of Halo’s lore leaders for many a moon, and from his knowledgeable noggin has sprung forth several of our franchise’s most memorable moments and mysteries. With that in mind, we are incredibly pleased to share with you the premier reveal of the cover art and story description for Halo: Shadow of Intent, coming to you December 7, 2015 in partnership with our friends at Simon & Schuster.

After decades of grim combat against the humans and then the traitorous Covenant Prophets, the Sangheili warrior Rtas ‘Vadum—the Half-Jaw—has earned a long rest. But not all of the Prophets perished in their holy city, High Charity, and now one of their fearsome Prelates has sworn his vengeance. This powerful threat has set a cataclysmic plan in motion—a plan to lure the Half-Jaw into a trap that will herald the utter destruction of the entire Sangheili race…

Needless to say, we’re pretty stoked for fans to get their hands on this addition to the Halo universe this holiday season. Trust me, it’s gonna be good. Stay tuned and keep your eyes peeled to these very pages for more info as we get closer to release, but for now, enjoy the awesome cover by talented artist David Bolton. The cover showcases everyone’s favorite shipmaster, Rtas ‘Vadum, as well as another mysterious Sangheili warrior, though you’ll have to wait a bit longer to learn more about her…

While the highly anticipated digital novella won't be out until December, you can preorder it right here, right now. Go do it and let us know how excited you are! And in the meantime, click the image on the right to put an even bigger smile on your face.

In case you were living under Castle Base with no internet connections earlier this week, on Monday night we unveiled the opening cinematic for the Halo 5: Guardians campaign. Built from in-game assets that feature a cinematic sheen courtesy of our friends at AXIS Animation (from Halo 4: Spartan Ops fame), this high speed opening act properly introduces fans and players to Fireteam Osiris, and further puts into perspective just what a talented team of Spartans are capable of. The scene showcases our GEN2 Mjolnir-clad combatants hot dropping through the Kamchatcka skies into the thick of battle which sees Jul ‘Mdama’s Covenant contingent locked in conflict with reawakening Forerunner forces. Keen-eyed flight-fancied fans certainly have taken note of some as-of-yet-unfamiliar ship shapes dominating the snow-white warscape. While we aren’t going to go into any airborne details at the moment (sorry Grizzlei!), we do plan on revisiting this particular subject matter in the near future within these pages, so stay tuned. In the meantime, if you’re like me you’ll rewatch the opening over and over, irrationally convinced that eventually Fireteam Osiris isn’t going to be quite fast enough to avoid the cascading wreckage of that Sangheili blockade runner. Ah see, I’ve already said too much… At any rate, enjoy! 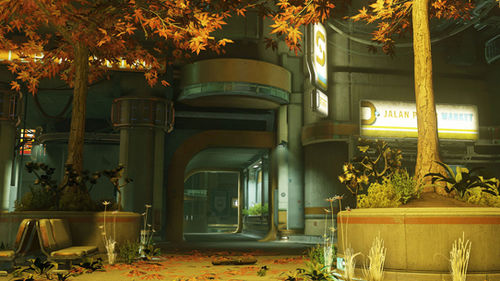 Speaking of Halo 5: Guardians, I don’t suppose any of you would like to learn a new bit of multiplayer map lore, would you? Well, we might as well go ahead and provide some, just in case. This week, we turn our attention to a new Arena map called “Plaza.” What’s the story behind this new playspace? Let’s find out!

Andesia's exploration was funded by biotech consortiums looking to exploit the planet's rich ecosystem for life-extending pharmaceuticals and exotic foodstuffs. Colonization was followed by development of local medical research and ultra-tech industries in Noctus and the research center of Promesa.

Though it remained under UEG control, a powerful Insurrection presence took root in the early 26th century. Periodic UNSC police actions kept violence from breaking out into full-scale civil war, but turf wars between rebel factions, their criminal allies, corrupt security forces, and UEG peacekeepers ensured there would be no peace on Promesa's streets.

Now some fans might actually recognize some of Plaza’s visuals from media galleries we released during Gamescom, though this is the first time you’re getting eyes on the fictional focus for this simulation’s setting. If you want to see even more, don’t forget to check out next week’s episode of The Bulletin, where Jay-Fresh himself will give his personal thoughts on the map as well as show it off in glorious motion.

And with that, dear friends, we draw to a close. Next issue we’ll have more cool stuff to share, so don’t wander off too far!

Until next week… Live well, play Halo, and if you ever have questions about the Halo universe, you know where to turn.

Tribute was known for its thriving industry until it was partially glassed by Covenant forces in 2552.

Requiem was the first Forerunner shield world created as a fortress for the Didact, the Protector of Ecumene.