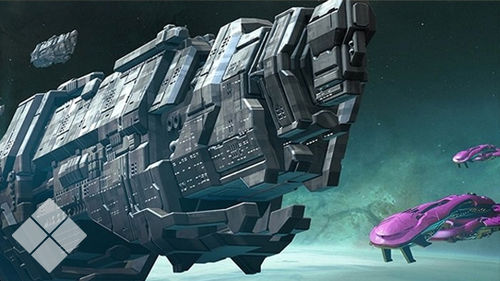 Welcome back, fiction fans! Last week, we celebrated science and marveled at the human achievement of sending a 21st century spacecraft to Pluto. This week, with the release of the highly anticipated Halo: Fleet Battles, The Fall of Reach tabletop game, we celebrate the opportunity for fans to be able to command 26th century spacecraft in the throes of the human-Covenant War. In order to bring you the latest and the lore-iest news from the front lines of Fleet Battles, I caught up with a couple of the folks instrumental in bringing the epic ship-to-ship engagements of the halo universe from the depths of space to your awaiting tabletop. Let’s start with Creative Director for the UK-based Spartan Games, Neil Fawcett… 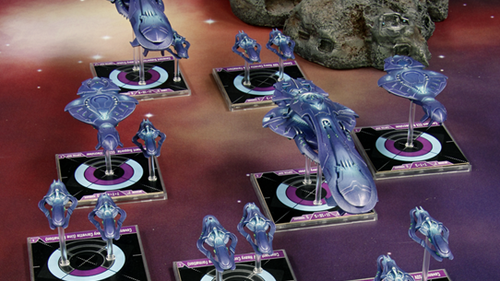 GrimBrother One: Spartan Games already had an impressive tabletop pedigree coming into this project. What has been your favorite aspect of working in the Halo universe in particular? Any specific ways that the Halo sandbox has excited or challenged the SG team?

Neil Fawcett: Wow, what a question…Where to start? Can I write a few thousand words as an answer!? Personally I have been blown away by the way the team at 343/Microsoft have allowed us to literally play in their ‘sandbox’; the way we’ve been allowed to contribute to the dialogue. The close cooperation with my design team by 343 made our lives a lot smoother, and massive fun. I mean, we got access to years and years of concept work. How cool is that?!

Being able to make models of ships that have just been ‘talked about’ is something that makes my 3D artists very happy – which is always a good thing. They’re huge Halo fans and being able to realize brand new designs – the ORS Heavy Cruiser and Epoch-class Heavy Carriers being great examples – is a dream come true for them.

As to challenges, well we’ve got a fantastically well-established product and canon to live up to, with millions of fans, so we really had to lift our game to make sure we got it right. But the assistance we got, especially from folk like Kenneth [Peters] and Rick [Achberger], just made it come together. We couldn’t have done it without the entire team at 343 Industries supporting us every step along the way. 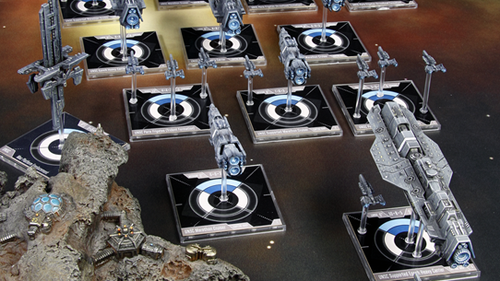 GRIM: Throughout your testing of the game internally, are there any particular strategies or play styles that have become specifically popular?

NF: UNSC players just can’t hang about. They need to Hard Burn their engines and get in close, pound the Covenant ships with MACs and get as many Vulnerable Tokens on the enemy as possible. Picking on the CCS Battlecruiser is a good thing, its lack of a Cloak makes it a prime target for Archer Missiles at long range. But don’t get too close!

As for the Covenant player: protect the CCS as it is a perfect partner for the SDV Heavy Corvettes, and when you get your ORS Heavy Cruiser in close just enjoy the mayhem! Don’t obsess with the larger vessels, if you see a large battle group of frigates, make sure you deal with them…together they can sting.

And for both players, don’t forget about your boarding actions, they’re the truly cinematic moments of the game. Just the mental image of a Spartan rampaging through a Covenant vessel after a boarding action makes me want to roll some dice. 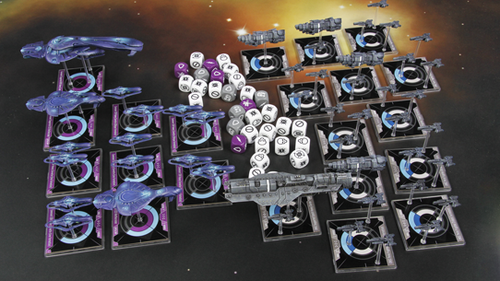 GRIM: Time for truth… who is the best Halo: Fleet Battles player at Spartan Games?

NF: Ah, that has to be one of the core writers, Derek Sinclair….although I reckon he cheats. J Funnily enough Ricky Brewer, one of our marketing guys, hasn’t lost a game yet. Bit of a dark horse that one.

GRIM: Now that fans are finally getting the game into their hands, what are you most excited about as you turn your attention towards the community?

NF: I just want to see how folk paint their models, read their battle reports, look at their home grown scenarios and read the talk on the forums. As the game grows we will be hosting a number of cool events, and as we run them we’ll get a chance to talk to players about the game and future developments. It is very satisfying to watch a gamer play Halo: Fleet Battles, pull off some super cool battle sequence and watch the expression on their faces as they roll the dice and crush their opponent!

GRIM: Any tasty hints about what the future might hold for Halo: Fleet Battles?

NF: That question made me smile, but then again I know what is coming! We’ve made the Covenant Assault Carrier, just had Sparth sign off on our UNSC Valiant-class Super Heavy Cruiser, started the detailing work on the UNSC Trafalgar supercarrier, and the list goes on. We’re just scratching the surface of ship engagements, we’ve got decades of excitement to turn into game material. I mean, just wait till we make Infinity available, or the Phoenix-class…

We’ve got ideas for models and books up and down the Halo timeline. Plenty to keep us busy for a long time to come!

One of the individuals Neil recognized in the chat above is Kenneth Peters, an exceptional brain-cog in the mind-machine that is the 343 Franchise Team. Ken was instrumental in helping Spartan Games truly understand and wrap their heads and designs around the core Halo fiction, specifically from a 26th century perspective. With that in mind, we thought it would be cool to give you a peek into his perspective on the project as well… 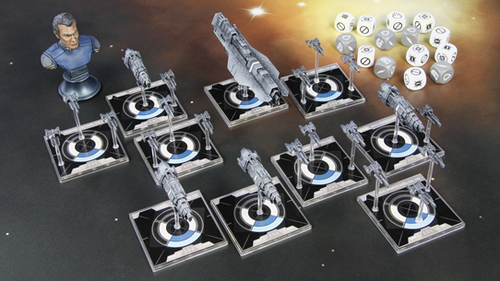 GRIM: So tell us a bit more about the fictional setting for this opening salvo of Halo: Fleet Battles…

Kenneth Peters: The campaign scenarios included in Halo: Fleet Battles cover a roughly two-month period before the main Covenant fleet arrives to assault Reach. These events are mostly from Rho [‘Barutamee]’s perspective and provide some context and insight into Covenant activities during the events of Halo: Reach. However, this is not a day-by-day breakdown of the Covenant irruption in the Epsilon Eridani system, as the goal was to select interesting events where the scenario wouldn’t lead to lopsided games.

GRIM: Will there be any new fiction or events introduced into or expanded upon in the canon? How does it fit in with what fans already know through previously released media?

KEN: On the fiction side, we shine a light into how Rho ‘Barutamee’s Fleet of Valiant Prudence located Reach and their motivations for operating independently of the larger Covenant forces. This material was primarily sourced from Halo: Reach documentation written by Frank O’Connor, Robt McLees, and Marcus Lehto. And yes, there’s still plenty of information we didn’t have time or space for (or simply decided against including). All fiction and canon elements are sourced from our side [343 Industries]. 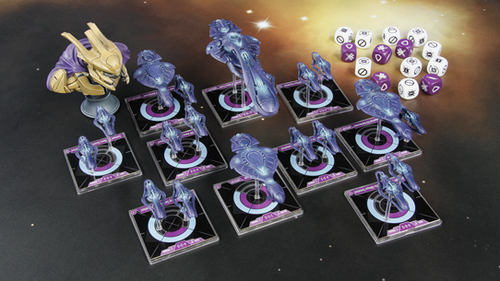 GRIM: How were the new ships created?

KEN: Strictly speaking, no “new” ships have been created for Halo: Fleet Battles. The Story Bible, books, concept, and game design documentation includes information on a number of fleet vessels that for various reasons have either never been visualized or didn’t have a detailed 3D model. For example, the Trafalgar is described but never visualized, while the Halberd-class destroyer is visualized but didn’t have a 3D model. Spartan Games needed to generate both concept and models in some cases (ORS Heavy Cruiser), in others we could provide detailed concept and reference but no models (DSC Support Ship), and in yet others we had both high-resolution models and reference they could work from (CAS Assault Carrier).

We don’t invent ships simply to fit a game role in Halo: Fleet Battles - which certainly complicated the job of Spartan Games - but in the end we feel this is actually more interesting, canonically consistent, and leads to emergent tactics and gameplay that better reflect the Halo Universe and historical events. The UNSC had to fit a lot of square pegs in round holes during the Covenant War, and the Covenant eschewed strict specialization and optimum combat efficiency entirely. Part of the fun of Halo: Fleet Battles is putting yourself in the role of UNSC commanders and Covenant fleetmasters and answering tactical questions with what’s available at hand!

Gameplay wise we left ship stats up to Spartan Games, with reviews and playtesting at the studio to ensure that everything stayed within the bounds of the franchise with regard to look and feel. This was the only truly contentious aspect of the development, as we treated Halo: Fleet Battles exactly like a mainline Halo video game with regard to quality and consistency. This meant that even the name of the game, logo design, and art selected for the terrain cutouts required extensive review loops and consultation with stakeholders on the game teams. Sometimes we had to force key changes in the game based on these playtests and reviews - as was the case with the original rules for shields (which had bleedthrough damage). However, we were in direct contact with Neil and the team at Spartan Games, which meant that rule changes and art notes could be quickly iterated on and discussed.

GRIM: Might there be new areas of the Halo universe explored through this medium in the future?

KEN: There already is, from the visualization of ship designs, revealing backgrounds of key historical characters, to the deeper exploration of esoterica such as UNSC Navy fleet organization in the tailing end of the Human-Covenant War. We’re very happy with how the collaboration with Spartan Games worked out and will have more to reveal in upcoming Halo: Fleet Battles expansions. Stay tuned!

GRIM: Stay tuned indeed… Thanks so much for joining us! 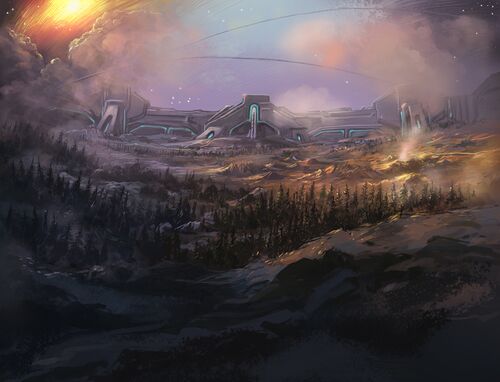 As a special treat for our readers, Spartan Games' Neil Fawcett thought it would be cool to share a piece of concept art produced by his team. Based on an original Bungie concept, this particular piece depicts the Sangheili hunting grounds found within one of the Covenant's agricultural support ships. It's a beautiful look at one of the inner aspects of life within the Covenant empire. Hope you enjoy it! (Click to make big)

Halo: Fleet Battles is available right now, and you can order it right here. And we're just getting started highlighting some of the hidden gems you'll find in this new Halo experience. In addition, as the game gets into the hands of the community and fans start building their own fleets, we’ll be looking to highlight your own paintjobs, displays, and massive armadas of UNSC and Covenant spacecraft. Keep an eye out on this space for more details in the future on how to have your personal fleet highlighted here!

Speaking of releases, it’s a busy couple weeks for Halo fans, as the next week also sees the release of Halo: Saint’s Testimony on July 27th, and Issue 20 of Halo: Escalation on July 29th. So set your calendars and get your lore on!

That will do it for us this edition. We hope you enjoy your weekend, as well as a brand new look at the two commanders currently taking center stage in Halo: Fleet Battles (see below).

Until next week… Live well, play Halo, and don’t forget to enact the Cole Protocol if your ship is all but lost.

Michael Stanforth was the head of ONI Section III during the planning and implementation of the SPARTAN-II program, and was ultimately in charge of all Spartan-field operations early in the Human-Covenant War.

Rho ‘Barutamee is Supreme Commander of the Fleet of Valiant Prudence – an archaeological research and retrieval group tasked by the Prophets with the security and stewardship of Forerunner artifacts.