Welcome back, loyal loreists, and thanks for joining us for another edition of Canon Fodder. This week we’re all over the proverbial star map, with updates on Universe, some social media seek-and-finds, a bit of TRUTH-sleuthing, and a bigger and better look at the recently revealed cover of Halo: Hunters in the Dark. If that wasn’t enough, as promised, let’s kick things off with another small chat with Halo: New Blood author Matt Forbeck. Read on!

Also, in case it wasn't obvious, the following section will absolutely contain spoilers for Halo: New Blood. If you don't want to be spoiled, AVERT THINE EYES!

GRIMBROTHER ONE: Halo: New Blood features some pretty fantastic interactions between Buck and a variety of other characters such as Veronica Dare, Jun-A266, and the ODSTs of Alpha-Nine. What can you tell us about portraying the dynamics of those interactions?

MATT FORBECK: The groundwork for most of those relationships were laid down in Halo 3: ODST, of course. In Halo: New Blood, I had the chance to dive into them and explore them all in far greater depth. In most cases, it was just a matter of figuring out who these people were and what they thought of each other—and then watching those feelings evolve and grow over time. The real exception to this was Jun, who hadn’t had much to do with Buck before this book. They start out at odds in the story and grow to respect each other as they go. The scene in the bar on Draco III is one of my favorites. There’s no action in it at all – it’s one of the quieter moments in the book – but it reveals so much about both Buck and Jun and how they work.

GRIM: Halo: New Blood includes a sudden and tragic end to the Rookie, a character that players played as in Halo 3: ODST. Can you tell us a bit about what it was like to craft the Rookie’s demise, as well as the other characters’ reactions to it?

MATT: That was a hard one because you spend a lot of Halo 3: ODST in the Rookie’s boots, and you get attached to him. But death is a huge part of war – even when you win – and I felt we had to show that in the story. Still, I wanted to send the Rookie off in a way that would mean something and have a long-lasting impact. That’s the beginning of the end of Alpha-Nine right there. You can trace much of the other tension in the book right back to that defining moment, and it’s what leads us naturally to the betrayal at the end.

GRIM: How do you see the SPARTAN-IV program in comparison to the ODSTs, or even the other SPARTAN programs themselves?

MATT: If you read the last chapter in the book, I think that says it all. The thing I like most about the new Spartans is that they’re made from soldiers who have already proved themselves as heroes. They’re not robbed from their beds at age six and transformed into superhumans with little connection to the worlds they’re charged with protecting. They’re absolutely human. As I mention in another part of the book, the SPARTAN-II program created modern Titans, as in Greek myths. The SPARTAN-III program gave us modern versions of Greek gods. The SPARTAN-IV program produced demigods, people who have their feet in both Earth and Olympus and are maybe more heroic for the blend.

GRIM: Did you have a character other than Buck that you were particularly excited to write about?

MATT: Veronica Dare was great fun to write. She is Buck’s equal in many ways, and tougher than him in others. I’d love to see more of her and explore what she’s doing with ONI while Buck’s off saving humanity with the Spartans. Other than Buck, though, Romeo had a lot of the best lines. He’s such a jackass, but he’s an honest jackass.

GRIM: How would you say Buck has changed since his transition to the SPARTAN-IV program?

MATT: That’s really the point of the book, isn’t it? In addition to being faster, tougher, and stronger, he’s become older, wiser, and – most importantly – humbler. During the Covenant War, it was easy to know what you were fighting for and how to feel good about it. It’s a lot harder in the post-war galaxy, but I trust people like Buck to sort it out and get through it.

Many thanks to Matt for being so kind as to give us a peek behind the curtain. Hopefully you all enjoyed it as well! This might be a cool thing to make a habit of… 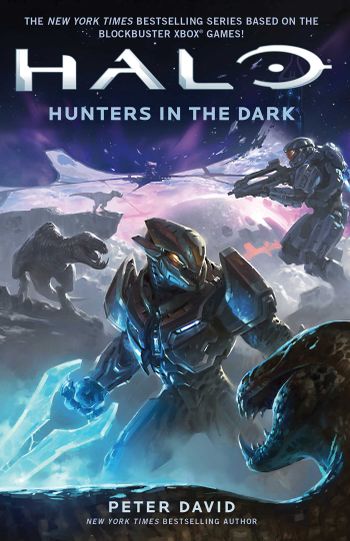 A couple of weeks ago we revealed our 2015 print publishing lineup with Simon & Schuster, which included a small taste of the cover art from one of the announced titles, Halo: Hunters in the Dark. This week, the novel’s description was revealed, as well as its fully realized tyranno-lore-us rex cover art by the ridiculously talented Kory Hubbell. So in case you hadn’t seen either yet, here you are! (click the image to the right to make your current desktop weak in the knees)

“It is 2555, more than two years after the Master Chief went missing-in-action following a decisive conflict on Installation 00 - the massive, extragalactic Forerunner construct known as the Ark - as part of the final chapter in humanity’s bloody thirty-year struggle against the overwhelming forces of the Covenant. Now, as a tenuous peace exists between the humans and the Elites, a startling scientific discovery is made…and the riddle behind its Forerunner origins could very well seal the fate of the entire galaxy within a matter of weeks. In order to unravel these dangerous secrets, a heroic, hastily formed coalition of humans and Elites must attempt to overcome their differences as they embark on a covert mission back to the Ark - an astonishing, enigmatic place beyond comprehension from which few have returned and where mortal danger awaits them all…”

Needless to say, we're looking forward for fans to get their boots down on Installation 00 come this June. We hope you are as eager as we are. 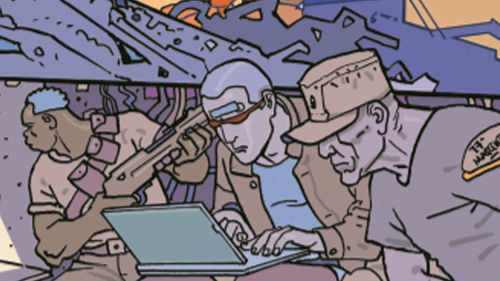 Many of you have seen the curious reports that have popped up from 26th century war journalist and photographer Benjamin Giraud. Giraud is on the hunt for the truth behind the Master Chief; who he is, how he became the hero we know, and how things may have changed since the Covenant War ended. Long-time fans almost immediately made the connection – and accurately so – that Giraud was someone we’ve seen before in the Halo universe. We first saw him at ground zero during the Covenant’s attack on Earth in the Halo Graphic Novel story Second Sunrise Over New Mombasa. What does he know? What does the UNSC know? What does ONI want to keep from us? Needless to say, there are many, many more questions than answers right now, but this is your chance to join the hunt. Make sure you follow Giraud’s journey as it unfolds here, and for a more multisensory experience, be sure to also experience his reports on the Halo Channel. Keep hunting the truth, loremasters. You never know where it might lead you…

A few keen-eyed fans have noticed some pretty neat Instagram-based activity lately. Some pretty awesome artwork and design details have been scattered throughout various Instagram tags for fans to explore, but just in case you haven’t had the chance to peruse it all on your own yet, we thought we’d give you a nice shortcut right to all the good stuff. Below you’ll find direct links into each of the various subject-specific tags that will showcase some really awesome stuff to feast your eyes on. Some of it might look familiar, but other bits… maybe not so much. Check it out!

Next week we’re donning our latest GEN2 Mjolnir and stepping into the ever-precarious frontier of community curiosities. Information on how to offer your query for consideration can be found in our official submission thread here, so let us know what you’re thinking!

Our Universe entries today are a mix of brand new entries as well as updated info for the cast of Halo: New Blood. You’ll also notice that there are spoiler warnings attached to these particular entries because they include details that WILL spoil the events and revelations of Halo: New Blood if you haven’t already picked it up. Consider yourself warned! Also, with such a large canvas to work with regarding the current CF SNAPSHOTS assignment – the Sangheili – we’re going to keep it going for another week. If you want more details on how to contribute, check out the thread here in our Universe forums. And with that, we close for this edition.

Until next week… Live well, play Halo, and if they came to hear me beg, they will be disappointed.

The Spectre is a Covenant infantry support vehicle and was widely employed in the conflicts that took place on Delta Halo.

Home of Earth’s first space elevator, New Mombasa developed into a sprawling metropolis. The city was mostly destroyed by the Covenant during their assault of Earth.

The outer colony of Talitsa is one of twenty-seven natural satellites of a gas giant in the Sverdlovsk System.