Chronique:Canon Fodder - In the Zone

Hello, fiction folks! Thanks for stopping by to spend some weekly eyeball time with us. While E3’s train finally pulled into the station to allow us all a few moments of respite, there is scant time to linger, as the march towards October rolls on and will be filled with scattered nuggets of hypey goodness for fans to sink their eager teeth into. In case you missed it, last week we took a closer look at the newly introduced Armiger constructs, variants of which are seen not just in the recently released Halo: Hunters in the Dark, but also in the campaign and Warzone footage for Halo 5: Guardians, where you seem them more colloquially coined “Soldiers.” This week, we’ll actually take a peek at some of the fictional setting behind the new Warzone mode, giving your minds an idea about how it fits into the overall Halo setting. 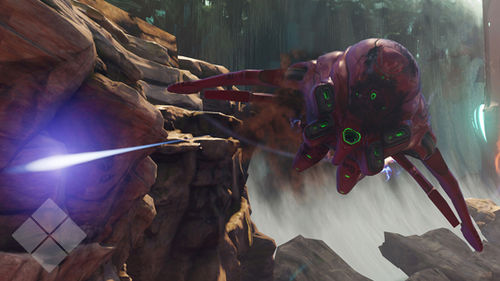 Since E3, Warzone has enjoyed quite a bit of buzz around the Halo community, and while the brand new mode is making an understandably big splash with the multiplayer-centric realms of fandom, the exciting addition to AI-controlled enemies and allies to the fray have piqued the interest of many a story-lover. This week we thought it would be nice to give you another peek into some of the fiction behind some new additions in Halo 5: Guardians, this time focusing on how the Warzone “Bosses” fit into the picture. Here’s some context…

War Games simulation technology has become increasingly sophisticated, with the UNSC leveraging it at all stages of training. Spartans are almost constantly engaged in War Games, familiarizing themselves with new weapons, enemies, and environments to solve the progressively complex and hazardous tactical problems they will face in the field. In effort to more accurately synthesize live fire battlefield conditions, and with new threats constantly emerging, the programmers and training personnel aboard the Infinity have enhanced their simulation scenarios to create Warzone, a combined-arms training program that pits Spartans against a wide range of Covenant and Forerunner enemies, as well as each other.

With Infinity at the tip of the spear, their Warzone designers have access to many of ONI’s internal War Games map datasets and technical intelligence reports, allowing them to pull together data on hundreds of different combat encounters, think-tank exercises, and secret observations to create unique high-threat enemy simulations. These “Boss” constructs can be representative of a singular exceptional opponent, or an amalgamation of multiple combatants created to test particular combat strategies and threat-response loops by UNSC troops. For training purposes, these Bosses are identified by specific colorations within Warzone to indicate their threat level.

An example of one of these bosses is Baron ‘Sraom, based off the exploits and experience of an ace Banshee pilot from the renowned house of ‘Sraom. Trust me when I say, whether of Covenant or Forerunner origin, these boss units will begin to develop their own personalities among Spartans as they are encountered throughout various Warzone scenarios. You’ve only seen the tip of that iceberg. And yes, you’ll notice an slightly adjusted spelling of the aforementioned Baron’s name. We hope you’ll pardon the E3 vowel movement. 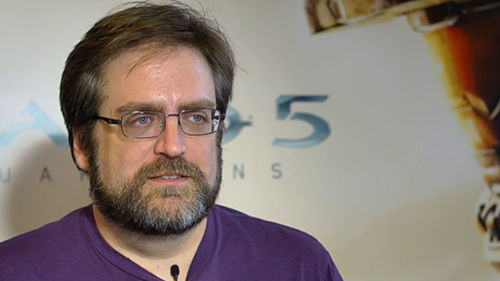 In case you missed it, a couple of 343 story stalwarts chatted with the fine folks at Game Informer about the story of Halo 5: Guardians, and how the campaign fits in to the overarching narrative. Definitely check it out, as Frank O’Connor and Brian Reed also help give a bit of insight into the “state of the universe” that most story fans will find helpful and enjoyable. Give it a watch!

Q: In Halo 2, Rtas says that the Arbiter's armour is quite old, hence the invisibility won't last as long as the newer ones worn by fellow Elites accompanying him. Yet, at the end of Halo Wars, the then Arbiter dies in the shield world, which eventually explodes. Hence the armour provided by the prophets in Halo 2 shouldn't be older than 20 years. Could you explain?

A: The armors held in the Mausoleum of the Arbiters are all ancient and storied. The loss of Ripa ‘Moramee’s armor was mourned, but it’s important to remember that the armor adorning the various Arbiters is not a single set passed on from one individual to another.

Q: Are the marines featured in the Warzone gametype real humans learning how to fight alongside superior soldier (Spartans) or are they AI simulations just like the Covenant/Prometheans?

A: The UNSC Marines that assist the Spartan fireteams in the Warzone scenarios are AI-driven components of the simulation, and are not live participants of the training, both practically and fictionally. 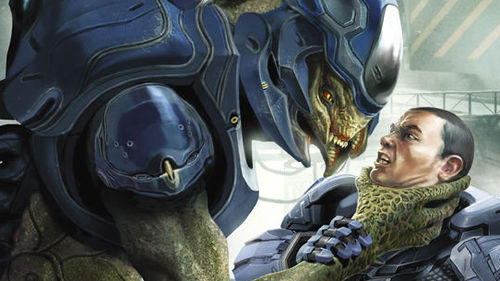 For those of you itching for a fiction fix, look no further than Halo: Escalation, as Issue 19 is out right now!

An unexpected ally joins a team of Spartans for a dangerous operation—a secret mission into a hidden Forerunner world where the mysterious site known as the Absolute Record awaits! The thrilling sequel to Halo® 4’s Spartan Ops continues from Duffy Boudreau (BlackAcre) and Ian Richardson (Noble Causes).

You definitely won’t want to miss this arc, as it should ease the wait for Halo 5: Guardians, as well as make the story all the sweeter once it lands this October.

Next week we’ll be debuting a new little section called Canon Fodder: ChatterNet. How does it work? Glad you asked! Normally, we're the ones culling through all your questions (and boy do you folks like asking questions!), and trying to give you answers where we can. Well this time, the tables are turned! Occasionally, you'll see a thread pop up in the Universe forums where we'll ask a question of the community, and then pull a few different answers for inclusion in an upcoming Canon Fodder.

Your question for next week's Canon Fodder:

What are your favorite Spartan armor designs, and why?

More details can be found at this week’s official thread. Hop in and tell us what armor you love donning in the Haloverse!

That brings us to a close this week, friends. Thanks for all the excitement you continue to share across the web, we’re equally as excited to play Halo 5: Guardians with you all this fall. Have a great weekend, and don’t forget to check out the next big round in the Halo Championship Series this weekend at HCS Indianapolis presented by PGL. You can catch all of the “professional War Games” action on the Halo Channel or Twitch from June 26-28.

Until next week… Live well, play Halo, and never serve Palmer with a scrambled egghead.

The Fuel Rod Cannon is a shoulder-fired heavy weapon that launches extremely volatile explosive projectiles that detonate on impact.

The Gravity Hammer is a powerful, close-range melee weapon hailing from the totemistic traditions of the Jiralhanae.