How goes, Halo fans? This week has been a busy one at the studio as we tackled Toy Fair 2016, and are preparing for the impending arrival of Halo 5: Guardians’ next content update, Hammer Storm. Speaking of which, after reading Bravo’s excellent preview last week, more than a few of you inquired about when we might talk a bit about the lore behind some of Hammer Storm’s upcoming aspects like maps and armor. Fortunately, that particular question has a relatively easy answer: Today. So while last week we chatted about some fun fiction that certainly sits on the outskirts of canonical relevance, this week we’ll be moving the needle back much closer to the storytelling sweet spot. Let’s dive in! 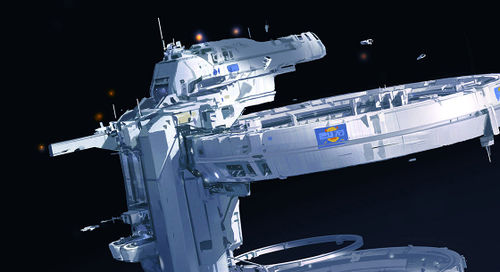 Commissioned by Lethbridge Industrial in 2555, Auriga Station served as one of the company’s preeminent research and development facilities. Its staff of human and AI researchers were kept busy decrypting Covenant and Forerunner records, searching for naval depots and resource caches. Fitted with the latest in UNSC fabrication systems and Sangheili-procured forges, the station could also carefully disassemble, analyze, and rebuild nearly any piece of recovered technology to aid in reverse-engineering efforts. It was this latter capability that brought Auriga Station to the attention of Cortana and her Created. Stripping bare Lethbridge’s vast archives of secrets and making a mockery of their counter-cyberintrusion suites, Cortana quickly repurposed the loyalties of the station’s resident AI and removed the human crew. Beating hearts have now been replaced by the inflamed obsessions of caretakers eager to use the station’s tools to harvest, decompile, and rebuild new tools and weapons to be wielded by constructs advancing Cortana’s plans across her growing ecumene. Meanwhile, an audacious plan has been hatched to deny the Created their prize: board Auriga Station with Spartan operatives, disable or steal the manufacturing systems on board, and wipe the AIs still bound to its holographic storage systems. In order to train for the assault a perfect recreation of a critical area on Auriga’s habitat ring has been constructed in War Games, codenamed “Torque.” 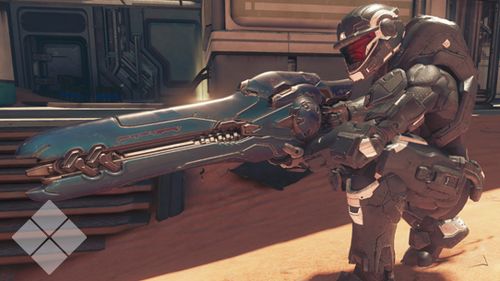 Armor: The DECIMATOR is Materials Group's attempt to reengineer key improvements of the Mjolnir Mark VII prototypes. The most successful of these efforts is the suit's protean energy shield, which can be partially reshaped and sculpted.

Helmet: DECIMATOR helmets have a design lineage that stretches back to the final years of the Covenant War, though few Spartan or UNICOM commanders are privy to the full details. 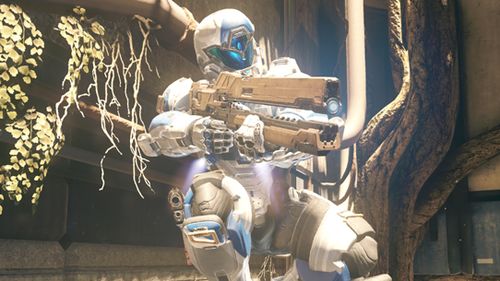 Armor: A rarity in an age of highly-specialized Mjolnir variants, MARAUDER is a general-purpose powered assault armor that takes full advantage of line-replaceable modules and reprogrammable sensor arrays for maximum flexibility.

Helmet: The MARAUDER VISR is built around the concept of hot-loadable tactical software modules optimized for particular situations. Modules are selected either by the onboard battle management system or the user. 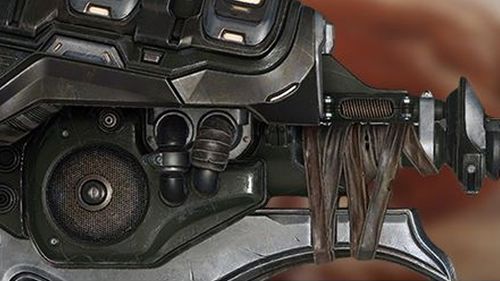 The Jiralhanae gravity hammer is a brutally effective melee weapon that combines a bladed war hammer with repurposed gravitic impellers integrated onto the striking face. These impellers give the weapon its namesake, and each smash produces a devastating area-of-effect pulse that leaves battered opponents in its wake. Over the course of the Covenant War and its aftermath, a variety of gravity hammer styles were encountered by UNSC forces and unfortunate civilians, sporting performance upgrades and stylistic tweaks to give their power-hungry owners a unique and lasting impression on the battlefield – oftentimes in a very literal sense. 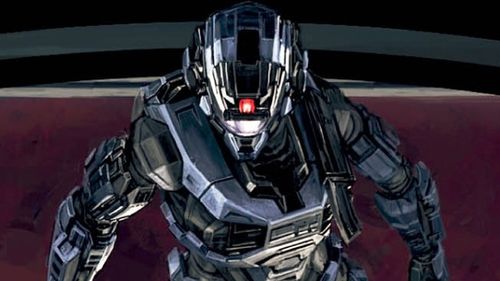 A: As of 2558, Spartan-II Naomi-010 is still enlisted and serving, however, the details of her current deployment remain classified.

When we meet again next week, you might want to come prepared for a fight, as we’ll be featuring a focus on fictional fisticuffs. Potentially related, it might be a good time to check out the North American Regional Finals of the Halo World Championship this weekend to watch some pretty elite players take the stage. Plus, our next Halo LiveStream is currently scheduled for next week, where we’ll be once again showing off some pretty cool stuff and having a great time along the way. Would always love for you to join us! And before we go, I want to personally wish my dad (Grim Prime) a very happy birthday today. Here's to a true Forerunner!

Until next time… Live well, play Halo, and share the rock!