Greetings, story-seekers! Welcome back to another lovingly crafted edition of your favorite fiction feature. If you missed us last week, you can easily make amends by clicking here to learn new details on the upcoming Halo: Tales from Slipspace graphic novel anthology, as well as get your first glimpse of the fiction surrounding a few of the (quite literally) fast-approaching items in the Hog Wild REQ Drop for Halo 5: Guardians. This week, we’ve got even more Hog Wild lore-lovin’ on tap, as well as a virtual sit-down with a new name in the Halo story stable, John Jackson Miller. Intrigued? Then by all means, read on, friends! 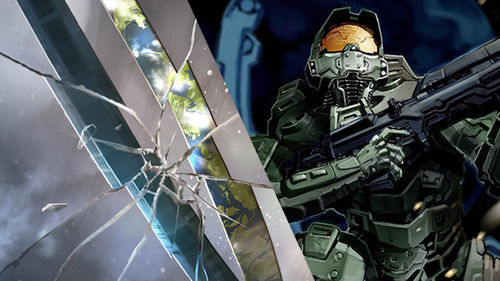 Over the past couple of issues, we’ve shed some light on a couple of exciting new story sources for Halo fans coming up later this year – Halo: Fractures, a new short-story anthology, and Halo: Tales from Slipspace, the aforementioned graphic novel collection. Both books include some particularly intriguing new names within the Halo writers realm, and over the next few months we thought it might be fun to get to know a few of them a bit better in order to whet community appetites. Keen-eyed Canon Fodder followers might likely have noticed why Mr. John Jackson Miller made a logical first choice to start off these familiarization exercises, as he’s written stories for both upcoming products. Using the power of the internet, I sat down with the tri-monickered man to get an idea about where he’s been, and what makes him excited about leaving his own mark on the Halo universe.

GRIM: So, you may be new to Halo, but definitely not to science fiction. Rumor has it that you’ve written some words for at least a few, you know, relatively obscure sci-fi franchises. Something about “boldly going” and this thing called “the Force,” whatever that means. Tell us about some of your sci-fi street cred!

John Jackson Miller: I’m a comics fan, science fiction fan, and gamer — both electronic and tabletop — from way back. I got my break into the business editing magazines like Comics Buyer’s Guide and Scrye: The Guide to Collectible Card Games — which led to my moving to the other side of the camera, so to speak. In comics, I wrote Iron Man for Marvel, which led to my writing for Star Wars; I’ve written more than 75 Star Wars comics, including the entire Knights of the Old Republic series, which is now available digitally and in collections again from Marvel. I was able to work not just on the Star Wars comics, but also games — writing for the Star Wars Roleplaying Game — and then, finally, novels. My Kenobi novel led to my writing Star Wars: A New Dawn, the first novel in the Lucasfilm Story Group era of storytelling.

Along the way I cowrote the first three Mass Effect graphic novels, Redemption, Evolution, and Invasion — and also wrote comics and prose for other franchises including Conan, Simpsons, and Planet of the Apes. Somewhere in there I had time to write Overdraft: The Orion Offensive, a fun science fiction book in my own universe which I think should have some appeal to Halo fans.

Finally, yes, I have spent much of the last year in the Beta Quadrant writing Star Trek novels. My first Trek novel, Takedown, came out last year, and led to my doing my major project for the fall – Star Trek: Prey, a trilogy of novels releasing in consecutive months: September, October, and November, telling of a crisis that involves the Federation and the Klingon Empire and which spans both the Original Series and Next Generation eras. So I’ve got a lot of frequent-flier light years!

GRIM: Okay okay, so I guess you seem to know your way around the genre – also, you’re killing me with the sudden inflation of my sci-fi reading back-log. Now that we know a bit more about what other universes you’ve played in, let’s talk closer to home. What particular aspects of the Halo universe have drawn you in or excited you personally, and are there any aspects that you feel set it apart from other sci-fi franchises that you’ve worked in?

JJM: I’m impressed with the depth of the universe — how much has clearly been thought through — as well as a lot of the places it’s gone thematically. There’s enough that’s familiar to give the newcomer a place to jump on board — but then you’re pretty quickly immersed in a very different world, with a detailed history behind it.

We actually got the Halo Xbox One bundle at my house last year, and my kids think it’s cool that I’m writing in the universe. They’re much better players than I am!

GRIM: Hey, if it makes you feel any better, they’re probably much better than I am as well. You spoke of the preexisting “depth of the universe” in Halo – much of which is actually found in novels and comics; what is your favorite published Halo story you’ve experienced so far? And no counting your own!

JJM: Greg Bear’s Forerunner Saga was a lot of fun. I had the experience of writing the Lost Tribe of the Sith stories for Star Wars so I know what it’s like to set tales in the distant past, long before the time we’re most familiar with. It’s always interesting to get into the mindset of an alien species, and I think he did a great job.

GRIM: I think you’d probably find a lot of Halo story fans – myself included – agreeing with you there. Now as those fans have recently found out with the announcements of Halo: Fractures and Halo: Tales from Slipspace, you’ve found yourself in a unique creative double-dipping, having penned stories for both anthologies. How does the process differ for you when approaching writing a story for a comic/graphic novel/visual format vs a more “traditional” novel-style narrative?

JJM: I did my first “double-dip” at Dark Horse as well, when I simultaneously developed the Star Wars: Knight Errant comics series and the novel by the same name for Del Rey; I later did something similar with Lost Tribe of the Sith. Since I’d been working for Dark Horse for many years and also writing Star Trek for Simon & Schuster, it had been long discussed that I would be part of both anthologies; I’m glad my schedule worked out and that it finally came to pass.

I’ve written lots about the difference between comics and prose, but clearly the biggest is that in comics, we’ve got very talented people doing the artwork, so I’m much more in the role of a screenwriter. In prose, I’m also the cinematographer and art director and set designer and makeup artist — it’s up to me to paint the picture entirely with words. On the other hand, prose offers the advantage of letting you get into characters’ heads and “think” more about issues than you might be able to do in comics, where things like thought balloons and narrator captions have pretty much gone away in recent decades. You can dig a lot deeper into ideas that aren’t necessarily visual.

GRIM: Certainly a very interesting perspective! Speaking of those stories, we’re not giving away any specifics just yet, but what can fans expect from the tales you spun in the Halo universe? Any overarching themes that might tease fans’ tastebuds?

JJM: Whenever I step into a new universe, I tend to go toward stories that are laser-focused on a narrow set of characters and concerns; I did that with both Star Wars and Star Trek when I was getting started. This way I can do a deep dive into the lives and thinking of the characters. I also like the notion of showing what the line officers of the various factions are thinking — I always like imagining what it’s like living in these worlds if you’re one of the masses.

The two stories are both different and similar. Different in that they’re set in two different timeframes and involving different species; similar in that they both deal with questions of isolation and duty from the warrior’s point of view. I really like that the setting is so developed that it allows for something like that. There are a lot of options for the storyteller.

GRIM: Sounds awesome. I know I’m personally excited for fans to get the hands on the stories you’ve told, and am stoked to have you contributing to the universe. Any final words? Where can fans keep up with you and your universe-hopping exploits online?

JJM: Just that I’m happy to have joined the fun. Folks can follow me on Twitter at @jjmfaraway — and can read more about my other works at my website, farwaypress.com.

GRIM: Sounds great. Thanks so much for joining us today!

In halothis week’s Community Update, we announced that the Hog Wild REQ Drop will be sliding into your Halo 5: Guardians experience on May 31. Last week we tackled the fiction for the upcoming STINGER Mjolnir variant, as well as the ridiculously cool new Sword Hog. This week, we thought we’d provide some creative context to a few more items arriving in the new REQ Drop. Let’s see what we’ve got!

UNSC expeditionary forces allied with the Arbiter conduct joint patrols to monitor and defend the Sanghelios badlands from Covenant remnants and Created scouts. Named after a particularly deadly pseudo-arachnid that often lairs in the ancient temple complexes used as staging areas, the Vespin Warthog can deal a deadly defensive sting against any local predator, living or construct. The Vespin M-12 is an improved Warthog with high-acceleration rockets and faster reload time. 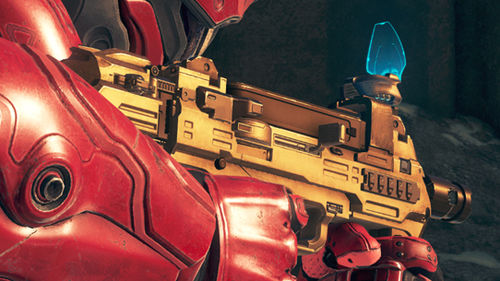 The Covenant have been using smart-link aiming systems for millennia, refining the technology and interlink protocols to near perfection. Though Sangheili display a predilection to iterating on existing designs, some artisans have become fascinated with the possibilities of combining technology refined over centuries in the Covenant with human industrial methods and robotic assembly lines. Among these efforts is a novel reimplementation of the millennia-old Covenant holoscope design pattern used in the Carbine.

In this week’s Community Update, we pulled the curtain back a bit on upcoming Halo 5: Guardians content. In it, a curious message can be found that lore-lovers might want to check out. For the Fodder faithful who tirelessly scour both blogs for every shred of knowledge, we offer an extended bit of inspiring insight. Then again, maybe we’ve just been breathing the wrong gas…

The horizon is a roiling gyre of smoke and steam. Sizzling plasma arcs across the low clouds, illuminating a twisted nightmare of scorched wreckage strewn across the frozen ground. Seeking shelter, an Unggoy foreman flees from his post, amidst the cackling chatter of a hundred thousand Unggoy hard at work.

Yes, the factories of Balaho are active again!

Following their alliance with Cortana and the Created, the Unggoy were granted nearly limitless resources. Ships empty of life but loaded with advanced technology arrived. New agricultural support stations appeared in orbit, awaiting eager workers to feed the desperate masses below. Where chaos had once reigned, stability and a semblance of order have returned. And something more: a purpose.

With their pressing requirements – food, shelter, medicine – met, Balaho’s finest designers and crafters have worked day and night, tirelessly building their future. From their factories come clever mechanisms and curious cudgels, manufactured with knowledge the Unggoy secretly learned over centuries of oppression and cruelty. The destiny of the Unggoy is unfolding, and this time, THEY will be the elite! Well, maybe.

And with that, we take our leave of you for now. The next month is going to bring some pretty exciting times for Halo fans, and we hope you’ll join us every step of the way for all the awesome.

Until next time… Live well, play Halo, and remember: we suck as one, we fight as one!

Gek ‘Lhar joined Jul ‘Mdama following the aftermath of the Great Schism. His experience as a ruthless commander helped reform the Covenant.