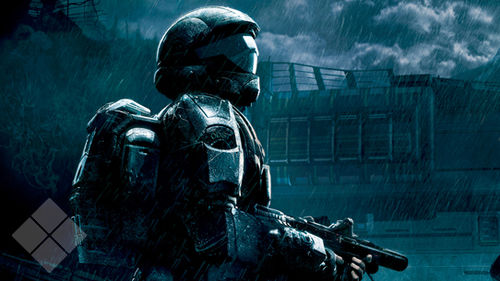 Greetings! It’s a hot-dropping holiday around these parts as Halo 3: ODST is now available as part of Halo: The Master Chief Collection. It’s particularly cool for me as I remember extremely vividly waiting in line back in 2009 with GrimBrothers III & IV (the latter of which is the biggest helljumper fan I know), eager to get our hands on a brand new type of Halo experience. The Halo 3: ODST campaign is a particularly special experience for Halo fans – especially story lovers – as the game primarily is centered around its campaign, which in and of itself was a new experiment in the way that a Halo game story was told. Rather than being a completely linear “level-to-level” romp, the Halo 3: ODST campaign featured a bit more of a modular approach, with players getting to experience much of New Mombasa in a hub-style fashion, unlocking new areas to explore as they chose new missions to undertake. Even the order in which many of the missions were tackled was left largely up to the player. Another interesting aspect of the campaign was that the player got to take on the role of multiple different characters, depending on the mission chosen.

From a character standpoint, Halo 3: ODST was a veritable highlight reel of roles to both play as and alongside. Headlining the crew was Gunnery Sergeant Edward Buck (Nathan Fillion), who led his squad – Alpha Nine – into the heart of a Covenant-held New Mombasa at the behest of the Office of Naval Intelligence and Captain Veronica Dare (Trisha Helfer). Under Buck’s command was Dutch (Adam Baldwin), Mickey (Alan Tudyk), Romeo (Nolan North), and the primary player-character, a still-green ODST known lovingly as “the Rookie.”

What begins as already a less-than-routine engagement for the team as they drop in from the UNSC Say My Name, goes even further awry as the Prophet of Regret suddenly decides that making a slipspace jump in-atmosphere is a good idea (spoilers: it’s a bad idea). While the Master Chief, Sgt. Johnson, Commander Miranda Keyes, and the rest of the crew of the UNSC In Amber Clad goes chasing after Regret, the ODSTs of Alpha-Nine as thrown off course and scattered across the streets of New Mombasa; streets that become more dangerous with each passing moment thanks to the increasing occupation of the Prophet of Truth’s Jiralhanae-led forces. Unrelated, “Chasing after Regret” sounds like a good name for a post-hardcore side project band. Anyway, it’s on these harrowing and dimly lit streets of new Mombasa that you begin your adventure as the Rookie, who now must try and piece together what has happened in the six hours since their pods came crashing down to Earth. Throughout the campaign, fans take the role of multiple characters as they try to not only survive, but recover a vital intelligence asset along the way. Just in case you’ve never been able to experience the campaign of Halo 3: ODST before, I’ll leave things at that. Needless to say, fans both old and new are in for a treat as they plow through the beloved campaign with a crisp new clarity.

If I can leave you with any last advice, in the wise words of the great 26th century philosophizer Avery Johnson: “Bip. Bap. Bam.”

Recently, 343 Industries’ Senior Game Designer Max Szlagor sat down for a behind-the-scenes walkthrough of Halo 3: ODST with Halo legend Joe Staten. As the Writer & Creative Director on Halo 3: ODST, Staten is able to provide fans with an inside scoop on some of the creative and development process that went into crafting the beloved helljumper-highlighting experience. It’s a peek behind the curtain that Halo fans won’t want to miss, and you can check it out right here.

And speaking of Joe Staten, don't forget that he is working on an all-new addition to the Halo fiction, Halo: Shadow of Intent, which is due out later this year!

One of my favorite “Halo 101” videos from the OG Halo Waypoint days was always “Ten Twenty,” as in “October 20th.” Well-versed lore fans will know that date very well, as it was an incredibly important turning point in humanity’s war with the Covenant. Focusing on the arrival – and subsequent sudden departure – of the Prophet of Regret’s fleet during the Battle for Earth in 2552, the video gives an overview of the events that are taking place and how they connect threads from Halo 2, Halo 3, and Halo 3: ODST. Seeing as how we were getting ready for the latter to hot-drop into Halo: The Master Chief Collection, I thought it might be good to resurface the video back onto the Halo Channel in our Learn category. However, we also realized that we had some shiny new assets to play around with, so I turned things over to one of the Halo Channel’s awesome producers, Jesse Stipek, who you might remember from our chat in Issue 19. In what seemed like no time at all, Mr. Stipek hand-delivered back to me a new version of the “Ten Twenty” video, but with some much shinier polish.

In addition, you’ll find a couple other cool trips down ODST memory lane now available on the Halo Channel. Definitely go and check them all out!

Your next SNAPSHOTS assignment should come as no surprise, as we’re asking you to drop feet first into battle to capture your favorite helljumping heroes in all their glory. The ODST are able to sport a variety of specialized gear loadouts and fatigue variants, depending on the specific squad and nature of their mission objective, and we’ll be looking to include examples of each soon in a media gallery for the ODST Universe entry. Fans looking to grab screenshots should focus on Halo 2: Anniversary, Halo 3, and (obviously) Halo 3: ODST within Halo: The Master Chief Collection. Also, images from Halo: Reach linked to your fileshares could also be useful (gotta give some Bullfrog love!), as well as ODST-based Mjolnir variants found in Halo 3, Halo: Reach, and Halo 4. Info can be found in here in our SNAPSHOTS Master Thread.

In regards to media galleries and community-sourced screenshots in general, we’ll be looking to start implementing some of your selected shots into Universe entry galleries once the craziness of E3 has “subsided.” Stay tuned and keep snapping!

And with that, we’ll close for now. Enjoy your return to New Mombasa, and remember to take a moment to enjoy the lovely new vistas of Halo 2: Anniversary’s Remnant map this week! If you want a bunch more info on some of the details surround the new update that ushers in all the latest goodies, look no further than this post by Bravo!

Until next week… Live well, play Halo, and Keep it Clean.

Biofoam is an analgesic and antiseptic foaming polymer compound used by soldiers and medics to seal and disinfect deep wounds. It is a standard component of all UNSC first-aid kits.

Mars is a hub for industry and home to critical UNSC facilities.

The drop pod is a means of troop deployment from very high altitudes or, in most cases, from space. This equipment is most frequently employed by Orbital Drop Shock Troopers (ODST).

VISR is a data management suite used by ODST and Spartan super-soldiers to enhance their situational awareness on the battlefield.