Chronique:Canon Fodder - A Time to Give Tanks 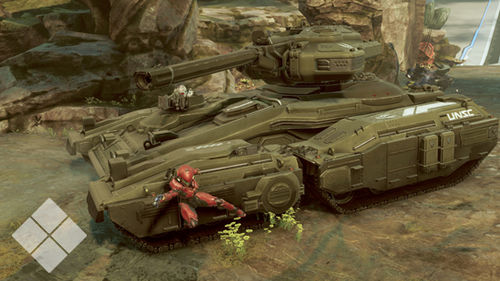 Greetings! You all just keep showing back up every week, don’t you? Welp, if you’re gonna stick around, we might as well take a look at some story-related Halo goodness together! Last week, we took a closer look at some of the alien vehicles you might see employed by Swords of Sanghelios and Covenant forces in Halo 5: Guardians. This week, we thought it would only be fair to give humanity’s eager engineers the same attention. Plus, we’ll check out our brand new trailer for the upcoming Halo: The Fall of Reach animated series.

Before we get started, I'd like to take a moment to celebrate Halo 5: Guardians recently going gold. It's been a herculian effort by the entire team at the studio, and we're absolutely thrilled to be so tantilizingly close to being about to share the experience with all of you. And with that out of the way, let’s get to the task at hand!

So as we mentioned, this week we’ll grab a peek at some of what the UNSC has been up to while trying to keep their equipment updated and up to the task at hand. But differently from last week, we thought it would be fun to do so by showcasing some of the awesome variants players can acquire through Halo 5: Guardians’ new Requisitions system. The REQ system not only allows for players to call in awesome ordnance to change the tide of battle in the all-new Warzone multiplayer mode, it also allows fiction-focused fans a glimpse into potential mission-specific variants or skunkworks prototypes being tested out in the Warzone scenarios. After all, Spartans aren’t the only ones getting put through their paces. So let’s take a look at some particularly cool new updates and variants to some of your old favorites. Perhaps some of them will make it on to your REQ wish list come October 27th! 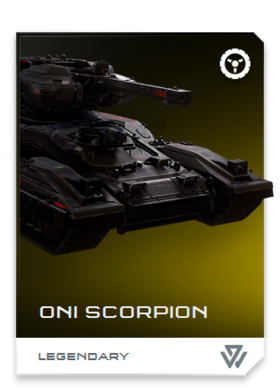 The new iteration – the M820 – of the storied Scorpion is half the mass of the old M808 yet has nearly identical firepower and armor protection. As expected, ONI spares no expense with its "security" Scorpions, outfitting them with experimental ammunition using the latest energetic propellants. Advanced Scorpion with heavy armor and upgraded cannon. 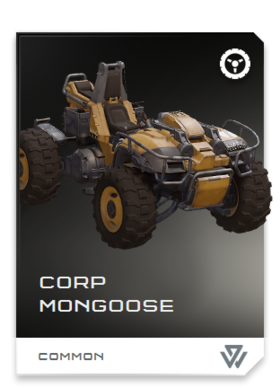 Lovingly dubbed the “mothergoose” by frontline infantry men and women due to its increased size over the M274, this particular variant shown is Liang Dortmund's heavy-duty modification of the standard M290 ATV. The result is a nimble but rugged Mongoose with extra armor. 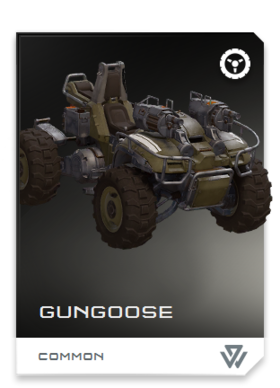 The new “Gungoose” is the result of an M290 Mongoose quad bike fitted with twin grenade launchers. A passenger can be accommodated on the rear-facing seat, providing ample offense on this snake-killer’s nose and tail.

Rocket Warthogs are often the first and last line of defense against Covenant aircraft for UNSC ground forces. This particular variant showcases an improved Rocket Warthog with upgraded armor. 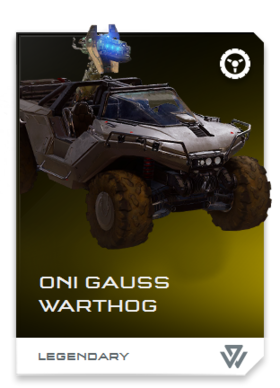 Tested in classified ops during the Requiem campaign, the UNSC has fitted a brand new evolution of the heavy gauss cannon on the M12B Warthog. For this particular ONI-spec variant, gauss cannon impacts produce lingering area of effect damage. The precise mechanism remains highly classified. Calling one of these bad boys in gives your team an advanced Gauss Warthog with heavy armor and upgraded gauss cannon. 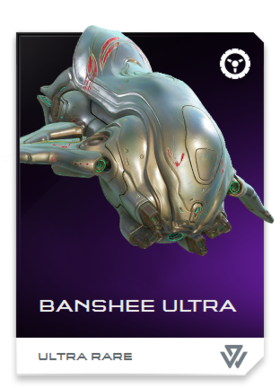 Only skilled Sangheili aces are entrusted with these rare and valuable aircraft, with means that each one is carefully husbanded for decisive strikes. Superior T-54 Banshee with heavy armor and significantly upgraded armament.

As many of you have probably already seen, the new launch trailer for the Halo: The Fall of Reach animated series dropped very recently. If you haven’t already seen it, have no fear; click here to view it now and all will be forgiven. If you have already seen it… well, I mean you might as well also click here, just to be sure. If you’re a fan of the related novel and comic series like so many of us are, you’re likely to experience hard-to-explain happy feelings when seeing some long-held-dear events brought to life in a brand new way by our friends and partners at SEQUENCE. 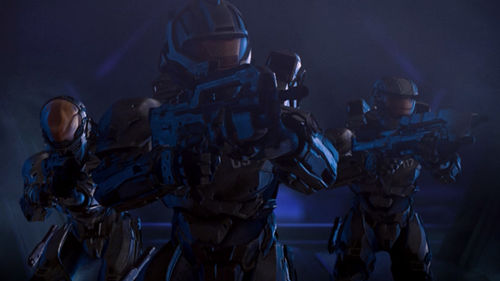 As many of have noticed, our beloved Spartan-IIs of Blue Team are sporting the classic Mk.IV Mjolnir base armor, while testing developmental helmet permutations which incorporate iconic visual cues that our heroes eventually become quite fond of. Visually, it creates a direct lineage to their eventual state-of-the-art GEN2 kits donned decades later, while blending almost seamlessly with classic aesthetics. On a more practical level, it’s a fantastic way to give newcomers to the Halo universe a way to more easily identify and connect Blue Team’s past with their appearance in Halo 5: Guardians. We’re certainly excited for you to get proper eyes-on with the upcoming animated series when it launches alongside Halo 5: Guardians, and if you haven’t already checked it out, back in Issue 32 of Canon Fodder we featured a great Q&A about the Halo: The Fall of Reach animated series with 343 Industries’ own Frank O’Connor and Kiki Wolfkill. Go and give it a look!

And with that, we close for another spell. If you haven’t already checked out Episode 03 of Hunt the Truth, in the world are you waiting for?! To say that things have gotten tense would be a ridiculous understatement, that’s for sure. Make sure you check it out; if nothing else, it will help ease the fast-dwindling time until you’ll all be strapping on your Mjolnir boots and hunting truths of your own. Less than three weeks to go!

Until next week… Live well, play Halo, and don’t fall off the leaderboards of Unggoy Farmer.

Senior Chief Petty Officer Mendez was the head instructor for both the SPARTAN-II and SPARTAN-III programs.

Colonel Robert Watts defected from the UNSC and came to lead the United Rebel Front, a powerful alliance of insurrection groups.

Blue Team’s original second-in-command, Samuel-034 was a close friend to John-117 and was the first Spartan-II to be killed during the Covenant War.