Greetings, you wonderful humans. Last week, we dove a bit deeper into the extended lore of the Fury Storm Rifle, as well as give a quick update on the print release of the Matt Forbeck-penned Halo: New Blood, which launches this March 15th. This week, we’ll be talking about some awesome upcoming ship-stuff from our friends at Spartan Games, as well as introducing a brand new project that keen-eyed fans might have gotten a glimpse of recently.

A few days ago, a new Halo product from the fine folks at Dark Horse Comics surfaced, piquing the interest of eager-eyed lore-lovers across a number of community haunts, who quickly went zero-to-gravemind trying to use their compound intelligence to decipher its true nature. Well, we’re here to help clear things up a bit, and give you some early details to sate certain curiosities, and set speculatory fire to others. With that in mind, read on! 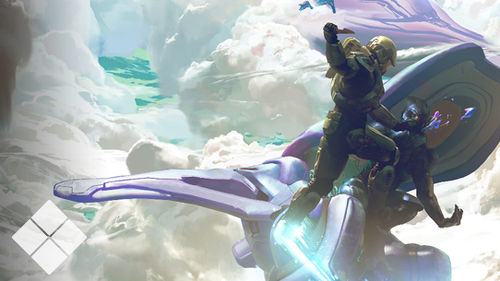 While we aren’t talking about specific story content today, we’re confident that lore fans will be excited by the breadth of tales we’ll be telling. From subject matter to stylization, Halo: Tales from Slipspace will take fans on a diverse and delightful jaunt across the Halo universe, and is penciled in to be in your fabulous fan-hands on October 12, 2016. Again, we’ll be diving into more specifics about this project in the near future right here within these humble pages - including a deeper dive on specific stories and a proper cover reveal - so stay tuned!

…and straight on ‘til morning[modifier] 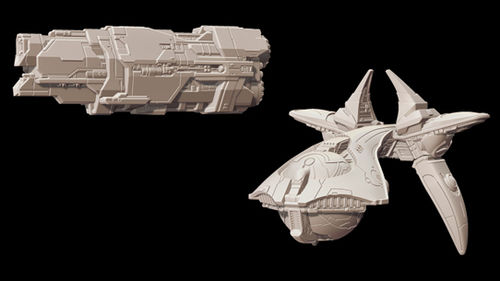 Our partners at Spartan Games will soon be unleashing new battle-tested vessels to bolster your Halo: Fleet Battles experience, headlined by the addition of the Covenant CPV-class heavy destroyer – most recognizably visualized in Halo Wars – and the Valiant-class super-heavy cruiser, which lore fans will recognize as being the foundation for Admiral Preston J Cole’s flagship, the UNSC Everest. These new additions are slated to release on March 18th, but we wanted to give fiction fans a sneak advanced peek at the extended lore for each of the entries. In addition, we wanted to surface the extended lore for both the CAS-class assault carrier and Punic-class supercarrier – both of which are already available, but haven’t had their included extended fiction surfaced very widely. Also, keep an eye out for even more Spartan Games news and info coming in the near future; it’ll certainly be grounds for tabletop-adoring excitement – in our opinion at least. But enough of that, let’s get our heads back in the clouds and take a closer look at some valiant vessels… 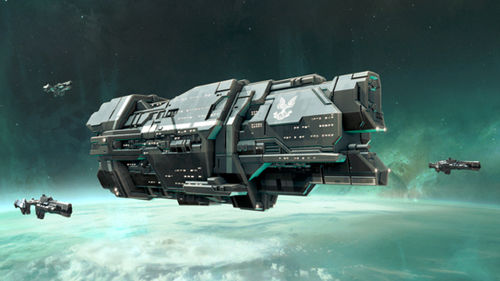 First drafted as a compromise between a battleship and heavy cruiser, the Valiant-class suffered through years of feasibility studies and redesigns before the first hull was released from the Martian shipyard docking clamps in 2493. The Valiant showed promise during initial testing and evaluation, but cost overruns and delays in incorporating next-generation fusion drives seemingly doomed the class. Less than two years after entering service the Valiant was stricken from the UNSC Navy rolls and partially scrapped. The ship would have been a mere footnote in Navy history were it not for the expansion of Navy prestige and responsibilities following revelations of Colonial Military Authority (CMA) infiltration by Insurrection sympathizers in 2497. Almost overnight the Navy was faced with a lack of command-and-control vessels, with ships traditionally assigned to such tasks quickly tied up in lengthy counterinsurgency operations. The Valiant-class had the tonnage and firepower to augment battle groups composed of smaller vessels on patrols, as well as the space to install flag bridge facilities demanded by admirals leading the expeditionary operations.

The Valiant and a handful of other super-heavy cruiser spaceframes were converted into command ships; the most famous of these refurbished vessels was the Everest, fated to be the flagship of the legendary Vice Admiral Preston Cole. However, resource and crew shortages during Operation: TREBUCHET and continuing in the Covenant War curtailed plans to give all Valiant-class warships a complete suite of command upgrades. 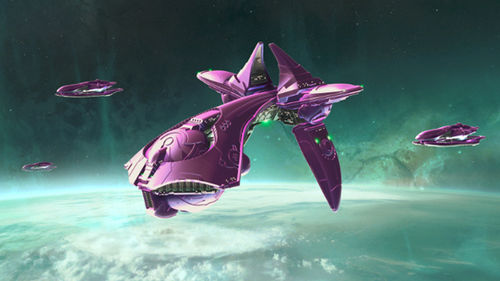 Relentless engines of destruction, the CPV remains one of the most feared warship silhouettes across human space. However, its role within the Covenant military was that of a ship for flagellants, crewed by those deemed unstable or unsuitable for service in the regular Ministry fleets; led by those whose actions did not rise to heresy, but who carried the stench of disloyalty or disobedience. It was CPV crews who were called upon to do the dangerous and rather distasteful orbital bombardment of worlds early in the campaign against humanity, hovering over cities, factories, and farms in order to burn them clean of apostasy in the face of withering fire from surface installations and remaining UNSC defenders in higher orbit. Hundreds of shattered CPV hulls remain on these charred worlds, monuments to crews who found honor only in compliance with suicidal orders, their family names once more added to the rolls of those worthy to continue the march to glorious salvation.

As the war progressed the crews of the CPV’s found a newfound purpose as executioners and heralds, wielding excavation beams with deft hands and claws to carve meaningful sigils into cleansed worlds and leading battle groups against remnant UNSC forces judged unworthy of meeting the fleet’s Supreme Commander. Veteran crews also found a new currency of honor in using their well-practiced skills to assist the artifact hunting fleets that scoured former human worlds for Forerunner relics and war trophies, with many turning quasi-mercenary and offering their services to Ministry leaders eager to one-up each other with treasures and baubles recovered from the glassed ruins. 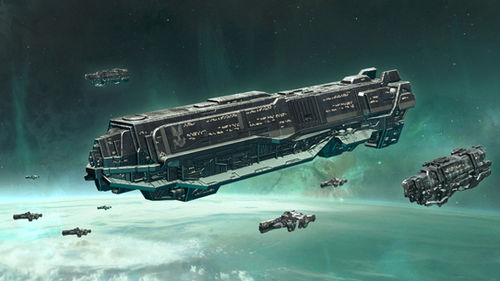 The Punic and its sister ships were the first of a new breed of warships drafted to fight a new style of colonial war in the waning years of the 25th century. Officially designated Space Control Vehicles, these massive carriers could transport and sustain entire Colonial Military Authority (CMA) expeditionary and interdiction campaigns in the remote Outer Colonies for months at a time, crushing dissent and terrorism before it could fester and spread. At least, that was the intent before Covenant fleets threatened humanity with extinction.

Punic-class supercarriers have served the UNSC well in numerous campaigns and holding actions during the Covenant War, including the heroic last stand above Estuary and as the base stations for decisive counterinsurgency and evacuation operations on Charybdis IX. Unfortunately, the destruction of each supercarrier also means an irreplaceable loss of the elite crews and materiel that slowly erodes the UNSC Navy’s overall effectiveness. By 2552 only a handful of Punics’ remain space worthy, including the Trafalgar, pride of Reach’s defense fleet. 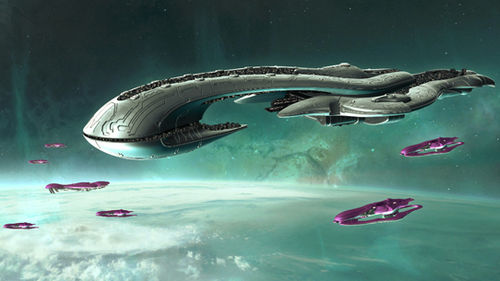 Assault carriers are monumental symbols of Covenant power, and among the deadliest implements wielded by the Prophets in their war against humanity. Each assault carrier is a potent instrument of conversion and compliance, capable of deploying thousands of troops and numerous fighter craft, backed by an array of devastating energy projectors that can burn entire continents to ash. A single CAS is sufficient to quell all but the most pernicious heresy, rebellion, or parasite outbreak. Colossally expensive to construct and few in number, the rare loss of an assault carrier is mourned by the entire Covenant.

Every major Covenant fleet has at least one assault carrier at its heart, if only because carriers themselves require a significant number of support vessels when operating away from High Charity or major outposts. Multiple carriers in a single fleet is unusual, but not unheard of. For example, the crusading Fleet of Sacred Consecration, commanded by the Prophet of Regret himself, is led by twin assault carriers, the Solemn Penance and Day of Jubilation. Together, these massive warships have scoured dozens of human worlds and brought righteous destruction to those within the Covenant who dare stand in the way of the Prophet’s holy mission. 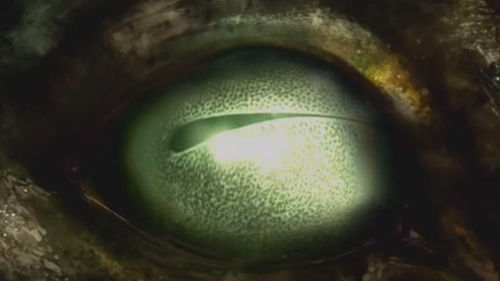 CHeeeezyy: Are there any other kind of sentient beings (as like if they knew how to make tools and stuff) in the Milky Way galaxy?

A: The short answer is yes, the Forerunners indexed and reintroduced many sentient species into the Milky Way galaxy. The longer answer is that only a fraction of these species have gone on to build tools or achieve even Tier 7 (preindustrial) signature technologies in the millennia following the firing of Halo; of those, only a handful have been encountered by humanity in the Orion Arm region of the galaxy. In fact, not even every species that fell under the yoke of the Covenant have been contacted and catalogued by the UNSC, as the Prophets did not deign many worthy of trading service for salvation within their fleets and the Sangheili kept few records of civil affairs.

The Stag Lord: I've always assumed that in the War Games simulation, the Spartans use their own “real-life” armour configurations and that carries over into the simulation. Can somebody explain if this is the case?

A: Put simply, yes, this is nearly always the case. As highly trained and proficient special forces personnel, Spartans have a great deal of freedom to adjust their kit on a mission-by-mission basis, though their commander and specific task parameters can dictate certain loadouts. During War Games simulations, Spartans are encouraged to cross-train with a variety of different Mjolnir variants. That being said, individual Spartans do often have their favorite kit, and from a real-world narrative standpoint characters are portrayed in the same general set of Mjolnir for visual consistency and recognizability.

Well that will do it for this week. Hope you enjoyed our time together today – I’m looking at you, loyal r/HaloStory member, AFlyingMexican5! – next week we’ll be back to explore a bit more of a cauterized colony world. Hope you’ll join us.

Until next time… Live well, play Halo, and don’t keep it loaded.

Threshold is an enormous gas giant in the Soell system. It has an extensive network of Forerunner gas mining and refinery stations and was once orbited by Alpha Halo.