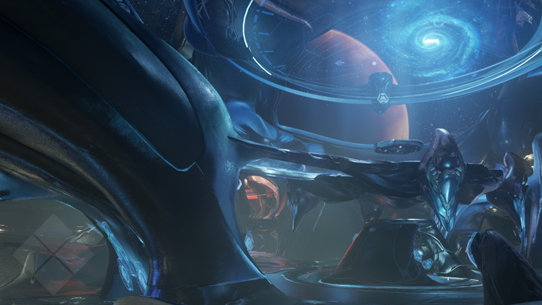 Welcome back! Last week we looked back – way back in fact – into Halo’s past, charting the timeframe in which the Halo Array was fired by the Forerunners in a last-ditch effort to combat the ravenous and seemingly unstoppable Flood. This week, we actually look forward, and take a closer look at some details you might have missed out on between ground pounds and hat trick medals in the Halo 5: Guardians Multiplayer Beta. Personally, one of my favorite aspects of a new Halo game’s multiplayer component has always been exploring the new maps and playspaces. However, I was usually far less interested in where the rockets spawned than I was wondering what in the world a particular Forerunner device must have been used for, or what planet the map could be set on. This probably also explains my typically middle-of-the-pack-at-best performance in the competitive side of Halo, but that’s a whole different blog subject. Fiction fans have long been enamored with the myriad of locations that make up the map sets available in Spartan War Games simulations. Even though the Halo 5: Guardians Multiplayer Beta was just that – a beta, many of you have expressed a desire to know a bit more about the maps where countless Spartans sharpened their skills. If you count yourself among those curious legions, then you are in luck. Here are the descriptions for all multiplayer maps showcased in the beta.

One of the first vessels assigned the Fleet of Particular Justice, Undiminished Entelechy and its sister-ship, Purity of Spirit, were surreptitiously ordered to conduct a close-range survey of the holy ring by the Prophet of Stewardship shortly after the arrival of the Pillar of Autumn. There it took aboard several great servant-machines of the ancient Forerunner gods, as well as a vast store of records harvested from the installation's outlying archives. Unfortunately, the ship was burned out of the sky by Thel 'Vadamee after it was boarded by Flood, to prevent the parasite's escape.

Its crew dead after crashing on Halo, the Undiminished Entelechy was quickly obscured by plant growth preternaturally accelerated by the ring's damage control system and environmental remediation protocols. More pressing dangers ensured that the broken ship - and the wonders it contained - would pass from UNSC and Covenant records and memory when the great installation was shattered. How details of the vessel passed into ONI hands for use in War Games recreations - and for what purpose Spartans are being tested in them - remains unknown.

Resentment of Earth's tightening grip on the colonies and excesses by the megacorporate council that served as Andesia's de-facto government led to an explosion of Insurrection activity in 2523 that reached even the protected facilities of AMG Transport Dynamics located in the capital, Noctus. Nearly a decade of bloody rebellion followed, until the threat of the Covenant finally aligned the interests of the Insurrectionists and UNSC in a common goal: survival.

Some question the wisdom of War Games simulations being set on the colony of Andesia, as anti-UEG tensions remain high on the colony even years after the end of the Covenant War. This constant threat of renewed Insurrectionist activity requires that Spartan operatives be constantly drilled for the eventuality that they will be called upon to secure strategic facilities in the colony during similar periods of chaos and unrest.

Unusual activity on an intact Halo demands thorough investigation. When strange structures appeared on Delta Halo's surface, ONI forwarded the basic layouts to Spartan teams for immediate familiarization and tactical exercises, with the expectation that they would soon be sent to the ring and deal with any Sentinel, Covenant, or Promethean forces that would prevent close scrutiny.

Though based on incomplete remote surveys, the Orion War Games simulation is a best-guess reconstruction of unusual Forerunner buildings that appeared seemingly overnight at key power and data junctions on Delta Halo; around which local Sentinel forces suddenly became actively hostile and organized.

War Games use a mix of props, holography, and simulated sensory information fed through a neural interface to create truly lifelike training environments. Though frowned upon by some UNSC leaders, the use of this system for inter-fireteam competition and off-duty entertainment has proven quite popular among Spartans.

The UNSC Infinity counts among its crew some of the most skilled War Games programmers in the fleet. Though kept busy creating environments for real-world combat ops or scientific simulation, a small cadre of designers and artists wheels-and-deals in favors to create custom spaces optimized and balanced for arena Slayer and Breakout fans.

Hopefully these lore morsels leave a tantalizing taste for what’s in store later this year. Also, many keen-eyed fans have made note of some of the newer Covenant ship designs in skyboxes showcasing otherwise well-known events, such as within the Fleet of Particular Justice’s presence at Alpha Halo in the map “Truth”. It’s important to keep in mind that the War Games simulations can create a variety of scenarios that ONI and the UNSC can find very useful. Imagine it as sort of a “what if” situation for not only the Spartan-IV soldiers honing their skills, but for captains and admirals alike who are looking to gain any tactical advantage they can, both on the ground and in space. How might the events of Alpha Halo have been different if the Fleet of Particular Justice had been made up of different ships in the Covenant arsenal? Simulations like these help keep the UNSC brass polished and ready for nearly any situation. At least, that’s certainly what they hope…

Before we close this edition out, many of you already know that Canon Fodder began as a feature within the Halo Bulletin before more recently being split off into the Universe section as you see it now. We’ve gone back and republished those original entries into their own posts within the Canon Fodder archive, and you can find them by searching under the Canon Fodder option in the drop down menu in Community Blogs, or you can jump straight to them from here:

So that’s all for this week, hope you enjoyed a closer look at the fiction behind the Halo 5: Guardians Multiplayer Beta maps, and we hope that you’ll join us again here next time for MOAR LORE.

Until next week… Live well, play Halo, and always remember where you put your Keyes.

The Jet Pack is an apparatus that provides limited flight capability in a gravity well and full maneuver control in microgravity operations.

The Bubble Shield is a deployable equipment system that creates a spherical force field when activated.

Originally designed for farming purposes, the Brutes reconfigured the Chopper, transforming the machine into a swift and violent assault vehicle.

The Sniper Rifle sees extensive anti-personnel use due to its long range and ability to penetrate both dissipative energy shielding and heavy armor plating.