Welcome back to a brand-new Canon Fodder, folks! It’s been a while, hasn’t it? If you’re new around these parts, Canon Fodder is a fiction-focused feature that pops up from time to time on Halo Waypoint to discuss some of the finer points of the Halo universe and its ever-expanding lore. Today, we’re "expanding" into another one of my favorite fictional universes – Gears of War. That’s right, ladies and gentlemen, a couple of beloved S-III super-soldiers are back, but this time they’re trading their Assault Rifles for Lancers, and taking on a very different type of Drone.

As our friends at The Coalition recently announced this week during the gamescom festivities in Köln, if you pick up the Ultimate Edition of Gears 5 you will gain access to the Halo: Reach Character Pack, which will include the following items for use in Gears 5 multiplayer:

The Emile-A239 and Kat-B320 characters are playable in all multiplayer modes, both PvP and PvE (such as new Escape and beloved Horde modes – think Firefight). Also don’t forget, you can get the Gears 5 Ultimate Edition as part of Xbox Game Pass Ultimate, which also lets you play the game four days early. In all honesty, that’s a pretty ridiculous deal. Plus, all of the rest of the Gears titles are also on Game Pass, so if you’re interested in catching up on the story and prepping for the next chapter, it’s the perfect way to do it. For more details on all of the aforementioned included contents, make sure you check out the Gears team’s blog over on Xbox Wire.

Imagine for just a moment…[modifier]

Partnerships like these are some of my absolute favorite projects to be part of, as they provide fun and exciting “what-if” scenarios that let fans and creatives alike explore outside the normal boundaries of the universe. Whether it’s booting up Forza and barreling through Edinburgh in a Warthog, raising your UNSC sails while traversing the Sea of Thieves, or lock-n-loading Lancers with Marcus Fenix and the Gears gang, experiences like these provide a glorious fresh new lens through which to experience and appreciate the Halo universe.

Noble Two, we’ve got something a little… unique, and it needs your immediate attention. Three weeks ago, a mining crew at TC-858 stumbled upon something that our xenoarcheologists are having a tough time making any sense of. Seems like there’s a piece of very old technology embedded within the asteroid – we’re not sure if it’s Forerunner or something else entirely, but it does seem to act as some sort of gateway to… somewhere else. Initial exploratory probes yielded evidence of an unknown life form – it’s not Covenant, but it's sure as hell still hostile.

We need to know more, but we need to keep this quiet. We’re sending you and Noble Four to investigate. We can’t afford to pull all of Noble from its current assignment, but we like the unique combination of your and S-A239’s skillsets for this particular endeavor. Observe, reconnoiter, and above all, get back safely. We’re going to need Noble at full strength soon, especially after Fumirole. And yes, we mean “full” strength.

A prowler will extract you both from at your current location at 0800 tomorrow and take you directly to TC-858. Good hunting.

Talk about “other duties as assigned…”

Kat has quickly adapted the fabricator to produce more efficiently. She is able to build fortifications and repair them to establish a base for the team. Her decoy ability confuses enemies and keeps them away from her work.

An inspired tactician and brilliant warrior, Kat-B320 was hand-picked to serve outside the standard SPARTAN-III deployment plans as a result of her exceptional abilities and potential. Withdrawn from combat shortly before Operation: TORPEDO, which resulted in the deaths of nearly all of Beta Company, Kat was eventually placed on Noble Team, where she excelled in battlenet management, tactical planning, and intelligence synthesis.

Taking the fight to the enemy, Emile thrives in any combat environment. His Drop Shield can save the team from almost any threat. He can engage from any range but prefers to get up close and personal with his shotgun and knife when possible.'

Activate a protective Drop Shield that prevents any projectiles from passing through.

Now there may be some of you regular readers of this space who might be unfamiliar with the Gears of War universe itself. And of course, as this feature is designed to inform lore-loving fans of fictional universes, let’s see if we can’t shed a little light on it in our typical fashion. 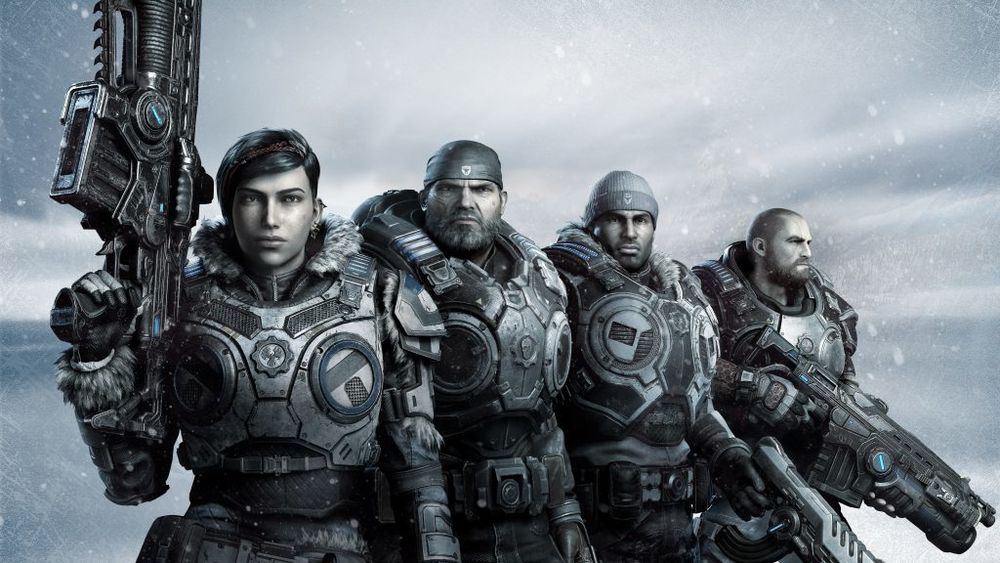 The Gears universe is centered primarily around the planet of Sera. Deep underneath Sera’s surface lay a luminescent but highly volatile, fluid known as Imulsion. This fluid would eventually be refined into a vital and sought-after energy source, leading to a nearly eight-decade-long conflict known as the Pendulum Wars, which saw Sera’s major political superpowers locked in battle – a conflict in some ways analogous to Halo’s Insurrection period.

Sera’s vast underground held another deadly secret – a deadly collective known as the Locust Horde. Emergence Day marked the moment the Locust Horde burst through onto Sera’s surface, laying waste to its cities and people. Standing in the Locust’s way was the Coalition of Ordered Governments (COG), and their brave military forces. Only the efforts of heroes like Marcus Fenix, Dom Santiago, Anya Stroud, Damon Baird, and Augustus “Cole Train” Cole kept humanity from succumbing to the might of Queen Myrrah, the Locust Horde, and other related threats such as the Lambent.

Now, decades later, the next generation of heroes – Kait Diaz, JD Fenix and Del Walker – find themselves carrying on humanity’s fight for survival, this time against a new and evolved enemy known as the Swarm. Introduced in Gears of War 4, the Swarm stands as Sera’s newest deadly challenge for humanity, and now, you can take on part of that challenge in the Mjolnir’d boots of two Halo heroes.

The Gears universe is also no stranger to telling stories in a variety of different mediums, with a number of comic series and novels (including some authors that might be familiar to Halo fans, such as Karen Traviss) to help expand their universe. In fact, one of those new novels came out just a few weeks ago. Penned by New York Times bestselling author Jason M. Hough, Gears of War: Ascendance picks up the story from the conclusion of Gears of War 4’s campaign and helps set the stage for the adventures in Gears 5. If you’re interested, you can check out a preview right here.

As we mentioned earlier, alongside the characters of Kat and Emile, the Gears 5 Ultimate Edition gives you access to Noble Team-themed player marker, profile banners, an Emile-visaged blood splatter, and entire suite of Noble-branded weapons (see below for some of our personal favorites). Keen-eyed fans of Halo: Reach in particular will take note that the weapons also feature the visual presence of a familiar patterned personality – a presence that extends to the Gears universe’s own artificial ally, Jack.

Funny enough, this isn’t the first time that Halo and Gears have shared the same game space. Just a few years back, the Arbiter and General RAAM were featured in one of the greatest fighting games ever made (objective truth), Killer Instinct. And with the awesome armor customization options available, you could put together a myriad of Sangheili vs Locust combos to combo.

In the fast and frenetic automotive soccer title Rocket League, Halo and Gears were represented respectively by modified versions of their iconic vehicles, the Warthog and Armadillo. Apparently both universes have a certain affinity for menacing mammal-monikered transports. 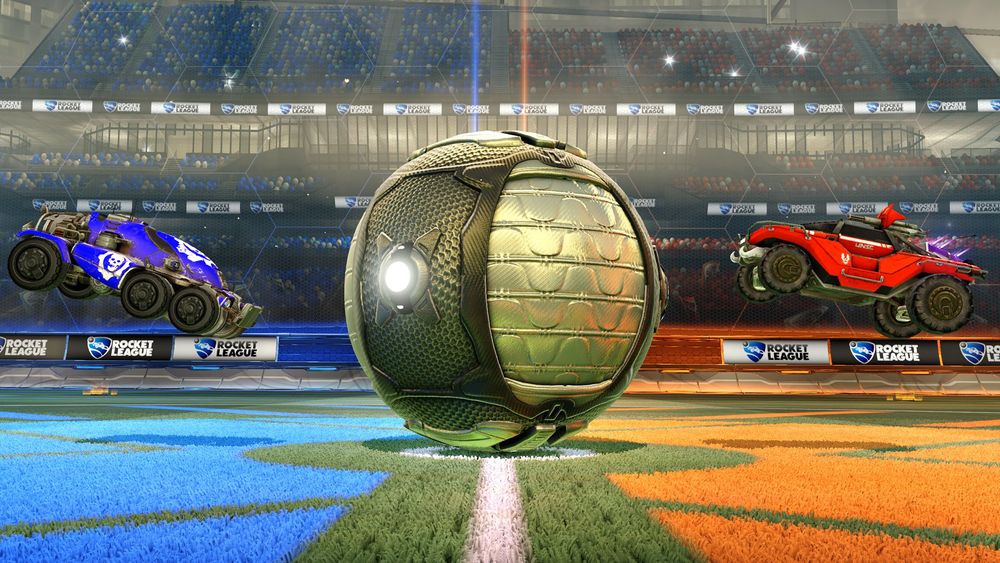 Speaking of pretending like you are playing Halo in other awesome game universes, make sure you jump into some Sea of Thieves this week to unlock the complete and expanded Spartan livery for your crew's ship.

Before we close today’s festivities, I’d be remiss to not mention that we’ve got one more stop in the opening year of the Halo: Outpost Discovery tour! I actually just got back from Houston a couple days ago, and had an absolute blast getting to meet so many awesome Halo fans all gathering under a shared passion for our favorite fiction. Our own Frank O'Connor even joined yours truly for a fireside chat called "Canon Fodder Live!" where we talked about Halo, its lore, and the process of both creating and curating fiction in the universe. Plus, we got to answer some awesome community Q&A! We're hoping to eventually get the VOD up later this year for folks to enjoy, even if they weren't able to attend in person, so stay tuned!

With Orlando, Philly, Chicago, and Houston all now in the books, it’s down to sunny southern California to give it a proper send-off for 2019. The Anaheim edition of Outpost Discovery is primed to be a fabulous finale, and rumor has it that fans of Halo’s extended universe might find some of the panel talent lineup that will be joining yours truly in SoCal to be quite enticing. Just saying.

And speaking of the Outpost, I feel like such a lore-laden event would be prime real estate for a Fodder focus sometime soon, eh? Only if that’s okay with you, though.

Anyway, with that, we draw to a close for now. If you're interested in hearing a bit more about how partnerships like the Gears 5 Halo: Reach Character Pack come about and get built, make sure you tune into today's 343 Social Stream on mixer.com/halo at 1:30 pm PT, as fellow Franchise Team fam Carlos Naranjo and Corrinne Robinson join snickerdoodle for a fun chat about the overall production process. Don't be late! Have fun and we hope to see you at either PAX in Seattle or Outpost Discovery in Anaheim. Both are sure to be a blast.

Until next time… Live well, play Halo, and REVIVE ME!

P.S. – In the continued spirit of crossovers, I'll actually be hosting this week's #ForzaFriday stream for our friends across the sidewalk at Turn 10 Studios. If you're interested, tune in at 3pm PT on mixer.com/forza and come cheer me on! I could use some Halo community representation, and you can also bet there will be some Warthog shenanigans happening at some point. See you then!