And now, for a bit of fiction fun. The past couple weeks have produced some pretty awesome moments for fans of the Halo story and universe, so let’s catch up on everything that’s been happening!

This week, a contingent of 343 staff (that’s a lot of staff) descended upon sunny San Diego, California to join thousands of other creative culture lovers and proudly present an array of Halo heraldry at the San Diego Comic Con - in fact, some of our staff, like Consumer Products guru and periodic Livestream-crasher James Monosmith, seem like they had more fun than others. I caught up with our very own Dan Ayoub by giving him the wrong meeting room number and cornering him for a few thoughts on his SDCC experience. Let’s hear what he had to say…

“Another Comic Con is done! I have to say, after about a decade of going to this show, I am always still amazed at the sheer volume of people, and they amazing creativity on display. You folks are amazing.

We had a lot of great things going on there this year from a Halo perspective, but a couple in particular stood out above the rest for me. One was our story panel, where we dove into a bit more detail regarding the upcoming setting for Halo Wars 2. In addition to talking story, and the process of creating some awesome new characters, we introduced Isabel, the new AI making her debut in the game! Erika Soto is bringing her to life, and just amazingly captures the fire and sense of almost vulnerability that we wanted with this character. I’m thrilled with the response to her so far!

We also had the game playable at the show. We had a huge number of people come by and play, and really these are the best moments for us, as we get to interact one on one with the people playing, hear what they like, what they’d like to see – it’s just magical.

Thanks everyone who came to the panel or swung by the play the game. You are the reason we do this!

Thanks, Dan! Speaking of that story panel, if you haven’t gotten a chance to watch it yourself, you can do so right here.

In addition to the panel itself, we also unveiled a pretty sweet new story-related Halo Wars 2 ViDoc that pulled the curtain back on the inspiration, narrative, and artistic direction of the upcoming RTS title. If you’ve already seen it, CLICK IT AGAIN. Please, think of the children.

Part of our recent Halo Wars 2 info onslaught also included a few awesome initial details on some brand new characters to the Halo universe. We’ll take a quick look here, but be sure to head over to the breakdown from our friends at Gamespot for even more info.

Isabel is a smart AI created to manage logistics at a UNSC outpost on the massive Forerunner construct known as Installation 00, or "The Ark." Halo fiction fans might remember that the UNSC has been working hard to establish a presence on the Ark, and in 2555 were involved in a joint task force mission with a group of Sangheili there during Operation: FAR STORM (Learn more in Halo: Hunters in the Dark!). When Isabel’s base was destroyed in a surprise attack by the Banished she was powerless to stop the slaughter of her friends and colleagues. Following the loss, she swore revenge against Atriox, and is more than eager to do whatever she can to deliver proper retribution.

Decimus is truly a “Brute’s Brute” in the ultimate sense of the word. Aside from standing alongside Atriox in hatred of the Covenant empire – and anything that remains of it – Decimus has also enjoyed more than his fair share of wreaking havoc on humanity. And now on the Ark, he has yet another opportunity to do just that. Also, Shredder-style gauntlets. 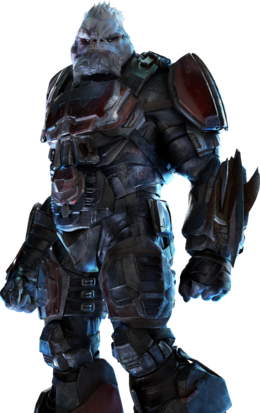 Truly one of the most intriguing characters to be introduced, Let ‘Volir is the walking embodiment of the current state of the Sangheili race – courageous but conflicted, he fosters animosity towards virtually all sides that aren’t under his own command. He looks with distain upon the Arbiter’s attempts at peace with humanity, but sees the Covenant as ultimately nothing more than a falsehood that crippled his people and repressed their nature. For now, he can comfortably call nowhere home, save for his ship and his crew, and will do whatever it takes to ensure their futures – even if it means working alongside the Jiralhanae. 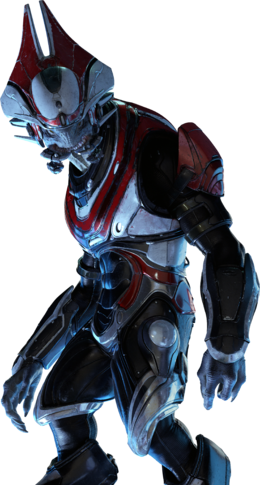 One of the many incredible SDCC-exclusive Halo products on offer last weekend was a very special Spartan HELIOSKRILL figure from Mattel. And while it might be biased of me to say, one of the coolest aspects of this figure in particular was the bit of extended lore that lay lovingly crafted upon its collectible packaging. We know that many of you couldn’t make it to the show to grab the figure for your own shelf, so we thought it might be nice to share the small story spoils with you here.

The first – and so far only – Mjolnir variant not designed by humans, the Helioskrill’s pattern-language was composed by a Sangheili artisan-armorer of unsurpassed brilliance and insight in the arts of war. Fully compatible with all Mjolnir GEN2 techsuits, the Helioskrill implements even heavily classified and encrypted Mjolnir neural interface protocols, despite the Sangheili prodigy having only minimal UNSC assistance available to her. Other systems are modified versions of those found in traditional Sangheili combat harnesses, such as the pinch fusion reactor and nanolaminate armor plates.

Available in limited numbers to the UNSC through an undisclosed agreement with the Kolaar Manufactorum on Sanghelios, the Helioskrill remains one of the most exotic Mjolnir sets in the Spartan armory. Spartan commanders use the possibility of its acquisition as an incentive to drive their troops to victory in War Games exercises and historical simulations.

Tune in next week for a few sweet narrative nuggets to nosh on from our friends at Spartan Games. Might be neat.

This week’s Community Spotlight is creating quite the sizzle around these parts. Introducing “Killer Bacon” by UEG Ren – an experience that will give “splattered by a Hog” an entirely terrifying new meaning. Also, we checked the barn for new leaked Halo content, but none was to be found. We think.

[Desk update #3: Balto's desk is full of incredible toys. All of them exclusively Halo and Harry Potter-related. I ate a spoonful of secret powder I found on his desk in a vain attempt to become more like him. Now my stomach hurts. A lot.]

This edition of Play of the Week comes from community member Crony, who mused “First time trying this on Molten, and everything went better than expected.”

And with that, we draw another week to a close.

Until next time… Live well, play Halo, and don’t forget to make friends along the way.