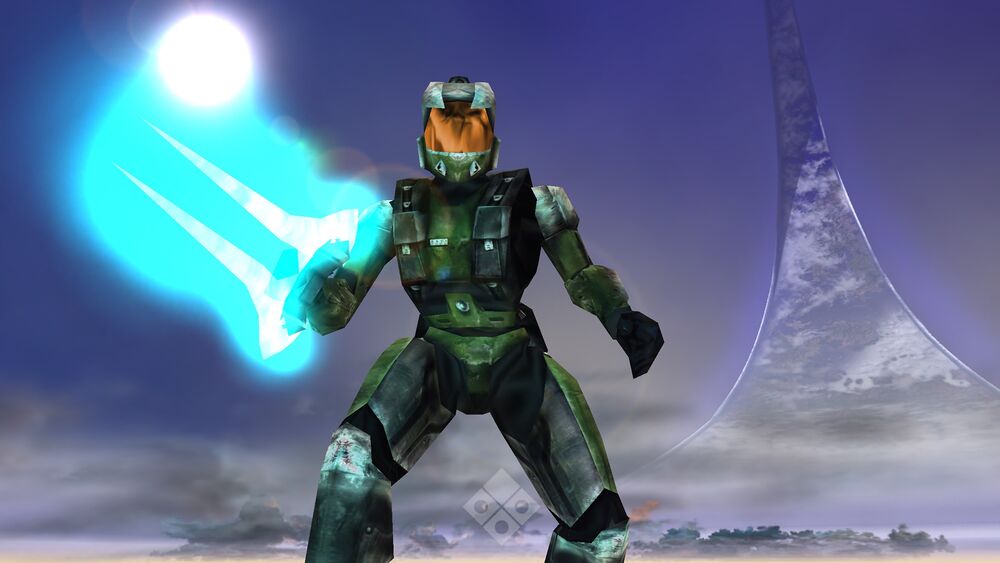 Today, we conclude the “Cutting Room Trilogy” with a special issue of Canon Fodder.

In this three-part series, we've explored the following:

PART 1: Cutting Room Floor - digging into the cut content from 1999 MacWorld-era Halo, Halo: Combat Evolved, and Halo 2 that is being restored by the Digsite crews.

PART 2: Cutting Room Corps - introducing the fine folks of the Digsite crews who have been working to revive this old content and learn more about their work.

And now, we have a special encyclopedia-style issue providing more details on how certain elements from these past games are incorporated into the universe and canon.

This "stuff" is your history![modifier] 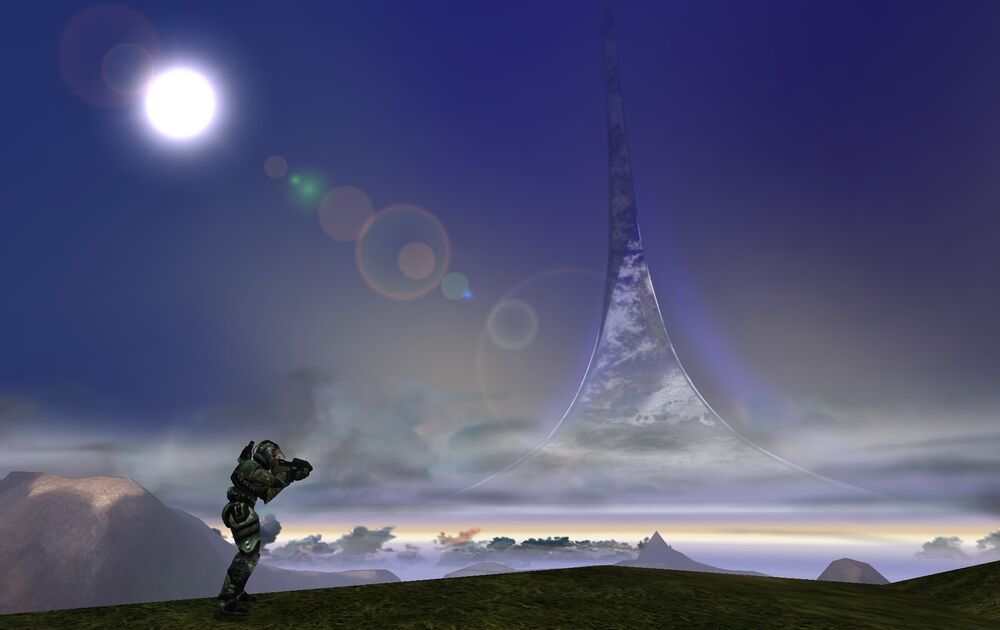 For those of you who may just be joining us, need a refresher, or simply don't know, Halo was not always the Xbox classic that we have known and loved over the last two decades.

In its infancy, Halo was a Real-Time Strategy game which was built using a modified version of Bungie's Myth engine, complete with helicopters and hummers before they became Pelicans and Warthogs.

Towards the end of 1998, RTS Halo evolved into third-person shooter Halo, which featured a partially broken Halo ring and dinosaur riding (yes, really!). This version of Halo was shown at MacWorld 1999 during a keynote from Steve Jobs, which was also the very first showcase of Halo itself, with Jobs promising an early-2000 release.

The debut demo began with the iconic theme playing over a cyborg soldier standing in a circular chamber (which we would later come to recognize as Installation 04's control room) before heading into a Covenant-occupied hangar filled with Banshees. Waving at the energy sword-wielding Elites, the cyborg leads them out into the open where two other cyborg soldiers are gathered by a Warthog, driving off together and causing mayhem as Covenant forces pursue them across Halo's rolling green hills in Ghosts.

Come August 1999, Bungie entered into a publishing partnership with Take Two Interactive and they were invited to meet with Microsoft the following January as the launch portfolio for a console called the “Xbox” was being worked on. Microsoft acquired Bungie in June 2000 (while Take Two would publish Bungie's previous games), and Halo was announced as a launch title for the Xbox.

After another exciting trailer showcase at E3 2000, focus shifted away from the “open world” element and centered more on emphasizing the combat and the character through which the now first-person camera was seen through.

The rest, as they say, is history. Complex, terrifying (and ultimately very simplified) history! 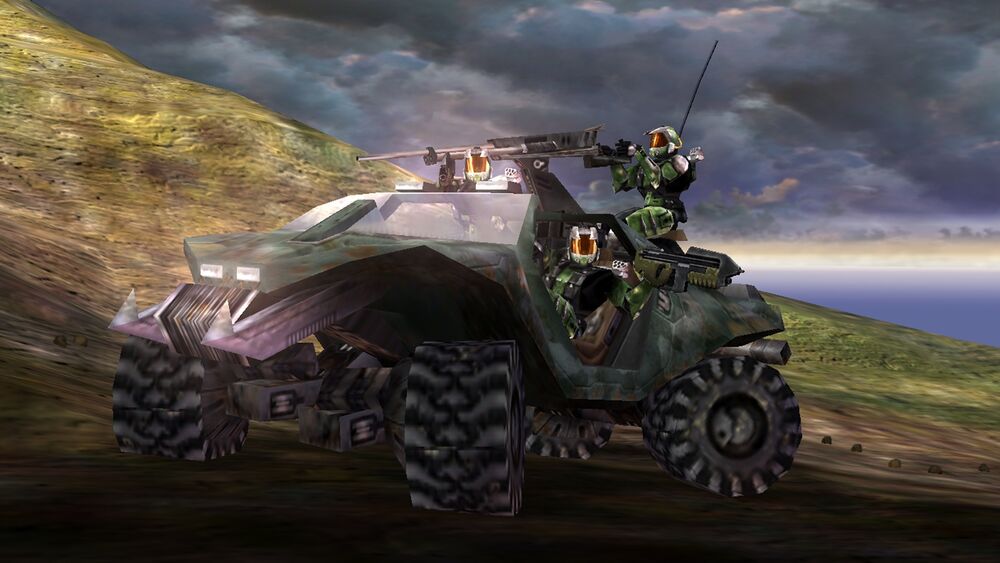 Throughout its years of experimentation and development, some things inevitably did not make it to the final release. Design issues, time constraints, performance problems, and many other challenges inevitably saw weapons, vehicles, NPCs, and even whole levels left on the cutting room floor—some would find their way back to the games in the years to come (such as the Huragok in Halo 3: ODST), whereas others have remained in half-known obscurity.

Today, we take a look at ten items from the cutting room floor of 1999 to 2004, excavated by our distinguished Digsite friends and partners, and detail their canonical place in the Halo universe. 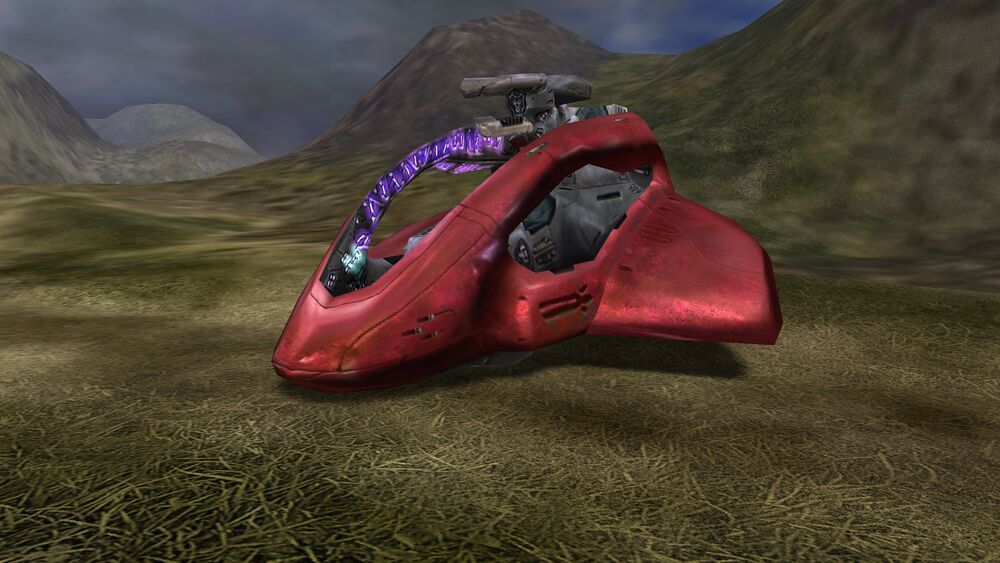 Designed by renowned transport architect Dren ‘Teconzee, the venerable Wuchek-pattern patroller (more commonly known as the Spectre) is an enigmatic but potent variant of the popular infantry support vehicle and outrider.

The Wuchek was never manufactured in large volumes, as it incorporated a number of heterodox engineering adaptations of ancient Forerunner mechanisms beneath its sleek, streamlined skin. As was typical of all his designs, ‘Teconzee was meticulous in his approach to modifying key elements of this variant's propulsion systems, navigation controls, energy generation, and weapons array.

The Wuchek cockpit carries one pilot and one passenger, while a dedicated gunner operates the lethal rapid-fire plasma cannon from a gun pod atop the vehicle. Either an ancestor or adaptation of the Mamua'uda-pattern Shade, this bespoke design was developed in-house for ‘Teconzee by Achoem Weapons as payment for some now-undocumented favor. 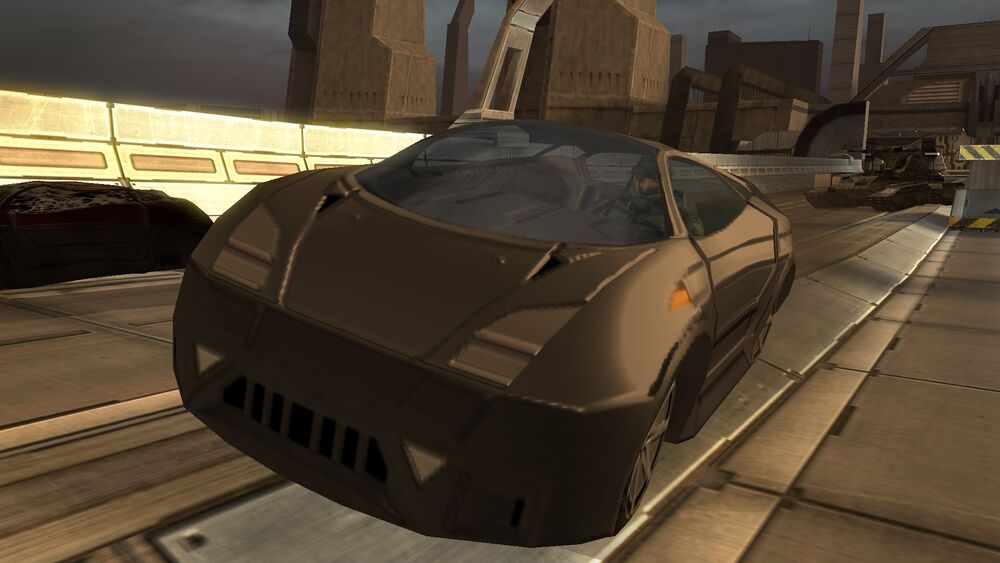 One of the most beloved and well-engineered civilian vehicles on the market, the Überchassis is arguably unrivalled in the terrestrial luxury performance segment in the eyes of consumers and transportation journalists alike.

Of course, the H2C lacks for nothing in the performance department as well, its unique hydrogen core power unit generating up to 873 kw to all four wheels with dynamic variable torque application for both maximum speed and safety across a range of driving conditions. 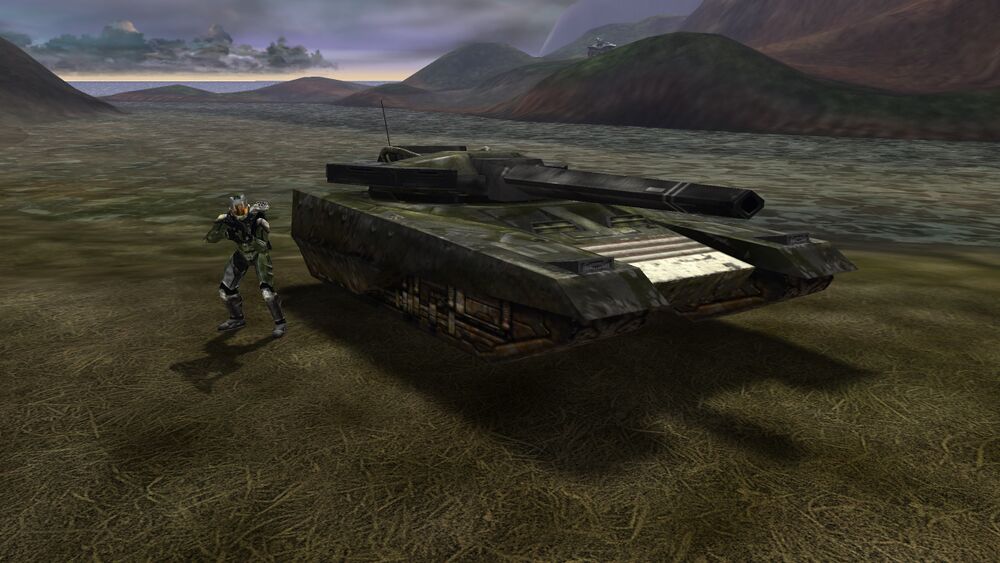 Introduced into UNSC service in the latter years of the Domus Diaspora, the M700 Viper main battle tank served in first tier Army units up until the early years of Operation: TREBUCHET.

The Viper's stealth features and speed led UNSC commanders to orient its mission to direct fire support and mobile response, with the larger and more heavily armored Scorpion taking on other front-line roles. 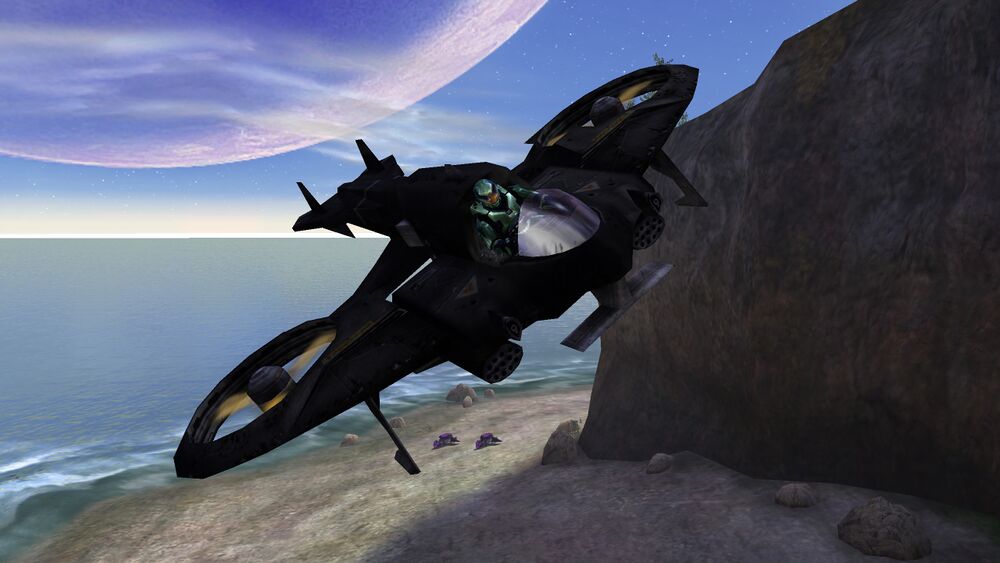 Commissioned as an easily transportable, low-cost ground attack aircraft for the CMA, Vestol's JOV-99 Kestrel served—and continues to serve—on dozens of colonies as a reliable, easy to maintain light strike and battlefield support aircraft. It was considered for UNSC service after the effective dissolution of the CMA, but strong lobbying by Misriah Armory meant that their Wasp was selected to replace Kestrels earmarked for UNSC Army and colonial militia service.

Misriah Armory would eventually borrow elements from the original Kestrel for its Light Assault VTOL project, but this ultimately failed to achieve the flight performance characteristics of its more versatile namesake.

The Kestrel was designed for frontier use and service, with most production done by colonial industries and contractors, with minimal components needing to be sourced from Inner Colonies. While the Wasp is a capable aircraft, UNSC Army garrisons, local defense forces, and militia groups still have little reason to transition to an airframe that requires constant off-world maintenance inputs. For this reason, Vestol continues to profit from marketing upgrade packages and selling new licenses for local manufacture. 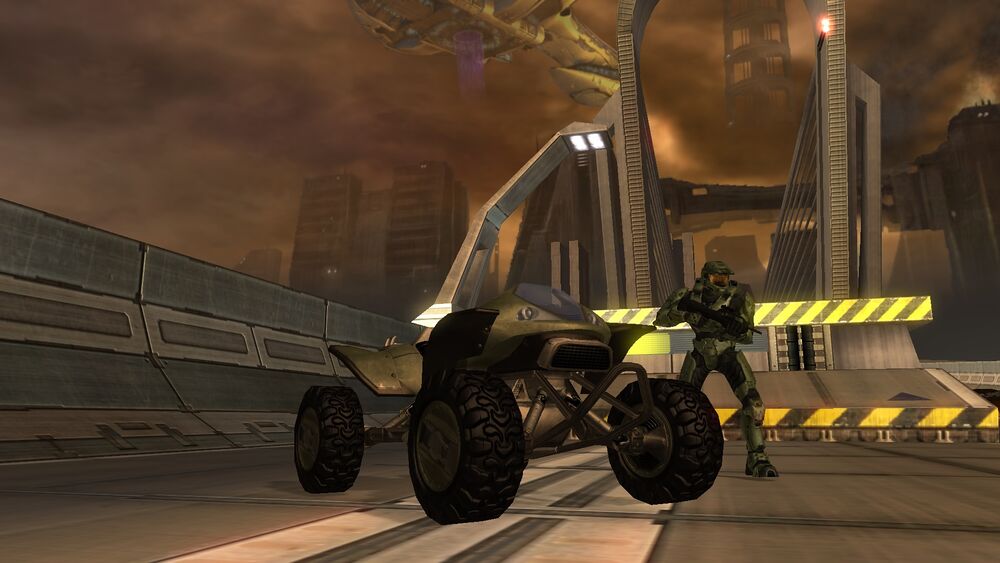 Light, cheap, and fast, the M270 was the mainstay utility quadbike with the UNSC for several decades, until it was finally replaced by the M274.

In addition to its military service, this nimble but rugged Mongoose generation spawned civilian versions as well for both recreational and motorsport use, with the homologated R270 variant earning wide success in customer hands across several colonial rally series. 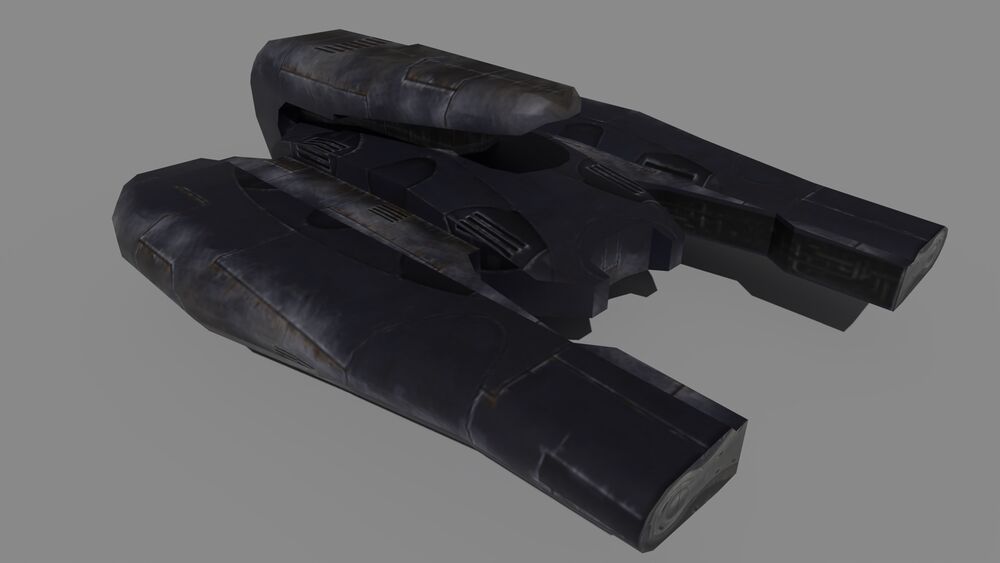 Roughly analogous to executive shuttles used by the UNSC and megacorporations, Covenant command shuttles transported military and clerical authorities in a manner that befitted their rank and stature. Few were ever directly encountered by human forces, but their appearance merited priority tracking and targeting.

While none were common, the R'ea'kuk-pattern command shuttle was among rarest, and most were assigned to service high-ranking Prophets on missions away from High Charity. They bore many features in common with Dextro Xur (Spirit) dropships, but carried a capital-ship grade proselytization array and defense augers that protected it from most standoff attacks. 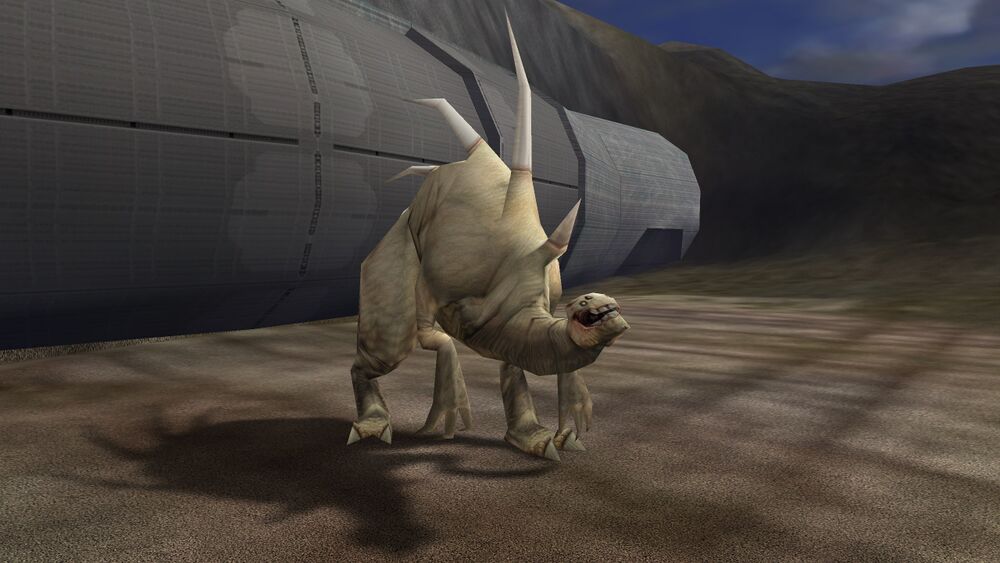 Fostered on post-cataclysm salvage worlds in the Lifeworkers' effort to rebalance struggling ecosystems, saaliban became particularly important to the Jiralhanae, as the creatures were among the few herbivores that continued to thrive on Doisac after it was ravaged by nuclear warfare. For their people, it has totemic and practical significance, with every element of its body having a useful function as food, tools, or chemistry. It can survive and thrive on an astonishing variety of worlds, and its population will self-adapt to a new regime in as few as three generations if properly attended. The Covenant made extensive use of this ability, seeding it on their own colonies in an unintentional echo of the Forerunners' own work.

[From the 2022 edition of the Halo Encyclopedia] 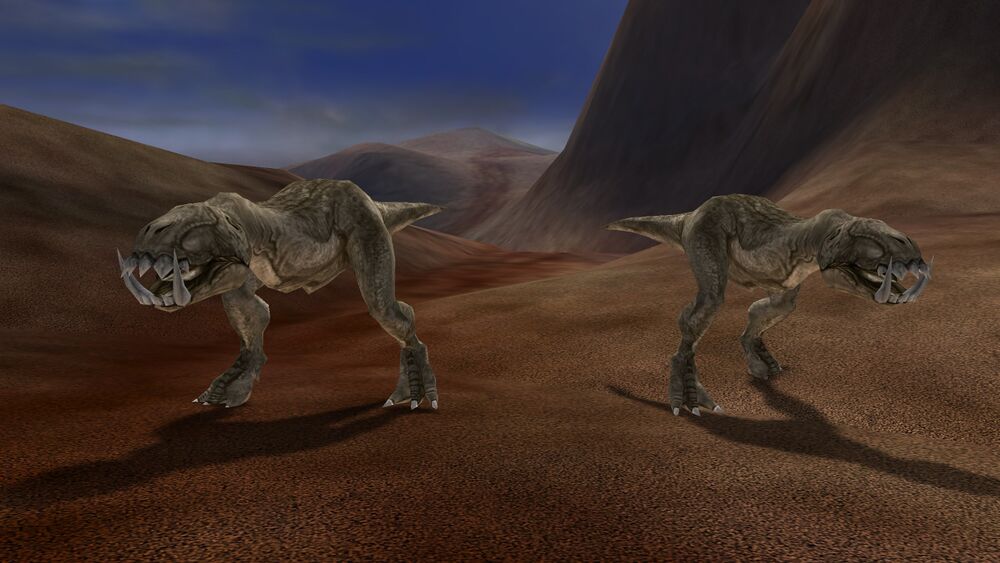 Deadly apex predators in all variations encountered to date, the morolaath blind wolves are highly intelligent pack hunters that represent one of the most dangerous examples of wildlife found on and near Forerunner installations. They can be readily keyed to specific hunting ranges, while their acute senses make them particularly well-suited as a tripwire species for detecting early Flood infestation and incursions by unauthorized sapients. Lacking sight, the morolaath navigates and hunts primarily by way of sound, and will coordinate remarkably sophisticated attacks on larger prey.

[From the 2022 edition of the Halo Encyclopedia]

"Keelbugs" (or verivorr in Forerunner records) are living tools created by the Lifeworker rate to fulfill myriad duties in the maintenance of artificial environments.

Adapted from extraordinarily intelligent insectoids on a world long consumed by the Flood and blasted of life by Halo, the keelbugs appear in a million minor variations specific to the needs of the Forerunners at that location. Most serve as scavengers and food for more complex creatures, and their biology is optimized for both nutritional value and ensuring equilibrium in managed ecosystems by cleaning up corpses and other biological debris. They are aggressive to interlopers from other environments and have been known to swarm intrusive species as part of an ecological first-line defense. 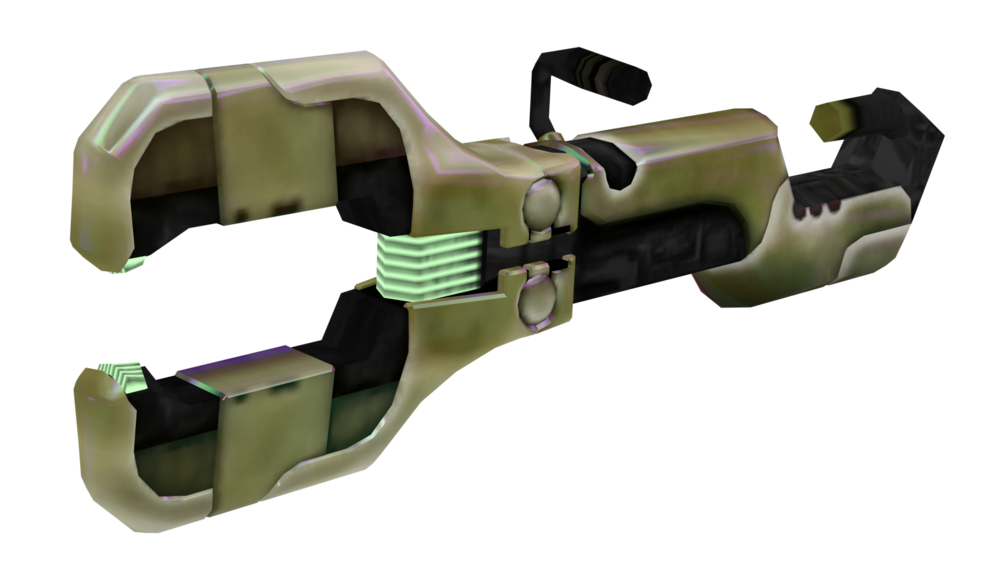 The so-called “gravity wrench” showcases few of the sleek intricacies of Forerunner assemblages and armigers that have been more commonly encountered by the UNSC in recent years. Popular theory suggests that the gravity wrench predates known records of the Kradal conflicts and possibly provides a window into some of the aesthetic and functional sensibilities of their society's Miner rate, of which much remains a mystery.

The gravity wrench prominently features two large prongs which extend outwards as they generate a compressed gravitic field through either scaled down or notably archaic torsion drivers. The effects have drawn comparison towards contemporary augmentations known to have been made to the Fist of Rukt, though the San'Shyuum seemingly pursued more offensive developments for Jiralhanae war hammers than the nature of the gravity wrench would suggest. 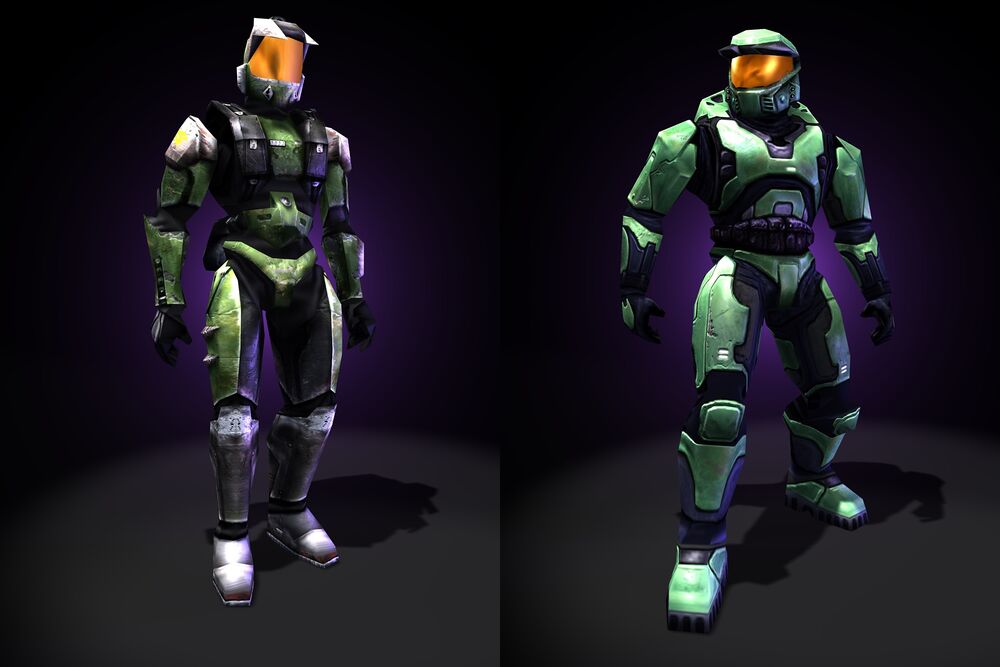 As we conclude this Cutting Room Galore trilogy (though this is by no means the last you'll hear about this restored content), we want to extend our thanks firstly to the Digsite crew for their incredible work in bringing so much of this stuff to life.

Secondly, of course, to the Halo community. Your enthusiasm and love for this historic content over the last month has been felt across the galaxy, we can't wait for you to get your hands on it for yourself once it's ready.

It's hard to overstate the impact that even cut material from Halo has had on fans. Despite not appearing in the game, these things leave an indelible impression, to the point that many folks out there create art imagining what their presence in the universe might be. The piece below comes from the artistic titans Espen Sætervik and Rythaze, showcasing the gravity wrench being utilized by a trio of Forerunners. We're excited to see what other elements might work their way into the community's artistic endeavors. 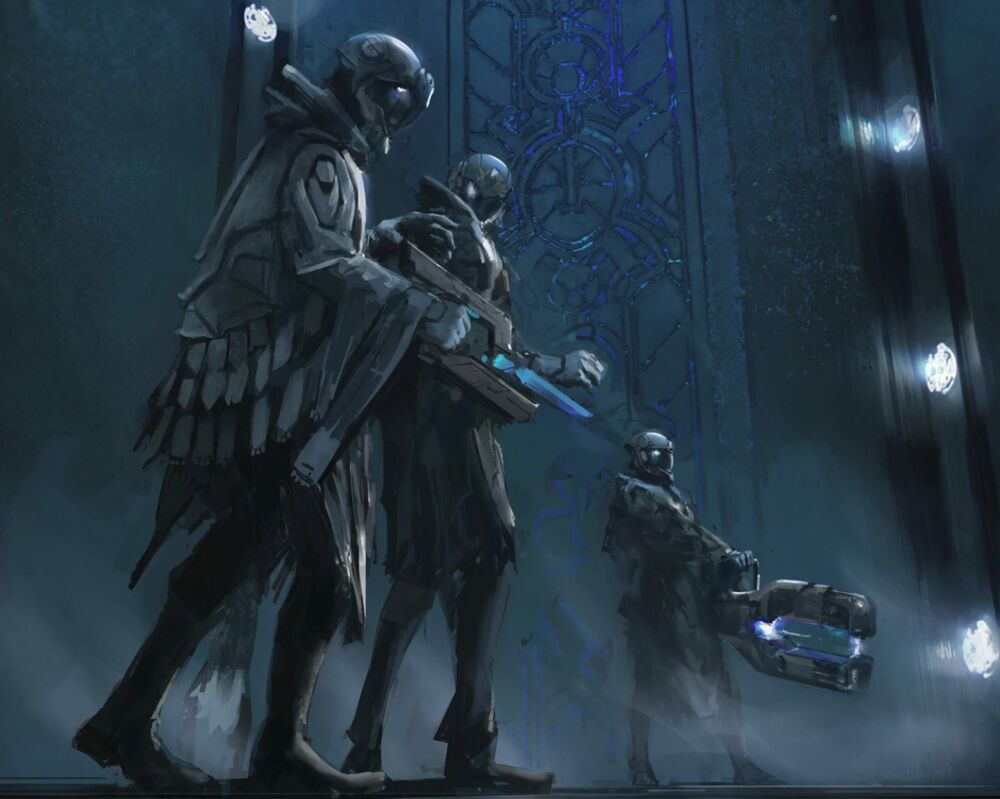 And finally, Sean T of the Digsite crew also wished to provide this old marketing render of the 2000-era Master Chief for your nostalgic wallpaper purposes, which you can check out below in all its 8K glory! 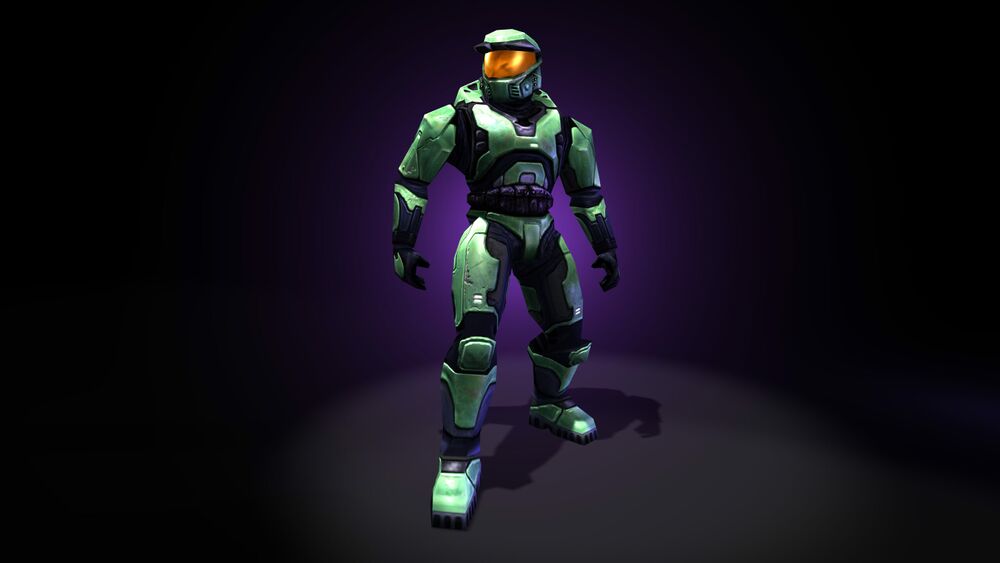 This marks the end of our second issue of Canon Fodder for the month, but we'll be back once again next week with a final preview of Halo: The Rubicon Protocol (which releases August 9) and an interview with the incomparable Kelly Gay herself.

Until then, immerse yourself in the history of pre-Xbox Halo, and don't forget to clean up your Alpha Pack event pass in Halo Infinite as well!