Welcome back, folks, and thanks for joining us for another round of your favorite Fodder. Last week, we took an early look at the fiction behind the upcoming Warzone map, Skirmish at Darkstar, chatted canonical competition, and more. If you missed it, check it out here. This week, we’re going to take a look at some of the sweet new loot that will be accompanying our next content update for Halo 5: Guardians, Ghosts of Meridian. Up today is a Mjolnir variant for the up-close-and-personal crowd, a particularly lovely and lethal gravity hammer, and some highly modified UNSC materiel. Before we dive in too far, I do want to give personal congratulations to Counter Logic Gaming and its members – LETHUL, ROYAL 2, SNAKEBITE, and FROSTY – on taking the Halo World Championship last weekend, as well as a cool one million dollars. And congrats to fan-hero Brett “Naded” Leonard for taking home the series MVP, and to each and every team for bringing their best to make the Halo WC and absolutely outstanding event. Hopefully, as Halo fans, you’ll take an opportunity to celebrate them as well, because trust me, as competitive Halo continues to grow and succeed, we will all benefit. But back to business, let’s lore! 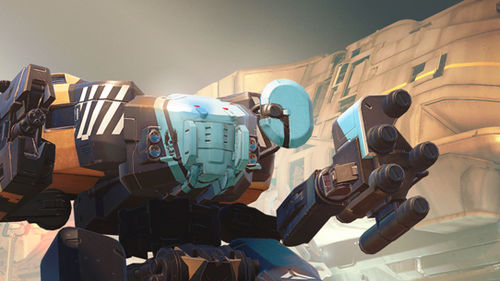 Our next hot drop of continuing content for Halo 5: Guardians is drawing near, and this week we wanted to dive a bit deeper into some of the sweet new sandbox additions you'll be able to get your gloves on when it all goes live. There's a new Mjolnir variant to don, some vicious new hammers to swing, and a couple of powerfully pimped rides with which to storm your opponents' proverbial castle with. Let's go ahead and take a look at what's coming up, and don't forget to take a gander at Bravo's latest Community Update for even more info on what to expect from our next salvo. 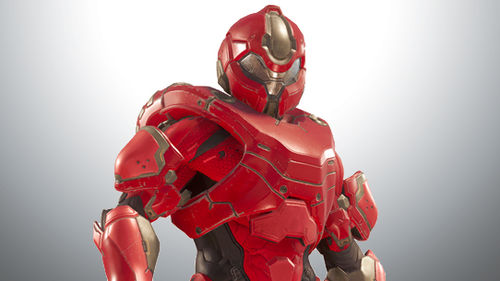 Armor: The DYNAST is a "brawler" armor variant that excels in close-range firefights through a combination of resilience and improved situational awareness.

Helmet: Having in many ways effectively replaced older CQB and CQC designs, the DYNAST helmet shell is covered by layers of compressed carbon nanotubes and hyperdiamond sheets, making it fantastically durable . . . and expensive.

Looking for a little payback?[modifier]

One of my favorite additions that the Ghosts of Meridian update will bring is the addition of some sweet custom gravity hammers with which to crush your foes with. We thought it might be cool to highlight one of these in particular this week, as it's very name will carry a subtle significance among long-time Halo fans, especially ones who love some of the Covenant's more... brutal members. For this particular group of fervent fans, I offer this brief respite, a narrative oasis if you will, within the split-lipped showcase of our oftentimes Elite-centric atmosphere. 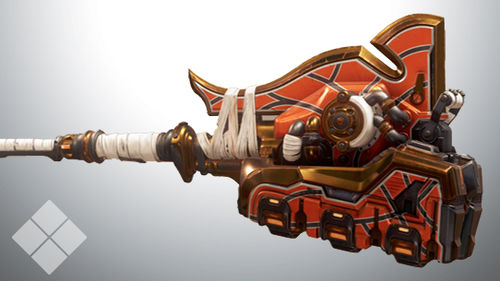 Tartarus was a ruthless Jiralhanae chieftain whose meteoric rise through Brute society and the Covenant military was fueled by vicious bloodlust and cunning politicking. By 2552, Tartarus had eliminated or surpassed all opposition in his quest to serve the at the Prophet of Truth’s right hand atop the Covenant empire, overwhelming all opposition among his own people to become Chieftain of the Brutes. At the Battle for Delta Halo however, Truth’s plans for Tartarus to crush the Elite’s opposition to his rule would be undone at the eleventh hour by the Arbiter Thel ‘Vadam and a small but united contingent of human and Sangheili forces. Tartarus’ death at the Arbiter’s hands ended the chieftain’s plans to unify his fractious species, but his legend still inspires ambitious Brutes eager to build their own legacies.

During his ascent to power within the Covenant, Tartarus used his relationship with the Prophets to reward loyal lieutenants with advanced weaponry secretly forged within the Sacred Promissory. These vicious and unique instruments of war helped assure the rise in both position and influence of his own pack, and cemented key loyalties when grander machinations began to unfold.

It puts the Laser in the Mantis[modifier]

Specializing in security technology development and small arms, Hannibal Weapon Systems, based out of Kotka, Pori of New Carthage, now primarily focuses on the manufacturing of Mjolnir armor systems. Additionally, HWS has also recently been working with the UNSC on some particularly impressive prototype upgrades to various vehicle systems, two of which will be finding their way into your REQ collection soon in Halo 5: Guardians. In addition to providing our normal fictional context, we thought it would be fun to grab one of 343 Industries’ incredibly talented Vehicle Designers, Tim Temmerman, to give some extra insight on the development of these new toys, both from a fictional and development perspective. 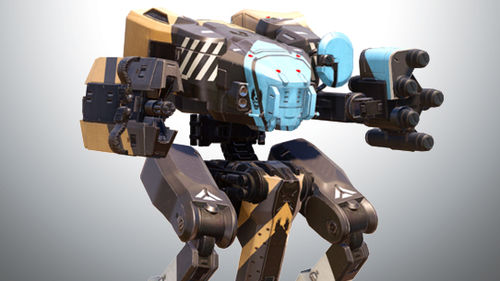 "With the Hannibal vehicles, we wanted to create a feeling of this experimental tech that’s barely contained and brimming with this unpredictable and lethal energy. That was the design behind the Hannibal Mantis – it’s sort of a “what-if” Mantis that isn’t ready for full production, but hints at some of the skunkworks tech being developed.

"Since players are pretty familiar with the base Mantis, we also wanted to provide a bit more strategy for skilled players – something that’s useful in the hands of a novice but absolutely deadly when used to its full potential. To that end the shields have been boosted a bit, and the downtime when your shields are broken is reduced. While the overall armor is not as high as an ONI Mantis, if you can quickly engage and retreat with the Hannibal Mantis, you’ll be able to manage your shields easier and stay alive longer.

"The chaingun has been replaced with a slower-firing, but brutally heavy hitting Gauss repeater. It’ll overheat quickly, but if you manage your heat well and fire precisely, you can deal massive damage to enemy vehicles. The missile launcher is a favorite of mine, and plays into the whole ‘unpredictable and lethal’ aspect of the Hannibal. When each missile hits it releases several submunitions that cause sporadic and wide-spreading damage. This weapon was designed to damage or take out clustered groups of infantry.

"Lastly as we played into the Hannibal experimental tech theme, we added an EMP overcharge to the normal Mantis stomp attack. This is very useful for disabling nearby vehicles and expands on the tactics that can be employed with this Mantis."

This is but one of Hannibal Weapon Systems' tank test beds fitted with the latest in vehicle-borne directed energy weapons. Advanced Scorpion with heavy armor and fast-discharge laser currently undergoing trials within UNSC Infinity War Games.

"As with the Hannibal Mantis, the inspiration behind the Hannibal Scorpion was a skunkworks-style prototype military vehicle that isn’t quite ready for full production. With the rarity and high-level of this vehicle, it gave us an interesting position from which to design a new Scorpion. Thanks to a massive Spartan Laser type beam weapon mounted to the Scorpion cannon and a heavy-hitting gauss repeater turret, this might be the most lethal vehicle in the Warzone lineup.

"I admit I’m a huge fan of beam weapons, and since the days of Halo: CE I’ve always wanted to see what a beam-equipped Scorpion would play like. The Hannibal theme with this Scorpion opened the door for this, and from the first prototype we knew the beam cannon was going to be awesome. As an added layer of depth for more advanced players, the beam cannon works well because rather than an instant, single-hit projectile, the beam damage is spread out over a fraction of a second. That doesn’t seem like a long duration, but it opens up different attack methods, like a sweeping attack that lightly damages multiple targets, or a concentrated attack that drives all the beam’s energy to a single target.

"In keeping with the Hannibal theme, we’ve reasoned that a prototype military corporation might reuse some of its best assets across multiple platforms. To that end you might notice that the Hannibal Mantis gauss repeater behaves very similar to the anti-infantry turret placed on the Hannibal Scorpion. Aside from damage tuning for balance, we wanted to establish a connection across multiple Hannibal vehicles where you can start to recognize the tech in which this corporation specializes. Same goes for the blue accents, paintjob, and the sort of “unstable” and overcharged effects that let you know this isn’t a standard Scorpion.

"The art and audio teams did a fantastic job communicating that raw power and deadliness in the design, and I for one can’t wait to lay down some serious beamage with this thing!"

This past weekend during the aforementioned Halo World Championship finals, we debuted the world gameplay premier trailer of Warzone Firefight, coming this year to Halo 5: Guardians. It might just be my favorite mode to play here at the office each week, and I absolutely can’t wait for you all to get your hands on it as well. I’m thinking some Canon Fodder community playdates might have to be in order once it does… Now, while we’ll be talking much more in depth about the mode a bit further down the road, keen-eyed fans have already begun spotting a few particular notes of interest. And while the wait for more concrete info will likely have fans seeing red, it still doesn’t hurt to check out the trailer a few more times just to take in the awesome and start imagining the possibilities. Give it a look! 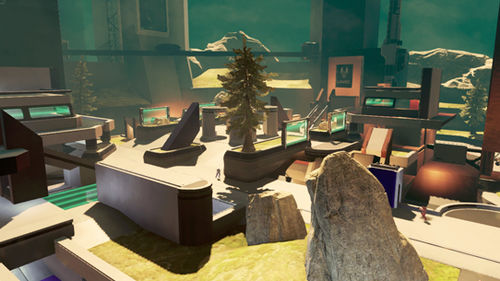 Earlier today, we released six new community-created, Forge-born maps into the Halo 5: Guardians Big Team Battle experience. For more information on the maps individually, fans will definitely want to check out Bravo’s Community Update. For our purposes however, while these obviously aren’t “normal” playspaces from a Universe setting perspective, we thought it would be fun to give them a touch of fictional context anyway. Make sure you jump in and play!

As the UNSC struggles to maintain a cohesive presence across colonized space, it’s inevitable that organization infrastructure must adjust and adapt. With many departments stretched ever thinner, the military has even begun recruiting young deign talent eager to make a name for themselves into the War Games simulation program via the UNSC Cartographer Initiative. This had led to an influx of fledgling simulation environments incorporating new architectural ideologies and advanced tactical challenges to help keep the Spartan Branch operating at razor-edge efficiency. 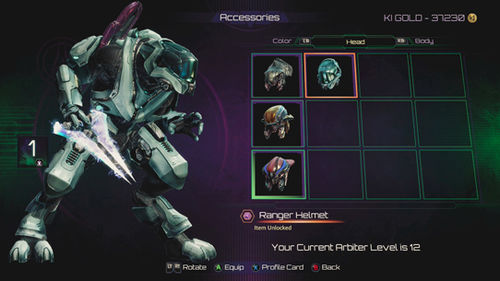 This week, the fine folks on the Killer Instinct team asked me to write up a guest piece to help give an overview for their fans on the nature of the Sangheili, and a primer for what the Arbiter character will bring to the table in Killer Instinct Season 3 when it hits this coming Tuesday. Think of it as a companion piece to what we did in Issue 64 of Canon Fodder a few weeks back. If you haven’t checked out the new piece over at Ultra-Combo.com, you might want to, as Halo fans will get to see some pretty incredible variations on some bold and beloved looks.

In addition, this Wednesday I joined KI Community Manager – and former 343 Industries Community Coordinator – Rukari Austin for the Microsoft Studios “Game W/” stream to play some Killer Instinct, chat personal backgrounds, old stories, Arbiter development, and generally just have a blast. If you didn’t catch the stream when it was live, you can check it out right here. Just don’t hold my W-L record against me personally…

And with that, we’ll draw this particular issue to a close. Thanks as always for joining us, and we look to have you back next week, when we take a loo – wait, isn’t next week?… oh my. Well, at any rate, we’ll just say “see you then” and leave it at that.

Until next time… Live well, play Halo, and if the Oracle says one more word, I'll rip the eye from its socket.

The Scorpion is the UNSC’s main battle tank, with an extraordinary track record of success across dozens of planets and hundreds of battlefields.