The Champions Bundle released yesterday! I had a chance to sneak in some games in the playlist, and noticed that everyone loves their new stuff - in particular, lots of Prefect armor, loyalty stances and Assault Rifle Teeth skins. Also, you could say that Ricochet may have been the most popular voting option. Okay, okay, everyone voted for Ricochet. This week, I bugged some 343'ers about their favorite parts of the Champions Bundle DLC, and also weighed in myself. 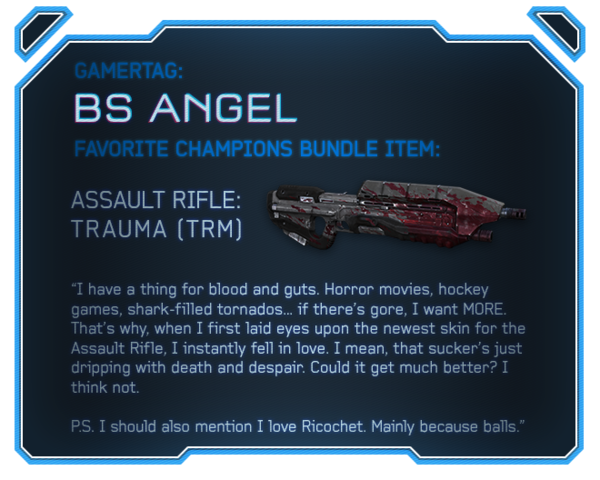 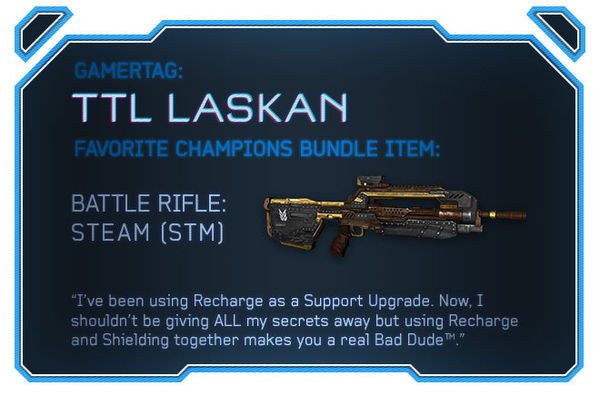 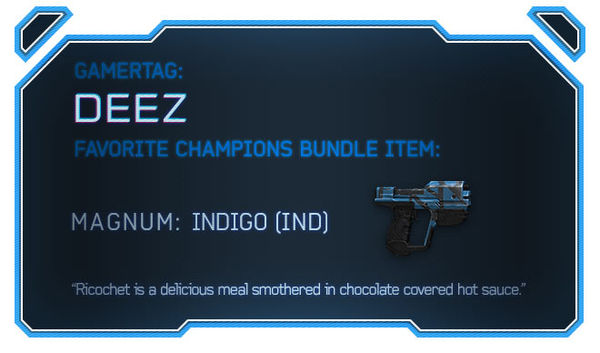 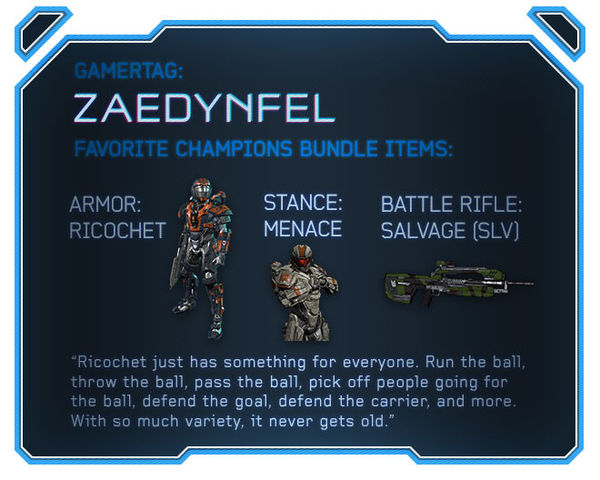 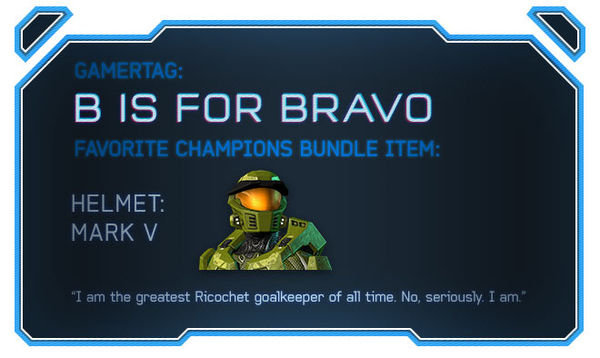 Speaking of awesome armor, we've also updated the Halo Waypoint app on Xbox 360 to include the new armors in the Champions Bundle, which means that players who have Kinect can check out their new armor in Spartan Reflection. 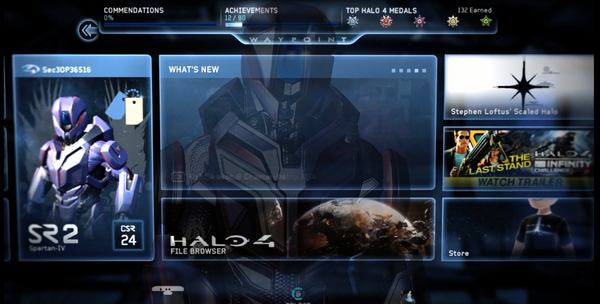 Prefect armor being showcased in Spartan Reflection in the Waypoint Console App.

As a reminder, even if you haven't picked up the Halo 4 Champions Bundle yet, there are new shiny toys waiting for you in Halo 4. Two new Support Upgrades, Survivor and Recharge, are now available for you to try out in your Loadout. For the full details of these armor mods and the update, head here.

After five grueling weeks of competition over Xbox LIVE, the Halo 4 Global Championship online qualifier has come to a close. With tons of competitors looking for the top spots each week, the online qualifier brought out some of Halo 4's top talent. As each week concluded, fewer and fewer spots remained, and only the most dedicated players can say that they'll be heading to Seattle in just over a week. This said, here are the confirmed winners from weeks 2-4. For weeks 2 and 4, you'll notice that we have listed only three confirmed players - we have recently removed players who were identified as cheaters, and are currently waiting to hear back from the next eligible players.

If you are a week 5 winner, you'll be receiving an email this week (if you have not already). Keep an eye on your inbox.

We will be giving away 10 final spots in the Halo 4 Global Championship invite bracket on Twitter this week! If you are already planning on attending PAX Prime, local to the Northwest, or able to travel to Seattle next weekend, keep an eye on the official Halo Waypoint account for details on how you can secure one of the last spots in the tournament.

If you are one of the hopeful competitors in Germany this week, we've got some additional details for you.

Part of the team is in Cologne, Germany this weekend for Gamescom! As a reminder, the last chance to qualify for the Halo 4 Global Championship finals is the walk-up, in-person tournament at the Xbox booth on the Gamescom show floor. Thursday, Friday and Saturday will feature individual tournaments, with the top two FFA players each day advancing to the finals in Seattle. Again, we cannot guarantee that all attendees will be able to participate ('cause Gamescom is kinda' huge). However, if you are 18 years of age, meet all other eligibility requirements in the rules and are willing to immediately hop on a plane to the United States to compete in the finals the following weekend against other top players for a $200,000 first place prize, then get yourself over to Hall 6 early each morning for a chance to get a spot in the competition. Best of luck, Gamescom, and we can't wait to have the top 6 players join us in Seattle next weekend! 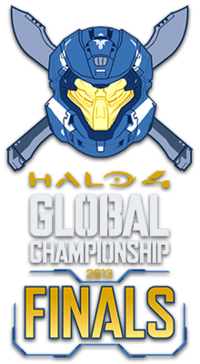 The Halo 4 Global Championship finals will be taking place in Seattle, WA from August 30th - September 1st, and we'll have gameplay streaming live all weekend. To watch the preliminary rounds on Friday and Saturday, head over to http://www.Twitch.tv/343Industries where we'll have gameplay from some of your favorite players, and floor reporting with updates, player interviews and match commentary. Be sure to tune in to see which players are able to advance through to Sunday!

For Sunday's final matches, we've teamed up with Xbox LIVE to present the Halo 4 Global Championship at PAX Prime 2013. The world's best Halo players will be competing at Benaroya Hall, where the top 8 will battle it out during a live two-hour broadcast on Sunday, September 1st beginning at 4pm PST for a chance to win $200,000. The tournament will be hosted by Xbox Live's Major Nelson, Blair Herter and Jessica Chobot. On top of competitive gameplay, the tournament will also feature play-by-play commentary and analysis by Alex "Goldenboy" Mendez and yours truly, as well as post-match interviews and highlights.

In between rounds, the livebroadcast will feature several Xbox One exclusives, Rooster Teeth shorts, three musical acts,and more. The Halo 4 Global Championship Finals are open for spectating to all PAX attendees, who will also have an opportunity to participate in the Red vs. Blue Sweepstakes for a chance to win awesome prizes, such as an Xbox One or UNSC-themed Surface Pro (see, told you they were awesome). If you're viewing on Xbox LIVE, you can also chime in on Twitter by tweeting the official tournament hashtag (#Halo4GC), vote for which trailers you want to see via the Xbox LIVE interactive experience, enter the Twitter sweepstakes and more. 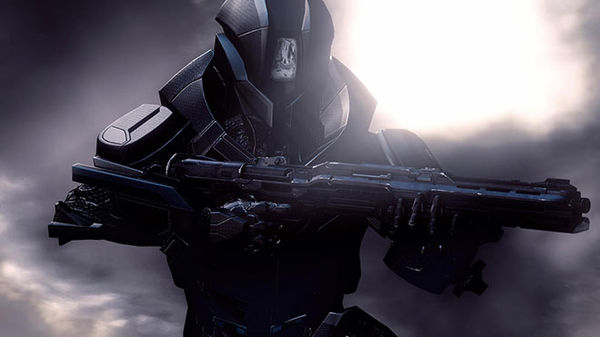 The next regularly scheduled playlist update will be on September 3rd, and there are a few upcoming items that are worth highlighting. Before that, though, we've got some updates coming this Monday.

In Ricochet, we are updating the score limit to 200, as we've seen that some games are ending a bit quicker than expected. Also, all random ordnance will be disabled for Ricochet matches. Lastly, we're updating the Pitfall map variant across the board so that the Shotgun is no longer placed on initial ordnance, but rather an on-map weapon. It will still be located in the same exact spot and respawn every three minutes, but will have one spare clip and will not have an ordnance indicator above it. 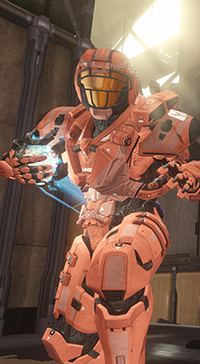 On September 3rd, when Ricochet becomes available to all players, we'll be releasing an official, limited-time-only Ricochet playlist, where you'll be able to play Halo 4's newest game type across six different maps. Based on feedback from the Champions Bundle DLC, we'll be optimizing the game type's settings. Overall, we may be adjusting score limit, time limit and goal placement to create optimal settings across all maps. The map selection will be as follows:

Ricochet will also be included in the Multi-Team playlist on September 3rd. We're very much looking forward to seeing community-forged Ricochet maps and considering them for Matchmaking at a later date. We also have a feeling that heavily customized Ricochet mini-games are going to be awesome.

As mentioned in the 5.22 Halo Bulletin, we have been evaluating the best way to consolidate Halo 4's Matchmaking playlists, and there are several factors we look at when considering playlist consolidation. Per playlist, these include minimum and maximum concurrent population, unique players, average games played per session, total time played per session and more. The effort started last week with Regicide moving into Rumble Pit, and will continue with Legendary Slayer moving into Infinity Slayer on September 3rd. Specifically, we'll be adding Legendary BRs on several maps into a single voting spot in the playlist. If you want to get some final matches on the current version of Legendary Slayer, be sure to hop into the playlist before the next update on September 3rd. We'll have more info about upcoming playlist changes in the future.

bs angel also likes screenshots. This said, here she is!

Last week, we turned the spotlight on the color green. This week, we decided to go with everyone's favorite two-seater. Take a gander at the following Mongoose screenshots, and then capture your own for your chance at being featured in next week's Bulletin.

For your chance at being in the next spotlight, take a screenshot on the new map Pitfall, and then tag it with "Pitfall" and "Halo Waypoint", and maybe, just maybe, yours will be featured in the next Halo Bulletin!

With that, this week's Bulletin comes to a close. If you'll be online in the Champions Bundle DLC playlist this week, I'll have my heels on the edge of my platf on Pitfall. See you there.