At the time of this writing, there are approximately five days left until the 11th day of November. In past years, this date may not have held great significance, but if you’re like us, you may have had a figurative “X” on the calendar since June of this year.

In just five days’ time, experiences both familiar and new await. On its 10-year anniversary, Halo 2 will return to Xbox Live, and bring with it a broad package of games and content. A newly re-mastered Campaign as well as a suite of re-mastered multiplayer maps have been prepared in Halo 2: Anniversary. Halo: Combat Evolved will make its Xbox Live debut, and perhaps even provide an opportunity for some of you to play the game that started it all for the first time. Halo 3 and Halo 4 (along with all other titles) will make their Xbox One debut in full HD at 60fps. The Halo Channel will be your new home for entertainment and programming, including the first episode of Halo: Nightfall. In addition, new terminals, hundreds of achievements, and more await. Your journey is about to begin, and we hope you’re as excited as we are.

This week, we have a few new topics to cover, including skulls, LASO playlists, ranks, a new eSports league, and more. Let’s get to it.

Over the past few months, we’ve discussed skulls and campaign playlists, but now seems like an appropriate time to dig into these, especially when you consider that this is the last chance to do so. To get the latest, I grabbed Max Szlagor, Senior Designer on The Master Chief Collection, who proceeded to give me so much information that I just had to write it down. These etchings have been transcribed below.

The Master Chief Collection includes 37 different skulls, including several unique additions to Halo 2: Anniversary. Skulls are modifiers that can change Campaign gameplay in a variety of ways, and are closely tied to the Campaign scoring and timing systems, as well as leaderboards. With the exception of the pre-order skulls (which will unlock globally on December 12, noted with an *) and Swarm, every skull is unlocked and available from the start. Skulls are broken down into two categories: Scoring and Non-Scoring. Scoring skulls amp up the challenge and reward players with higher score multipliers or bonuses to base enemy values when turned on. Non-Scoring skulls can either be neutral, such as Grunt Birthday Party, or in cases of cheat-like skulls, have a score multiplier of zero. Zero multiplier skulls like Scarab disqualify level times and scores from being recorded on the leaderboard and disable achievements. 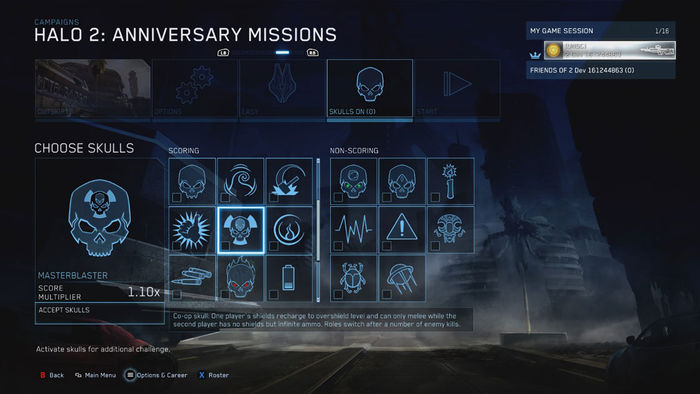 Here is a full run down of the entire skull list along with the games each skull appears in:

As many of you may have noticed, a number of achievements reward players for completing the LASO (Playing on Legendary with “all skulls on”) Campaign playlists in Halo: The Master Chief Collection. These achievements can be earned in either solo or co-op play. 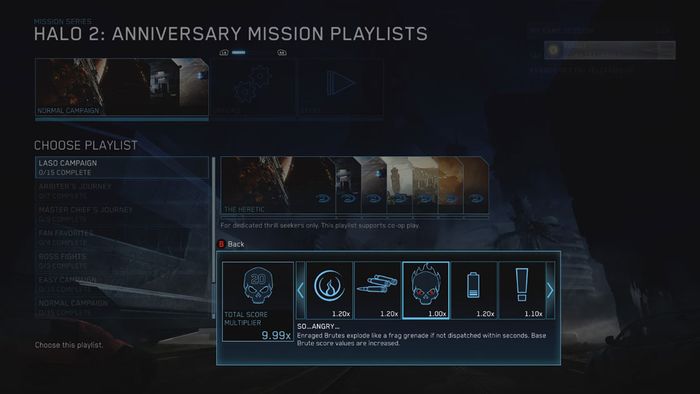 Here is more info on which skulls are enabled for each LASO playlist:

Each of these skulls should provide you with an opportunity to replay past missions (or play them for the first time!) with a variety new surprises, explosions, difficulty, and creativity. And with nearly all skulls unlocked, you have no excuses. Enjoy!

Since we detailed The Master Chief Collection’s ranking system with IGN,we have seen a few inquiries regarding further specifics, so we figured we’d talk a bit more about it.

As you’ve heard, the ranking system lives at the playlist level, meaning that you’ll have an independent skill-based rank for each ranked playlist. We also modified matchmaking to use new skill detection, which will put players into the fairest matches faster than any Halo game to date.

Additionally, we built Halo: The Master Chief Collections’ ranking system to emulate the exact Halo 2-style leveling, but it is a system that has been built from the ground up. This is the first time we’ve built a Matchmaking and ranking system that will work across multiple games, and as a result, we’ll be rolling out ranking for each playlist post-launch, and will launch with one ranked playlist, Team Halo 2: Anniversary. As time goes on, we’ll be rolling out the official ranked version for each ranked playlist. For example, the Halo 3 and Halo 4 playlists will not be ranked immediately at launch (however, they will still have skill matchmaking underneath to ensure balanced matches), but will each receive ranked play post-launch. As this is a new system custom built for this game, we do expect some players to make every effort to exploit the system, and will be agile in issuing fixes and updates. Additionally, if needed, we will reset ranks after launch to ensure that all player’s ranks are fair, consistent, and accurate. We’ll provide more details on ranking and the playlist ranking rollout in the near future.

Lastly, we have seen a few questions regarding where you rank will appear (specifically if it appears in the pre-game lobby) so this week, we grabbed a pre-game lobby Matchmaking screenshot from Halo: The Master Chief Collection. As you’ll see below, in Matchmaking, your rank will indeed be displayed in the pregame lobby, which means that you’ll be able to see the ranks of those you’re playing with and against before the match.

We’ll see you in a not-too-dissimilar pre-game lobby on Tuesday.

From the basement to the big stage, Halo has a rich legacy of competition that the large majority of us as fans can likely relate to. Whether it a debate about who was the best at Lockout 1v1, or who could play through The Silent Cartographer faster, competition and a healthy mix of bragging right-fueled rivalries have always been at the heart of Halo gameplay.

We share a passion to showcase, support, and just plain get excited about competitive Halo multiplayer, and this is where the Halo Championship Series was born. We’ve learned a great deal from last year’s Global Championship as well as this year’s gamescom and PAX Prime Showdown tournaments, and also taken a great deal of time to understand the current eSports landscape when building the HCS. If you haven’t yet caught the announcement, you can head here, check out the landing page here, and also read an article from our friends at Polygon here.

We’re being careful with how we approach Halo eSports, and believe that it is essential that we sponsor and support existing tournament organizers, partners, and sponsors to create a unified ecosystem. To accomplish this, we’ve teamed up with our good friends (and now old pals) over at Twitch and ESL to create a year of high-stakes Halo eSports, and we’re excited to get started.

We’ll have much more info in the coming weeks, including at this weekend’s the Halo: The Master Chief Collection Launch Invitational – tune into Twitch.tv/Halo starting Saturday at 2PM PST to learn more about what’s ahead for Halo eSports.

Last time, we looked a bit closer at the upcoming novel Halo: Broken Circle (out now!), which takes a closer look at the formation of the Covenant and the relationship between its two founding species, the Sangheili (Elites) and San‘Shyuum (Prophets). Fans of the powerful alien empire will also be particularly pleased at Halo: The Master Chief Collection when it drops on November 11, especially if they are willing to do a little exploring off the beaten path. One of the more increasingly popular features of the past few Halo games has been the inclusion of Terminals, which have offered players and even deeper look into the fiction surrounding their favorite characters, events, and factions. In Halo: The Master Chief Collection, the Terminals included in Halo 2: Anniversary will focus on the history of the Arbiter. Fans will learn more about not only the contemporary Arbiter, Thel ‘Vadam, but also be rewarded with never-before-seen glimpses into the history of the Arbiter role, and how it’s been employed – and exploited – by Covenant leadership throughout its history.

One of the most interesting aspects of the Halo 2: Anniversary Terminals is how they are presented from three unique perspectives. Whether it’s from the target profiles of Locke’s days as an ONI agent, the growing doubt in a Sangheili warrior as he begins to hear the truth, or the devout adherence to the path from a Covenant scribe, every angle is vital to seeing the entire picture. Of course, it’s one thing to talk about, but it’s entirely another see for yourself, and now that Halo: The Master Chief Collection is upon us, it’s time to go and get to unlocking those Terminals in-game! You'll have the ability to unlock them for viewing in the brand-spanking new Halo Channel. By discovering all Terminals in Halo 2: Anniversary, and you’ll unlock the Prologue Terminal 1, and by discovering all Terminals in the entire Collection (H:CEA, H2:A, H3, and H4), you’ll unlock Prologue Terminal 2. It might just be the perfect cure if you’ve got the Blues. This is a time to rejoice, a moment that all fiction fans should savor. For the Halo 2: Anniversary Terminals can be found, and with them, your path will be clear; your entry into a greater understanding guaranteed. Your next Great Journey is nigh, and nothing – not even the Flood – can stop it…

THE BULLETIN MOVING TO HALO CHANNEL[modifier]

Next week, when the Halo Channel premieres, there will be a welcome episode of The Bulletin, which will now be coming to you each Friday on the Halo Channel. Much like the ancient written form you are reading today, The Bulletin will provide you with the latest Halo news, community creations, and everything you need to know about the Halo universe that week. We’ll have special guests, interviews, Matchmaking updates, interactive programming, and much more.

The first full-length episode will debut next Friday, 11.14. We’ll see you then. 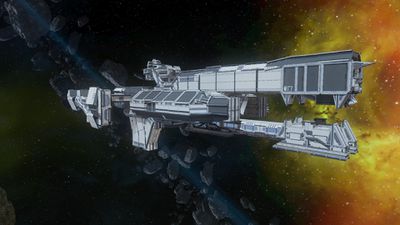 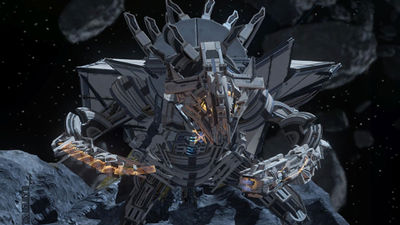 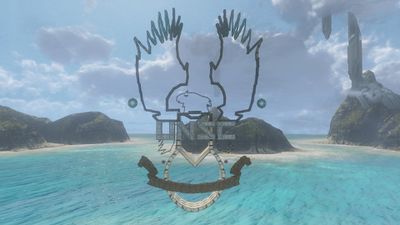 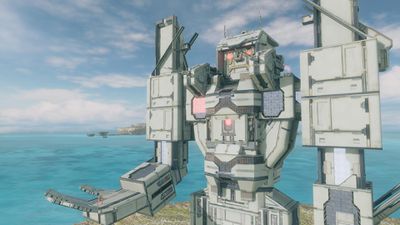 Lastly, be sure to tune into this weekend’s HaloFest live stream activities:

With that, my friends, this week’s Bulletin, and the written Halo Bulletin, come to a close. I’ll still be checking in with written content on a regular basis, but new and exciting times are ahead. Additionally, because the surface area of Halo: The Master Chief Collection is so large and includes multiple titles, we will be keeping an eye on any issues that arise post-launch, and be agile in communicating our response by providing regular updates on blogs, the forums, and official social media channels.

November 11 is nearly upon us. We hope you enjoy the journey.