Hey, Bravo here! As some of you know, we spent the past weekend down in San Diego for Comic-Con 2013. There were lots of people, lots of fun, and most importantly, lots of Halo. Let's talk about it. 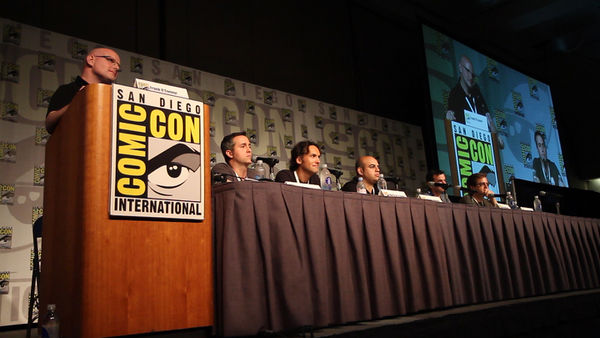 Halo was in full force in the Xbox Lounge, with the Halo 4 Champions Bundle playable for the first time, Halo: Spartan Assault on the floor, freebies and goodies available for fans, and two different Halo 4 Champions Bundle competitions. On Thursday, we held our "Inside the Looking Glass: Building Halo Worlds and Wonders, Past, Present, and Future" panel.

Panelists Frank O'Connor, Dan Ayoub, Graeme Jennings, Martin De Ronde, Brian Reed, and Nick McWhorter discussed the launch of Halo: Spartan Assault, which is now available, as well as the upcoming Halo: Initiation series from Dark Horse Comics. For Halo: Spartan Assault, we discussed upcoming content, controller support (coming in August), the ability to play across all of your devices, and more. You can check out all of the discussion, insight, and Q&A in video form here and learn more about the title and how to get your hands on it here. 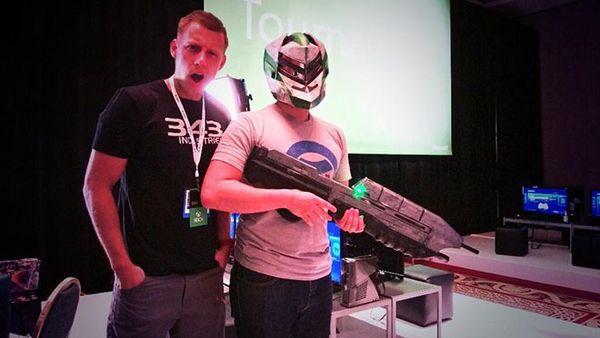 Quinn and I prepare for day 2 on the battlefield, er, tournament stage.

To showcase the content included in the Halo 4 Champions Bundle, in our booth we offered games of Ricochet and Capture the Flag on Pitfall and Team Slayer on Vertigo. Then, on Friday and Saturday evening, we held a 4v4 competition on these game types. Each night provided for some pretty incredible action, and you should absolutely check out the videos. If you'd like to see Ricochet on Pitfall, with insight into strategy, flow, and more, check out Friday evening's tournament.

On Saturday evening, we changed it up a bit and offered a wide mix of Champions Bundle content, with three different game types: Team Slayer on Vertigo, Capture the Flag on Pitfall, and King of the Hill on Vertigo. We had some well-known community members competing throughout the tournament, so be sure to check out Saturday's stream to watch the action-packed finals come down to the wire. The tournament streams also feature much of the new armor, skins, and bonus content that's included in the Champions Bundle (I specifically remember quite a bit of the Trauma and Teeth Assault Rifle skins). Quinnie and I had a blast checking out some 4v4 action on the Champions Bundle and absolutely cannot wait until the DLC is released on August 20. If you stopped by the booth or checked out the tournament in-person or online, thanks for joining us!

Hot off the presses! We've got three brand-new, exclusive Champions Bundle screenshots for you. These three shots, taken on Vertigo, highlight three new Spartan armors: The Prefect and ODST armor from the Infinity Armor Pack and the Ricochet armor from the Bullseye Pack. 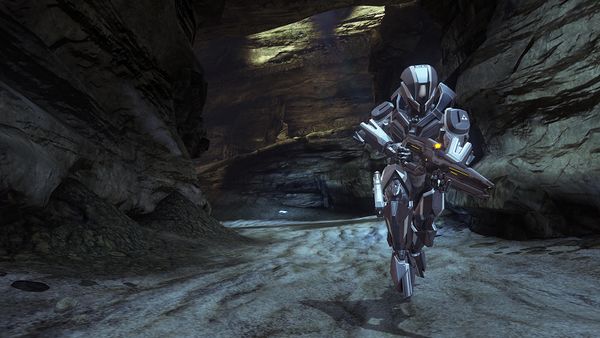 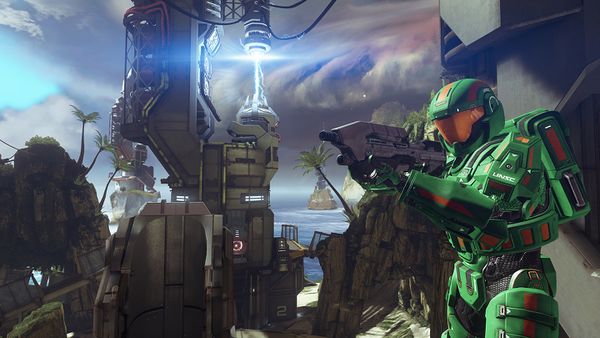 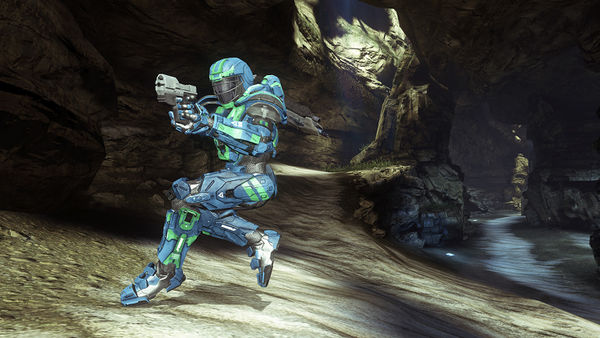 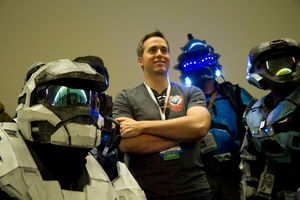 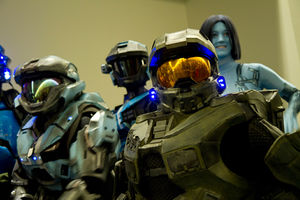 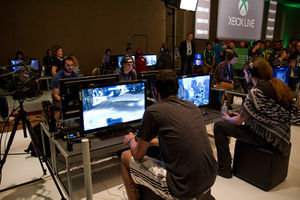 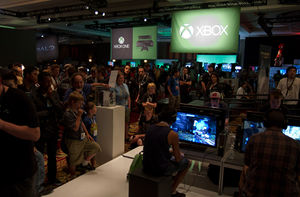 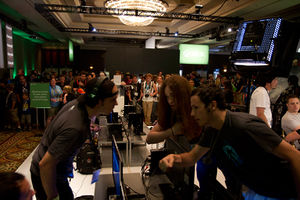 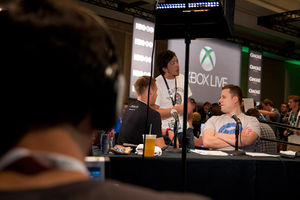 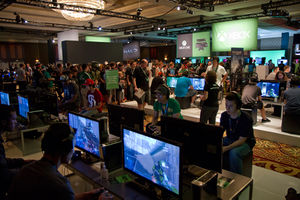 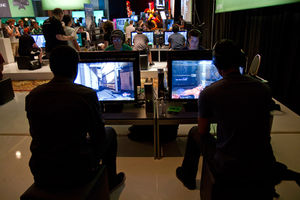 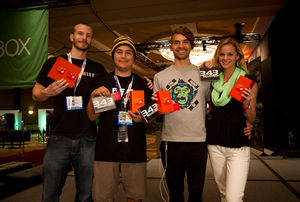 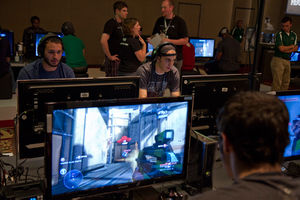 As you may know, we ran into an issue with the Halo 4 Global Championship leaderboard late on Sunday evening, which made the week 2 leaderboard temporarily unavailable. Our teams worked around the clock to resolve this issue, and we are pleased to say that we believe the leaderboard issue is now resolved. As we have messaged throughout the week, no data was lost, and any games that you played during the outage should now appear on the leaderboard.

Because of the leaderboard issue, we'll be delaying the final confirmation of the week 1 winners as well to ensure that all final data is correct. Keep an eye on Halo Waypoint and social channels for the announcement of the week 1 finalists who will be headed to the Halo 4 Global Championship finals. For now, let's take a look at week 2's newly updated leaderboard as of 7:30pm PDT today: 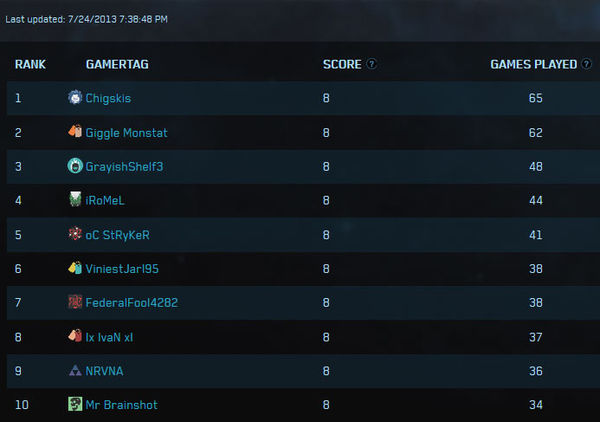 '
'As of this evening, the top 4 spots belong to Chigskis, Giggle Monstat, GrayishShelf3 and iRoMeL! If week 1 was any indication, though, these are likely to change by the end of the week.

Once again, we sincerely apologize for the inconvenience caused by the leaderboard issue, and wish all competitors the best of luck in week 2 and beyond! 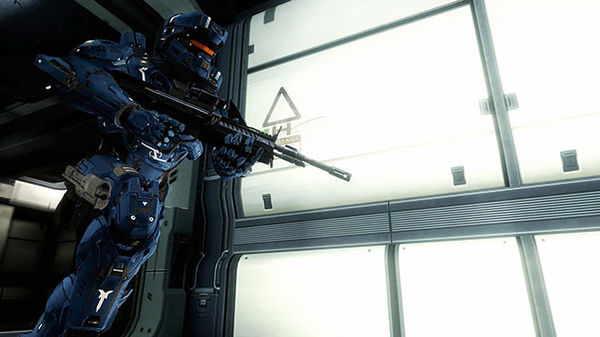 The game type for week 3 of the Halo 4 Global Championship is Rumble Pro. Here is a breakdown of the settings:

We're looking forward to showcasing Rumble Pro and Rumble BRs in week 3 of the Global Championship. The upcoming week will likely be the most competitive because the gameplay is focused on precision rifle usage and map control, with motion tracker enabled and personal ordnance disabled. The map variants for this week will be identical to week 1: Adrift, Abandon, Solace, Haven, Monolith, Skyline, and Landfall. Both game types will be available across the maps, with identical initial ordnance and on-map weapon locations. Best of luck to all week 3 competitors, and enjoy your Double XP!

In Spartan Ops, we are offering a selection of Covenant enemy-themed missions:

Lockdown in the Dominion playlist has been updated with several changes. To allow for an optimized attack / defend dynamic, motion tracker has been disabled, and auto-turrets and shield doors have been removed. These updates will make it more difficult to defend a base, and result in more back-and-forth style gameplay. Lastly, we've also made some updates to Legendary Slayer:

That'll do it for this week's Matchmaking Update. Now, onto another Screenshot Spotlight courtesy of the one and only bs angel.

Previously, we turned the spotlight on the Assault Rifle. This week, we decided to go with pictures that'll hopefully make you laugh. Take a gander at the following funny images, and then capture your own for your shot at being featured in next week's Bulletin.

For your chance at being in the next spotlight, take a screenshot on the map Landfall. Then tag it with "Landfall" and "Halo Waypoint," and maybe, just maybe, yours will be featured in the next Halo Bulletin!