As indicated by the specified date, beautiful banner, and string of numbers in the URL of this Halo Bulletin, we have officially entered 2014. While the last two weeks of 2013 were filled with family, friends, and firing Rockets off of the back of a Mongoose, I am extremely excited about what 2014 will bring, and revealing new things when the time is right (spoiler: the time is not yet right).

Here's a small taste of what we'll be discussing today: a brand new Community Choice Poll, the recent release of the second issue of Halo: Escalation, and an upcoming Halo 4 Community Playdate. Let's jump in! 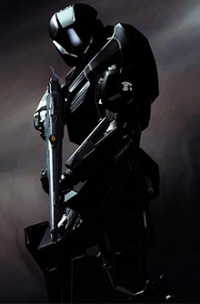 Just two days ago, Big Team SWAT was released into the wild of Halo 4 Matchmaking. The playlist features 8 vs. 8 standard, Covenant, and Forerunner SWAT on the following maps:

Big Team SWAT will be around until February 3rd, when Team DLC will move into the featured playlist slot. We'll have more on the specifics of that update next week, but this week, we've got a brand new Community Choice Poll. In this poll, you have the opportunity to select which new game type you'd like to see in the Team Doubles playlist. Sound off, Spartans!

Big Team SWAT will be around until February 3rd when Team DLC will move into the featured playlist slot. We'll have more on the specifics of that update next week, but this week, we've got a brand new Community Choice Poll. In this poll, you have the opportunity to select which new game type you'd like to see in the Team Doubles playlist. Sound off, Spartans!

Keep the ball away from the other team! Once again, knowing when to run the objective or pause to neutralize your opponents is often the difference between not only map and game control, but also a win and a loss.

Quickly moving hills provide fast paced gameplay that gives each team an opportunity to retake control of each hill and map.

New : To vote, just select your choice below in the embedded poll!

Voting will be open for approximately four days. Check back next week to see which game type reigns supreme!

Last month, we previewed and showcased the first issue of Halo: Escalation, the first serialized Halo comic published by Dark Horse Comics which spins directly out of the events of Halo 4. The second installment is now available, and in this issue, Sarah Palmer fights to get the Arbiter and the Brute Ambassador to safety, while Captain Lasky sneaks behind enemy lines to reestablish communications with the UNSC Infinity. Their plans for escape are jeopardized, however, by a turncoat in their midst.

To learn more and read the first six pages of Halo: Escalation #2, head here. Alternatively, if you'd like more information on the first issue, head to the 12.4 Halo Bulletin, where you'll find the introduction to the series, exclusive mobile wallpapers, and more. 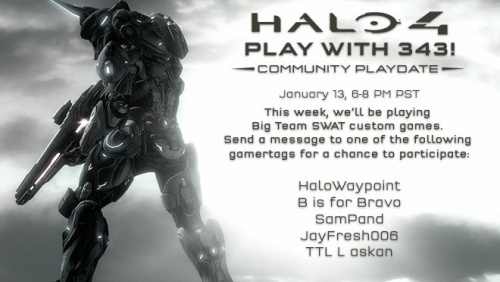 I think I speak for the entire team when I say we're (always) itching to play Halo, so we're particularly excited about this coming Monday. From 6-8pm PT, we'll be hopping on Xbox Live and running some Big Team SWAT matches in custom games. Frankie has a thing for headshots, so he'll be joining us for this week's playdate as well.

We'll be inviting community members at random, so just send an Xbox Live text message to one of the gamertags below on Monday:

We'll be mixing up teams and players regularly, so if you don't receive a response or invite right away, don't fret. We are super excited to play with you, and can't wait to for the action to begin on Monday. See you then!

In the first community interview of 2014, I had the pleasure of catching up with legendary Forger petetheduck. Perhaps most known for his video series Forge with Pete, which premiered on Halo Waypoint two years ago, pete has worked on a multitude of projects since the first iteration of Forge. Read on for some insight into what he loves about Forge, and even some info about his new Action Sack game types which are being considered for Halo 4 Matchmaking!

Hey, petetheduck! Thanks for sitting down with me today. For those who haven't yet seen your videos, tell us a little bit about yourself!

Hey, Bravo! These chairs are amazing. Let's see, I'm petetheduck, and I like Forge. It's not just that I like to Forge, but I'm also a huge proponent of the tool itself--I think Forge plays a pivotal role in each Halo game; from creating traditional multiplayer maps for enhancing the matchmaking portfolio to using Halo as a platform for atypical custom game experiences like Speedrun, Forge is a source of infinite content and can even be an enjoyable activity in and of itself. 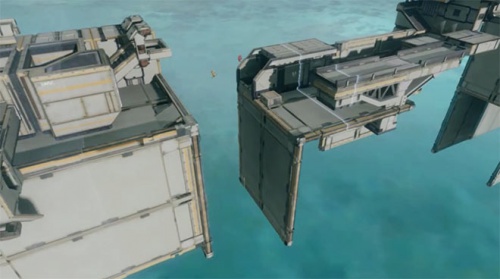 I've been involved in the online Halo community since 2002, primarily at Halo.Bungie.Org. I started to create Forge-focused videos in 2012 and it has been great to be able to share Forge with Pete with the Halo community through Halo Waypoint. Forge with Pete is a video series I use to share some of my more elaborate Forge creations, with an emphasis on how they were built. That's an underlying theme to most of the content I create--trying to be informative and helpful. I want people to know how my creations work so if they're inspired by them, they know how to build something similar themselves.

How did you start Forging? What were some of your first projects?

I fiddled around with Forge when Halo 3 launched but I didn't really get into it until the Foundry DLC was released--that was the moment when Forge went from a map tweaker to a real map creator. I like Halo and I like creating things, so Forge was a natural fit for me. I've always been drawn to the more unusual uses for Forge, so I started out creating Infection maps. They were all pretty awful.

My first successful Forge project was the Flaming Ninja Challenge obstacle course in Halo 3. I continued to make obstacle courses throughout Halo 3 and Halo: Reach before transitioning more into custom games, the kind of things that I think are fun for 16 players to jump into in a custom game lobby and play. 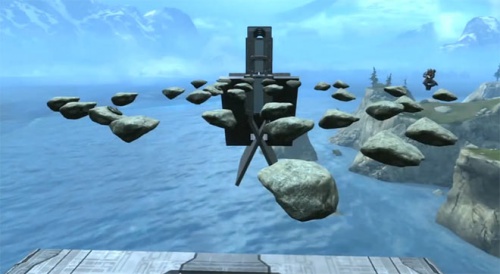 Which projects have been some of your biggest or most difficult, and why?

I think the most difficult Forge project I've completed was Guitar Halo in Halo: Reach. The challenge in building that particular map came from an interesting quirk in the game engine--the game would not spawn two objects simultaneously. I was attempting to use golf balls to imitate instrument-based rhythm gameplay (Guitar Halo--get it?), which is based on very precise timing. But because the game was spawning the golf balls in a random sequence and not simultaneously, I had to create a mechanism to compensate for the spawning system. I went through many design variations before finally finding something that worked. If you're curious how I did it, check out the episode!

I've used Forge to create other elaborate mechanisms--from Battleship to Rock-Paper-Scissors. I've always found it fun to explore the limits of what Forge is capable of, brainstorming ways to make those unexpected experiences possible. 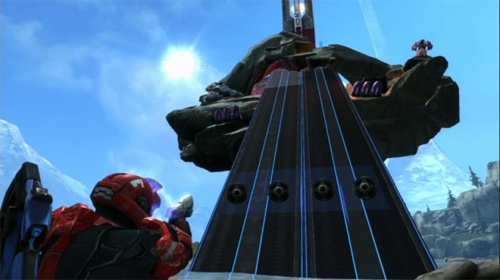 We know you've whipped up a few Action Sack game types that are being considered for Halo 4 Matchmaking. Tell us about them!

I submitted three game types for consideration in the Action Sack playlist. I'm not sure which, if any, will actually make it in, but here's the rundown on what I put forward:

Paintball : What sets Paintball apart from other instant-kill Slayer experiences like SWAT, aside from the themed map and Loadout, is the elimination-style, round-based gameplay. You'll only have one life per round, so make each Plasma Pistol shot count as you try to eliminate the other team. If Paintball makes it into Matchmaking, I'll be interested to see the community's reaction. There is a lot of potential for other experiences that use one life settings if Paintball is well received. Paintball is already a popular custom game, and I simply provided a colorful speedball-inspired arena to play it in.

Z Fighting : Z Fighting uses the Dominion game type to spice up Shotgun Slayer. The short range of the Shotgun allowed me to experiment with a minimalistic map design--a completely flat battlefield that is dynamically altered as Dominion barricades rise up from fortified bases. The lack of elevation variation makes base turrets and Auto Sentries surprisingly effective, adding an interesting twist to Z Fighting's fierce close-quarters combat.

Warthog Chase : With elements inspired by popular custom games like Warthog Derby, Warthog Chase is a love letter to our favorite Halo vehicle. Using King of the Hill, a large hill will move from Warthog to Warthog during the game. When you have the hill on your Warthog, you're trying to avoid the enemy team because if they get inside your hill's radius, they'll contest it and prevent you from earning points. The gameplay is all about chasing down the Warthog that has the hill and contesting it, or attempting to knock it completely off of the map.

Any advice to aspiring Forgers out there who would like to see their creations in Matchmaking?

Get involved in a Forge community. Feedback is critical to improving as a Forger, but even the best maps need to be seen--and Forge communities are a great place to share your content with others.

I also know you're quite busy with work these days. Any future Forge projects that you'd like to tackle next in Halo 4?

Work! Yes, and the little ducklings. They keep me busy. Action Sack has a lot of potential and I would enjoy focusing on that style of gameplay more in the future. I don't have any specific plans for custom games at the moment, but with Ricochet--well, the possibilities are endless. Multi-team Ricochet is the most versatile game type there has been in a Halo game and because of it, now is definitely an exciting time to be a Forger. I also seem to have a tradition of releasing a single Rube Goldberg Machine for each Halo game..

Thanks for joining us, and hope to hear from you again soon! If people want to check out some of your videos, where should they go?

Thanks for having me! My website, petetheduck.com, is an archive of most of my projects and has links to my different channels. Right now some of my videos posted there are offline, but they'll be back soon. Quack quack!

Next up, bs angel is back with her favorite screenshots from the past year!

With another year come and gone, it seemed like the perfect opportunity to shine the spotlight on what was. So without further ado, we proudly present the screenshots that were, in our humble opinion, representative of the best of 2013!

For your chance at being in the next spotlight, take a screenshot that features a Deadeye helmet, and then tag it with "Deadeye" and "Halo Waypoint", and maybe, just maybe, yours will be featured in the next Halo Bulletin

And with that this week's bulletin comes to a close. Until next time,