Normally, people are not allowed to have friends visit them regularly at work. Luckily though, over the past few weeks, several of our friends have been visiting the studio. At first I thought this was strangely awesome - tons of Halo players visiting the studio to hang out with me. Slowly, however, I have realized that it's much more likely that everyone just wants to get their hands on the 4-shot Battle Rifle and new weapon tuning. This is based on the fact that most guests generally walk past my welcoming outstretched hand and straight into our Multiplayer playlab.

Last week, professional Halo player and good friend, Coby Yamauchi, came by the studio to hang out. (It is worth mentioning that he actually did stop to say hello before he plugged in his controller.) Coby joined us in testing some of the new weapon tuning, as well as new (wacky) game modes. We also hung out with multiplayer designers and other 343 team members to talk multiplayer level design and even have a look into some of the complex systems used by the test team to break down multiplayer gameplay, maps and films.

I had a chance to chat with Coby about his visit, and specifically (you guessed it) his thoughts on the weapon tuning.

Hey Coby! Thanks for coming by the studio. As a Halo player who has actively been competing in various leagues such as Arena Gaming (AGL) and BigTeamBattle.net, what were your initial thoughts on the current weapon balance testing?

Battle Riffle - 5 to 4 shot is way cool and really needed! I liked having the chance to play the new 4-shot setting - it felt more like the traditional Halo 2/3. It felt totally right. I think it will help reduce NOT being able to challenge then bail out of battles or getting into dumb situations and being able to escape. 4 shots (headshots) make you commit to a battle and play smarter in my opinion. For the casual player, you probably would not notice a big difference but to the advanced competitive player, it brings back the Halo 2/3 skillset.

DMR - The reduction in the reticle so it's more difficult for long distance shots was a great idea, certainly eliminating easy 5-shot kills from across the map! The DMR is currently very popular, but with the proposed change would make the Battle Rifle more even with the DMR.

The reduction of the magnetism on automatic guns, including the Assault Rifle, adds more skill to short-range fights. I think this is a much needed change for competitive players, requiring more skill in close-range battles - you actually have to aim and pay attention like it should be!

Increased rate of fire with the LightRifle when scoped is cool - it would provide a better fight against a DMR in mid and long-range battles. I never thought of using the LightRifle until playing the new proposed update.

I noticed you didn't really put the Battle Rifle down. We discussed that you've been using the BR in both Matchmaking and tournaments, so what are your thoughts on the weapon's new behavior?

In tournament play, I am pretty good with the Battle Rifle so even though the proposed weapon updates are a good idea, I think I will stick with the BR as my primary weapon of choice! I will certainly use and experiment with the weapons after the new changes are released and practice with them before my next tournament. 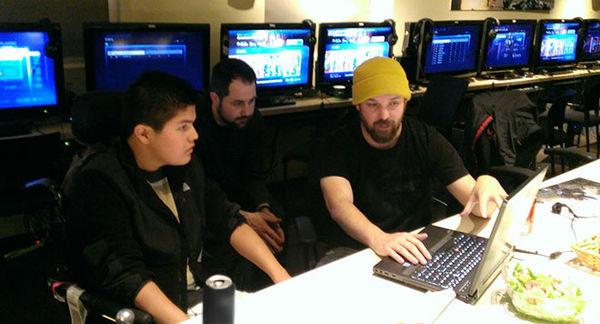 We talked a bit about the power of the automatics, and there were several times where they were quite deadly on maps like Skyline. How did you feel about their damage, auto-aim, etc?

The Assault Rifle in a close-range battle against a DMR or BR appears to have slight damage advantage. I don't know if there is any technical truth to it but it feels that way on maps like Adrift. I'd possibly like to see a reduction to the damage or a change to the auto-aim on the Assault Rifle.

How are you expecting the updated weapon tuning to affect tournaments such as Arena Gaming, BigTeamBattle.net, and others?

I feel it would be a big benefit to tournament play. Halo competitive play was so big with Halo 2 and Halo 3. I believe the weapons tuning will help move Halo back into the direction of the competitive success of the earlier versions of Halo.

Thanks for coming by the studio, Coby, and best of luck in tournaments for the rest of the year! 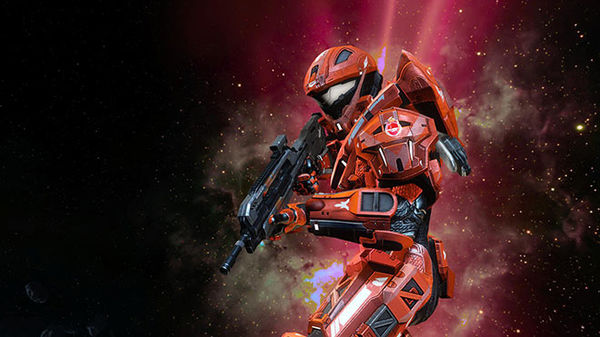 If you look closely at the above screenshot, you can tell that that BR is probably a 4-shot BR. No, not really, but I think we can both agree that it looks pretty sweet. Good work, Mr Farenhiet. Now let's talk weapon tuning.

After reviewing community feedback from past weeks, we felt it was necessary to clarify that the red reticle range (RRR) of the DMR has been reduced, and the RRR of the LightRifle has been increased to match this new range exactly (Note: this is different from reducing the DMR to the LightRifle's original range). What we've found in current testing is that the LightRifle is now a favorite weapon for long-range engagements, and in terms of kill time, a zoomed LightRifle currently outclasses the DMR. This has created a dynamic that allows the DMR to excel in a very specific range and role - at equal skill levels, LightRifle users will punish the DMR at range, and Battle Rifle and Carbine users will have an advantage at close range.

Also, our latest tests have included a slight damage bump to the Magnum - while it is still the same amount of shots to kill (6), the slight increase will make it more valuable as a secondary weapon, particularly in team play when "team shooting" (firing at the same opponents with your teammates). In Quinn's words, "The Magnum feels good. It just feels really good." Quinn gets kind of weird when he talks about weapons. [bs angel note: And even when he's not.]

Last week, we announced that we'd be bringing a select group of community members into the studio to check out the new weapon balancing. We recently reached out to a handful of invaluable individuals who we feel not only have an extraordinary understanding of the game but also work hard to make the Halo community a better place each and every day. If you received an email, we look forward to seeing you soon. If you didn't, fret not, because you'll have several opportunities to give us your feedback - via a live stream, Bulletin threads, forums, and of course once the changes hit Matchmaking being a few such instances. While we wish we could have invited each and every one of you, our playlab only holds so many. Plus, we're running low on beer (you can blame Frankie for that). When these community members are in town, we'll be live streaming gameplay, as well as discussing the challenges and strategy behind the changes with the design team. More details about this event will be announced shortly.

Additionally, to kick off the new weapon tuning update, June 3rd will also be host to an Xbox LIVE playdate with 343 team members, in which we'll be hopping into a few playlists and playing with the community. If you're currently dreaming of a 4-shot BR duel with bs angel, mark your calendars. Careful - she's been known to "straight up" out-BR unsuspecting victims.

This coming Monday, an encore of Spartan Ops Episode 6 will be available in Matchmaking. One of the things we'll be doing in our next Matchmaking Update, which will take place on May 20th, will be showcasing some of our favorite Forge Island creations in a limited time only Community Forge Island playlist. If you'd like to submit your creations (or those of a friend) for consideration, be sure to post in the Community Cartographer's Thread in the proper format. During the remainder of this week and over the weekend, the Matchmaking Systems Team will be working alongside the Community Cartographers to select the final candidates, which will be announced in next week's Bulletin, along with the full details of the next Matchmaking Playlist Update.

This week, I started to select some screenshots for the screenshot spotlight, but then bs angel walked over and unplugged my computer. That being said, she's got your screenshot fix covered.

Last week we shined the spotlight on Daybreak. This week, in honor of the upcoming weapon tune, we decided to go with the Battle Rifle. Take a gander at the following images of a weapon known for its powerful three-round burst, and then capture your own for your shot at being featured in next week's Bulletin.

For your chance at being in the next spotlight, take a screenshot that features an EVA helmet. Then tag it with "EVA" and "Halo Waypoint", and maybe, just maybe, yours will be featured in the next Halo Bulletin!

This brings this week's update to a close. If there's nothing to read next week, it's because I've been playtesting Forge Island maps for the past 6 days and forgot about any and all responsibility that I may have had.