It was a slugfest.

A few years ago—before I hated absolutely everything—I loved gardening. Maybe it was the joy of watching a simple seed blossom into a statuesque sunflower. Perhaps it was the smell of the moist dirt and the way it cascaded through my slightly spread fingers. Or it could have been the feel of the omnipresent sun, simultaneously warming my face while gently coaxing my eyes into a semi-closed state. But regardless of the reason, I used to find the act of cultivating plants enjoyable. One particularly horrifying experience changed that, though. Let me explain.

It was a chilly summer evening when I found myself exiting the back door and walking briskly toward the garden. A favorite plant of mine—one with a strong stalk that typically elevated itself above its neighbors—was perched precariously on its side, struggling to stay upright but failing miserably. The sun had already set, and a cool blanket of darkness was spreading its way across the yard. I approached the plant, quickly put it in an upright position, and settled its roots back into the proper spot. Light had already fled the area, so I blindly manipulated the loose earth, pushing around the plant’s base in an effort to give it a solid foundation. It was during one of those firm two-fingered pokes that my hand didn’t touch soil but instead made contact with something that only be described as slimy and soft yet strangely unyielding. Oh yes, I had touched a slug. Not just touched, but pushed so hard that the shell-less mollusk undoubtedly thought I was attempting to impale him with my phalanges. After letting out a blood-curdling scream, I raced inside and began a marathon hand washing session. Four bars of soap later, and the traumatizing, slug-touching experience was still as traumatic as ever. Considering three years have passed and it’s still in the forefront of my memory bank, I think it’s safe to say I officially lost that slugfest.

It’s because of that incident (and also a general distaste for being covered with a thick film of dirt-encrusted sweat) that I no longer work in the yard. And it’s because of that lack of perspiration-causing, foliage-related festivities that I’m super excited to have a tree in Timberland’s Forge palette. I get to play around with wood without the risk of smelling and running into uninvited gastropods? Yes, please! But I’m getting ahead of myself. Let’s tackle the basics first. 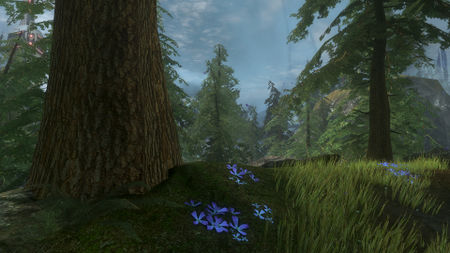 It’s a land full of timber.

In case you’re not familiar with this particular playspace, Timberland—a multiplayer level from Halo PC—is (wait for it…) a land full of timber. And that distinctively alpine feel plays a large part in why it reminds those who traverse its rugged terrain of Halo: Combat Evolved. That, along with the fact that it’s well suited for vehicular combat while also being a fan favorite, makes it an excellent addition to Halo: Anniversary.

The reimagining, which has been dubbed Ridgeline, is a mysterious tree-covered valley, complete with rolling hills, babbling brooks, and myriad paths that are perfect for both approaching and escaping vehicles. One of the many battlefields on Alpha Halo, this idyllic cliffside once served as a staging ground for human forces during their time on Installation 04. A Covenant assault did eventually bring the marines here to a tragic end, though. Here’s hoping you have a bit of a happier ending…

Although it’s already been said, it certainly bears repeating: the first things that will jump out at you, figuratively of course, are the trees, one of which is included in the accompanying Forge palette. While we added more foliage relevant for the ecosystem (redwoods, oaks, etc), we had to be careful to not place trees in the areas where you drove in the original. The same goes with rocks and bushes. So, while there is more of that nature-type stuff, your driving patterns were left primarily intact.

There’s also a whack-a-mole-type thing happening, as in order to quickly navigate spaces you have to pop up over hills. This map is a bit quirky in that regard. There are reduced lines of sight but the space still manages to maintain an open feel. When traversing with an objective, you’ll often find yourself faced with two choices: the slow way or going up over hill. Kill or be killed. Whack or be whacked. Ding or be donged. (I can do this all day, people. Just thought you should know.)

The next thing you’ll likely notice is the skybox. We wanted this to be a living, breathing environment, so we updated the planet, Threshold, the Forerunner structure, the cities, the waterfalls, the Halo ring itself, and even the birds flying across the expanse. There are also some cool atmospheric effects such as fog, rolling clouds, and patches of mist in the mountains and canyon. My favorite part of the map is a flower-dotted hillside where purple petals go wherever the wind takes them. I wanted to name that area “In Bloom,” but apparently my coworkers don’t appreciate Nirvana-esque, TU-related jokes. And we’re even in Seattle. JEEZ.

Anyway, where you look out and see Red Base and Blue Base, the canyon opens up. You can fall over the cliff now but it gives you more orientation, so, unless your name is Thelma or Louise, you’re less likely to do that. Along with the regular bases are also small watchtowers, which provide an excellent perch for those with sniping sensibilities. We wanted to give the map a feel that some of the structures are overgrown and that the buildings are actually integrated into the environment. One example of that is if you go up into Blue Base, you can see vines and foliage starting to grow into the structure.

Before I start talking about slugs again, or mention, for the millionth time, that a tree is part of the special Forge palette for this map, I should probably show you some pictures. You know what they say. 1,000 words and all that. 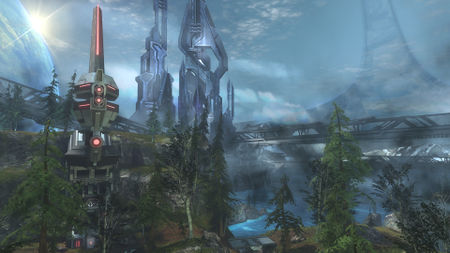 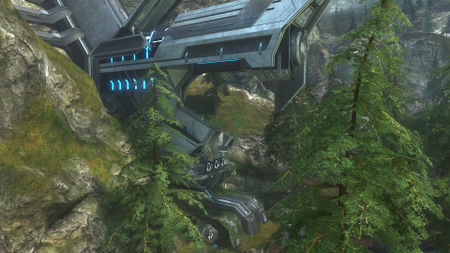 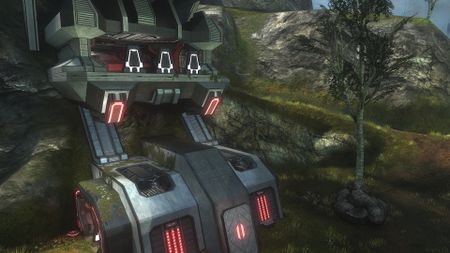 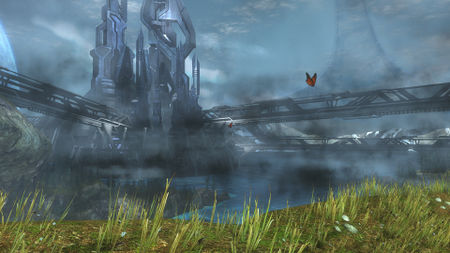 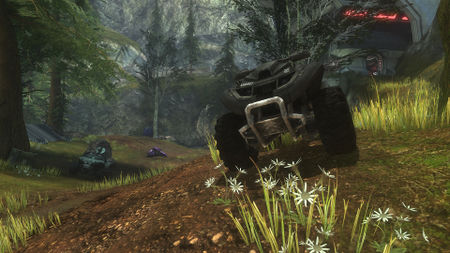 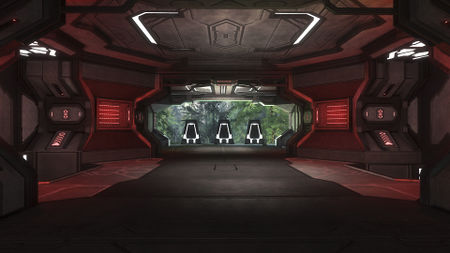 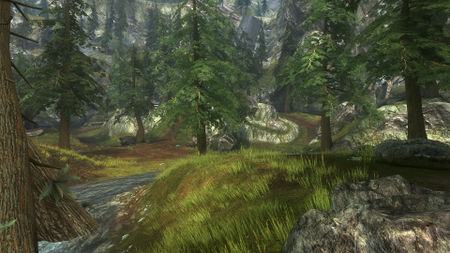 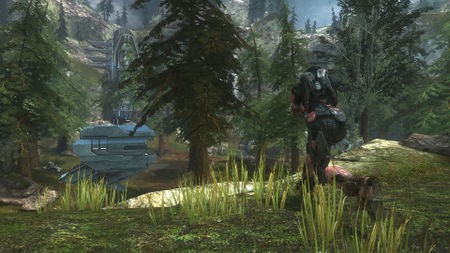 I hope you enjoyed your tour of Ridgeline. Do come back next week when we’ll be discussing a person jailed for crime! Unless I come up with a cool story about snails. Then you can count on multiple paragraphs about that.

So, if you played Reach last night or this morning, you were probably prompted to download the Title Update. I know you remembered what we talked about last week though, and thought to yourself, "I won’t see any perceptible changes in Halo: Reach Matchmaking immediately after the download." Well, there is an exception: now you can play Co-Op Campaign and Firefight without requiring a HDD. After downloading the TU, this is possible in both your own lobby over LIVE or via system link, and on October 4th through Matchmaking. October 4th is also the same day that the beta matchmaking playlist goes live. To tide you over until then, a custom gametype will soon be available on the Halo Waypoint File Share. And by soon, I mean NAO.

Please enjoy the sample TU gametype, but be aware that it is not representative of the final Matchmaking implementation. You may find a few discrepancies in this one-off gametype, but hey, that’s why it’s a beta. We will be looking at data from custom games, Matchmaking and voting for the next few months, so pardon our dust. One more difficult issue is that the very rare Halo: Reach “Preview Disc” (a tiny amount of these discs were given to certain community members and it has nothing to do with either Games on Demand versions or normal retail discs) cannot be updated with a conventional TU. 343 is hard at work trying to come up with a solution for that small, but understandably vocal group of people.

These streets, and this game, will make you feel brand new.

New York Comic Con, the East Coast's biggest and most exciting popular culture convention, takes place October 13-16. Halo: Anniversary will be on the floor, and we’ll also be hosting a panel. Details are a little sparse at the moment, and, as always, subject to change, but here’s the panel blurb should you happen to find yourself in the right place at the right time:

In just 30(ish) measly days, Halo turns ten years old! Join Dan Ayoub, Kevin Grace, bs angel, and others from 343 Industries discussing where Halo has been and where it is going.

Now, in place of questions this week, I come bearing a gift. There’s a piece of artwork appearing in the October 2011 issue of Xbox Magazine, and I asked our super awesome artist to make it into a wallpaper. Please choose the size of your liking, set it as your desktop image, and enjoy. 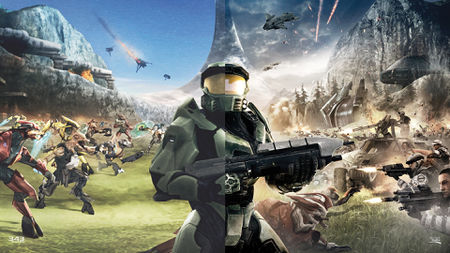 PS: And just because I’m hoping to make your brain explode from the onslaught of amazing images, here’s one more in the form of our usual Friday Caption Fun picture. Take a gander, and then hop on into the quip-focused festivities!