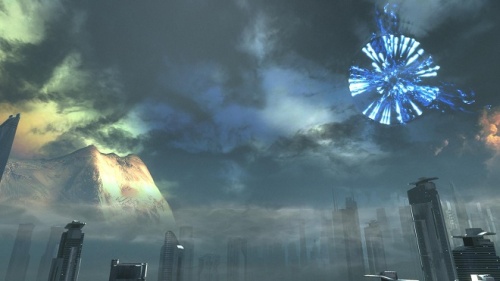 Wednesday was an important day in the United States, as we celebrated our nation’s independence by grilling massive amounts of meat, basking in the sun, and blowing stuff up (Please note I initially used a word other than “stuff” in the previous sentence but was told my linguistic selection was not nice or appropriate. Considering I am neither of those things, you would think it would have been okay).

Anyway, many people in this country plan vacations around the Fourth of July, so it was suggested to me that we skip publishing the Bulletin this week. The thought was that very few people would be around to read it, so we should save the news for a later date. I said, “Forget that. I gots stuff to talk about.” Except I didn’t say “forget.” Nor did I say “stuff.”

The compromise reached was that I would publish the Bulletin today, when hopefully the majority of our country’s Halo Waypoint-frequenting citizens have aroused from their barbeque and firework-induced slumber. So, if you’re not up, whether you reside in our neck of the woods or not, get up, because shiznit’s about to get real.

Oops. I didn’t just say that. 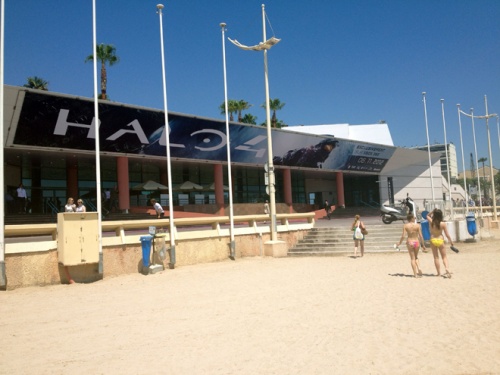 Since we are a little over four months to launch, there are a million moving parts around the studio right now. We just finished recording something in LA, which is currently titled, ”Halo 4 Theme - Temp Name.” Pretty catchy, eh? We also had a few people in Cannes, France, attending the Interactive and Digital Entertainment Festival - a retail-only event where buyers go to see the latest games. Translations were translated, presentations were presented, and demos were demoed. Beaches were not beached, though, as time did not allow for that. Unfortunately, sometimes priorities make getting a tan challenging. Those of you at RTX will see the proof of that this weekend.

Speaking of which, RTX is tomorrow. We spent the last few weeks working on the panel, putting it together piece-by-piece, making sure every last part was in picture-perfect position. The final section just snapped into place, and we’re hoping you’ll be pleased with what we created. I guess we’ll find out soon enough.

Now, before I dip into the meat of this week’s Bulletin, let’s rewind for a minute. At E3, we invited some of the world's top MLG players to come to a special event to try Halo 4's Infinity Multiplayer for the first time. Players went head-to-head with two new game modes, Infinity Slayer and Regicide, across three different maps. Check out this brand new video to hear their impressions, and then let’s take a deep-dive into Infinity Slayer. 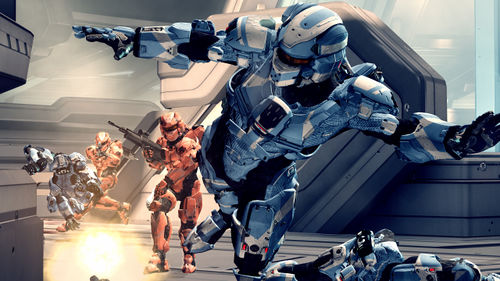 Team Slayer has always been the most popular mode in Halo, so when we sat down to build the Halo 4 competitive multiplayer experience, we asked ourselves several questions: How do you improve upon Team Slayer, especially after so many iterations? How do you reward players without upsetting the delicate balance and gameplay loop? How do you make it feel different but comfortable at the same time?

The answer to all of those questions comes in the form of Infinity Slayer.

Infinity Slayer is Halo 4’s all-new Team Slayer experience. It is an additional-but-vital mode, with new weapons, vehicles, loadouts and Armor Abilities. The UNSC Infinity takes a large role in this mode, providing players in the game with weapons and ordnance.

For the first time in Halo, you earn points not only for your team, but also for yourself. It still takes a certain amount of kills to win the game (currently one kill equals ten points, and 60 kills wins the game), but now you have your own personal progression loop on top of that.

Halo 4 also brings new medals and rewards to the experience, rewarding players not only for kills, but also style, assists, team support, and objective gameplay. Some of the things that count as “style” are killing an opponent attempting to hijack or skyjack a vehicle, ending an opponent’s killing spree, and killing an opponent that stole your ordnance.

Halo 4 features the new scoring system in all modes, but it makes its biggest impact in Infinity Slayer as players earn ordnance rewards from the UNSC Infinity. 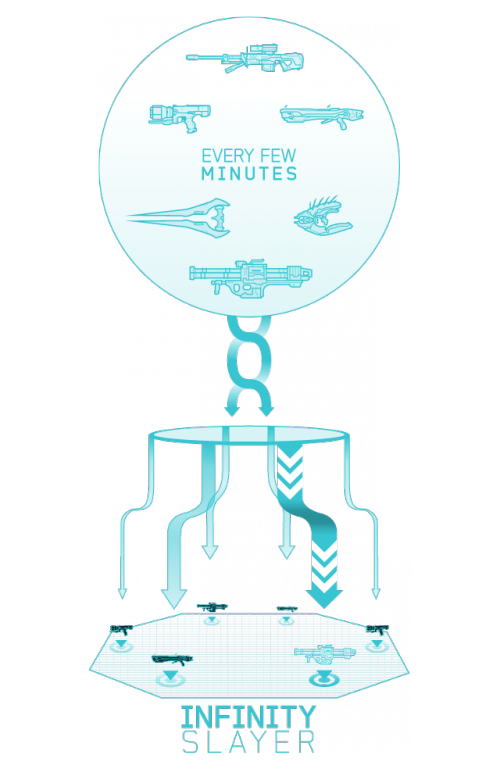 Infinity Ordnance - During each Infinity Slayer experience, the UNSC Infinity drops ordnance at the start of the match. So, what used to be a shotgun leaning against the wall in previous Halos is now dropped from Infinity. At carefully-tuned intervals, Infinity resupplies the map with power weapons.

The distance at which you can see these weapons is tuned by map. The more lethal weapons (Rocket Launcher, Scattershot, and Sniper Rifle, for instance) are always on your screen. Mid-tier weapons and grenades are not.

After initial ordnance, the Infinity drops semi-randomized weapons within very specialized constraints, set up specifically by playlist and map settings. These drops occur every few minutes. When Infinity is ready to drop a weapon, it looks at all pre-determined, designer-scripted locations, and then selects one.

You will be able to customize Infinity ordnance in Forge. 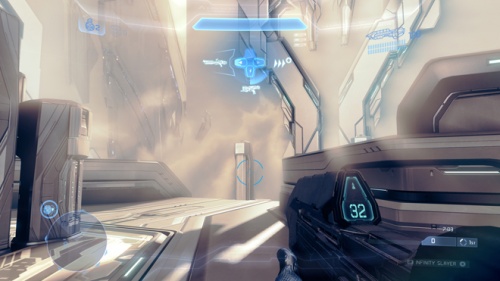 Personal Ordnance - As you earn medals, you fill up your ordnance meter. When that meter is full, you earn a reward drop for yourself from the Infinity. The reward comes in the form of three randomized power weapons, grenades, or powerups (two of the former, one of the latter). You can then choose which one you want, and the Infinity will drop the ordnance (if you’re inside, it will teleport in). You won’t get the highest tier power weapons (e.g., rockets) in personal ordnance, but everything you do get is powerfully awesome. And awesomely powerful. And everything in between.

We are still fine-tuning the system but in its current iteration, each successive ordnance takes 30% more to get. On average, each player gets 1-2 ordnance per game. Solid playing may net you three; however, I’ve been unable to confirm. For obvious reasons. 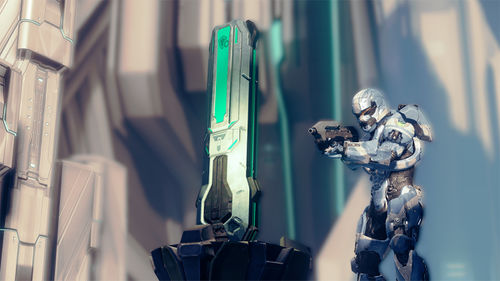 Powerups are one of the biggest new impact features, and there will be three powerup selections available in Infinity Slayer. Overshield is making a return along with two new additions: Damage Boost and Speed Boost. Powerups are different colors, both on your screen and your character. Overshield is green, Speed Boost is blue (and leaves trails), and Damage Boost is red.

Powerups have a limited duration but are incredibly fun and combo well with the new weapons and Armor Abilities in Halo 4. For instance, the Energy Sword pairs well with the Overshield. Or, if you have a Magnum, selecting the Speed Boost is beneficial so you can quickly reach a power weapon. There are numerous on-the-fly choices and combinations to discover.

Some additional features of Infinity Slayer are perspective scripting and dynamic music, but you’ll hear more about those things later. For now, it’s time to move on to Halo: Reach. 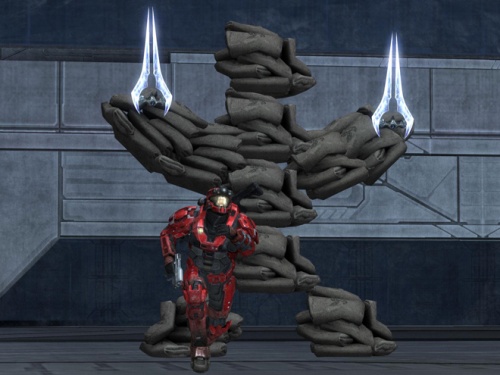 In one way or another, every single person in the studio is working on Halo 4 right now. As we get closer to launch, the teams that split their time between that game and Reach find their priorities slowly shifting. Because we’re so heads-down right now, working on kicking out the monster that is Halo 4, we are not able to release a Halo: Reach matchmaking update for July.

We are well aware, almost painfully so, that the playlists need to be consolidated and the overall matchmaking experience needs to be streamlined. We’re planning on doing that in August, although, as you recently found out, things can change. Just know that we’re aware it is needed and coming; it’s just a matter of when.

Custom Challenge of the Week 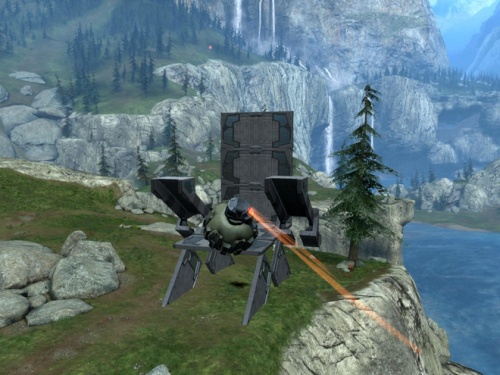 The Grenade Launcher is often referred to as the pro-pipe. I’m not exactly sure why (though I’m guessing it’s because it’s similar to a pipe. And it’s pro). Regardless, if you like this oddly-nicknamed weapon, you’re in luck because this week’s Custom Challenge of the Week features everybody’s favorite explosive discharger.

From now until next Tuesday at 11:59 p.m. Pacific Time, setting up a Custom Challenge with the Grenade Launcher M319 IGL as the type of weapon will result in 7.5 times the usual multiplier. So go pipe some pros! Or do whatever it is you do with that particular weapon. 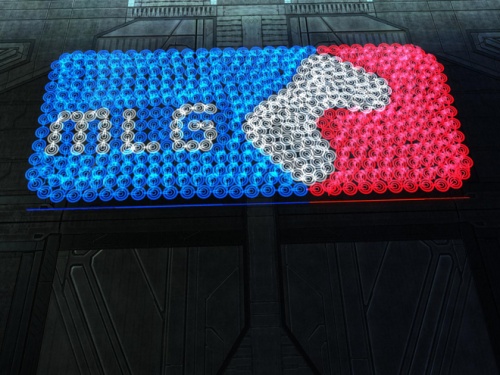 Yet another summer weekend is almost here, and to celebrate this one, we have selected the MLG playlist to house the Super Jackpot Weekend festivities. Starting today and ending on Sunday, hopping into that playlist will present you with the chance of receiving a 32,000-credit bonus. Zero bloom and extra credits? Sure, why not!

And that, my friends, wraps up yet another edition of your weekly Halo Bulletin. Some of you I’ll see in Austin, where we’ll get to experience the 108 degree weather together. Fret not, though, because if I find prescription strength deodorant, everything will be okay. Wish me (and your nose) luck. 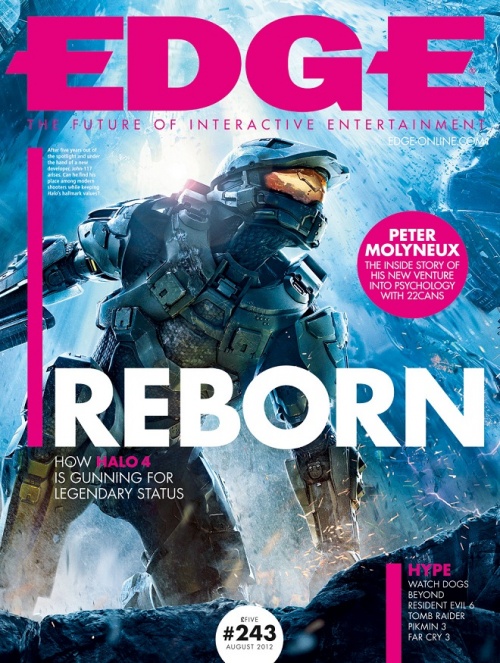 P.S. If you still feel like reading after that vicious onslaught of words, we heard that Halo 4 is on the first ever EDGE iPad edition. Apparently it's even half-price for a limited time. So go read even more!