As I’ve written before, holidays are pretty fantastic at 343. Sometimes we have unlimited amounts of Lucky Charms, other times we get custom Halo valentines. Most times, there is a lot of delicious homemade food. This past Tuesday was Earth Day, and as you may have guessed, it was a pretty big deal here at 343. Sitting on each desk on Tuesday morning was a little surprise in the form of a custom-made trading card. It is worth noting here that the cards were made from 100% recycled paper.

The franchise team put together a collection of eight trading cards, each featuring a planet from the Halo universe, and gave each employee a random card. This made everyone excited, and also made some people want all of the cards. I may or may not be one of those people. The planet I received was Earth – good place to start, I thought. I quickly looked around at neighboring desks to see which cards my co-workers had received, and immediately stared going through my inventory of Halo figures, dogtags, and other trinkets for items to barter with. Others were a bit more direct, and started negotiating trades on an email chain with the entire studio. This is when I knew things were gonna get serious. 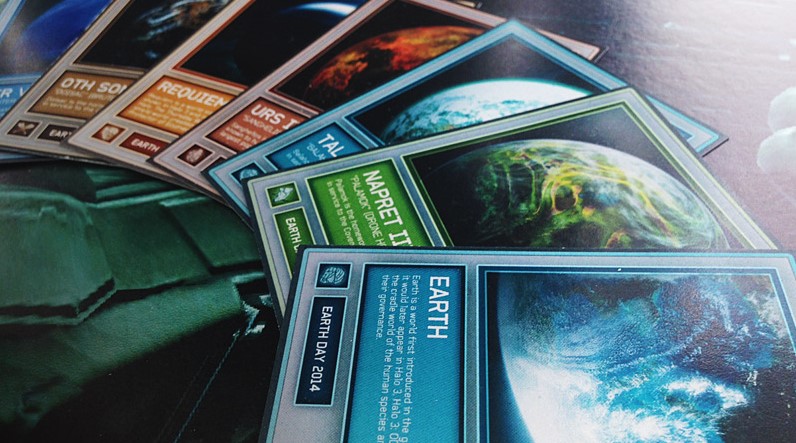 By the end of the day, I had traded a set of Halo 4 Infinity dog tags for Sanghelios (URS IV), and was lucky enough to nab a Te (SVIR V) in exchange for a future favor. I realize this may have been a questionable decision, but I really wanted the card. At the time of this writing, I am still actively searching for the remaining five Earth Day 2014 Halo trading cards. I will find them.

This week, we’ve got a new issue of Halo: Escalation, a (heavy) Halo 4 Matchmaking update, and more. Let’s chat!

As we mentioned last week, we have some new stuff coming on the Halo 4 playlist front. This weekend will be the last chance to play Ninja Assassins during this rotation, so if you’d like to grab some final screenshots or save the game type off to your hard drive, hop into Matchmaking. We’re glad to see that the playlist was so popular as it became one of Halo 4’s most popular Free-for-All playlists. Moving forward, we’ll look to create additional unique and refined experiences for featured playlists, and there may even be a spot for a Ninja Assassins style gameplay in a permanent Matchmaking playlist. Speaking of bringing back game types, we’re excited that Heavies will be returning to Halo 4 Matchmaking this coming Monday in a pretty big way.

Heavies was one of Halo 4’s most popular featured playlists. There’s something special about Spartans, heavy vehicles, and heavy weapons meeting in the middle of a wide open battlefield, and we’re not surprised that the playlist was so frequented. We’ve been listening to your feedback, and over the past week, we’ve been doing some additional game type testing to prepare the playlist for its own spot in Halo 4 Matchmaking. Additionally, we added Heavies CTF into the game type rotation. As of Monday, Heavies will have a dedicated playlist, and the Ricochet playlist will be removed as we move the Ricochet game type into existing playlists.

The following game types will be available in the playlist:

The above game types will be played on the following maps:

Multi-Team is back! The playlist features four teams of three players each, and offers a mix of game types, including Infinity Slayer, Legendary Slayer BR, Oddball, KotH, SWAT, Regicide and Ricochet. The playlist will be available for two weeks, until May 12.

Last week, we asked which game type you’d like to see in Multi-Team, and Legendary Slayer BR was the winner! The game type will offer an interesting mix of precision weapon based tactical gameplay and absolute chaos, as players from four different teams enter the fray respawn after respawn. As is always the case with Multi-Team, it’s sure to be fast paced and chock-full of multikills. To check out the game type, head into the Multi-Team playlist starting on Monday morning.

The fifth issue of Dark Horse's ongoing comic series - Halo: Escalation – released today! To learn a bit about the issue, get a sneak peek, and even snag a wallpaper for your phone, read on.

Missing for thirty years, a legendary UNSC warship is discovered deep behind enemy lines. As Infinity plans a rescue mission, however, Admiral Hood’s past with the ship’s captain threatens to jeopardize the mission. The investigation into the UNSC saboteur continues as the journalist infiltrates an Elite holy land in search of answers.

To get a sneak peek of this issue, check out pages 6-11 below!

To read the full issue, head over to the Dark Horse website.

We’ve also thrown together some mobile wallpapers based on the cover art for this issue of Halo: Escalation. We’ve outfitted them in several different sizes – download yours below, and be the envy of all of your friends. 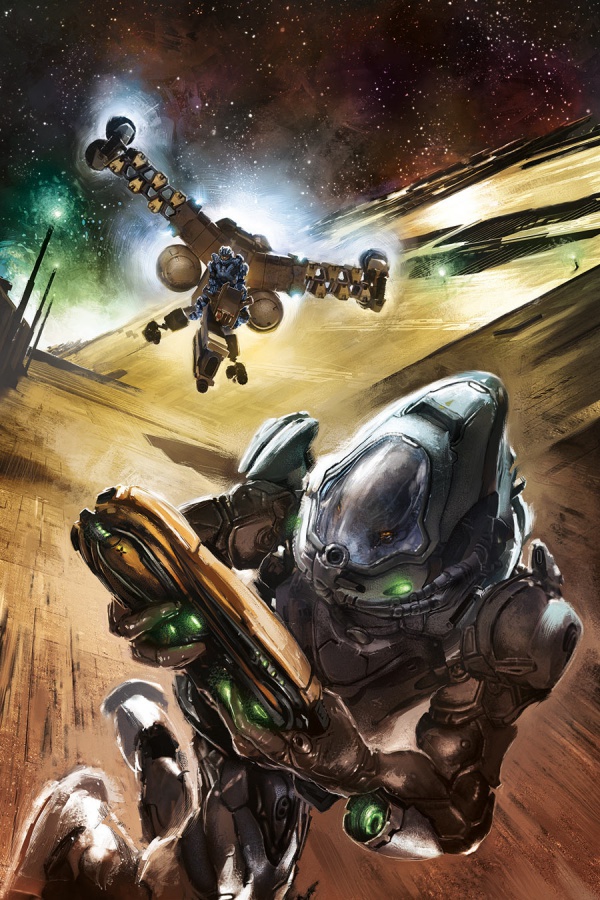 Last week, we turned the spotlight on Adrift. Take a gander at the following melee screenshots, and maybe even find inspiration to make your own.

For your chance at being in the next spotlight, hop into the Heavies playlist (or grab some friends for a custom game) and take a screenshot featuring a Wraith and then tag it with “Wraith” and “Halo Waypoint,” and maybe, just maybe, yours will be featured in the next Halo Bulletin!

And with that, this week’s Bulletin comes to a close.