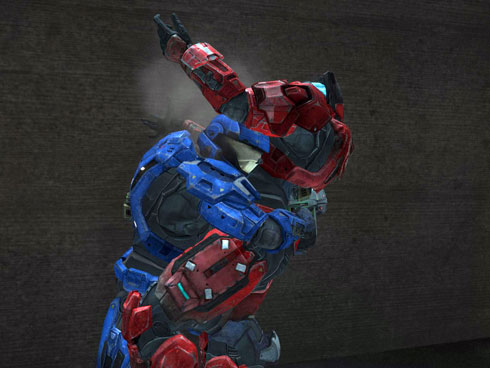 I was talking to a friend of mine the other day—enjoying the customary exchange of lighthearted pleasantries—when he carefully broached the subject of a certain smell I emitted upon our last meeting. Apparently, when I saw him at PAX East and he leaned in for an embrace, his towering height caught wind of sweat and deodorant-type odors originating from my not-so-sweetly-scented hair. He hypothesized that—due to my small stature and fondness for hugs—many an armpit had rested upon my head throughout the duration of the day, transferring the underarm-like stench to the topmost part of my body. After debating how concerned I should be about the implications of not smelling like flowers, I finally decided I should be grateful that I have an excuse for my body odor. I’ll blame that on others. Gladly!

You may be asking yourself why I’m talking about my PAX-related musky male essence. Frankly, I’m wondering that myself. It just seems appropriate though, considering the bulk of this bulletin is about events. There’s nothing quite like putting a face to a name, especially when it’s your favorite Mister Chief-drawing Scotsman, so let’s talk about some of the opportunities you’ll have to wipe your putrid pits upon others while simultaneously filling your brain with all of the Halo-related goodness it can handle. 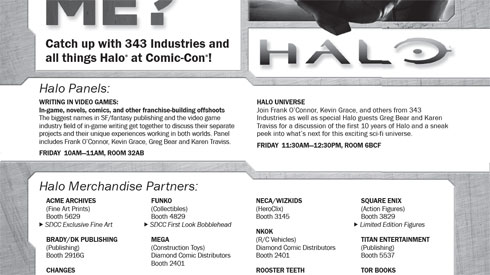 Chronological order makes the most sense, so let’s start with San Diego Comic-Con. A four-day event showcasing everything from comic books and fantasy novels to toys and science fiction video games, SDCC has it all. If you’re into pop culture, you’re sure to see something, probably slathered in body paint, which floats your boat. The festivities take place July 21st-24th, and we’ll be there, yakking it up about the Halo universe, Halo books, and perhaps even a little something else. While Halo is a pretty cool guy and doesn't afraid of anything, don't look up his sleeve. That would undoubtedly ruin the surprise. Here’s our main offering, followed by a spattering of other activities that may pique your interest.

Join Frank O’Connor, Kevin Grace, and others from 343 Industries as well as special Halo guests Greg Bear and Karen Traviss for a discussion of the first 10 years of Halo and a sneak peek into what’s next for this exciting sci-fi universe.

McFarlane Toys visionary, Todd McFarlane, will be available to autograph the Toys "R" Us San Diego Comic-Con Halo: Anniversary “Master Chief Platinum” action figure. Event is limited to 150 tickets. One autograph per person, limited to the 2011 SDCC HALO figure only.

The biggest writers in SF/fantasy publishing and the video game industry get together to discuss their separate projects and their unique experiences working in both worlds. Panel includes Frank O’Connor, Kevin Grace, Greg Bear, and Karen Traviss. 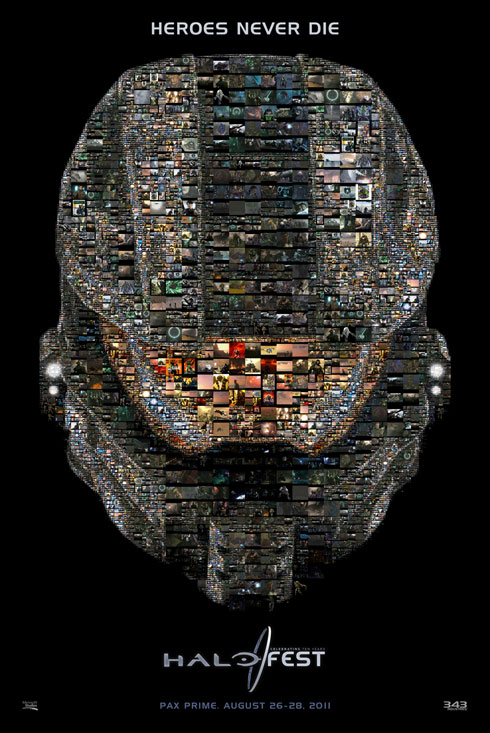 Now, I know I’ve been talking about Halo Fest a lot lately, but seriously, it’s going to be the biggest and bestest Halo bash of the year. To help get you in the mood, our hardworking artist poured his blood, sweat, and tears into the above imagery, all because he believes in the power of delicious eye candy. Well, that and I wouldn’t stop beating him. But seriously, how else was I supposed to make sure the blood and tears got added to the poster? Ensure his pain was not in vain by taking a moment to ogle his work. If you desire, you can even daydream about the possibility of it one day adorning your otherwise bare walls. Completely up to you.

Back on topic, we shared three of our Halo Fest panels last week (Halo: Anniversary, Halo Universe, and Halo 4), and a few more got finalized during the seven-day interim. Should you like Halo books, esteemed authors Karen Traviss and Greg Bear will be at Halo Fest discussing the finer points of shaping words into spellbinding stories. Should you enjoy Halo comics, up-and-coming artist Eric Nguyen and Marvel Comics writer Brian Reed will be on hand to talk about the art of bringing the Halo story to life within this particular medium. Should you fancy yourself a Red vs. Blue fan, Rooster Teeth plans on giving you a behind-the-scenes look at the hilarious work they do on a day-to-day basis. And should you prefer playthings over all else, Todd McFarlane of McFarlane Toys, Andrew Sparkes of Mega Bloks, and Jason Rey of NKOK will partake in some engaging conversation about the wonderful world of toys. 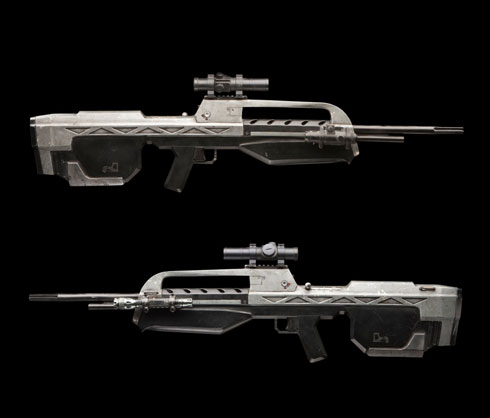 Sometimes, though, you need a break from the steady onslaught of words. I’m guessing, at this point in the bulletin, you probably know what I’m talking about. Should you reach that point at Halo Fest, I highly recommend checking out the Battle Rifle replica (and of course, the Warthog), made by the awesome folks over at Weta. This gorgeous piece of Halo history was recently up for auction, and we fought to the bitter end, not just so you could set your eyes upon it but also because we absolutely adore Child’s Play (the recipient of the proceeds). Don’t tell anybody we’re into supporting charity, though. That would ruin our hard-won reputation.

Speaking of our rep, we heard a rumor that a few of you find us to be a tad tight-lipped. Thus, I thought I’d take the time to answer some of your questions, just so I can prove you wrong. Don’t worry about thanking me. That’s just how I roll. 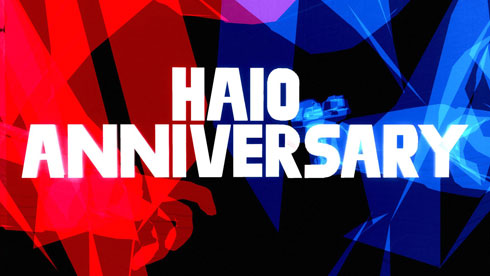 Several teams are hard at work, putting finishing touches here, polishing things there, and getting everything into an almost finished state. I got a chance to listen to some of the updated sound effects yesterday, along with a few of the songs that were recently recorded at Skywalker Ranch. As the sounds washed over me, I let my eyes close and was instantly brought back to what was, and what will be again. The songs were powerful, the sounds distinct; everything the same, yet equivocally better. It’s difficult to describe, so I’ll be sharing some audio files you can actually listen to in the near-future. I also snuck a peek at the latest build and caught a glimpse of something new that replaced one of the placeholder items. Some won’t notice the difference. Others will be excited. We’ll find out what camp you reside in when I’m able to share more. 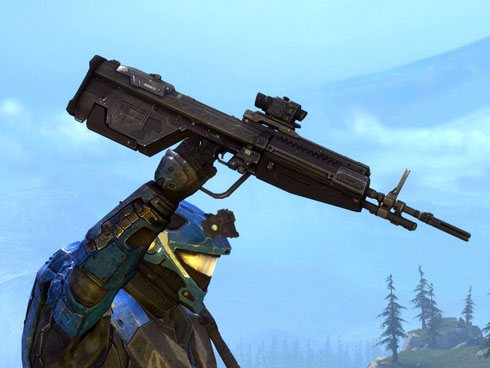 What’s up with the Halo: Reach playlists? Challenges? TU?! I need moar details!

We are so very excited to take over the day-to-day operations of Halo: Reach. However, our adventure doesn’t begin until August 2nd, so we won’t have any details before that date. We probably won’t have any details immediately after that date either, as we’ll be focusing on finding our way around the complicated maze that is the game’s backend. I can give you a solid date of when you’ll hear more about the upcoming Title Update though, and that’s at Halo Fest. Last week, we started round one of our feedback plan, and there are a few more steps where we’ll ask you to play an active role. We hope you’re willing, because we consider this a team effort. 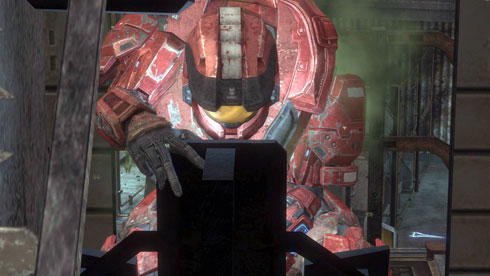 What’s up with (insert something Halo-related here)? In case you haven’t figured it out yet, I still need moar details!

We have a lot we want to share with you, and we’ll do so when the time is right. Sometimes this bulletin will include so much information that there will be a very real possibility you just may explode from the extreme dumping of details. Other times, the news will be light, and you’ll leave with the same questions you had upon your arrival. Such is the nature of the game, dear reader. But whatever each week brings, I can assure you of this: we’ll get through it. Together.

PS: I do Friday Caption Fun festivities every week, and your responses are simply too entertaining to keep to myself. Thus, I’ll be sharing the top answers every week in the form of an image, just like you see below. Feel free to join the latest quip fest, should you want to see your name in lights next week! 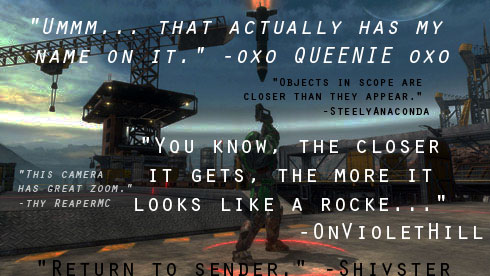