Throughout the past few months, we've seen conventions and matchmaking updates come and go, and we're now less than one week away from the Champions Bundle, and less than two weeks away from the conclusion of the Halo 4 Global Championship. We've got updates on both of these and much more in this week's update, so let's get started. 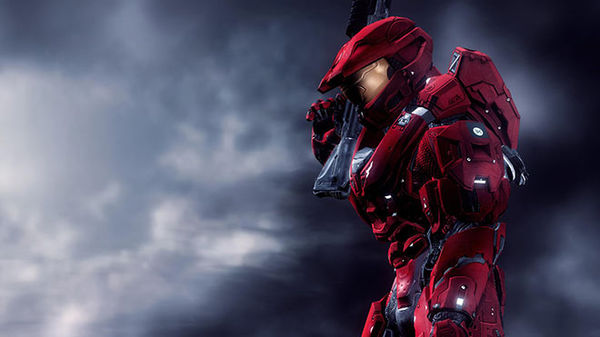 Next week will have Matchmaking updates on both Monday and Tuesday, as we will be updating the current playlists and releasing the Armor Mod Update on Monday, and deploying the Champions Bundle DLC content and playlist on Tuesday.

Next Monday, we will release two additional armor mods free of charge for you to enjoy, and we'll be using a Title Update to deliver them. These will be released one day before the Champions Bundle launches on Tuesday, and you'll immediately be able to incorporate these new Support Upgrades into your Loadouts and dominate.

Recharge decreases the time it takes for your shields to recharge.

Survivor ejects you out of a vehicle if it's about to explode.

We hope you enjoy using these complimentary Support Upgrades in your Loadouts starting next Monday. As a reminder, the Champions Bundle will include a sneak peek of the Resistor Tactical Package, which allows players to retain full mobility despite taking fire for a few short moments. This armor mod will eventually be made available to all players in Halo 4 Matchmaking free of charge.

Before we dive into how the Champions Bundle will be showcased in Halo 4 Matchmaking, we've got some other changes that are coming in Monday's update. For starters, the Global Championship online qualifier will be coming to a close, and the Rumble Pit playlist will return as the premiere FFA offering. Based on community feedback, we've also made some changes. Rumble Pit will have a total of 15 new voting options including new Slayer game types, new objective game types (King of the Hill and Oddball) and Regicide, which is being consolidated and will now exclusively be available in the Rumble Pit playlist.

The following Slayer and objective game types from the Halo 4 Global Championship playlist will be added to the Rumble Pit offerings:

While the above game types will add variety to the playlist, a Slayer game type will always be present in the first voting slot. As always, we want to know your thoughts on these game types and what else you'd like to see in Rumble Pit. Head over to the Rumble Pit Feedback Thread next week to join the conversation.

In Spartan Ops Matchmaking, we'll be offering a selection of Forerunner-themed missions:

We'll also be removing Crimson DLC in preparation for the Champions Bundle the following day. Speaking of...

I don't think any of you need a reminder, but the Halo 4 Champions Bundle releases to the world on Tuesday, August 20th! That's next week. This means that not only do we have a ton of awesome content available for download but also new Halo 4 Matchmaking experiences on the way. If you need a refresher on what's included in the Champions Bundle, head over to the 7.10 Halo Bulletin for a full breakdown. I've seen quite a few threads on the forums regarding favorite stances, armors and more, and I have to say that I speak for a good part of the 343 Community Team when I say that "We cannot wait to play Ricochet with you!" [bs angel edit: I actually can't wait to smack you in the face with the ball but same thing, right?] For those of you who are looking forward to the new game type and armor, we've thrown together a shiny new desktop background to hold you over until next Tuesday. Download it by clicking below! 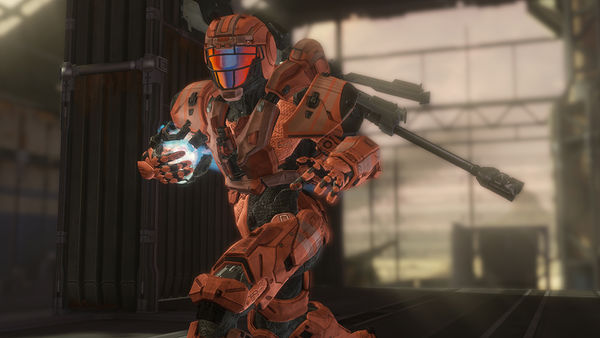 Next, let's talk about what Matchmaking will look like come next Tuesday.

The Champions Bundle will have its own playlist in Matchmaking. It will offer a varied selection of 4 vs. 4 game types and be the only place to play the brand new game type, Ricochet for the first two weeks, and new maps Pitfall and Vertigo. The map / game type offering is as follows:

We hope you enjoy this mix of game types. If you'd like to check out Ricochet and CTF gameplay on Pitfall, as well as Infinity Slayer and King of the Hill gameplay on Vertigo, be sure to check out our Ricochet and Champions Bundle tournaments from San Diego Comic-Con, which includes hours of epic in-game footage and riveting (I'm not biased at all) match commentary.

Also, watch out for Quinn and I pulling off last-minute-jet-pack-alley-oops in Ricochet on Pitfall. We've been practicing. Is that unfair? Probably. See you in the Champions Bundle DLC playlist!

We are in the fifth and final week of the Halo 4 Global Championship! This leaves just over four days of competition remaining. This week's featured game type is Legendary Rumble - to check out the settings, head over to this week's Matchmaking Update. We've seen a lot of feedback about Legendary Rumble BR and are glad to hear that many of you are enjoying the game type. If you'd like to weigh in, head over to the War Games Feedback Section. If you haven't yet tried out the game type, check it out!

As a reminder, all players who register will be rewarded with a free 'sKills' Avatar shirt, and for each week that you play 20 games in the Global Championship playlist we'll award you with 20 games of Double XP tokens. If you haven't registered yet, now is your last chance! (okay, not your last chance, but you should probably start playing now.) Let's take a look at the week 5 leaderboard. 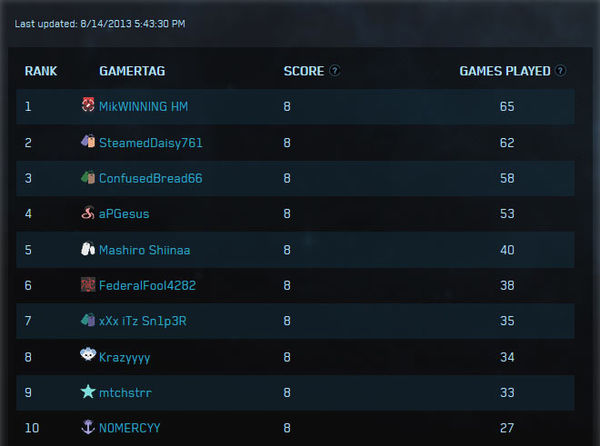 Top competitors from weeks 2, 3 and 4 should keep a close eye on their inbox, as this is how we contact players to gather the required information needed to verify eligibility. We look forward to congratulating and publishing these winners once that process has been completed. 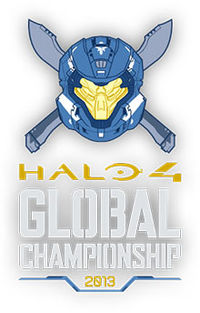 We are very excited to have many of the world's top Halo players joining us at the Halo 4 Global Championship finals event. In addition to the invites we have already announced, we'd like to recognize the accomplishments of top players from AGL 9 this past weekend in Atlanta. Additionally, we hope to work with the European Gaming League (EGL) in this initiative and that some of Europe's top talent will be able to join us at the Global Championship finals. For AGL 9, we'd like to extend invitations to the top four 4 vs. 4 teams and top 16 FFA competitors. Here is the updated list of invited players:

As we mentioned in the 7.31 Halo Bulletin, the above Halo 4 Global Championship invites that were sent to top tournament players was the first group. As a thank you for their dedication and contributions to the greater Halo universe, several well-known and competitive gaming communities have also received a specified amount of invites each, which they may distribute amongst their respective communities as they see fit - including rewarding their staff members, hosting giveaways and contests, and more. Keep an eye out for details from some of your favorite community websites and organizations.

We look forward to seeing some familiar as well as new faces at the finals. Stay tuned to Halo Waypoint for more details regarding the Halo 4 Global Championship finals tournament in the coming weeks.

Although I am developing quite an eye for screenshots, bs angel politely asked (demanded) that I once again let her pick the best shots for this week's Screenshot Spotlight. She's pretty good at picking good ones, so I said okay.

Last week, we turned the spotlight on Monitors. This week, we decided to go with the color of everybody's favorite Spartan super-soldier. Take a gander at the following images of predominantly green screenshots, and then capture your own for your shot at being featured in next week's Bulletin.

For your chance at being in the next spotlight, take a screenshot that features a Mongoose. Then tag it with "Mongoose" and "Halo Waypoint", and maybe, just maybe, yours will be featured in the next Halo Bulletin!

The next time we talk could very well be in the Champions DLC playlist. I'll be the one wearing white Mark V armor with the Menace stance, yelling about how excited I am in the pregame lobby.