It's that time of the week again. The END of the week. The part of the week where we post the Bungie Weekly Update at one of our favortie fansites. And although we hate to play favorites, we sure do like Halo.Bungie.Org, which is where this week's tale of BSPs, grass, water and Needlers will be found. If you haven't seen the updates before, check out our archive right now. And this week, we're really, really sorry about the Mister Chief "art."

Welcome mah friends, to another weekly look inside the machinery of Bungie Towers. Enjoy. Or be mildly distracted. Whichever.

Michel (who's a handsome French Canadian and a huge hit with the ladeez thanks to his combination of Gallic charm, sexy accent and excellent nationalized health care system AND the angriest 23-year old in the world) talked to me about moving BSPs today. A BSP is a Binary Separation Plane, or in other words, a great big chunk of level. The thing about a BSP is that it's all one giant piece (they can be small too) that's interconnected and joined at every seam. That means it's all rendered in one go, and can be manipulated at will – if there's enough processor power. And that's been one of the things the team has been optimizing – big moving BSPs.

The BSPs in question contain some future surprises, but a good example would be say, a drawbridge (nope, the bridge we talked about a couple of updates ago is NOT a drawbridge) with like, a tollbooth, some gun emplacements and a bouncy castle. It's one thing to draw those objects as a Static BSP – quite another to move them around. Optimizing things like that frees up more processor power for AI and other tasks, so it's important to get it done before the gameplay is tuned on those levels.

It's also a weird mix of programming and design – since in a way, a moving BSP acts more like a character or a vehicle than a building or a level. Often the various departments can just get along with polishing their bits, but in an instance like this, close-knit cooperation is a must.

Michel has also been working out the nuances of the weather system with the environment guys. Mmhmm. Weather system. It won't be a big surprise to say that there's going to be rain and snow (it is Earth after all) but weather isn't always wet and cold. One level is set in a dry climate where dust, wind and sand all play a part. Filling out the levels with weather makes a tremendous difference to how "alive" the spaces feel. The snow and swamp levels in the original game are still some of my favorite levels. Rumors of a lava and minecart level are to be ignored.

Parsons, our Studio Manager, hates making big promises (except about how he's going to crush me to death in a rat-filled refrigerator), so I won't tell you what Michel said about how much better the weather effects were this time around, I'll just say they're a "bit" better and leave it at that. To avoid the crushing.

Crack-Cananimator Nathan is pretty much happy with the dual wielding on SMGs, and not much, if anything is going to be done to those, but he's particularly pleased with the way the dual Needlers work. The gameplay subtleties that are going to be introduced as a a result of dual-wielding totally boggle my mind.

Actually, the gun models themselves look super-cool too, and tuning has progressed on the look and feel. One Covenant gun has been altered subtly to make it look better in first person mode – there were some complaints that part of the stock "looked like a shark fin" and was obstructing the view too much.

David Candland sent around a "virtual" version of the user interface for testing and feedback. It's actually a little PC app that lets you play around in the Halo 2 interface without actually playing the game. You can scroll through the various options (you can change your control setup in mid-game now! Woo-hoo!) and best of all, check out all the Live options.

Scrolling through the various Live functions – regular old Live functions - but in the Halo environment, was weirdly thrilling. I was almost literally dumbstruck just seeing a game invite icon and a Friends List in the Halo interface. The visual look and feel has been hugely overhauled, and everything is tight and together, but it still seems like Halo, straight off the bat.

It's going to be one of those days when the game ships – do I play through Campaign right away? Or do I dive right into a new multiplayer map for some rocket action? I honestly don't know which one I most want to play.

The interface is being tightened up so that it’s always easy to get where you want, from anywhere in the game. Sketch was saying this morning that it's nice we're thinking of the user interface as a part of the game, rather than an afterthought – navigating to a game choice or an option shouldn't be more annoying than playing through the Library with a depleted energy pistol.

I got a look at some new vehicle models today, including the Scorpion tank. Few things I'd love to tell you about that but can't. I can probably tell you about the new Pelican model however, and it's a doozy. It's fully bump-mapped, impeccably detailed and features a real 3D cockpit, complete with joysticks. You can't fly it of course, but it looks so much better than first time around. My favorite feature, apart from the detail added by bump-mapping everything, is the new glass shader. When you pan around the cockpit glass, it shimmers and reflects convincingly. Adding the extra depth makes it look much more like a working vehicle than in the first game. When I saw it, it was having damage applied to it, so expect to see one or two of them smashed up in Halo 2.

There's also polishing work on grass, water and other objects. One test area featured big clumps of spiny, fleshy plants – Earth plants though, and they'll be featured as decorative bits of Earth City. That test area also showed off some of the new ground and "lawn" texturing, all of which is going to be brought to life in new and interesting ways. A big reflective pond showed off some calm water with convincing transparency (based on the depth of the water) – and I've already seen an impressive wave/reflection effect for the choppier bodies of liquid.

What do I do over here, apart from observe people with actual talent and ability? Well, one of my tasks is to liaise with the UX (User Experience) group on the Halo 2 manual. And we're working on it. It'll be cool. Full of instructions! And ESRB info. Hurrah for me! But seriously, the UX group is wicked smart, and planning a manual every bit as cool as the game it describes.

Jaime, as ever, blew my mind with the usual stream of stuff we can't talk about, but he's also working on something we CAN talk about. The tutorial! Jaime liked it the first time around, but for the new game he wanted to concentrate on stuff that you need to know to play the game, instead of the usual – this is your shield, this is how you crouch – kinda stuff. The example he used was that flanking is important, so the tutorial should "force" you to learn how to flank, without interrupting the flow of gameplay or narrative. Then you'll learn and know how to apply that the next time you find yourself in a similar circumstance.

Jaime is also pleased to announce that they've beefed up both the Battle Rifle (in an unspecified way) and the Needler. The Needler will now be a gun you look for, instead of one you use as a big purple boxing glove in melee situations.

That's all for this week folks, but watch out for inclement weather, even in dry climates. 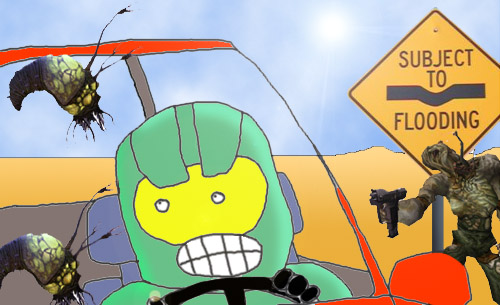