It's the end of July and you know what that means? Yeah, it's not September yet. Sorry. Not even August.

No, not the chilly, Forerunner laboratory that so many players ambled around (and to this day, still do) in Halo 2, a different sort of Lockout is a theme (or meme) here at Bungie Studios. For some, like the cinematics team, the Lockout is a breath of fresh air. Last week, the cinematics guys were here virtually non-stop, the ripe, thick smell of man and snacks coming from their remote tower laboratory. After they were locked out from the depot, all bugs, changes and suggesting have to go to Committee, which is a semi-fancy term for “dudes who prioritize what bugs get fixed.” Those dudes include various leads, Test Manager Jamie Evans (you’ll hear more from Jamie Evans on next week's episode of the world-famous Bungie Studios Podcast, [the podcast feed is now available on iTunes so go subscribe]) and Studio Manager, crusher of skulls and fierce wrassler of those who would harm Bungie, Harold Ryan.

That’s not to suggest that once you’re locked out, you aren’t here: CJ and his dudes are still here doing bug fixes, making tweaks to missions and fleshing out atmosphere throughout the Halo 3 experience, a little more on that later. Other folks have been coming upstairs to play through the game’s campaign system link in pairs, the results of these all day sessions are in earshot. The sounds of grown men giggling, yelping, howling, laughing and retelling stories echo off the cement canopy. It is kinda embarrassing listening to men squeal, but having squealed plenty myself while playing Halo 3, there’s actually no shame in squeaking.

Speaking of “not being here,” our version of the Thompson Twins, Frankie and Ske7ch are airborne this weekend, passports, handheld gaming systems, toothbrushes and Halo 3 in-hand heading to the fine nation of Amsterdam on the next stop of the Halo 3 tour. They are taking secrets untold across the pond to hopefully entertain the foreign press with antics, shenanigans and Infinite Win. It’s likely that in the near future you’ll see some of the fruits of their latest trip fall off of the Internet’s tree. These fruits should be ripe and juicy.

Joseph Staten is down at the San Diego Comic-Con, getting ready for his signing Saturday at the WizKids’ booth. He and bestselling author Eric Nylund will be autographing treats from 3:30-4:30 p.m. All week long Joseph was using one of those hand-strengtheners that you’ve probably seen on the table next to the chair your grandpa watched Hee-Haw in.

Also down at the San Diego Comic-Con, attendees will probably see a bunch of Halo 3-related awesome. Jasman Toys (makers of the above and below images) will be there showing replica weapons from Halo 3. We chatted with the kindly folks at Jasman Toys about their wares:

Q: Can you tell us a little about the faithful-to-the-game Features in the Halo 3replica weapons?

A: First off, would be the realism. The detail on these guns is amazing! We are still in development on the final pieces, so there may be some slight variation to some of the features, but the plasma rifle will have lights and recoil similar to those in the game. It will also have the real sound effects from the game as well as some of the special features including the “overheating” when shot too many times in a row. The plasma pistol will also have the lights and sounds as well as a recoil vibration when shooting and a “super shot mode” when holding down the trigger that will do more damage.

Q: How does Laser Pursuit differ from other, similar games?

A: Our Halo Laser Pursuit differs in the way that it is trying to replicate the game instead of just having your basic laser tag game. The target will represent the shields similar to the game. When you are shot the target will show the damage to your shield, if you can get away the shields will recharge back to full power.

Q: Where and when can we buy these things?

Q: Why aren’t the UNSC weapons such as the BR and AR represented here?

A: Our Halo 3 Laser Pursuit replica weapons are going to be available at toy stores and we wanted to keep the detail as realistic as possible. The human weapons look too real and would need to be made in bright orange or green to be sold at retail. Depending on the success of the alien weapons, however, who knows what could happen.

Q: A little bird tells us these aren’t precisely the correct scale – now why would that be?

A: We originally made them at the correct scale, but they were huge! The Master Chief is something like 7 feet tall and when you held the weapons at that scale they were way too big. We scaled them down slightly so that they work for an average sized adult.

Q: Where can folks see these weapons at ComiCon? 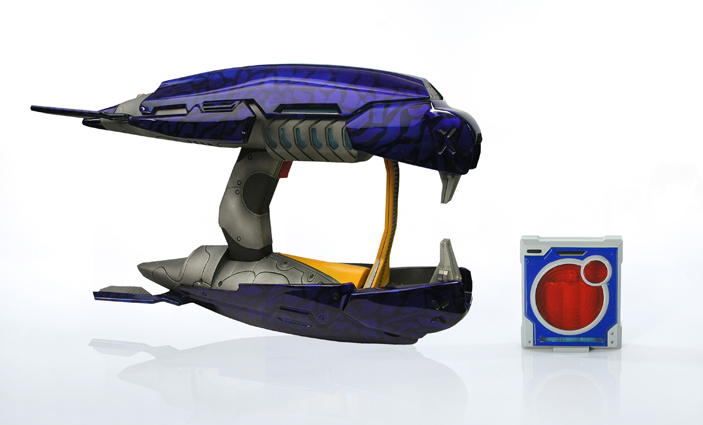 Earlier I used the phrase “fleshing out atmosphere” and promised I’d return to it. While heading downstairs to go harass various folks from the office about various things, CJ Cowan and Mission Lead Paul Bertone were sitting in a dark room. Bertone is the jerk who stood us up in the most recent podcast (he and Joseph Staten were both scheduled, but Bertone had to work on the game, instead of sit around and sip chilling, refreshing beverages) and on his screen is a bunch of debug spew that he’s studying. CJ is looking at a level in the game that pretty much forces me to do a double take everytime I look at it. The level itself is unlike anything I’ve come across in my millions of hours of Halo, and CJ showed me an effect that occurs in the level that actually loosened my ability to control pee.

But not in the “I’m so happy, I’ve lost all control of my ability to behave like an adult,”-way. It’s more like: “OMG, I need to be held. And held tight.” The effect is jarring and intense, it, just like the level you’ll see it in, is radically different from what players may expect from a Halo-game. But, at one point, equipment was something that was radically different from what players expected in a Halo-game, and while this is just an effect and not an entirely new, game-changing class of items, I’m confident folks will think this fits right in, as well.

Pretty soon, copies of the September issue of U.S. enthusiast publication EGM should be showing up in subscribers’ mailboxes, the contents of this issue includes new details, images, and features on Halo 3’s campaign and multiplayer experience. For folks without subscriptions, you can furiously mash real-life-F5 at your local bookstore starting August 7.

Frank and I have been spending a bit of time playing System Link Co-Op, in addition to our semi-regular multiplayer sessions and on numerous occasions lately we’ve witnessed brand new behaviors from Halo 3’s principle foe – the Brutes. In Halo 3’s final stages, Brutes have begun to think. They’ve become acutely aware of you and your location, so much, in fact, that in areas where you are above them, they’ve begun to climb. Reaching up with their giant arms, they pull themselves up to your elevation, blast their way through your marine buddies and if you're lucky you might turn around in time to hear the squishy thud of a spike grenade ripping through your MJOLNIR armor.

Another way the Brutes continue to prove to me that they are in fact, smarter than I am, is in their ability to adapt and adjust to situations on the fly. Future Halo 3-owners can look forward to scads of moments where they’ll believe they are about to execute some grand strategy, only to have a Brute or a pack of Brutes show up and foil your plan, using the exact correct countermeasures. As fun as Halo and Halo 2’s Elites are to fight, the Brutes in Halo 3 have shaped up into something really special. I’ve had more fun fighting them, than any foe in previous Halo games. [Me too, I like 'em better than Elites, for fighting - last minute Frankie departing thought.]

September 25th is getting closer.