The Bungie Weekly Update is short, but contains some fun news and details about hot new items in the company store. Oh and Marty's Halo 2 Vol. 2 soundtrack is available in stores now, so go buy it. Mmmkay?

The purpose of the test was to see how I would react to the behaviors of various AI opponents. As you can imagine, I befriended them and traded silks for Gold Dubloons with them. I PROMISE this is the last week I will tease you with Pimps at Sea fakery, but most of what I just said is true.

Sketch played the same test, yet came back with a completely different experience. Which is presumably the point of good AI.

My mailbox is swollen with requests to acknowledge or deny the IGN story from earlier today. As usual I cannot comment on any of what the press says, other than to state that I sometimes literally don't know where all this stuff even comes from. We read it on teh internets in the morning, same as you.

Diplo-Mat Noguchi comes over and points out again, that he is a "genius." Although he admits to "having solved, fixed or done nothing."

It's also officially Bungie Summertime, as of today. We've switched to iced coffee drinks from Starbucks, fully switched to shirts and flip flops (yeah, calm down ladies) and started BBQ-ing in the Bungie backyard. True, a bee came, but we just hid 'til it left. No doubt it will rain next week to remind us who's really in charge of when Summertime starts.

NinjaonFire has a treat for hardcore LAN and custom game fans.

Have you ever wanted to know the exact settings that we use in our matchmaking playlist game variants? If the answer is yes, you're in for a treat! After many requests from members of the community, we have decided to provide a spreadsheet which contains all of the specific game variant settings. You can use this data to create your own gametypes to practice in custom games on Xbox Live or in a LAN environment, or use it as a reference when making suggestions for future matchmaking gametypes and updates!

Below you will find a link to download a snapshot (in the form of a nicely organized Excel spreadsheet) of the matchmaking playlist game variants which is up to date for the latest April 2006 release. It took some effort to put together and should be accurate, but it's a lot of information so if you find a slight inconsistency or typo, you're not allowed to complain. Now that the disclaimer is out of the way, here are the goods, enjoy!

The Bungie Store is updated with some cool new swag, all of which, as usual, was designed right here at Bungie (seriously - and usually by Andrew, Chad and Lorraine). There's a few new tidbits, my second favorite is the Halo Keychain. We basically don't make anything for the Bungie Store unless we think it's cool and/or we want one. 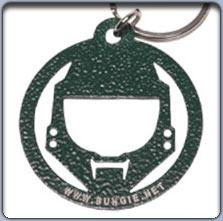 Rumors that this Master Chief themed keychain just also happens to be the exact correct dimensions to open a beer bottle are just that, rumor mongering! These were designed with one thing and one thing only in mind. Stable keychain functionality!

My third favorite is the big cup. Which I will fill with frosty suds. Soap suds if you like. Whatever helps you sleep at night. Maybe I will open my "soap" containers with the keychain above. 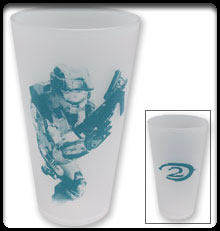 But my super-duper-absolute favorite of all times evar [sic], is the messenger bag. Dude, just look at it. It's 100% awesome. And features an iconic Chief portrait and tiny, "I could still get a girlfriend, just-maybe" logo too. Anyway big things are coming soon. So be patient, bear with us, and enjoy the weekend. 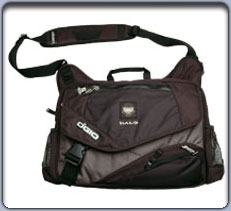 The cup is cool, but not as cool as the cup of creativity shared by Joe Staten and Peter Jackson last week in New Zealand. Harold Ryan, the Studio Manager was there, but he was simply strangling sheep with his bare hands while Joe and Peter talked movies. More news on that soon. It floweth over.

And finally, I was too busy to finish a Mister Chief so here's an unfinished Mister Chief. Woot. 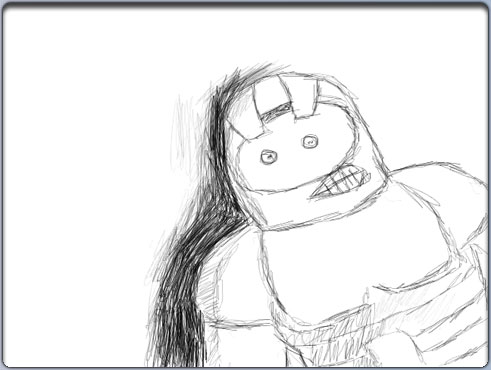