Sketch reports back from Germany, where he's continuing our Halo 2 Vista Vistravaganza Week. We also chat in loose terms about Halo 3 graphics, but nothing to get too excited about, and apologies once more, for a horrible, horrible piece of art.

First off, the filthy whoring of our partners and their products. The Penny Arcade Expo starts today! Hurrah.

You see, since they blasted E3 with lasers from space, there's been little opportunity for consumers to play the latest and greatest video games in a brightly lit conference center of their peers. What? E3 was no consumer show, you say? Well, unless EA, MS and Activision are entirely staffed by 17 year olds with Weezer T-Shirts and Naruto pins, I'd say the wily consumer somehow found his way into E3, like a Raccoon finding his way into your trash.

At PAX , they can wear their Naruto pin proudly on their sleeve (although the lapel would seem a more logical location) and rifle through the gaming garbage in full view. The PAX show has a kind of soft edged fanboy lovefest aspect to it also. It's like Woodstock with Warcraft. People actually play all these games, and have contests, with prizes. They shake hands, they smile and they make friends.

Speaking of which, we'll be in attendance at PAX, showing off our Halo skills - a team of four iron-jawed, baccy-chewing übermens, will be entering the PAX Halo 2 tournament tomorrow (Saturday) and trying their best to win a single, solitary round. Literally - that is their top level aspiration.

Meanwhile, Shishka, Ninja and two unnamed hawt chicks are entering as a rival team. Their team is called team ButtonMashaz. But I am praying they end up matched against Bungie. That would be sweet.

And don't forget I am doing a panel, from 7-8pm, entitled, Forums, Blogs and Fanbois: The Role of Community and PR in the Game Industry . That will be at the Satellite Theatre. So if you have any complaints about today's update, then feel free to bring them to that panel live.

"We're really excited to be working with Hothead Games on our first electronic adventure," said writer Jerry Holkins, his clawed feet resting atop a huge slab of granite. "From the moment we laid eyes on them, it was clear they had the technical and creative chops to execute our grim vision. Now that we have pooled our strengths, our dark work may truly begin." Holkins then paused to eat a rat whole.

The first game, entitled Penny Arcade Adventures: On the Rain-Slick Precipice of Darkness, will be a comic adventure game initially available for Windows, Mac OS X, and Linux, followed by a version for next-generation consoles. The game will be available by digital download, delivered in episodic format with new installments of the adventure coming out several times a year.

Better not be an FPS. That's all I'm sayin'.

Sketch, our beloved leader, is in Germany right now, at the Leipzig Games Conference and he sent in this report:

Guten Tag from Leipzig, Germany! This week I've been overseas attending the Leipzig Game Conference in support of Halo 2 for Vista along with Jo Clowes (MGS producer for H2V) and Domenic Koeplin (Bungie test lead for H2V). If you're like me, you probably never even knew there was a game show in Germany. Well there is, and let me tell you, it's pretty darn intense!

This show is actually bigger than E3 – in both sheer square footage (the events center is incredibly massive) and attendance (well over 100,000 people expected over the course of the 4-day show). In terms of catering, there's a hell of a lot more pork products here along with beer that is vastly superior to anything served at the LA Convention Center. The other huge difference is that the Leipzig GC is open to the public – unlike E3 which requires 13 forms of industry ID along with a DNA sample to get past security. All the big names are here along with a whole host of local companies and services catering to the German and European market. The Microsoft booth is… different. Let's just say it's modeled after a park with a little beach thrown in – I'll leave it at that for now and paint a clearer picture in a more in-depth write-up next week.

Considering the scope of the show, the timing and the fact that PC gaming is very popular throughout Europe, it seemed like a great venue to reveal Halo 2 in playable form. We have six stations set up on a LAN, all running a dedicated server that dishes out slayer games on Midship and Lockout. Players can use either a 360 controller or opt for a mouse and keyboard. The game is running on a beta version of Windows Vista and looks better than ever in full 1920x1200 hi-res glory.

Naturally, Halo 2 Vista isn't "done" yet, it's still a work-in-progress.. As such, it's got a few tiny wrinkles that are present but we felt the experience was solid and fun enough to let GC attendees get their hands on it. Based on the crowd reaction, it seems to have worked out just fine. With the help of some translators we spoke with a few hardcore Halo players (level 35+ in matchmaking) who all enjoyed the game and were very impressed at how good it looked and played at this early state. Something must be right when people would come back to play again and again despite having hundreds of other games to see and check out at the show. That said, we still have work to do before the game comes out next year and fine tuning the controls and maintaining the "feel" of Halo 2 for both mouse/keyboard and 360 controller is one of our highest priorities. Tweaking and balancing the nuances of Halo 2 will be an ongoing exercise until the very end I'm sure, but will no doubt come out exactly as you expect it to be - Awesome.

I'm heading back to good ole Washington tomorrow while Domenic and Jo keep the Halo 2 Game Conference lovin' going through the weekend. It's been an awesome show and the trip itself has been a great experience full of great people (and great beer!). I'll share some photos and more details on Bungie.net early next week. Auf Wiedersehen für jetzt!

That's German for "Kiss my butt, jerks!" Sketch has missed all the fun this week. Including some more short-lived programmer art - how about flying hearts that float skyward every time you step on a non-final texture? That's what I watched as I wandered into an otherwise gloomy ravine. Big, red hearts that animated and flapped skyward with almost every step. Sort of ruined the oppressive atmosphere the level designer was going for.

I also played around in the suddenly populated and encounter-filled version of a previously empty indoor environment. I ran around with a flashlight enjoying the bump-mapped textures, and then nearly filled my diaper when a Grunt popped out of nowhere and started shooting at me. I wasn't really expecting much resistance while trawling for pretty graphics. I was also admiring some cracked pavement on an outdoor level, just to let you know what a huge graphics whore I am. But it really is lovely. Tarmac is all normal, and then slowly gives away to cracked, then rumpled and then ends as it empties over a gulf. I wandered around, spinning the camera to see how the bright daylight affected the bump effect. 100% convincing.

Ha-ha. Joe Staten just dropped in a weapon that I pray will be included in the final game, but knowing my luck, won't. Right now, they're testing it for feasibility rather than balance. Joe insists on using it in the debug third person mode, because it's funnier. Of course, now it's annoying because he's running around the level destroying everything with it and he won't go to the next mission trigger. JOE! Move it.

He's worse than one of those people who won't run down to the water's edge in a video game with cool water. I have a theory about folks who make gameplay look bad by doing boring stuff instead of cool stuff when they first pick up a joypad. But it's mean, so I won't share it.

Actually, I have no idea what our final water is going to look like - the stuff that is in there, while pretty, is only placeholder. My favorite video game waters to date are:

Don't underestimate how important game water is. It is the single most important thing in video gaming. Above fun, above replay value, above depth. Water!!!!!

No movie news this week - to explain, I should point out that the movie is certainly a Bungie project, but our partners, Universal and Microsoft, have to approve everything we mention. Since it's hard to coordinate that approval sometimes, we occasionally seem more bewildered than we actually are. Anyhoo, we will have movie news soon, I'm sure.

Finally, somebody asked if, like many artists, I actually based Mister Chief on myself. The answer is a definite no - as you can see from this recent photo. 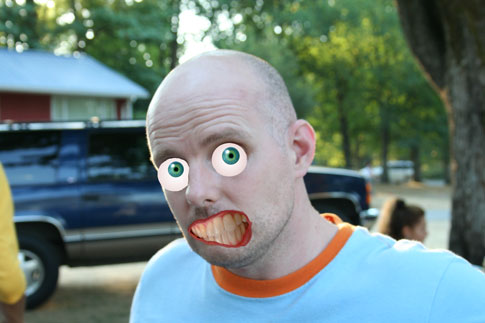