A smorgasbord in this week's Bungie Weekly Update, but is it feast or famine? Depends on your perspective.

Development on Halo 3 is winding down. While there’s still a considerable amount of dudes here on site, playing through the game, testing the game, filing bugs and fixing bugs, the game is roughly 99.9% complete. That last .1% percent is pretty important, however. Right now, some testing is being done in a controlled retail environment via our Halo 3 Epsilon. You’ve probably seen reports online or even folks on your friends’ list playing it, so here’s the scoop:

The Epsilon is a closed, final phase testing for Halo 3. We won’t be making the Epsilon available for public consumption, so while that’s immensely disappointing for folks hoping that Friends and Family invites would be extended for the Epsilon, just know that each day you wait in agony is another day closer to September 25.

The Forge
Halo 3’s Forge is a mode that allows for both play and design to co-exist and cooperate. A multiplayer focused tool, Forge will allow players to customize multiplayer maps, changing and resetting spawn points, weapon spawns, weapon timers, vehicle spawns and timers, vehicle spawn points, and add existing geometry to the map’s existing structure in the form of crates, boxes, fusion coils, lifts, teleporters and more. The amount of items you can drop is regulated by an economy budget system, with different items having different values and each map having an overall Budget that the items you place cannot exceed. By deleting existing things off of a given map, you can actually place more things. Players can modify and create their versions of maps, save them and share them with their friends, but that’s only half or so of what Forge allows.

In addition to functioning as creation-driven tool, Forge is also a playspace. Up to eight players can be on a given map at a time, shifting back and forth between their chosen multiplayer model and the Forge model – a Monitor. Players can play actual games in Forge, goof around, kill each other, play Slayer where each team designates a Monitor to supply weapons, vehicles, equipment and cover on the fly.

The three beta maps plus Last Resort and Sandtrap

Various U.S. and worldwide enthusiast outlets have played Tsavo Highway now, and you can find their impressions through the Internetz tubes. If you’re not inspired to track down the impressions yourself, here’s the skinny on Tsavo Highway.

Beginning in a subterranean labyrinth somewhere in Africa, the Master Chief and a squad of marines need to rendezvous at the semi-nearby city of Voi. Just how long that trip will take depends on if you’re going to cross this sun-scorched African savannah, dotted with massive remains of the destroyed space elevator, Covenant outposts and Covenant checkpoints is up to you – you can go by foot, or perhaps more appropriately by Warthog.

There’s going to be much more surfacing about Forge all over the Internet soon. Additionally, folks attending the upcoming Penny Arcade Expo in Seattle and the Leipzig Game Convention next week are due for an injection of Infinite Win.

No, this isn’t hyperbole about moving units of Halo 3, instead it’s about playing Halo 3 on a monstrous iMAX screen early this morning. I met up with a couple of Microsoft marketing dudes down at the Seattle Pacific Science center and fired up the build of Halo 3 I brought chained to my wrist in giant-screen glory.

Before I saw it, I didn’t think an iMAX sized presentation would work, I doubted the might of technology and top flight projection software alike. When I booted up Sierra 117, with its God rays streaming through trees, reflecting softly off of the water the kind folks from iMAX and the gentle-hearted Microsoft dudes simultaneously uttered “Holy -blam-“

Rightfully so, I’d say. We were only displaying the game on roughly 70% of the full iMAX screen real estate and I was playing from the back row enjoying the sounds and vision of Halo 3 in dinosaur-like sizes (big dinosaurs, not those crappy little ones that eat vegetables). If I could’ve made everyone else leave for the weekend, I would’ve played through the game, but the deal they wanted to make was if I wanted to play through the whole game, they had to sit and watch the whole game. Studio Head and Sith Lord Harold Ryan would’ve force choked Captain Needa-style if he felt non-Bungie employees seeing Halo 3 in its entirety. Frankie, had he been here, would’ve been in A/V heaven, but alas he’s airborne on an epic flight back from Australia.

How the Pros Do

Hey folks, Roger here. The Bungie server-programming team has been working on some cool new features to integrate with Halo 3, and it’s time to spill some details (all of which may, of course, change before launch. Or even after, really; anytime we have a whim to mess with you guys.) Topic of the day: file sharing. You saw the basics of this during the public beta: custom game and map variants, screenshots, saved films and film clips can all be uploaded to your personal (but public) file share on our servers. The current plan is that everyone with a copy of Halo 3 and an Xbox Live Gold account gets 6 slots where you can place up to 25MB of these files to share with the world. Saved films take up the most space, and 25MB should be enough to hold several longish 16-player games. We don't think the average user will be hurting for space.

"But wait!" you exclaim, "I'm not a merely *average* user! I plan to win every motion picture award there is with my exquisitely choreographed, epic-length saved films!" And *that* is where Bungie Pro comes in. "Bungie Pro?" you ask, an eyebrow raised. "I'm listening." While we can't give huge amounts of free storage to every one of our users, (note that unlike webmail sites, Bungie.net remains ad-free,) we're happy to accommodate power users with a premium storage option that we've dubbed Bungie Pro. Inside your file share, you'll find a button that will lead to an Xbox Live Marketplace panel, offering you a one-year "subscription" to Bungie Pro for a planned 750 Points. Buy this, and for the following year, your file share will balloon to 24 slots and 250MB. At the end of the year, you'll be asked to either re-subscribe, or else bring your share back under the default limit before you can upload new content. (750 Points comes to about 78 cents per month, by the way.)

"But wait!" a much smaller set of people calls out. "Why pick 24 / 250MB?" That's really a design decision - we figure that users of the file share don't want to have to page through endless lists of other people's files to see if there's anything good. Keeping it limited will make content authors do their part to keep their shares clean of the less interesting stuff. But if this *still* doesn't sound like enough for you, we have yet another option - while the free file share is restricted to Gold accounts for obvious reasons, we're making Bungie Pro available for purchase for your Silver accounts as well. You've created "mule" accounts in an MMO, right? Betcha never guessed you'd get to do it in Halo, too!

But wait, there's more! (That's me saying "But wait!" this time, not you.) Browsing file shares in-game is one way to find content, but it can get a little cumbersome. That's where Bungie.net comes in. When you visit the website, you'll be able to look at your file share, and everyone else's as well. Saved films and variants, of course, aren't viewable on the PC because they're just a sequence of game data, but you'll be able to pass around links, see the file descriptions, and even click a button to add it to your download queue - next time you sign in to Halo 3, the game will auto-download the files (up to 8, currently) that you selected on the website. Screenshots, though, you can view directly on Bungie.net and save off as wallpaper -- and they look *great*! Add to that features like "copy to my share" where you can import a file you like on someone else's share directly to your space (or your mule's) so you and your friends can find it in-game, file ratings, and discussions, and we think you'll find this to be an essential part of the Halo 3 online experience.

File sharing is only one of the Halo 3 server-side features that we've been working on, so stay tuned over the coming weeks and we'll have even more to discuss.

Bam. Roger, Roger. An additional note, the file share that each Halo 3 user has by default is not the extent of their stored files, just what they choose to upload and share with other players. Players can choose to upload up to six files, be they films, screenshots, map variants or gametypes, to their file share but when they want to share something else, they can replace any of the six currently being shared. The six files are just what is actively being shared, not what is being stored on your hard drive. 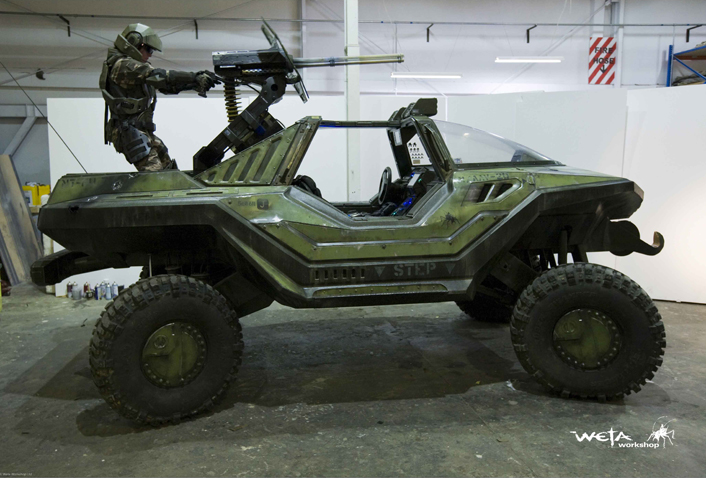 The above image shows just how to scale the Warthog that WETA has been making is – that’s a real life human manning the gun. While there’s still not too much to talk about regarding the excellent work of Neill Blomkamp, the studio did get a sneak peak of his next short earlier this week. It prompted a number of “Wait, was that a…” and “ZOMGz” from the various folks around here, and needless to say, when it surfaces next, you’re in for a gritty and delightful treat.

We’ve put up some new screenshots in the Gallery area. In addition to a new image from Tsavo Highway, there’s a handful of screenshots from a never before multiplayer map, Narrows.

Previously referred to as both NewMap001 and Long and Lean, Narrows takes place on a large, chilly Forerunner bridge. While symmetrical in nature, that symmetry is slightly interrupted by varied power-ups on either side of the map. A Rocket Launcher rests atop the central bridge, while a Shotgun sits below it on the low bridge. Battle Rifles and an assortment of dual wieldables decorate the bases at either end of the bridge. For fast travel from base to base there are Man Cannons that allow for in-air collision and general hilarity if two people take flight at the same time.

Speaking of general hilarity, next week's special guest on the Bungie Podcast will be none other than the angry one himself: Mat Noguchi. We'll make sure the Noguchi train is driving straight toward fury-town, but in order for him to be appropriately vitriolic, he'll need a little prodding from you folks. So shoot me your questions for Noguchi here at Bungie.net and we'll pick some and see what unfolds (other than a lot of editing). Download the latest episode of the Bungie Podcast here.