The penultimate in Downloadable Content teases, a visit from giants and Optimatch/playlist information.

Even though very, very bad things happened to the San Francisco 49ers (if you ask them, at least. Test Manager Jamie Evans was thrilled with what went down) in their Monday night game against the Seattle Seahawks this week, we’d like to think that the 49ers that stopped by at Bungie Studios had a pretty good time on Sunday night. Five offensive lineman (Adam Snyder, Tony Wragge, David Bass, Joe Staley and Kwame Harris) for the San Francisco 49ers came by the studio for pizza and cold refreshment, fellowship and most importantly, playing new Halo 3 maps.

Bungie has an on-site security professional, Jerome Simpson. Jerome, compared to most of our staffers at Bungie is a monster. He’s like the Undertaker when he first joined the WWF, just bigger than all of us with the ability to choke slam anyone of us at a given moment if we do something like forget our key cards to get in. Yet, in the presence and company of the 49ers offensive lineman he looked like a child. These guys were giant, but they were gentle giants.

Steve Cotton, an environment artist on Halo 3 and one of the leads on Halo 3’s DLC team arranged the visit and thought it the 49ers best introduction to DLC would be a 49ers versus Bungie match on Art Vandelay. We were all playing in the front playtest lab – the same lab you’ve seen on ViDOCs, where there’s been incredible amounts of yelling, hollering and beeped out words – and we had sixteen players for our games, but only five 49ers. A couple of us switched teams (myself included) and started to play.

Art Vandelay with 16 players gets a little bit zany. Bits of cover that are perfectly serviceable in 4v4 or 5v5 games become death traps simply because there are so many dudes running around praying, spraying and hucking grenades, resulting in general carnage, mayhem and all-too frequent betrayals. Even though the 49ers received some help from Bungie team members they were still on the receiving end of a butt-kicking.

Faux-dissension spread through their ranks and they wanted to be split up so the teams were reshuffled and made a bit more competitive, certain 49ers refused to play with other 49ers in schoolyard arguments come to Halo 3. It felt like an ABC after school special, except in this episode, the kids were giants.

After a few crowded rounds on Art Vandelay we moved over the Jodrell Bank, which is where we played the majority of our games for the rest of the night. While John Carpenter’s Prince of Dorkness is perfectly suited for eight versus eight chicanery – even after our time on that map, the 49ers wanted to return to the Bank for more insanity.

We played a handful of Team Slayer matches on Jodrell Bank with each side’s Warthog tearing around causing incredible loss of life unless the Spartan Laser resting at the middle of the map or either base-side Rocket Launchers were acquired and used to their fullest. There’s a number of ranged weapons available and the usual compliment of short range weapons for interior base conflicts.

In Halo: Combat Evolved a decent pistol could control half of the map, while there’s no weapon like the pistol in Halo 3, a good battle rifle can similarly control half of the map here, it’s a functional similarity while being a completely different experience. Jodrell Bank’s smaller size and the Battle Rifle’s non-pistol-esque range is what limits that engagement distance. The bases on Jodrell bank are different from the Blood Gulch bases as well – they are more labyrinth-y with more slippery spots to camp with a Shotgun and wait for unassuming fools to stumble into your boomstick. 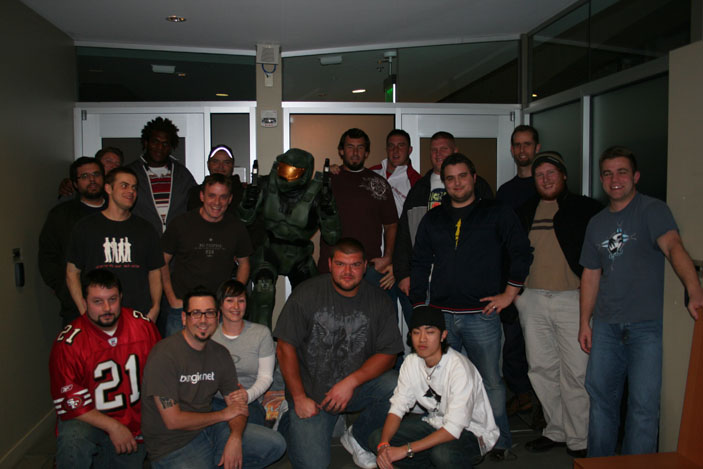 Joe Tung tracked down some data on the achievements that have been completed by folks whose 360s are connected to Xbox Live. Here’s some data for folks to chew on:

There’s been significantly more policing happening in the Optimatch forum lately, in part because we still want that forum to act as a resource for us and in part because the white noise and knuckle-dragging is getting a bit unruly. Do keep posting there, but make sure you check out the forum rules before you do. The bans are both pretty harsh and semi-immediate as Ninjas are constantly circling in the briny deep and there is chum everywhere.

Tyson Green, the multiplayer design lead, has taken a pretty active role in that forum checking in and answering questions somewhere between occasionally and regularly. That's certainly a dialogue we hope to continue.

We had a meeting this week about changes coming to the Matchmaking playlists. Even though the most recent group of changes just went live, Tyson and Test are already at work managing the spec for the next updates as well -- the first isdue around the time that DLC is set to arrive withan expanded update the following week. Without showing too much of the hand for the Double Stuff of Playlist changes, there will be considerable adjustments coming to the Matchmaking hoppers – including one particular change that hyper-competitive jerks like me will enjoy.

Team Hardcore is a playlist that members of the community crave like a pregnant woman craves pickles and peanut butter. And sooner than later, it will be making its way back to Halo 3. Exactly what "Team Hardcore" means, we're still sorting out, but it will likely resemble the Team Hardcore that folks became pretty familiar with in Halo 2 with some tweaks made for the Halo 3 environment. There's a handy thread where we're checking out your thoughts on what makes something Hardcore, here.

In addition to being excited for Hardcore, the other changes coming to the Playlists in that DLC timeframe have me pretty stoked to continue my desperate quest for Level 45. But per Tyson's request -- mum is the word and tight are the lips, for now.

We’ve got a whole week off to starve ourselves before gorging on turkey and whatever else folks decide to mow down over the week break (I'm going to be dining on a smorgasbord of awesome games) so there won’t be a Weekly Update, Humpday or a Podcast next week. But, on Monday (November 19) folks are definitely going to want to check back in here at Bungie.net and keep faces pressed to their monitors like children breathing on school bus windows in November, because there will be news. Oh yes, there will be news.