The clock is ticking. Every week the game gets closer and closer to completion. That's the good news. The bad is that means there's less time and less development to talk about. But talk we do. This week we're back at Halo Babies where we discuss music and madness. So check it out.

Seriously, just go over to Halo Babies to see what's going on!

I had to catch a 6am flight this morning, and it was full of giant chicks. Seriously. I don't know what the deal was, but there were about twenty women, of various ages and demographics, whose only common feature was sheer giganticness. Seriously, the smallest one was about six foot two. And they weren't basketball players either they ranged in age from about 15 to 70. But they were humongous. I was totally afraid. What if they were planning on jacking the plane and flying us to their giant Lady Kingdom?

Speaking of flying - I'm lucky enough to go to Japan at the end of the month for the Tokyo Game Show - so we may have a brief intermission between updates. The schedule is kinda brutal though - I fly there, arrive exactly in time for the start of the show and leave exactly as it ends. Book-ended with 11 hours each way in coach, middle seat, near toilet in back. But as usual I will try my best to grin and bear it as I am crushed between a perspiring real estate salesman flying to Japan for the Grengarry Reads, and a drug-addled linebacker from the '76 Broncos. So if anyone from United can get me a free upgrade, I'll make it well worth their while...

As I write this, I'm in a video editing studio in LA putting the last finishing touches to a number of projects. One of them you already know about - the special limited edition DVD. The documentary stuff on there is really cool and perfectly captures the mood and drama of daily life at Bungie. It's 100% realistic with the following exceptions: Hardly any swearing and all of the really obscene graffiti from the whiteboards has been cleverly removed.

The documentary was a real eye-opener even for me. It gives a true insight into the process here: The ups, the downs, the struggles, the triumphs, and the constant drive to make everything great. And Parsons' spastic-colon gets a whole chapter. I expect the FCC will kill that part.

The documentary footage is being mixed, edited and perfected at a studio in Santa Monica, and I'm just down here to make sure they get the latest footage from the game to implement in the video, and also help with a slightly weirder project - the attract mode.

Most video games have some kind of attract mode - the part of a game's title screen where it starts some kind of footage loop, showing off cool moments and teasers from† nifty parts of the gameplay. So I'm down here to play, test and make sure the guys have everything they need. It's an awful lot of effort for a couple of minutes of footage, but like everything in the game, the Bungie team is obsessed with making sure all the details are taken care of.

The attract mode will be cool, but pretty much what you'd expect - moments of single player, multiplayer and Live, strung together with some bangin' choons and fast paced cutting. What's more exciting (to me) is the nifty backdrop we've created for the main title screen. I heart it. And it goes beautifully with Marty's new music, all of which is composed (but still being implemented in the game and cinematics.)

The cinematics too are reaching a final level of polish. A lot of them are 90% done and are being tweaked and tuned. They're also adding things like depth of field effects, fog and clever lighting. They're light years ahead of the old ones, and tell the story with more fluidity and drama. Joe Staten is a genius. Wait, that's hyperbole. Joe Staten is OK I guess. And one of our PR people actually teared up at a scene (no conspiracy theorists, it was NOT a death, she cries at almost everything.) thanks to its stirring music and immense drama!

Marty O'Donnell is OK I guess too. And I am especially into saying he's OK I guess, because he just cave me all the music in MP3 format to listen to. Here, I'll hum you a bit: "Aaah, ooooh, ah, ah, ah, ooh..." which is from an as-yet unnamed track. Marty is letting me help choose names for the pieces. He thinks very literally while composing, to get into the meaning of the music, so his original titles are things like, "Sad Voices" or "Fast Drive" and then after the fact, he comes up with better, more appropriate names, and he's letting me help. So expect tracks to be called stuff like, "Space Shenanigans" and "Astro-Ass-Blaster." I'm basically a poet.

Now here's a warning. If you pre-ordered the special collector's edition, with the metal box (I call it InfiniSteeluminum to make it sound like it's from the future) then you should be aware that the DVD that accompanies the game contains tons of spoilers. Seriously, big-time spoilers that could ruin the plot. So don't watch it 'til you've played it! But then watch it hard-style, since it's going to be packed full of really cool stuff.

You know what else is packed full of really cool stuff? Apart from Parsons body part fridge, that is? The game. This week I downloaded the first build of the game with every level, every cinematic and every encounter in it. That was a pretty big deal. That meant I was finally able to play through the entire thing at the correct pace, fighting bad guys where I was supposed to, watching the dramatic cinematics when I was supposed to, and getting a true feel for the length of the game. Which I will not discuss here. Because I've been playing the levels out of order, I had entirely the wrong idea about the pace, and instead of doing my normal crap - that is, playing the bits that the job requires me to in an order that isn't always best suited to the narrative. I've been diligently going through one level at a time, in the correct order and watching all the cutscenes in their entirety (another first for me). I love them.

So that's it. I've been out of the office so long, I don't really know what's going on anymore. Sketch is back next week, and things should get back to normal, but seriously, this game is nearly finished. I'm super excited. And wicked busy.

So until next week, here's Mister Chief, enduring airplane horror. 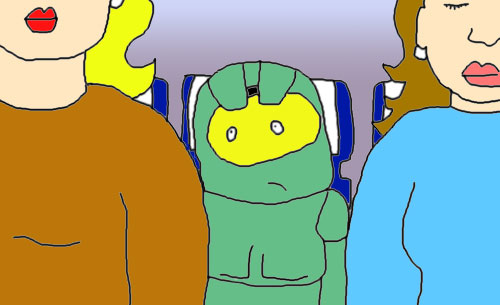