The Bungie Weekly Update takes the form of a Q&A this week, since there's nothing much new to report. But we did answer every question we could, as long as it had nothing to do with Our Next Project. And yep, that icon to your left is from the Halo Graphic Novel.

This week, we had nothing new to report, so as is tradition, we simply offered you guys the chance to ask questions on the Bnet forums. These were the choice ones.

Here is a question that I know several people would like answered:

When the Pillar of Autumn makes a jump, to adjust for normalized Earth time it will recalibrate equipment once position and relative position have been established. However, since the Autumn made a blind jump and straight into combat, no battle or field equipment was recalibrated. For that same reason, "north" on an assault rifle's built-in compass simply defaulted (per instructions from Keyes) to the largest visible source of gravity and magnetism - Threshold. The Earth-normal date was in fact September, in spite of what local equipment displayed. If poor old Jenkins had survived, his equipment would have been reset on the next (deliberate) jump.

Any idea for a Director for the film yet?

How many other Halo books are planned on being released in the future?

No announcement on a director yet, and remember that the information on IMDB is submitted by the public, in a Wikipedia fashion. There are at least one and possibly three Halo books to look forward to in the future. Eric Nylund's next is well under way, and "Ghosts of Coral" is the working, not the final title.

Since Alex is gone, is Jason officially The Man or The Other Man?

He's the man. Even though he lobbied hard for "The Dude."

What plans, if any, does Bungie have to keep Halo 2 fresh until the Next Project™ finally arrives? (outside of MM updates) ((which are past due btw)) Thanks!

Well, we could just stop what we're doing on the next project and make new content for the old game, but we have a feeling you'd be mad about that. Matchmaking will continue to be updated (and soon) to keep things fresh. And if anything changes on that, we'll let you know.

Will the other Halo vehicles ever be made into action figures? Also will you be releasing a Halo Xbox 360 faceplate any time soon?

There is always the possibility of more Halo action figures and vehicles. I personally would love to see a radio controlled Hog, and we continually communicate with our partners on stuff like that. As for a Halo faceplate for the 360, let's just say I've seen a couple of potential candidates for the design and that it's something we'd like to see happen.

Will there ever be a Mister Chief T-shirt available in the swag department or at least some old school "Iron-On's" like they used to have down in the bottom of "Sugar Smacks" cereal boxes?

Actually, we designed some Mr. Chief T-Shirts and if there's enough demand for the horrible bastards, we'll actually sell them.

Most new games are first released in the marketplace as a demo first to find all the glitches. Will you release a demo of your next game before it is released?

Actually, most games aren't available as demos. Some games are. And they are not put out there to help programmers find glitches, they're put out there to let people try a taste o a game before they buy it, to aid the purchasing decision. The availability of any game as a demo on Marketplace is based on the team's ability to produce a timely demo without impacting their overall production schedule. That's going to be as true of Bungie as it is for EA, Ubi Soft, or anyone else.

What are the chances of bungie showing anything of there next project at E3.

Which part of, "Don't bother asking about our next project." didn't you understand? And yeah, unluckily for you, I read and pasted this before you edited it.

What is the current must play game of the Bungie crew?

I'd have to say Oblivion. And since my local game store is sold out of 'em, I can't tell you why. But I can tell you everyone here is playing it and ruining the story for me.

Any ETA on when the webcams will be back up?

We're working on it. It's a combination of security and network issues that we'll resolve pretty soon.

Would like to continue my obsession with Noguchi's wrath. :)

Aside from having the only perpetual junk collecting desk in the world (a rare artifact), how is Mat and Bob's product used in game design? Because of my lack of knowledge on the creation of video games I don't understand how the tools he creates are implemented with the other teams work. Does the team use his tools to actually create content (like images, animations, or AI progamming), to implement their work into the game, to see how their product will look and react once in the game, or is it used for something completely beyond my understanding?

Something I've been curious about but never sure who to ask.

Also, if you had to defend your special lady friend from a gang using a special attack from the Street Fighter series, what would it be? Throwing a fireball would certainly demoralize those thugs.

update: I just checked with my fiancée and she said she'd swoon from my fireball throwing sexiness. She also called me a nerd. She's right.

Many of Noguchi's tools get the disparate parts of the game to work in close harmony. Others do more specific things to make individual tasks easier.

If I had to use any Street Fighter move to defend my GF, I would do an air-Super Art fireball from Akuma in Street Fighter III Third Strike. I don't remember what it's called, but it's two fireball motions consecutively. But done in the air.

On a scale of 7 to 7, how excited are you guys about your next project?

Will the soundtrack Vol. 2 come to iTunes like Vol. 1 did?

What do you have planed for E3 that is not about your next project?

Have you read the glowing reviews of Marty's soundtrack at the iTunes store?

Yes. Annoyingly, I could only find one negative review. Which I printed here for the sake of history. 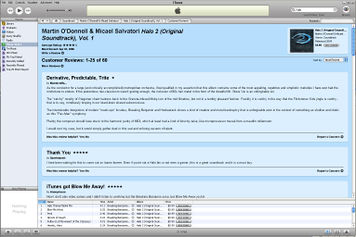 Are you worried about your Scottish kin now that Avian Influenza has entered our sacred land?

In the Official Halo 2 Strategy Guide made by Prima, a medal of " Destroyed Vehicle" is listed along with the regular of "Double Kill", "Sniper Kill", and "Carjacking" on page 173. I was wondering what ever happened to this medal, as every other medal on the page is in the game, except for this one?

Here is a link to the medal in question taken with my camera phone: http://img124.imageshack.us/img124/5395/vehicledestroyed0hp.jpg

Well, the strategy guide was finished before the game was, and it's just one of those unfortunate things that happens when you develop a game. Stuff gets cut. The medal in question was designed, built and implemented. However, there was an "ideal" number of medals, and so code connecting the act of destroying a vehicle in MP, was never implemented. The medal itself is in the code somewhere though.

If a Kha'ak jumped on your back, would you beat it off?

If you're referring to the Kha'ak species from the sci-fi combat game X3, then the answer is no, since they are only ever encountered in space combat situations. However, since you plainly haven't gotten that far in the game, it is obvious that you suck at the Kha'ak.

Is it true that the Scottish are taking over Bungie?

What is the total amount of people working at Bungie now?

About 90, including some test guys and other contract workers.

Finally, what did the Mister Chief T-shirt design look like? Well, it looks like this, and yes, that is the first ever Mister Chief. 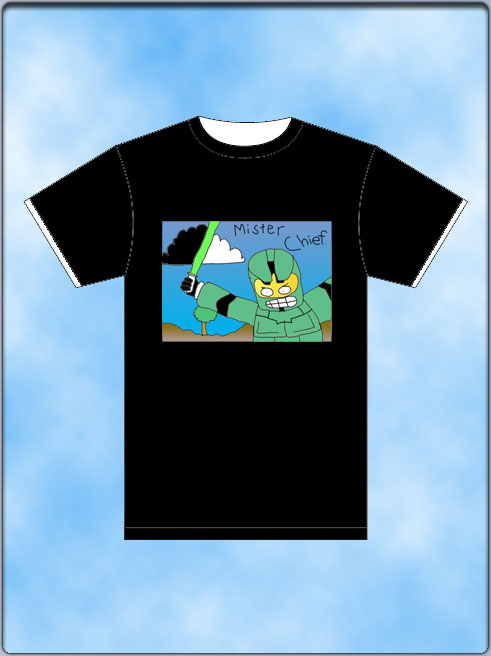 PS. The "bad" review of Marty's music is a fake one put there by a well-known Jerk. That is to say, yours truly. We really couldn't find a bad one.