Sometimes a busy week for us equals a slow week for you guys. This is one of those weeks, but don't fret, there will be plenty of cool new stuff to sink your teeth into next time. A little news about Pimps, playlists and pwnage.

Hey we were playing “Pimps at Sea” on Xbox Live last night. I have never had so many messages in one session before. I ended up attaching a USB keyboard to the 360 just so I could respond with either polite declines or hilarious jabs, depending on who was sending me messages. KP sent the rudest ones, I might add, since he was jealous. Of whatever we were playing last night.

Obviously Pimps at Sea is a codename for something else right now (Halo 3, dur). So when we do actually begin work again, on the epic life-changing experience that the “real” Pimps at Sea promises to be, nobody will believe us. The Bungie who cried wolf.

Anyway, we had a blast playing whatever it was, and were even able to get some stats. Think of it as a mini-Humpday challenge.

Here’s how it went down…

There was a very special Pimps at Sea Humpday last night, the first night in which players were able to take each other on in the Alpha. One of the playlists that’s being tested in matchmaking right now is Rumble Pit, which is the same as Halo 2’s except it’s set to four players right now. Last night a very special match occurred with some special participants. 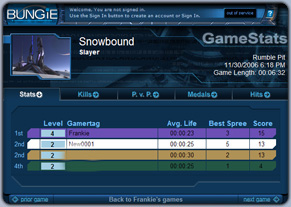 The match to end all matches, as a certain Scot might say, took place last night at 6:18. As you may be able to tell from my use of an actual game duration and the fact that I know what time the game took place, we do have stats being reported for these games. Reported to a secret location. Note that the stats you’re looking at were just sort of cobbled together with bits of Bnet code we had laying around. The scoring, ranking and stats shown here are simply not representative of Halo 3’s stuff, and should be ignored except in how they demonstrate the graping Tung received.

Frankie spent most of the game rockin’ the assault rifle. Most of his kills came from peppering his opponents while charging them and then getting in the melee before they could counter. Sadly, one of Bungie’s (former) best players, Joe Tung, got completely reamed. He got on a roll with a killing spree for a little bit, but couldn’t find a way to out-duel Frankie. Michel, our first unidentified hero also totally owned Tung. Joe’s pathetic performance was second only to SECRETZ, who was probably doing something important like running the studio at the time.

The match ended closely, but not really. Rumor has it Frankie let up on Tung just so that he doesn’t remove the assault rifle, melees and Snowbound from Halo 3. Truly, Frankie’s actions last night not only defined him as a winner but as a hero to Halo fans everywhere.

We also talked a little bit about the TV commercial this week, which is causing quite a stir. Here’s the details, as clear as we can make ‘em.

To celebrate the commercial, which we do so love, we made a Halo 3 theme which will be downloadable on Xbox Live marketplace sometime in the near future. Looks something like this (although it's subject to change). 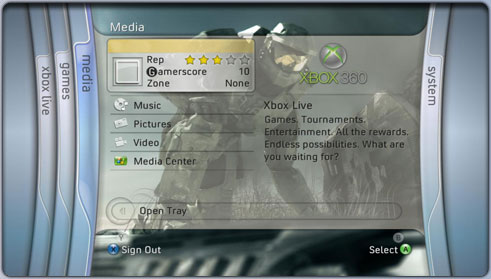 We’re recording combat dialog today. It’s kind of a test pass to get the process ironed out – there will be some new technology and features in the way our combat dialog is selected, and we need to make sure that the technology and the process are compatible. The first test of combat dialog will be the Grunt, played by our very own Joe Staten. His dialog today will of course be used in the final game and next week, we’ll have a couple of other actors in to reprise roles. One of them is a huge fan favorite.

Writing the dialog is a fairly challenging process and has been eating up my evenings pretty ferociously for the last few weeks. You can expect the combat dialog in Halo 3 to not only equal the sheer variety and volume found in Halos 1 and 2, but to do cooler things in terms of how it’s selected.

You’d be amazed how much effort the programmers, designers and audio guys have to put into this stuff. Writing it, by comparison is a breeze. And acting it is even easier – Joe just sits there, drinking Cristal and having his feet rubbed by Salma and pausing occasionally to polish his monocle and squirt out a grunt line. I kid Joe, I kid.

Joe in fact just came back from a session, he’s on a break, but his voice is already wrecked. I asked him to give me a sample line from the dialog but his favorite line was a grunt giving away something really big and secret about Campaign gameplay. His second favorite was a Grunt yelling, “Oh no! The Demon. No wait, he not have enough rivets on glove.”

The good news is that Jay Weinland, our audio guru, has promised to give me a sample MP3 or two next week for you to listen to.

The sheer amount of rage created by the removal of the Team SWAT playlist was expected, and still unfortunate. Again, we don’t remove these things for cruel fun, we do it to balance out the population loads and for other boringly mathematical reasons. So we are as they say, sorry for the inconvenience. And it’s possible that Team SWAT will come back again. In the meantime, you can find more SWAT modes than usual in team training. We upped the frequency to accommodate you, our buddies. Also please note that it is in fact against the law to send death threats, even by email.

Steve Scott, one of our amazing artists, showed me a new weapon today. No exaggeration to say that it is the single coolest graphical effect I have ever seen. He’s busy trying to make the effect look cool from every angle – it looks amazing in third person, or even when it’s in your face, but needs tuning in a first person view to look cooler, even though technically it looks the way it should. Sometimes artists have to exaggerate things to make them more obvious.

And finally, somebody asked me what a Mister Chief theme would look like. Booyah. 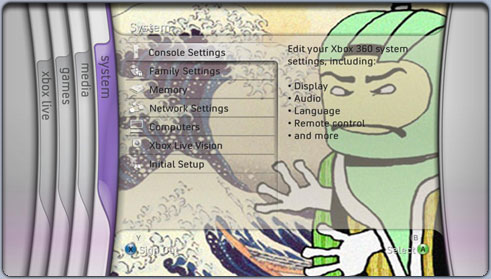