Despite being away on business, Frankie co-pilots this pre-Momma's Day Weekly Update.

Frankie is in New York this week, so he sent this note to me 20 minutes before the Weekly Update was supposed to go up – apparently he’s busy in New York doing stuff and things.

Bungie’s God of Love says: “So we’re setting up here in New York for a kind of media/fan/celebrity Halo 3 Beta launch event. Harold Ryan, Dave Gasca and myself are here in the city that never sleeps (because of the roaches, no doubt) setting up TVs, surround sound, networking and even an Xbox Live Vision Cam link to Finland. Don’t ask.

The event itself coincides with the launch of the Friends and Family Public Beta, giving a small selection of lucky folks an early entry into the Beta. If you’re a regular Bnet user of good standing, you might want to check your PMs – Roger and Tom picked a semi-random collection of Bnet users and PM’d them codes for the Beta, so in theory, you could be playing today. For everyone else, you’ll join the fun on the 16th.

The event here in New York is the sister to a near-identical one happening in San Francisco, which is being helmed by Brian Jarrard and Lars Bakken. Ours will feature a pretty nice mix of Sports stars, celebrities, journalists and perhaps more importantly, community members. We made sure to sprinkle in a few loyal Halo fans so that it didn’t turn into a giant ego-festival. And besides, we want to see their reactions.

Now, if you didn’t make it into the Friends and Family Beta this way (and in all likelihood, you did not) then fret not. Next week you can play via Crackdown and you still have plenty of time to go pick up a Crackdown, or a Gold account, or an Xbox 360 or whatever piece of the puzzle you might be missing.

The Halo 2 Maptacular pack got rolled into Matchmaking this week. A few of you emailed me “strange occurrences in matchmaking” alerts, for which I am grateful, but it’s actually a normal facet of a recent matchmaking update. Eventually – and this is really scientific and technical, so bear with me – the bits of data get vibrated into the correct dataholes, and the Matchmaking algorithms start to catch the beat. Discrepancies will be eliminated over time.

Luke Smith is back at the ranch, holding down the fort, because he’s the king in the castle. I am out of building analogies. Here’s a little introduction to the mammalian miracle that is Luke Smith, former news editor at 1up.com, and now content minky here at Bnet.

Luke, answer these questions or I shall destroy you:”

Q: Luke, welcome to Bungie. Tell the fans (and your enemies) what you’re going to be doing and what you USED to do. A: For the last year, I was the News Editor at 1UP.com, now I’m the Content Editor at Bungie Studios. In the simplest terms, I’ll be giving you more to read and listen to about Bungie, its IP and its staff.

Q: In your own words, without describing any specific function or feature of Halo 3, describe the most mind-blowing thing you’ve seen. This is a TEST. Marty’s office. How has the transition been, from intarweb supastar, to game development agent provocateur? A: It’s been a transition filled with many hours of Halo. It eases the pain.

Q: Which element of the public beta is your favorite, and why? A: The Spartan Laser. Despite Mr. Jukes’ video yesterday and the massive shedding of Internet tears about how “overpowered” folks think the Laser is, it’s not overpowered, it’s an elegant weapon from a more civilized age.

Q: Honestly, what is your least favorite thing about Halo 3 beta. A: There is a profound lack of Jub-Jub in this Halo 3 beta.

Q: Tell the fans about your Halo vehicles theory. A: Nerf vehicles lolz.

Q: Who is the best player at Bungie? A: I’m not sure yet, I’ve heard rumors, stories and myths – but I have yet to see with my own eyes. Regardless, the best of the best will unite like feral robot cats and combine into a sword-carrying bipedal monstrosity. That implement of destruction will be dispatched on Humpday Challengers.

Q: Throw down a gauntlet at your previous employers in the style of a Renaissance Faire LARPer. A: After I left Ziff Davis, they started hiring people BASED on their Halo 2 rank. So the next time we face EGM/1UP, they'll have a small army of recently hired "interns" playing for them. How can you LARP to something like that? You know who I hear looks pretty good in LARP gear? Multiplayer and UI producer Joseph Tung and that dude they named the Zanzibar's Froman tower after, Luke Timmins. Maybe we should ask them.

Enough with the Q&A bizness. Today at Bungie.net we put up a small army of screenshots taken straight from the public beta – which as a shaved, Scottish, New Yorkster pointed out above (in between filling his face with stanky hot dogs from sketchy streetside vendors and beating up on press in Halo 3) – opened up her arms to Friends & Family this morning. Next week, we'll roll out a ginormous heap of beta-related goods, guides, and information about what condition your condition is in.

This was the last thing Frankie said to me: “Luke, do a Mister Chief. And make it good. Else, destruction.”

OK, since tons dudes asked ‘U just started at Bungie did ur brain melt from Halo 3?’ I’ll let Mister Chief answer that. 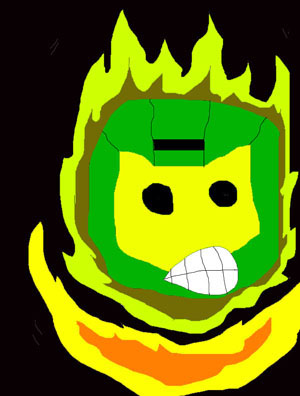