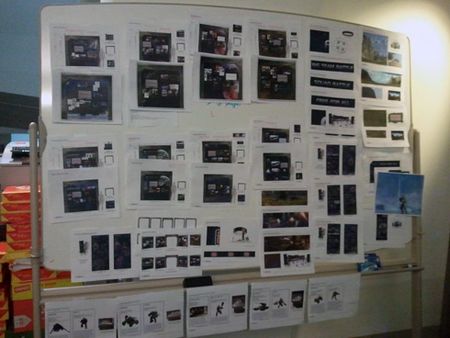 Let’s say you and I were tasked with stopping by the Washington State Convention Center to check on the progress of the Halo Fest preparations. Let’s also say that, upon walking in, we notice all the pieces of news set to be released over the course of the three-day weekend have suddenly taken on a physically tangible state. As we consider the clutter filling up the 30,000 square foot room, we find ourselves faced with two clear choices: pick up the chaotic mess of disclosure-filled announcements, or ignore the opportunity for enlightenment and continue along our merry way. Since I am against anything that has the potential to make beads of perspiration pop up across my typically sweat-free brow, obviously we'd choose the second option. But had we gone with the first option and subsequently decided to weigh the mass of clutter, we would be proud owners of a headline-making pile of Halo news and announcements weighing almost as much as an Elephant. And I’m not talking about the animal. Oh no, I’m referring to the behemoth-sized UNSC transport whose weight is equivalent to a metric number two-ton.

To make a cryptic scenario crystal clear, we have a lot of things we’re incredibly excited to share with you at Halo Fest. But why am I bringing that up now, with the festivities still 48 hours away? Because the impending explosion of news means I don’t have any big bombs to drop today. If your undies suddenly started twisting themselves into knotted knickers upon reading that statement, fret not because my brain continues to excrete partially coherent thoughts via my speed-challenged fingers. In summary, you will have lots to read in today’s Bulletin. Just not anything that qualifies as one of our typically sizable announcements.

Now that our previously precarious situation has been sorted, let’s begin our customary exchange of pleasantries! 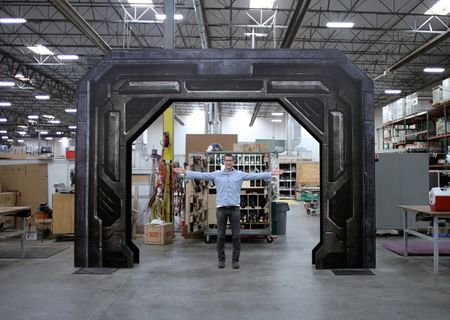 Halo Fest starts on Friday. For those of you that live in a world where not tracking sunrise-to-sunsets is acceptable, that is in two days. Actually, less than two days, if you prefer smaller, more accurate lengths of time. While I have yet to complete the Halo Community panel outline, I have next week set aside for that, so I’m not overly concerned. Worst case scenario, I’ll make the panelists sing 80s-themed karaoke during their allotted hours. The rest of the panels are good to go, though, which I can confirm as I’ve witnessed dry runs of several of them. The Halo 4 panel in particular was incredibly intriguing, and I’m not just saying that because they bribed me with pizza. Oh no, it takes more than flattened pepperoni-topped dough to get a good review from me. (Protip: it’s the cheese-filled crust that seals the deal.)

Speaking of the numerous panels, there are so many things that comprise our Halo Fest agenda that you will undoubtedly miss a few of the festivities along the way. In an effort to minimize your losses, I’ve decided to share my top five tips for maximizing your celebratory experience. 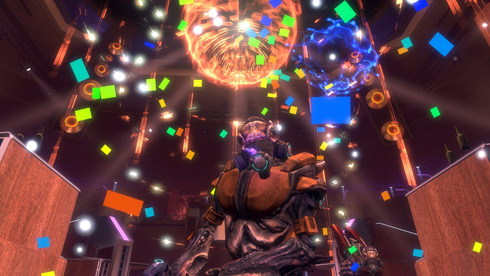 bs angel's Guide to Having the Best Halo Fest Evar

Have a clear-cut strategy.

We have 12 panels, six tournaments, five playable Halo: Anniversary maps, and many more things I’m entirely too lazy to type up, all demanding your undivided attention. So, unless you plan on cloning yourself, you should schedule your time accordingly. Decide which things are most important to you, block off that time either on paper or in digital form, and then move on to the next batch of activities you hope to fit in. Certain things—like ogling the awesomeness that is the Weta Warthog or taking multiple trips down memory lane with all of the individual Halo titles—can be done at any time. Other things, though, are available for one hour and one hour only. I’m pretty sure there’s a joke in there somewhere, but I’m not going to touch it. And yes, that’s what I said.

Let’s face it: the last thing you want to do is set aside significant amounts of time for eating and drinking. Unfortunately, though, you still need to invest the time in the life-sustaining basics. An easy way to multitask is by doing the aforementioned necessities while you’re in line. PAX recommends securing your spot for upcoming panels at least 30 minutes in advance. I typically set aside at least one hour to guarantee admittance. Grab some food, and use that down time to satiate your body. Just make sure you keep some gum in your pocket. Nobody wants to be assaulted by the aftermath of your garlic-laden lunch later in the day.

Whether you wield a man purse, wear a backpack, or have the deepest pockets known to mankind, there are a few things you should never leave your hotel without: personal identification, your cell phone, a camera, at least one form of payment, and numerous breath-freshening agents. I’ll also divulge a teeny tiny secret about something I bring with me to conventions: deodorant. If your underarms are as noxious as mine, freshening up throughout a long day is mandatory. Every few hours I take a trip to the ladies room, dampen a soap-drenched paper towel, and clean the hairy enclaves that are my pits. After a fresh application of deodorant, the only lingering scent is flowers. Well, flowers that have been dipped in a steaming pile of BO. But still, it’s better than the odor that existed before. Trust me on that.

You will be on your feet for the majority of the extended weekend. And if your backside prefers being planted firmly in a chair as mine does, your poor, underutilized feet will be beyond tired by the end of each day. Minimize the pain by wearing sensible shoes. Sure, your brand new thigh-high boots are gorgeous. But if your feet begin aching after five seconds of walking in them, imagine how they’ll feel after three days. Definitely not worth it. For the record, I’ll be wearing sneakers the entirety of Fest. Yes, they’re obnoxiously pink and sparkly, but they’re sneakers all the same.

You are going to have the opportunity to meet an unbelievable amount of people. Everybody from the faces behind your favorite video games to those that watch your back while traversing the online battlefields. If you see someone you recognize—either by catching sight of their handsome mug or perhaps a badge that reveals their virtual identity—say hi. Take it from me, you’ll regret it if you don’t. The only person I don’t recommend doing that with is me. If you think reading my words week after week is akin to torture, wait until you meet me in person. I’ve been told people turn to stone after seeing me in their nightmares. And not just when I wear my hair curly, either.

Beyond the tips, something else that may be of interest to those of you attending will also be helpful to those planning on being there in spirit only. IGN—barring any dreaded, unforeseen technical difficulties—is planning on live streaming the big three panels (Halo: Anniversary, Halo Universe, and Halo 4) both on their website and also within the walls of Halo Fest. That’s right, whether you’re sitting on the comfort of your couch or you’re within the Halo Fest space itself, you’ll be able to watch the three main panels in all of their Halo glory. High five for streaming live! 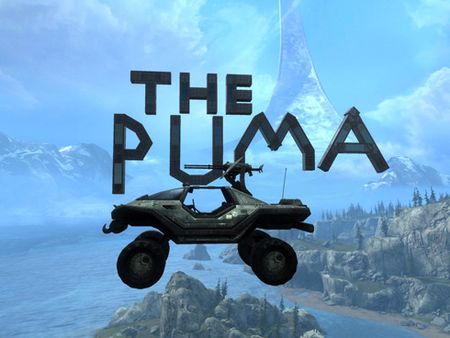 Even though it doesn’t rhyme, another thing that deserves a high five is the official arrival of the Warthog. A few days ago, I had the totally hard job of going to the warehouse to confirm its arrival. Yes, I got in my car and traveled almost 20 air conditioned minutes to make sure the real life anti-infantry vehicle survived its trek across the ocean. Now seems like a good time to mention that you people are lucky I’m so dedicated to my job. Not everybody would make a sacrifice like that, you know. But me, well, I’m willing to go the extra mile to see a fully functional vehicle from the Halo Universe. You can’t ever say I haven’t done anything for you now. Just FYI.

Anyway, after my not-very-long drive to the warehouse, I was greeted with an absolutely glorious sight. I’d like to tell you how it felt to turn the corner and set eyes upon the real life version of my favorite Halo vehicle but alas, a mention of the goosebumps that quickly spread across my arms is the closest I can get to describing this surreal experience. It was in this vehicle, during the last level of CE, that I fell in love with Halo. And that emotion came rushing back the second I set eyes upon its carefully crafted descendant. My words are not doing this incredible replica justice, so I will instead offer your hungry eyes a picture depicting the exact moment the Warthog and myself became one. Don’t ogle ‘er too much, though, because I’m definitely the jealous type. PS: You can almost see me over the turret. Almost… 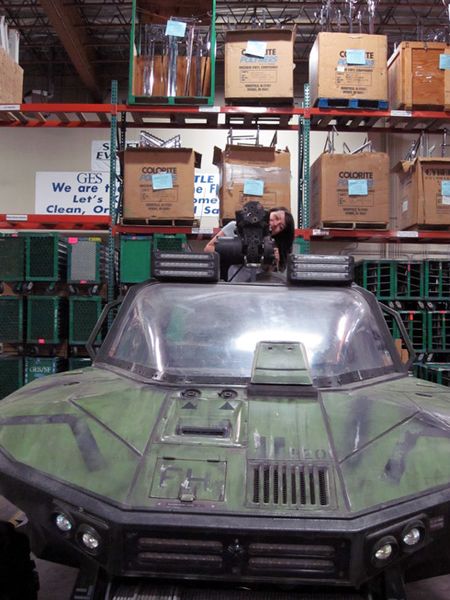 My dear coworker David Ellis didn’t have the opportunity to ride shotgun in the ‘Hog. However, he did have a different, equally amazing experience for which your ears will directly reap the benefits.

From the smooth talking man himself:

As you've already noticed from this Bulletin, we're in full-on Halo Fest mode here at 343. So in the spirit of celebrating the 10th anniversary of Halo: Combat Evolved's release, we welcomed former Bungie Game Design Lead Jaime Griesemer to the Sparkast to talk about his experiences working on the seminal shooter for the original Xbox. As a huge Halo fan, it's rare that I learn new things about the titles I've played through dozens and dozens of times. It was a fantastic experience to be able to pick Jaime's brain for an hour and hear some new behind-the-scenes stories about the creation of the first Halo. You can download and listen to this very special pre-Fest episode of the Sparkast here (n° 006). Remember, if you'd like to have new episodes of the Sparkast delivered to you every time we post them, you can subscribe via Zune, iTunes or RSS. I now return you to your regularly scheduled Bulletin, already in progress.

David’s defenses must have been down last week because he graciously agreed to let me take part in his regularly recorded shenanigans. And let me say he ended up making the right decision when he cut that segment. Perhaps you’ll hear the screeching that is my voice sometime in the future. For this particular episode, though, Jaime’s dulcet delivery will definitely be the music to your ears. 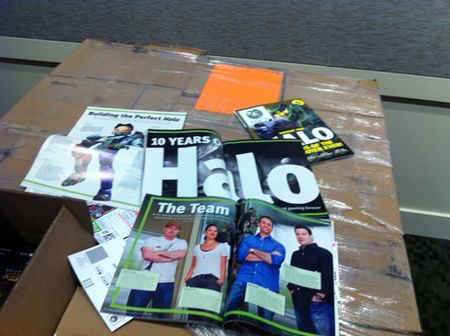 While we’re excited about Halo’s big bash, it turns out OXM—or Official Xbox Magazine as they’re also known—is pretty pumped about the festivities, too. I’m not going to post any spoilers, but let’s just say this is one issue you’re definitely going to want to pick up. Since a picture speaks a thousand words, but more importantly, saves me from typing that ridiculously huge amount, here’s the cover to whet your ten-years-in-the-making appetite. 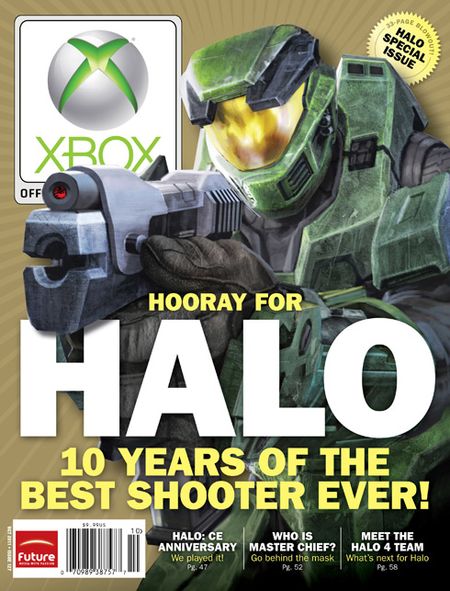 And with that, I bid you adieu. Until Halo Fest or the next magical reoccurring humpday…

PS: I don’t have a Friday Caption Fun image for you this week, so I offer you this Grunt plushie picture in its place. Flipyap (or is it Yapflip?), along with a few thousand of his closest friends, look forward to potentially going home with you after Halo Fest! 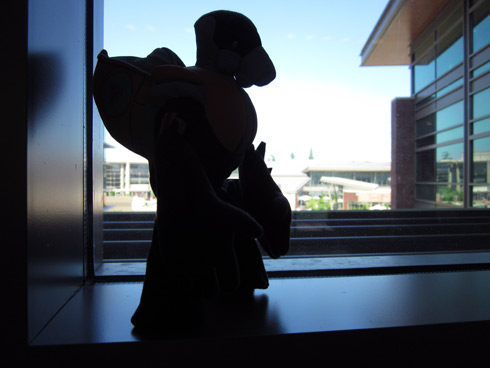