First, Thanks for this interview. We are certainly one of the biggest fan-site of Halo in France and we are fond-of this universe. Take a little time to discuss with the next studio that will bring us a product of the Halo licence is an honour.

In the past, you have done the series of Ages Of Empires (pretty good games), How Halo Wars is it different of these games and RTS in general?
Well, Halo Wars is Ensemble’s first Xbox 360 game, and the first game we’ve designed from the ground up for the console and to be played with a controller instead of a mouse and keyboard. There are challenges in bringing the genre to the 360 but at the same time we wanted to bring the excitement of the RTS genre to the 360.

Many people are balk to play an RTS with a game-pad. How did you do to make the game playable with a game-pad ? And what do you want to say to people who didn’t want buy the game because it is on Xbox and not on computer?
We spent the first six months of the project looking at the controller and it could work with an RTS game. I think our control scheme actually works better than the keyboard/mouse combo and that we have really gotten past that barrier. I can’t wait for everyone to pick up the controller and try the game, I don’t think it will be possible to convince some people until after they try it.

Do you have the ambition to make your game a part like another of the Halo series, or to distinguish yourself?
I think we want to be a Halo game first and foremost. That means to us UNSC, Covenant, story, Spartans, vehicles, and a pinch of that Halo humour we see in the FPS games. We want to present a familiar universe to those that have played the previous 3 Halo games, we really love the universe.

At which state of progression would you situate the current development of the game?
Right now we’ve been spending a lot of time looking at the in game units and how they interact with each other, making sure that there is more to the game than just having units move and shoot, providing depth to the units and making each of them useful to the player in a different way. It’s an exciting time!

We saw in the demo video that the physical engine would allows vehicles jumps over cliffs, have some other uses for such an engine been planned?
We’re still working on when and where that will work. I still love that feeling.

Bungie is well known for their great number of myths, traditions and events. What about Ensemble Studios? Does Halo Wars have some aspects or easter eggs that were made for the most hardcore fans of the series? Is the game mostly developed for the players of the Halo FPS, or for a larger public?
The game does have secrets you can find. As I said, we love Halo too, so we wanted to make a Halo game, but at the same time we want to bring new people to Halo.

When the game will be released, will there be a collector version of it? What type of bonus content would be included in?
I can’t answer this. :)

What is the current mood at Ensemble Studios?
We actually track mood through our daily playtests. The mood yesterday was “positive”.

Have you planned a public beta for Halo Wars? If it's the case, do we will can participate?
We’ve been focusing on our daily internal playtests and using that feedback loop and that allows us extremely fast iteration and testing of features. At this point that kind of internal turnaround and feedback is still very useful to us so we’ve not looked beyond that.

Have you integrate some characters or vehicles that aren’t in the Halo series?
We have new characters and new vehicles. Our game takes place aboard a ship called “Spirit of Fire” and it’s full of new characters. There’s a few easter eggs in there for die hard fans too if they follow the story carefully.

Which would be the playable races in the final game? Is there any chance that the flood could be a race present in the game? Would they be playable?
We’ve only talked about the UNSC being playable.

Will the scenario of Halo Wars bring some new important elements to the Halo universe?
We’re set in the year 2531, 5 years after the war with the Covenant started. That is a very exciting time in the Halo universe, the Covenant are at their most evil, and there is no thought of splintering (the story of Halo 2/3) so it’s a great time to see some of that backstory.

How long should the solo campaign last in the final game?
Too early to say exactly. I love games that I can finish though.

What will be the principal themes of the soundtrack? Will they be close to the music of the original series, or more original?
Well there is quite a strong theme in the Halo games and that is there in Halo Wars, but we’ve also got new characters, new aspects of the universe and a new story so we have a very extensive musical score that accompanies the game.

How did you manage to make the Spartans a playable unit, coherent with the Halo universe but still being balanced units?
The important thing with the Spartans is to make them the coolest unit in the game. That frees us to do a lot more than just give them bigger guns. 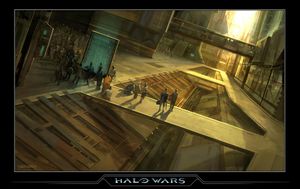 We saw some artworks of Halo Wars recently. One of them really impressed me and gave to me a different point of view of the Halo universe. For the first time we get to see a human colonial city, with civilians in distress. I believe Bungie work in co-operation with Ensemble studios, will Halo Wars give us a more global approach of Halo universe, maybe darker?
That was all Ensemble. We worked hard at wondering what a colony would feel like under attack from the Covenant. We wrote blogs of newscasters, information sheets from the government on what to do and that set a lot of the mood for the team. I think we have a really good vibe there, maybe it is a little darker, but it’s still Halo. 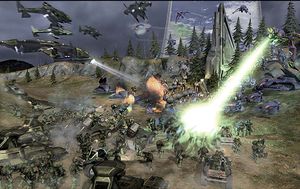 On a recent screenshot we can see a fight between Covenants and Humans, as usual… But we can see a Halo in the background, 20 years before the human discovery of the first ring. Just one thing, what the heck?
Yup. Wait and see.

What will be the maximal number of players in an online play?
We’re still working on this.

In a recent interview, you have said Halo Wars will purpose game around 10~20 minutes. How do you do to make that because RTS need time to create units, buildings, etc? Can we be able to choose games more long?
Some games go longer, we want the average game to be around 20 minutes. 10 minutes is REALLY quick. I’ve seen games go 45 minutes and still be awesome games.

The multiplayer maps are surely on Human or Covenant colonies, how many planets the game consider?
We’ve not talked about this yet.

Can we be able to play in multiplayer on an offline mode (one console, two game-pad) ?
You can play against the AI in skirmish mode. That’s a large component of the game.

Thanks for this interview